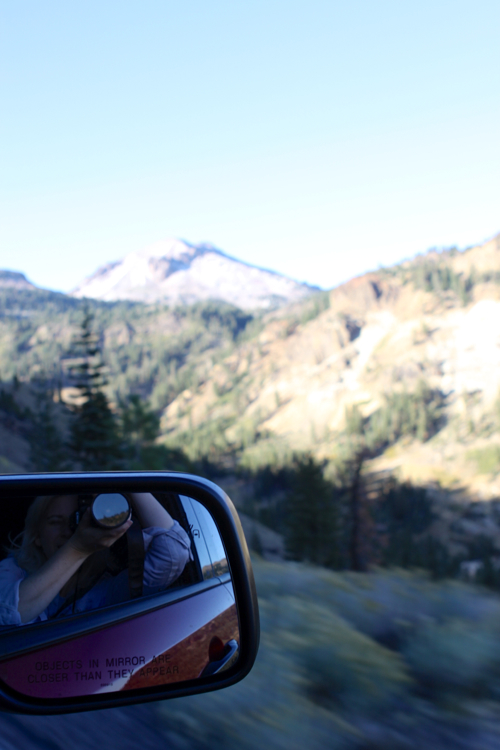 This content was created in partnership with Ford to help make creativity a part of every drive.

It’s time for the Day Two report on our trip to Lassen Volcanic National Park. (You can find the Day One report here .) Oscar (he’s number four of six) is here as a Guest Blogger to help me out: 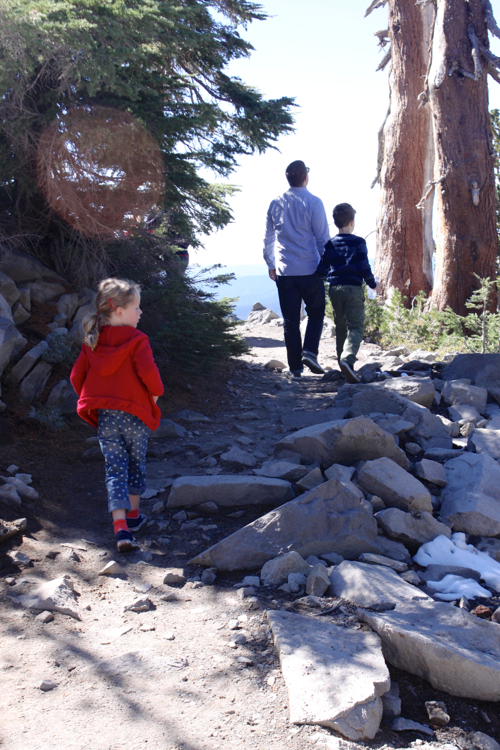 Hi! I’m Oscar Blair. I’m ten years old. I’m excited to be a Guest Blogger! I get to tell you about Day Two of our road trip. Day Two was mostly about hiking. And about throwing snowballs! (Oh. And I fell in a lake too! More about that later.) 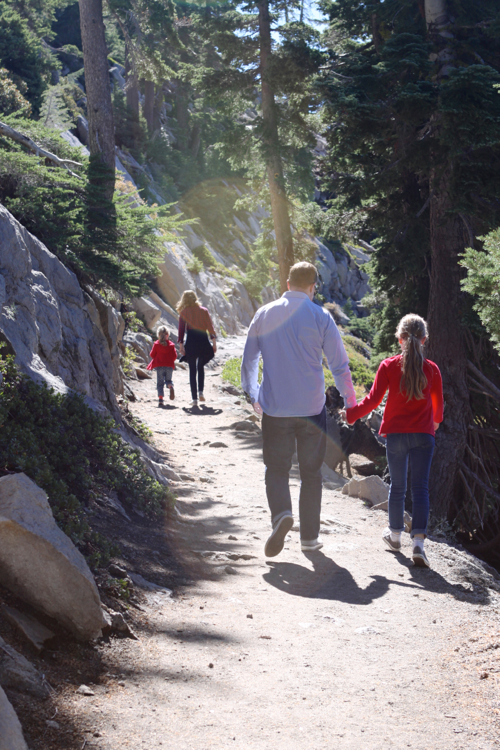 The hike we went on was to a place called Bumpass Hell. It’s called that because there was a guy with the last name Bumpass, and he was showing people around and telling them to be very careful, because the ground was unstable. Then, the ground gave way and his leg fell into one of the boiling mud pits. He got a serious burn! Ouch! Ouch! Ouch! 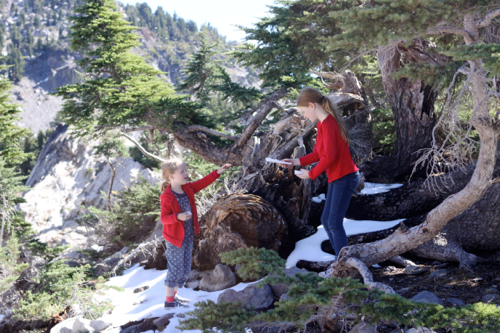 It was weird because there was lots of snow, but it was right next to boiling mud pits — in the summer! And it felt warm outside. I don’t know if it was old snow from last winter, or if there was an early storm. 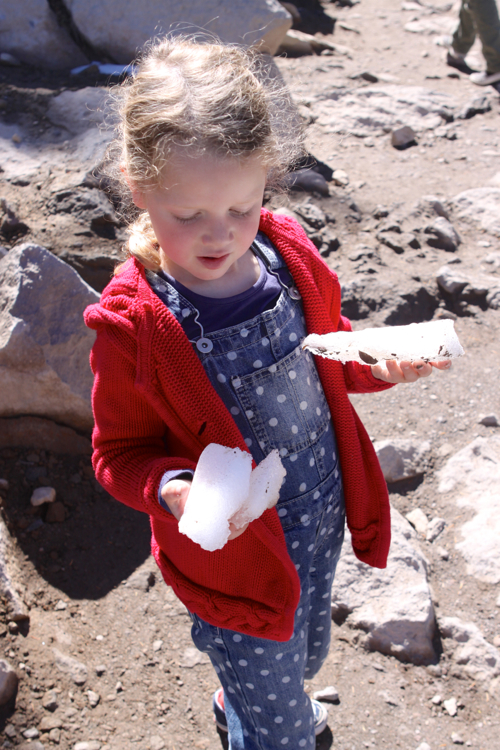 But June kept saying, “Hey Dad, are you hot?” And then Dad would say, “Yes!” And then June would throw a snowball at him! That happened like a hundred times. 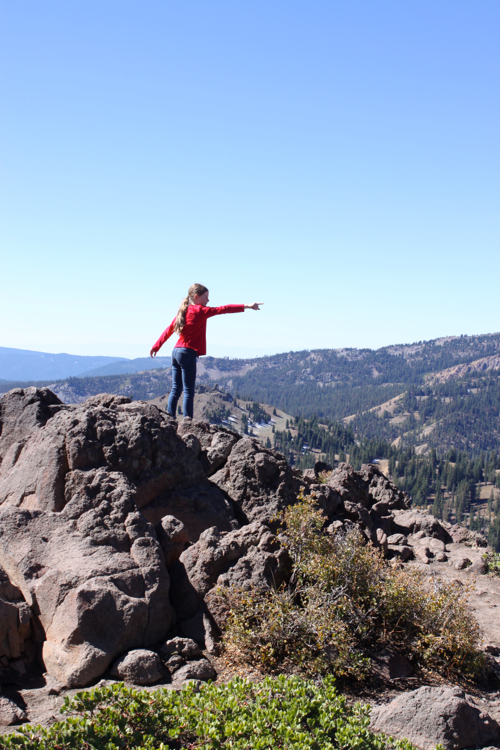 Betty was probably the biggest adventurer on this trip. She climbed everything! And she would run ahead on the trail and then run back. 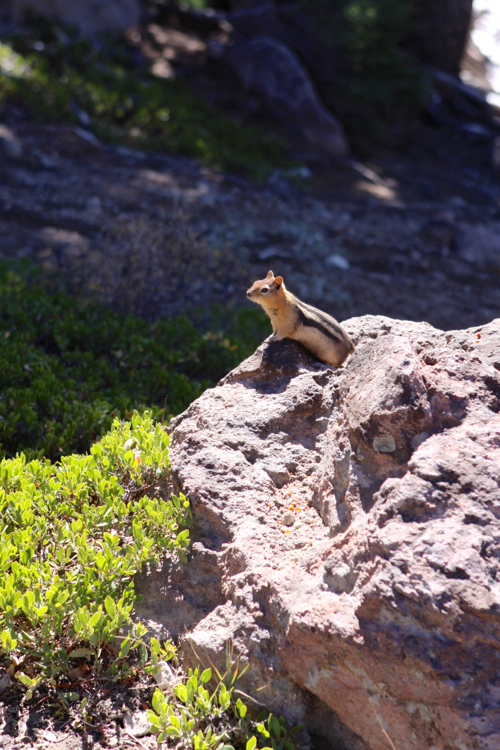 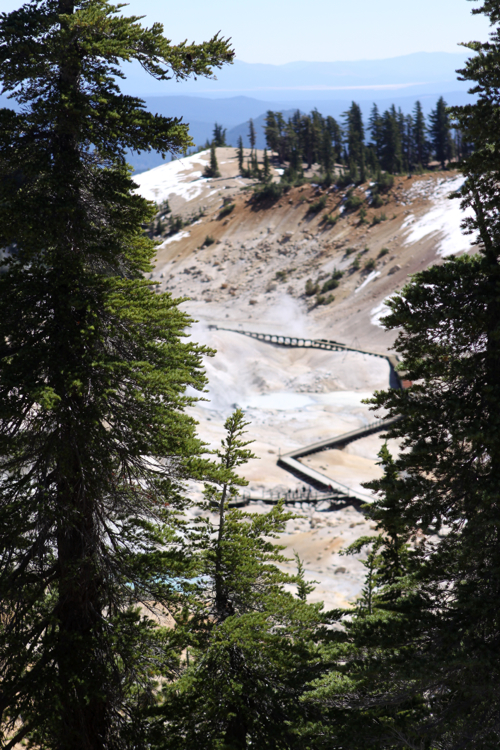 Once we got to Bumpass Hell — it was about a mile and a half to get there — there were boardwalks all over the boiling, steaming mud pits. So you could get a really close look, without falling in like Mr. Bumpass. 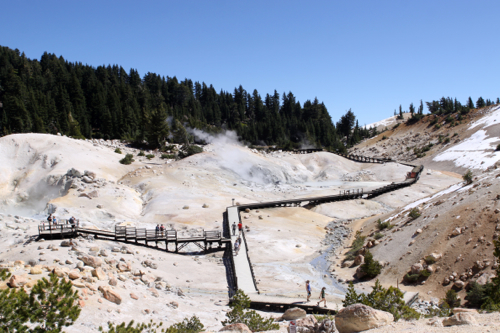 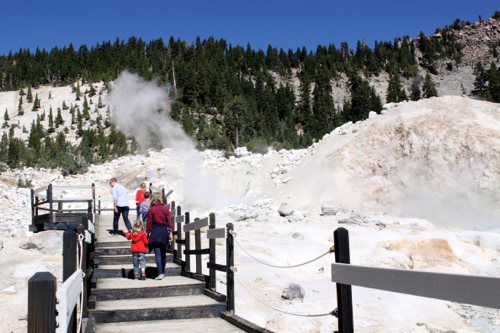 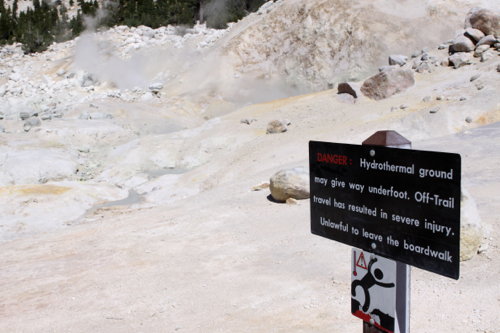 It’s so dangerous that it’s against the law to leave the boardwalk to explore! 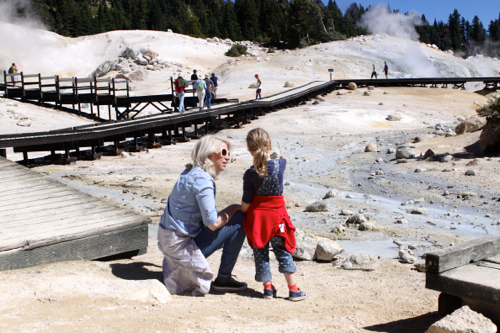 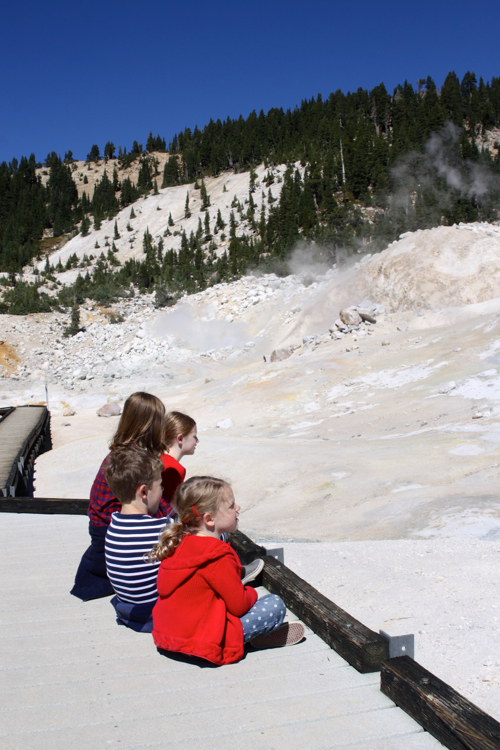 We threw a snowball into one of the mud pits that was boiling like crazy. Right when the snowball touched the pit, it disappeared. 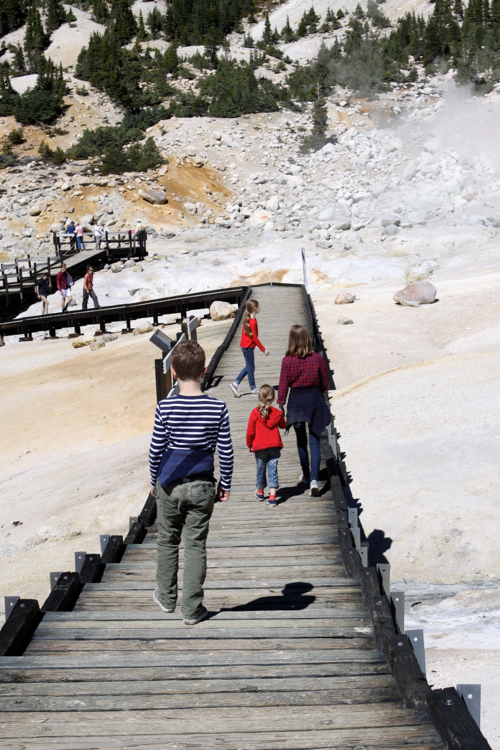 It looks so different there that it felt like we were visiting the planet Mars! Also, the whole place smelled like boiled eggs. But it didn’t make me hungry. 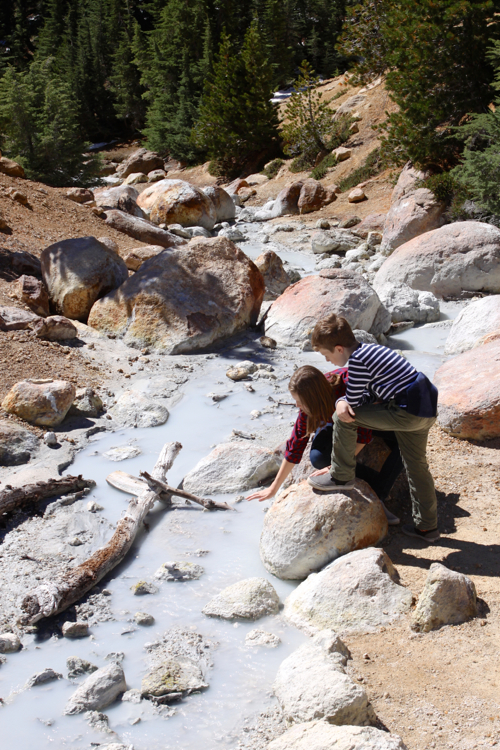 There was also this blue-ish, white-ish river that was coming from the mud pits. I touched it! But it wasn’t that hot. It was just warm. 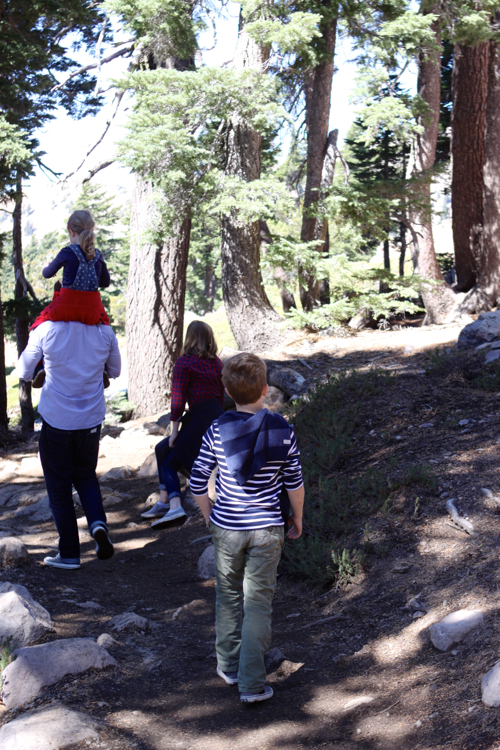 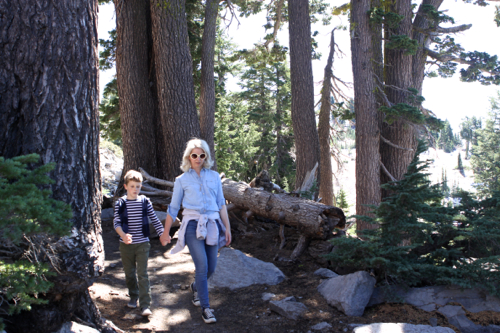 When we hiked back, we ran out of water, so we sucked on the snow instead. I didn’t like it very much. I thought it tasted bad, but Olive and my mom liked it. 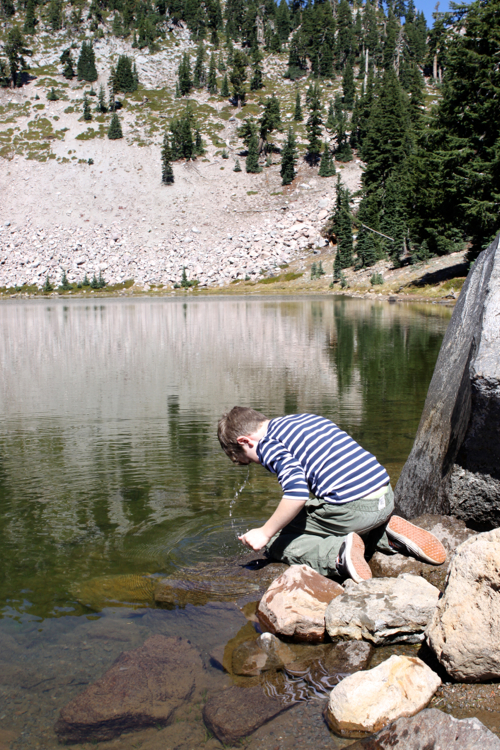 After we were done with the hike at Bumpass Hell, we were driving by Emerald Lake and decided to stop. We wanted to dunk our heads! First because it’s a tradition for our family to dunk our heads into a bunch of lakes and rivers, but also because we were hot from the hike.

Everyone took turns dunking their heads. 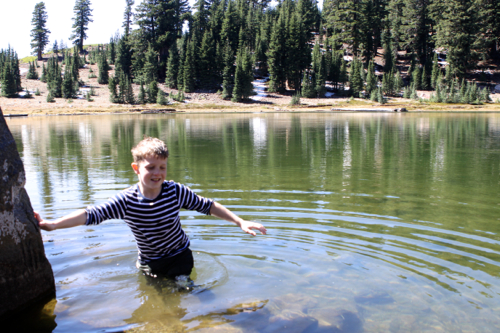 But I fell in! 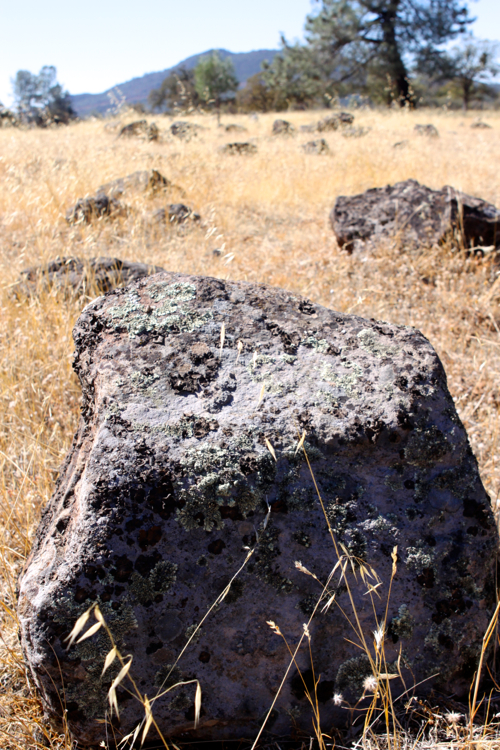 On the way home we stopped to look at the fields of volcanic rocks. There were so many and they went for miles and miles! I think they came from last time Mt. Lassen erupted. It was 100 years ago!

For the farmers that want to grow things in this place, they have to clear out all the volcanic rocks first. 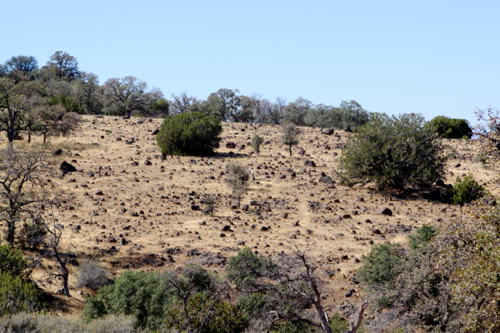 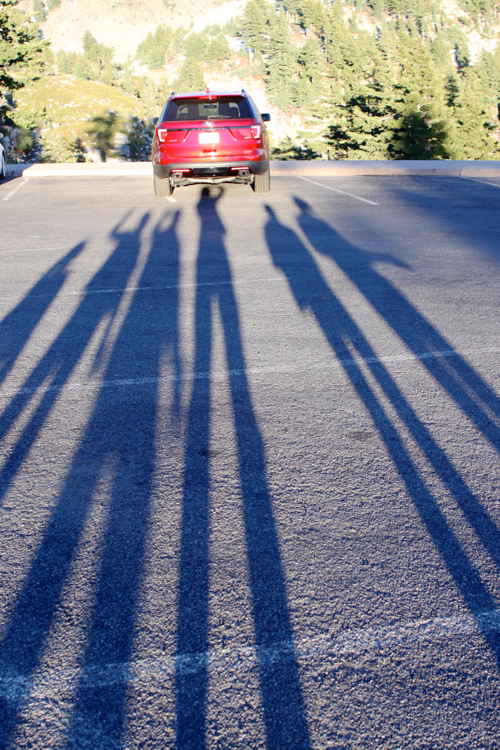 It was a good trip! And it was fun to go in a different car. The Explorer had a sunroof!! And the seats had warmers, and coolers too. They make your bum cold!

A big thanks to Oscar for reporting on this trip. I love all the details he remembers! It makes me want to get reports from my kids on ALL of our trips.

And a big thanks also goes to Ford for loaning us an Explorer for the drive. We had a great time!

Now I’m curious. What’s the nearest National Park to your home? How close is it, and have you ever been? Also, what’s the longest stretch you’re willing to go for a weekend trip? I feel like 4 hours is our max for quick trips. You?