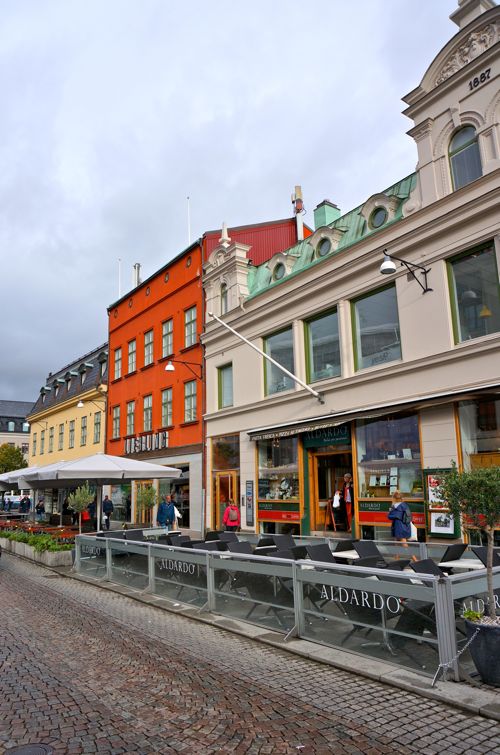 Friends, Gothenburg is easy to love! It’s the capital of West Sweden, and home to half a million people. The center of the city, where most of the tourist attractions are found is condensed and totally walkable, and there are plenty of public transportation ferries and buses and trams if you’ll be going outside the city center.

The oldest part of town was originally surrounded by a wide moat. And most of the moat is still there. In fact, tour boats cruise the moat and offer guides in several languages. Just outside the moat is a ring of green — a lovely park the surrounds the whole town! 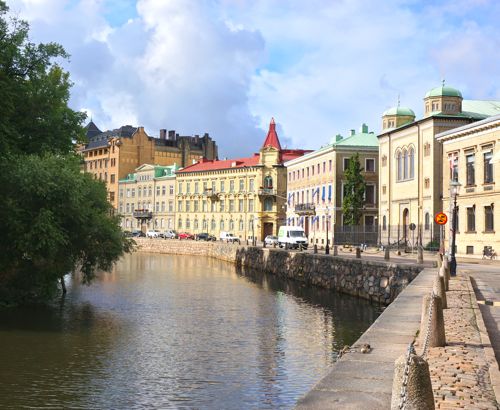 On our first morning in town, we took a walking tour, with a guide named Erika Svenske. (You can find her through the Gothenburg tourist bureau.) She was friendly and knowledgable and really fun to hang out with. We had a two hour tour and it wasn’t enough! 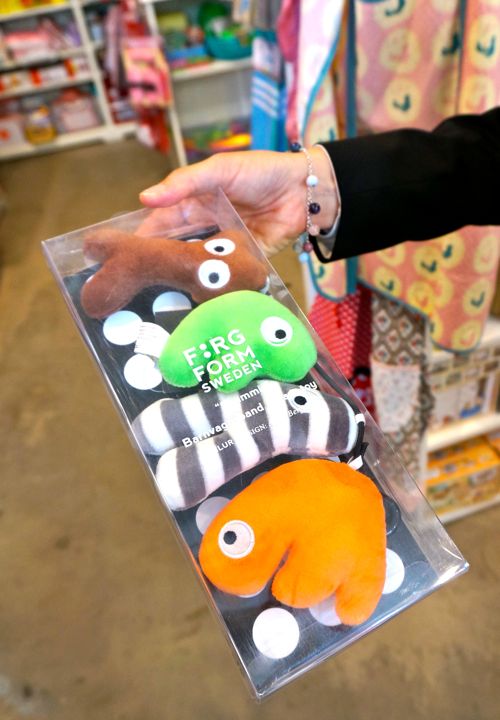 Knowing we were parents, she made sure to take us to two excellent toy stores so we could pick up souvenirs for the kids. One of the store owners pointed out the products of Swedish based OMM Design, and our guide mentioned that the bright little velour toys (pictured above) — made to hang on a stroller or carseat — are part of every Swedish babies lives.

Erika joked that if someone in Sweden fancied themselves a really good parent and intended to provide a wholesome childhood for their kids, it would translate to buying toys from Krabat and buying clothes from Polarn O. Pyret. : ) 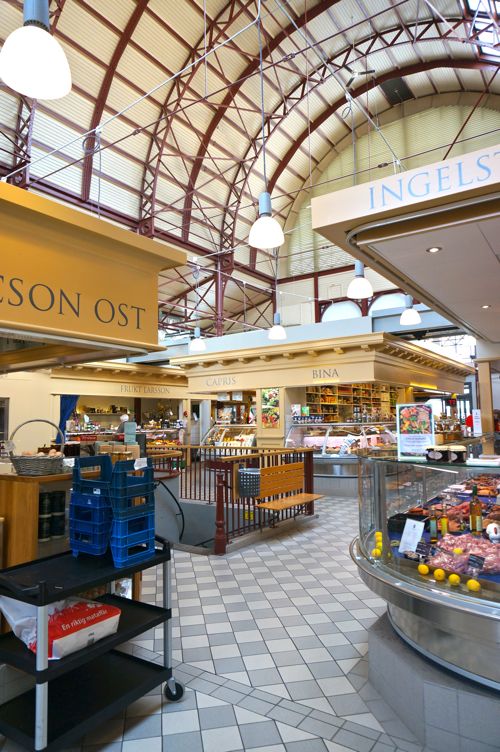 In addition to the toy stores, she pointed out all sorts of great shops. There was Saluhallen, The grand Market Hall — located right across the street from our hotel, and full of excellent local food vendors. A butcher. A baker. A chocolate treat maker. She said it was a good place to pick up an affordable lunch. 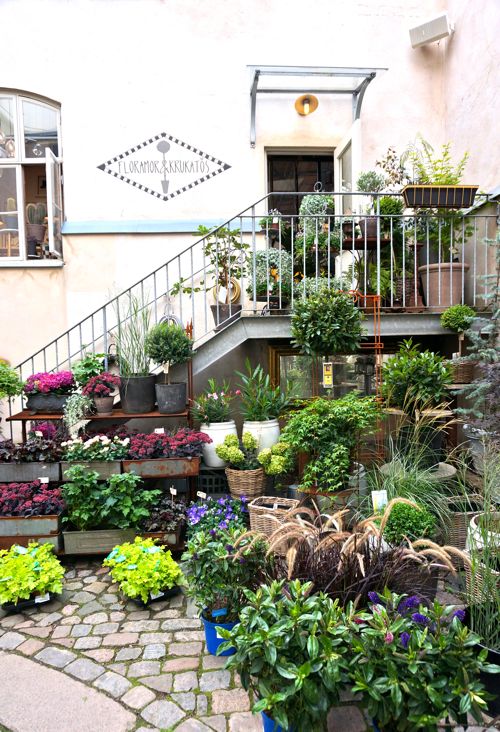 She took us down a little side street where we wandered out into a completely charming courtyard garden shop called Floramor & Krukatös. 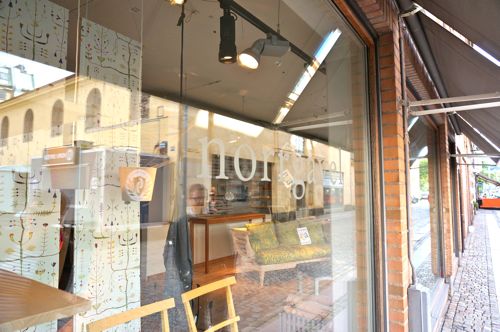 We peeked in the windows at Norrgavel, a top of the line, classic Swedish furnishings and homegoods. Expensive, but gorgeous. 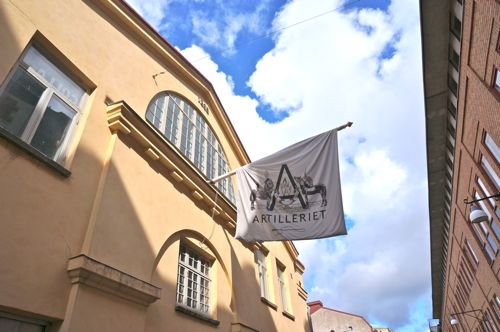 And she pointed out Artilleriet, which might be the coolest stop in town. 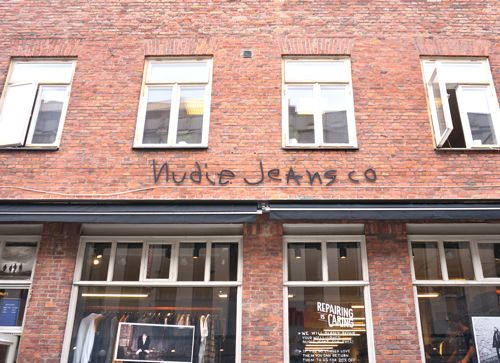 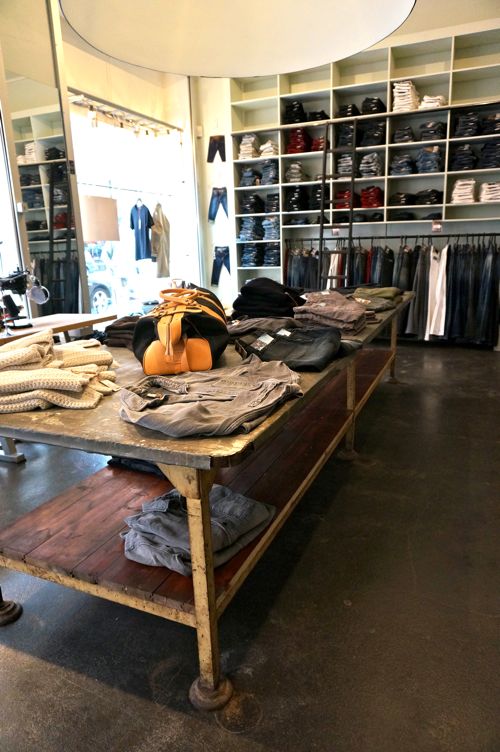 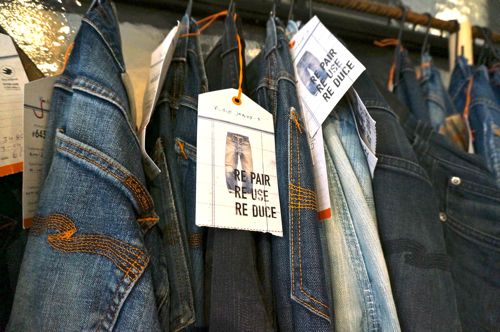 We talked about Nudie Jeans. Started in Gothenburg, the brand has become popular around the country. They offer free repair for any of their jeans. Or, if you’re done with a pair, you can hand it in for a discount on a future pair. Then, they will repair and resell the jeans you gave back. 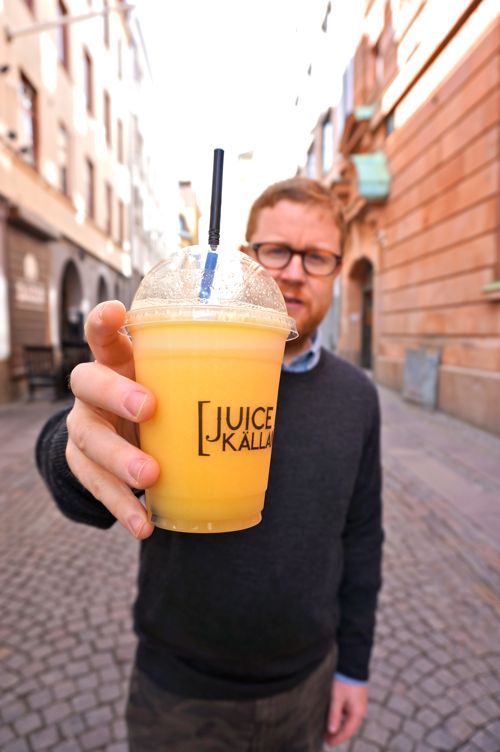 Then, at the end of the tour, we tried fresh squeezed juice concoctions from Juice Källan. 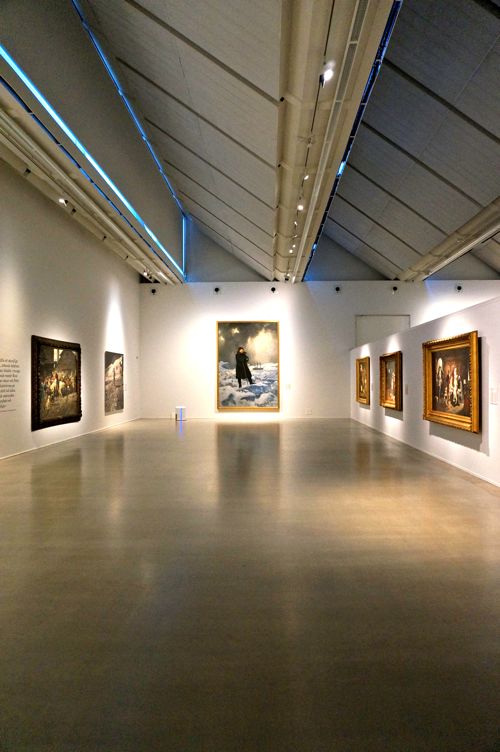 But it wasn’t just the tour. There was tons to do in the city. We went to the Gothenburg Museum of Art. It houses the finest collection of turn of the century Nordic Art featuring excellent artists from all over Scandinavia (Sweden, Norway, Finland, Denmark & Iceland). I loved the exhibit titled A Painted History, which is going on through September. During a tour of the museum, our guide mentioned that Swedish elections are coming up and that this exhibit was intended to get citizens talking about current events, and discussing political topics. 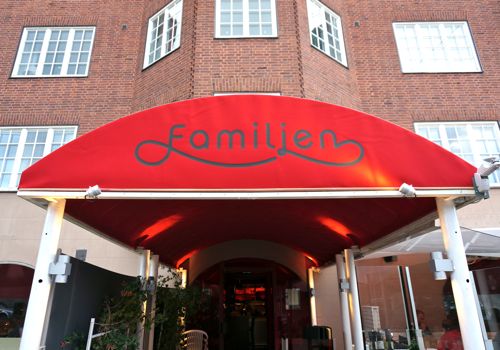 Dinners were scheduled at Restaurant Familjen and Barabicu. Familjen is all about wholesome, local ingredients. It has a feel that’s rustic and simple, but somehow sophisticated at the same time. Barabicu is a trendy new bistro with food inspired by North and South America (Latin America too!). 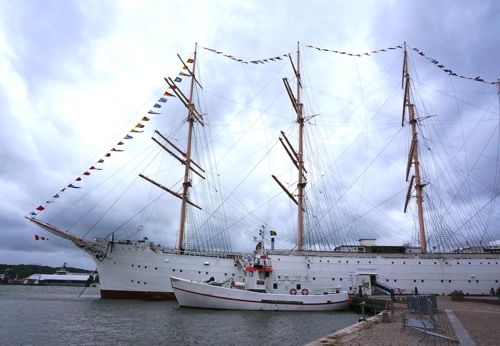 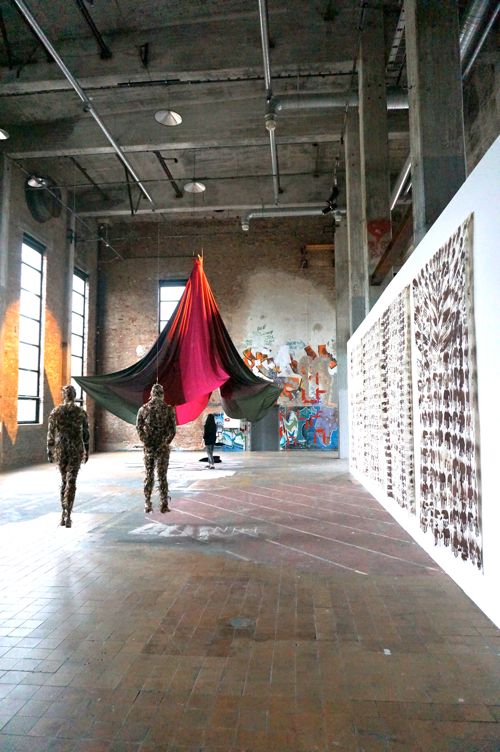 We took the ferry (part of the public transportation) to the Röda Sten Art Centre. The building used to be a gigantic boiler house that powered the nearby by industries. It was eventually abandoned and left to vandals in the 70s and 80s, then reclaimed as an art space — with exhibitions and workshops — in the 90s. The main exhibit space, called The Cathedral, is so massive it took our breath away.

Röda Sten means Red Rock. And nearby the building, on the edge of the water, is a large rock painted completely red. (I tried to get a photo, but the rain was coming down in sheets!) No one knows who painted the rock red. And no one knows who maintains it, but sometimes it gets a fresh coat. Every once in awhile it will be painted blue, but then the next day, it will be red again.

We ate lunch at the Röda Sten Restaurant — big portions of simple, satisfying food. It was a cold day when we visited and the hearty food was the perfect antidote. 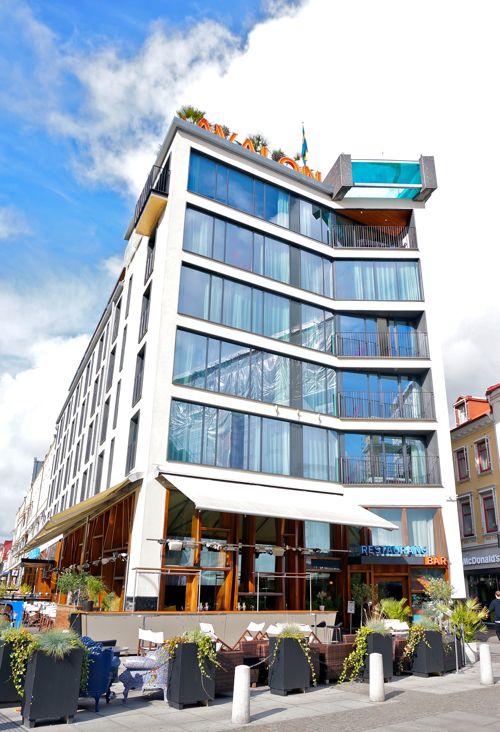 We stayed at The Avalon Hotel, which has this spectacular overhanging pool at the top. The hotel was designed with a feng shui theme. I don’t really know much about Feng Shui. If you asked me what it was, I would say it has something to do with how you arrange your room to get the best vibes — that would be my best guess! But whatever it is, this hotel definitely has it. We LOVED being in our room. It was small, but felt so welcoming and comfortable. And the location couldn’t be beat.

While we were in Gothenburg, we visited the Volvo Factory, and picked up a borrowed Volvo which we’ll be driving when we explore the coast and countryside. I’ve been thinking a ton about the Volvo visit and I’ll be writing up a separate post about it. 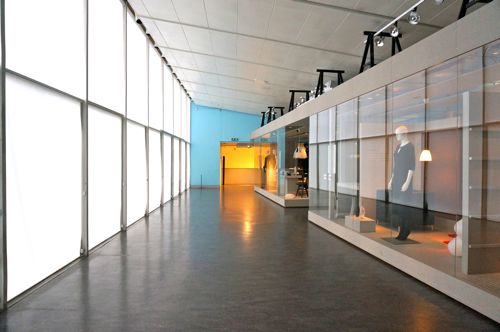 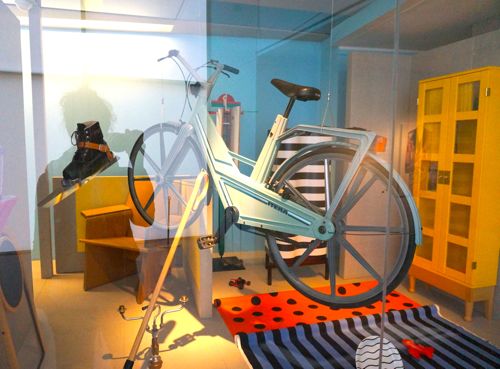 We visited the Röhsska Museum of Fashion, Design and Decorative Arts. I love this kind of museums— made to celebrate the everyday beautiful objects that surround us in our homes and lives. It seems especially appropriate in Sweden where everyday design is so elevated.

The museum is fun to wander around. It’s full of displays featuring furniture, dishes, bikes, computers, posters, textiles — all sorts of things! There was also a temporary exhibit featuring Picasso’s ceramic work, and another temporary exhibit called The Coolest Corner, featuring a juried collection of jewelry from Scandinavian designers. 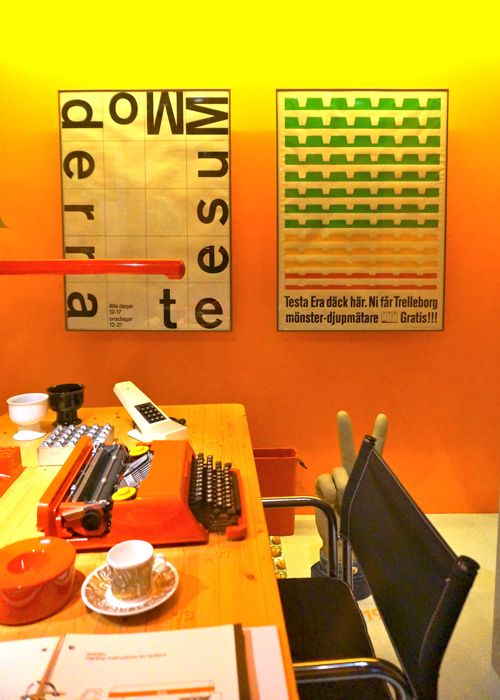 Speaking of that idea — of elevating everyday design — our tour guide in Gothenburg was totally open to our questions, and we peppered her with a million. After visiting so many gorgeous stores full of impeccable Swedish-designed clothing, furniture, soft goods, and toys, I said,
“I realize we will visit the prettiest parts of the city as tourists, but is there any part of Gothenburg (or Sweden at large) that is not cool? Or — I don’t know the right word… maybe tacky?” 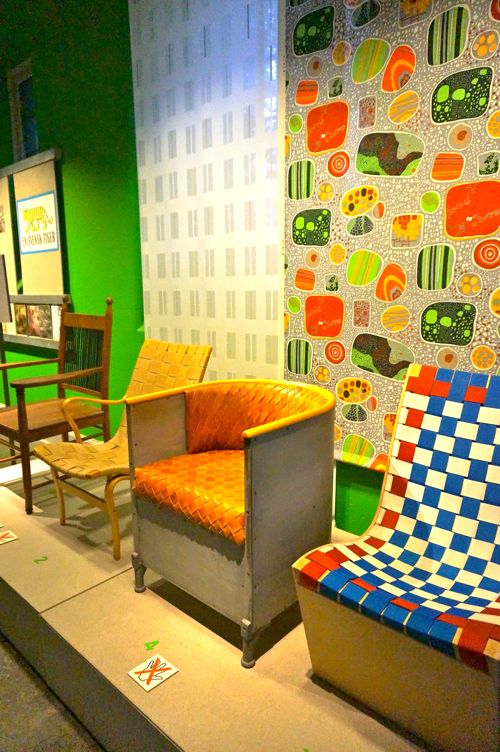 She laughed and said that outside the cities, there is less wealth, and certainly a typical working-class citizen would not be shopping in the design district we’d been walking through. So then I asked, where would a typical working-class family buy their clothes or furniture? And she said, well, at H&M and Ikea. And I had this “duh!” moment. How could I forget H&M and Ikea?

Both stores make good design available to the masses. Of course, I know this from first hand experience, as I’ve shopped for many years at both stores. And it’s true. Though they carry higher-end, organic options as well, the prices of many racks at H&M match the most inexpensive clothes stores around. At Ikea it’s the same idea. There are higher end items, but most of the pieces are priced to be accessible to all incomes. And that’s definitely part of the Swedish approach. Good design for everyone. 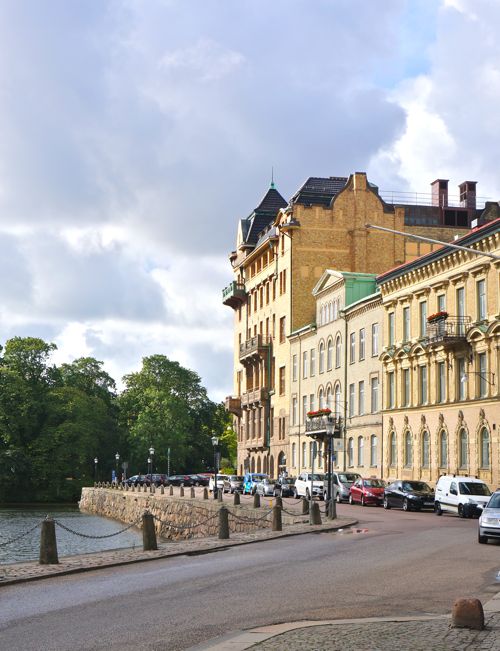 The reality of that blew me away. Design is such a priority in Sweden, even the citizens at the lowest earning categories still have homes full of good design. Fascinating!

What do you think of that? What would it be like to simply have no stores that sold ugly objects? How would that affect a population?

Edited to add: In a follow up to the discussion about H&M and Ikea, I asked if the wealthier parts of the population felt like shopping at those stores was beneath them, and she said not at all. Good design is good design wherever you find it.

P.S. — Now, we’re leaving the city and headed to the coast and countryside. Feel free to follow along on Instagram!