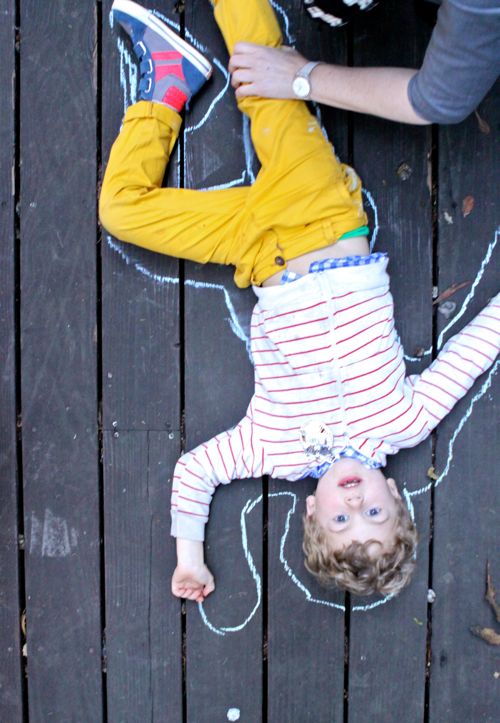 I’ve been thinking about birthday parties, and really, parties in general. We threw a themed party last month for our nephew, Roman, and it was delightful. I describe all the details below. The party came together really quickly, and having a theme made it feel like it was well-planned and organized and not last-minute at all. This was the first themed-birthday we’ve had since we moved back to the U.S.. In France, we did host a spa-themed-party for Maude once, but in general we adopted the local way of celebrating which was equally fun but less planned and definitely less themed. 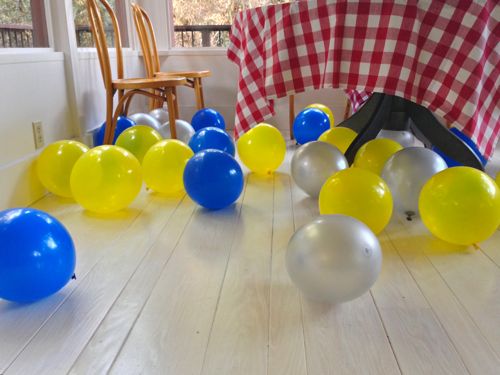 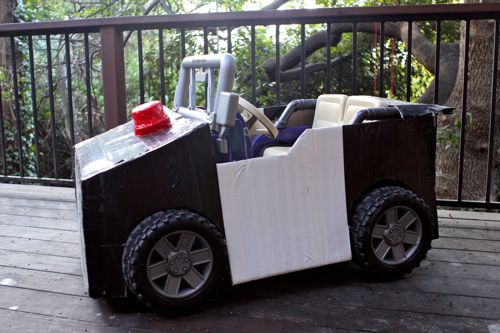 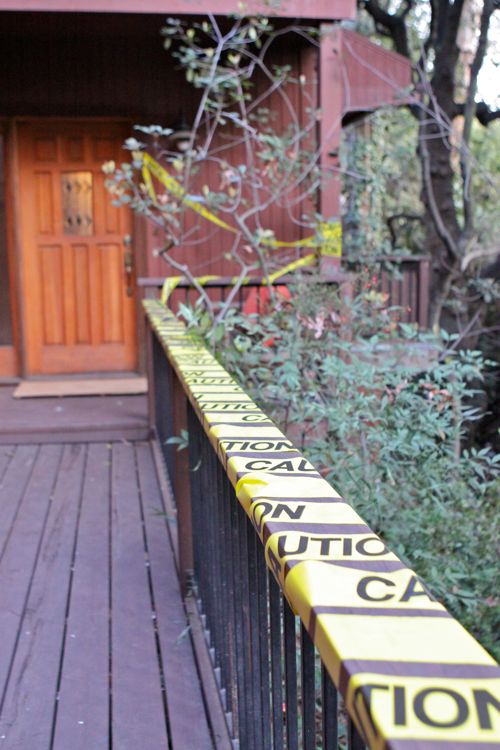 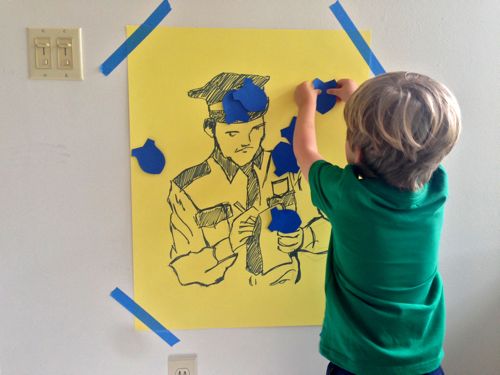 In France, we found that people would invite kids over for a birthday party, and that there would be simple party games and activities requiring little forethought — typically very low cost, like making leaf boats and floating them down the backyard stream, or playing Simon Says (Jaques a dit). There were simple decorations, maybe a little garland or a few balloons, but again, nothing really “themed”. Now this may have been because we lived in such a rural area. Perhaps in Paris, there are themed birthday galore, I really have no idea. But regardless, we truly enjoyed these simpler parties. They didn’t take much planning, you could put them together with what you had a home, and they were very low stress. In fact the only stressful part about them, was hosting in French when we weren’t very good at speaking. : ) 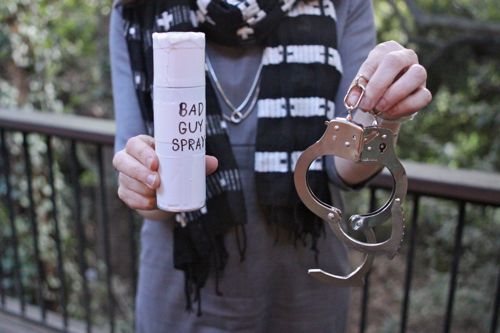 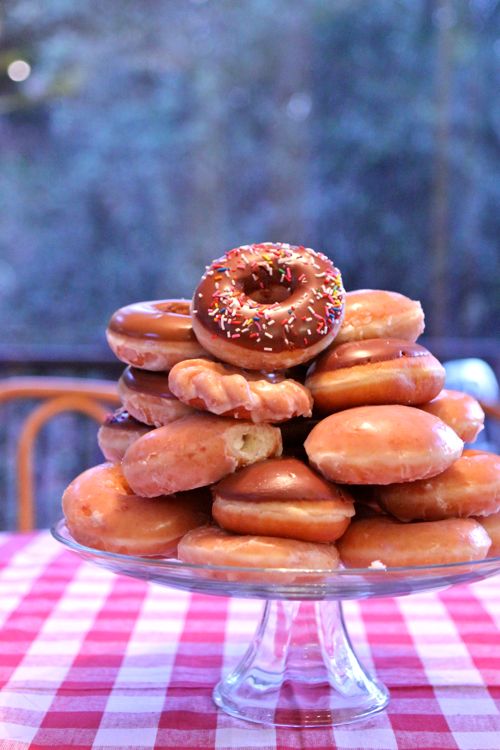 Both Betty and June have birthdays coming up next month, so I’ve been thinking about how we might celebrate, and wondering if we might try one of those simpler French-style parties. Then again, I do get a kick out of putting together decked out party with a theme as well! I suppose I could go either way.

What are your thoughts? Do you have opinions about the current birthday culture in the U.S.? I know that parties can get over-the-top quickly, and that some families feel pressure to put on a lavish celebration with rented bounce houses, and invitations for a hundred people. Others feel like the party needs to be Pinterest-worthy with every detail planned down the cupcake toppers. And I know others reject the whole birthday party culture out right and instead keep it really simple with family-only get togethers. How do you do it at your house?

Also, if you’re curious, or have a child who’s craving a policeman-themed celebration, you can find out all the party details below. 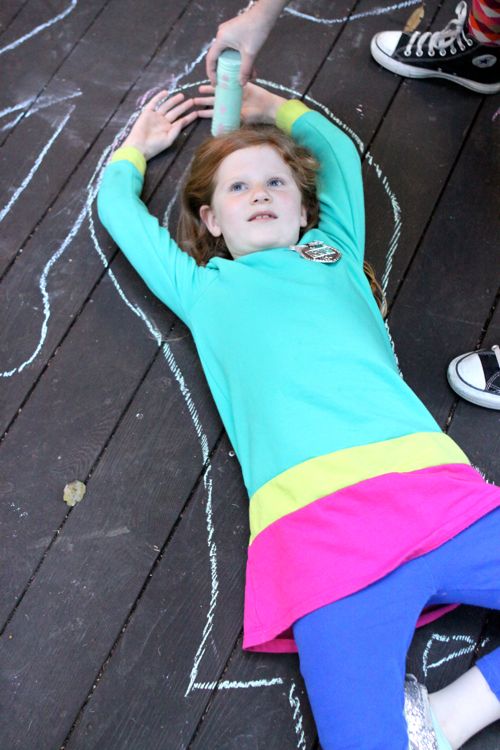 Last month we found out my sister Jordan and my brother-in-law Paul were trying to figure out how to throw their little son Roman a birthday party while their house was all torn up with a kitchen renovation. He had requested a policeman party, and Jordan was thinking she would need to postpone it for a few weeks. But I mentioned the party to my kids and their eyes lit up! We could host it here! We could decorate! We could turn the kiddie car into a police car! We could host it the next day — on a Sunday afternoon! And since there was no school on Monday (it was Presidents’ Day), the cousins could sleepover while their parents did more renovation work! Perfect.

So we made a plans and we ran errands: Party City for balloons, paper goods, police badges and handcuffs, then Michaels for duct tape and a piece of posterboard, Target for silly string and chalk, and finally Ace Hardware for a roll of caution tape. Done and done. 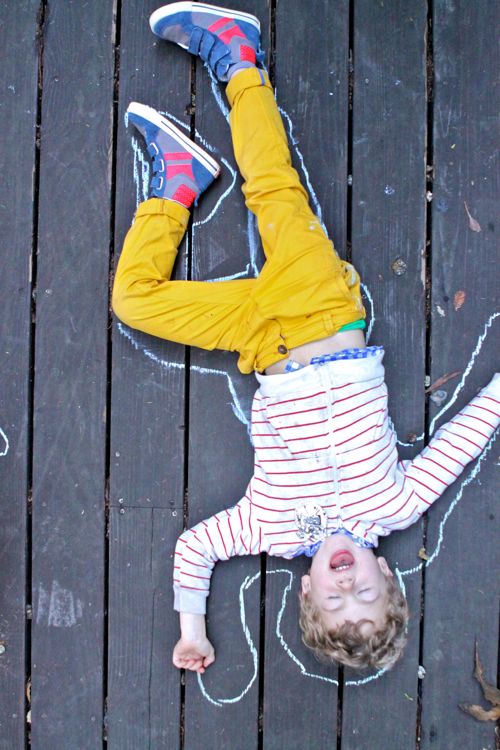 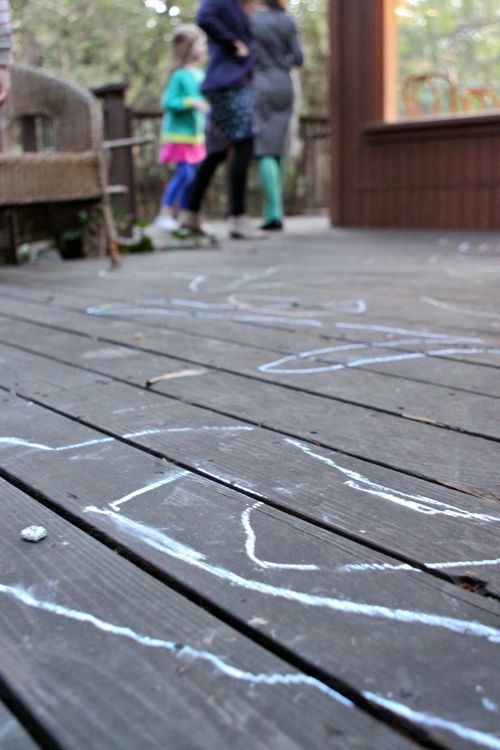 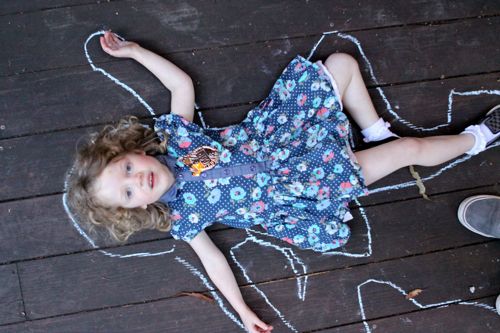 The party went like this: Guests arrived around 5:00 on Sunday. The house was decorated with caution tape and balloons in blue, yellow and silver. The kids put on their police badges and the first activity was chalk body outlines — totally morbid! — but the kids thought was awesome. I debated whether or not we should do it, but finally decided it was so old-school that it felt very pretend. So I got on board. 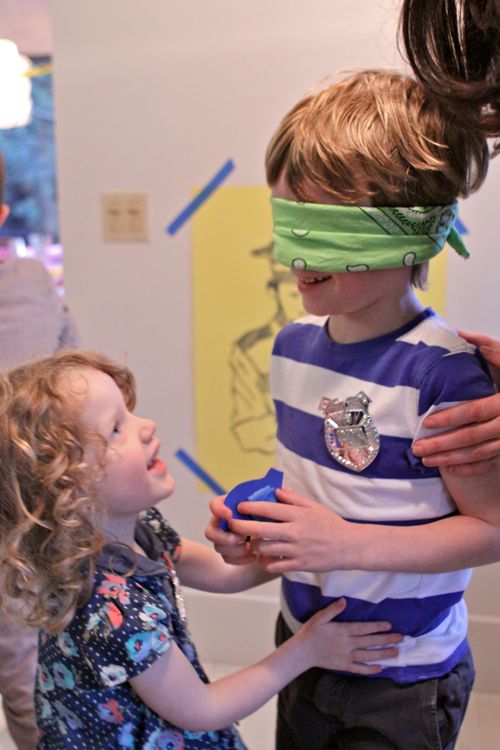 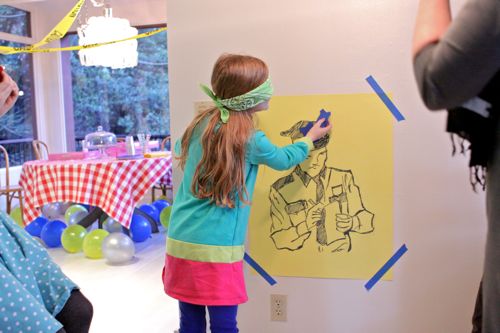 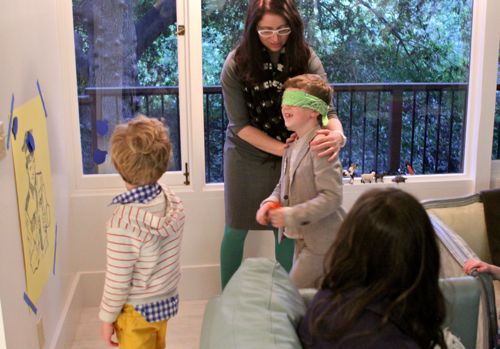 Next up was pin the badge on the policeman. I found an illustration online, then freehanded it onto the posterboard. Badges were cut from blue cardstock and pieces of blue painters tape were put on the back. 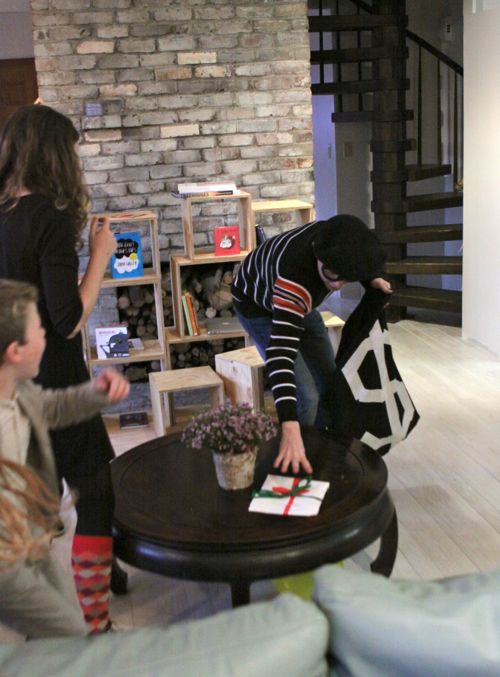 As pin-the-badge was ending, a Bad Guy ran into the room and stole the presents! Oh no!! 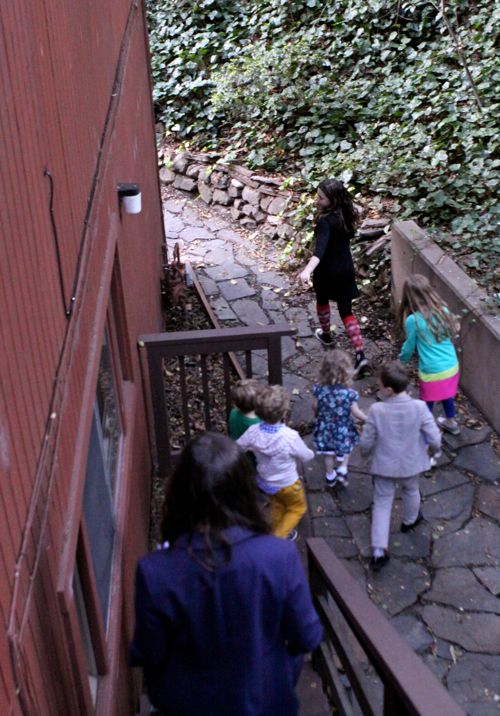 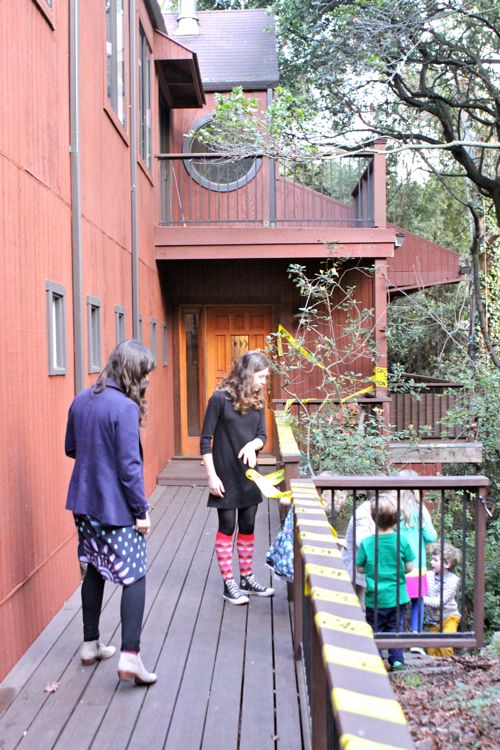 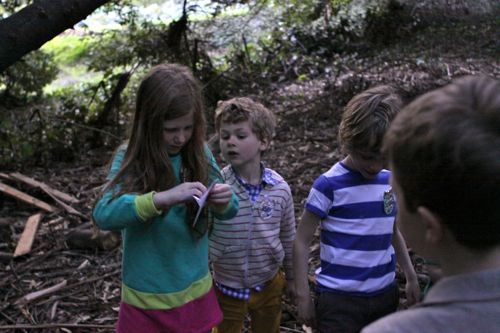 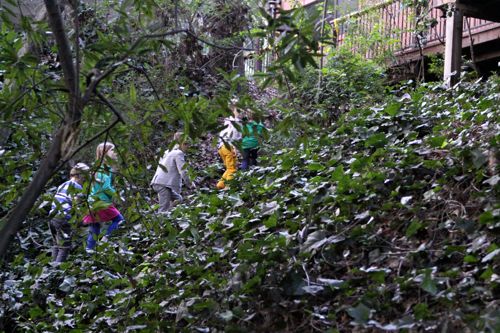 Luckily, he left a clue, and the kids ended up running all over the yard, and through the house, going from clue to clue on the Bad Guy hunt. 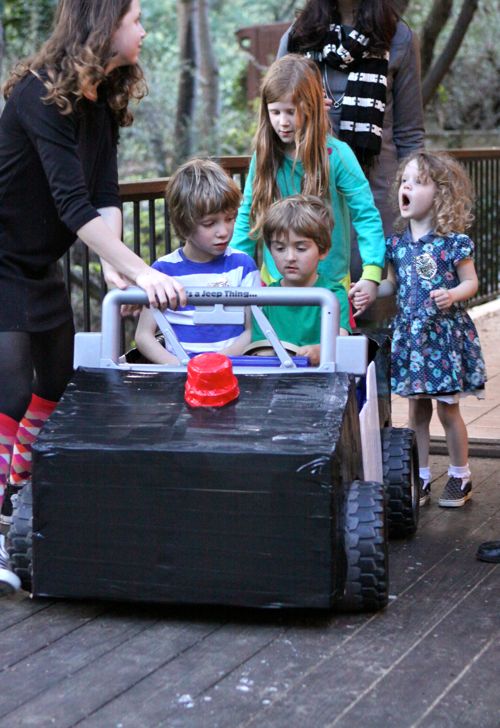 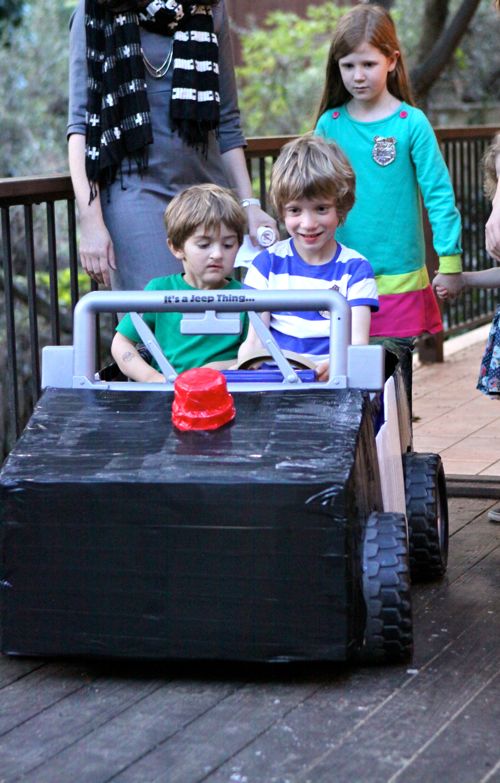 The last clue told the kids to get in the police car (transformed from a kid-size Jeep with cardboard and duct tape) and head to the back stairs. 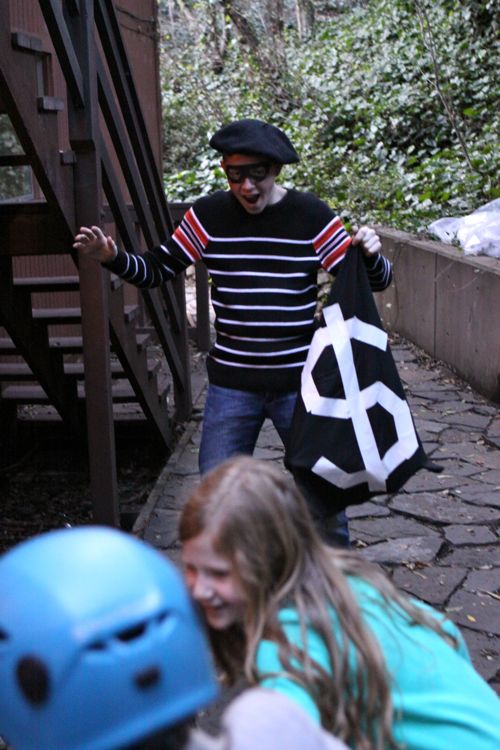 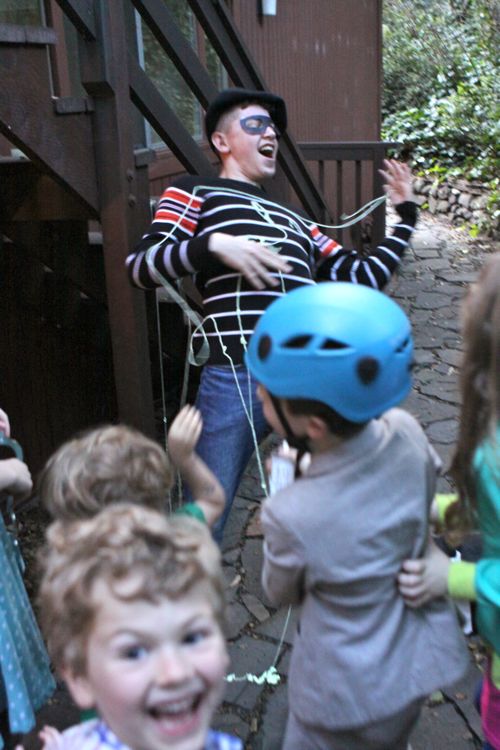 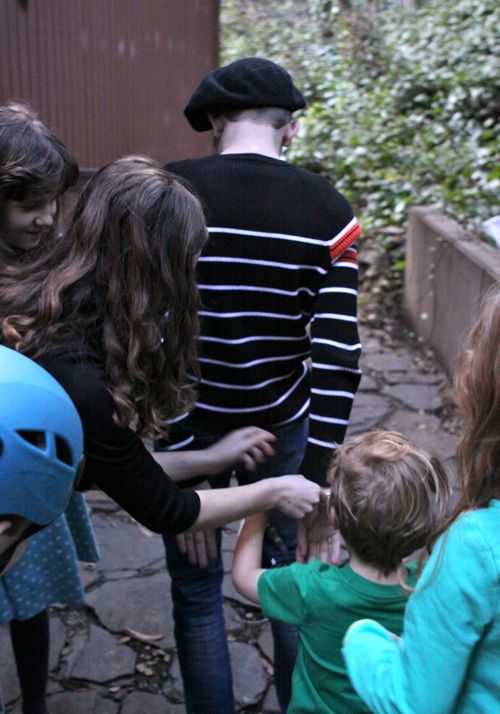 There they found the bad guy! Our heros sprayed him with Bad Guy spray, handcuffed him, and the gifts were saved! 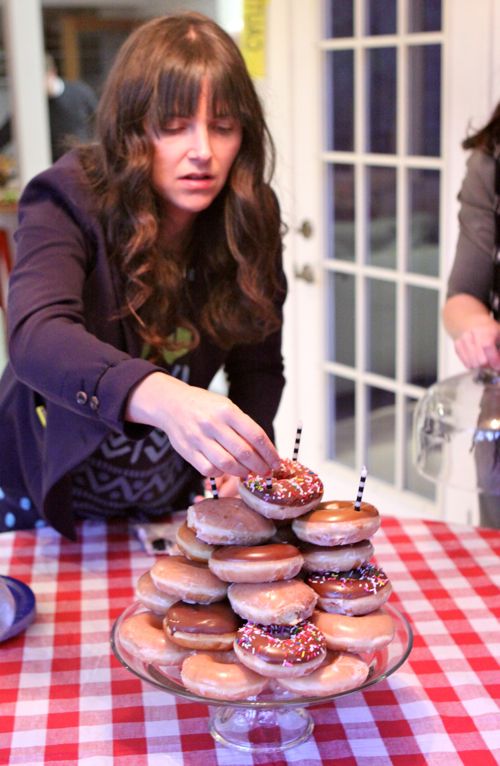 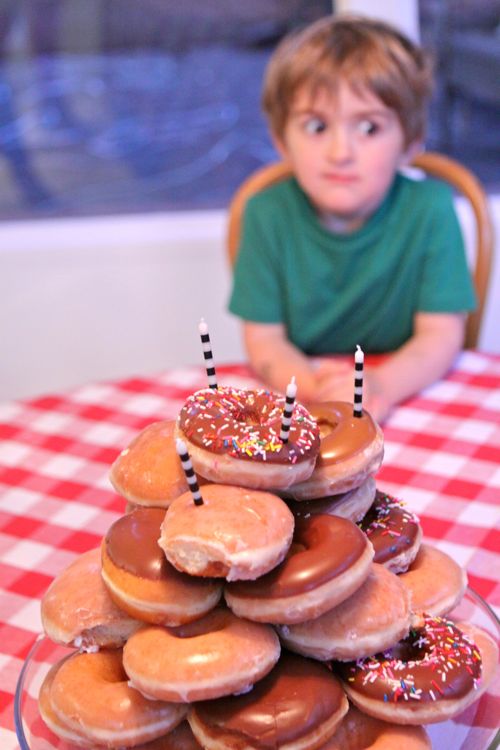 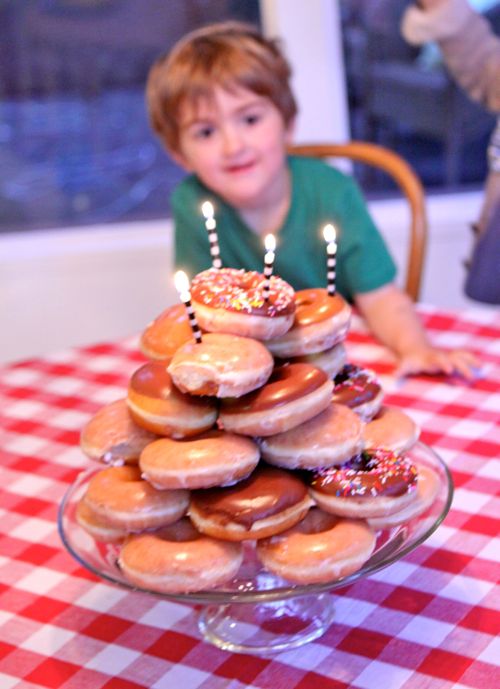 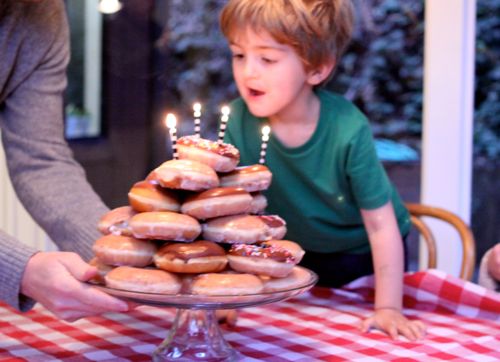 Next it was time for food. Taco salad for everyone, and a Donut Cake (because policemen love donuts!).

It was lots of fun. And my kids were so helpful putting it together. Maude blew up balloons, decked the porch in caution tape (the caution tape was Betty’s brilliant idea), and made the clues for the bad guy chase. Olive made the cardstock badges and the donut cake. Ralph played the bad guy and even made the bad guy mask. The aunts and uncles went home for the night and we tucked all the cousins in after a movie and slept in late on Monday. Everyone was happy.

P.S. — Speaking of birthdays, I love simple birthday traditions! Find some of our favorites here and here.