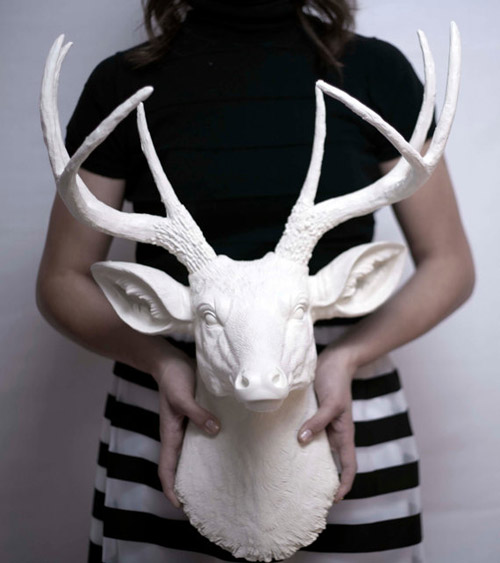 After I posted a Living With Kids Home Tour that showed taxidermy in several of the photos, I received feedback that some readers were upset. One wrote: How can you teach kids to be free, respectful and caring when half your walls have cadavers? And: There is no style in cruelty. Another said: Once I see dead animals/animal parts used for decor, fake or real, the house no longer looks cool.

Those are strong reactions!

My take: I’ve never hunted, I’ve never owned a gun, I’ve never purchased taxidermy (fake or real) for my home. But. I grew up with hunters — in fact, one of my very best friends in high school, Jandi Jones, had her own gun cabinet. And my town had a school vacation built around the annual deer hunt. So I’m familiar with how taxidermy fits in to certain cultures. And when I encounter taxidermy, words like “cruel” and “cadavers” don’t come to mind for me, but obviously they do for others.

The topic brings up all sorts of questions for me, as I seek for a more nuanced understanding about how people feel. Are you someone that believes taxidermy is automatically cruel no matter what, even if the animal died of natural causes? Does it make a difference if the taxidermy was found at a thrift shop or garage sale? If you’re a meat eater (I am), can you even be against taxidermy? Or is that hypocritical? What about Natural History Museums that are full of examples of taxidermy — if you have strong feelings against taxidermy, do you feel that even in museums, taxidermy should be removed? And related, we posted about conflicted feelings overs fake fur last winter, and the comments were pretty mild. Does seeing fur trim on a sweater give you the same reaction as seeing a mounted set of antlers?

What’s your take? Do you have strong reactions to taxidermy when you encounter it in photos or in real life? Would you ever use taxidermy in your own decorating? Would you boycott a store that uses taxidermy in its displays? Do you feel fake (think cardboard or plastic) taxidermy is a fun alternative to the real thing? Or is it still a reference of cruelty for you? Any other thoughts on the subject? I’m so curious. Let’s discuss!

P.S. — For the Clue Party at January’s Alt Summit, the parlor was filled with taxidermy. I thought it was a bold entrance!