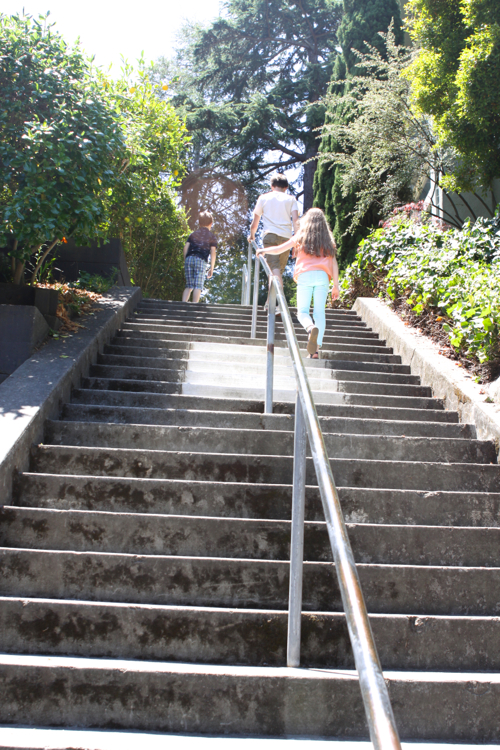 The other day I was chatting with a friend about step-parents, and step-siblings, and step-grandparents. I noticed my brain does such an odd thing when the topic of step-pareting comes up. I immediately think: I don’t know anything about step-relationships; they’re unfamiliar to me, not really part of my life. And then there’s a follow-up thought: What are you even talking about? You grew up with step-grandparents, you have a step-dad right this minute, and you have TEN step-siblings.

So weird, right? Not sure where it comes from, but clearly there’s a part of my brain that really wants nothing to do with step-parenting. And it’s extra weird, because the step-relationships in my life have only been positive.

My dad’s parents were divorced, and both remarried. So I grew up with three sets of grandparents. I never thought of Grandma Daisy or Grandpa Charlie as step-grandparents, they were just grandparents.

After my own father passed away (21 years ago), my mother remarried. Her husband’s name is Roger and he’s terrific. They have a sweet story. Mom and Rog knew each other in high school — they even have prom pictures. Both went off to college and married other people. Then, twenty-five years later, both of them suffered a huge loss when their spouses died — diabetes and cancer. They reconnected as singles and have now been married almost 20 years.

I love Roger and am so glad he’s in our family — he’s kind and helpful and calm and fun to talk to and a good sport and really dependable. Interestingly, I’ve never thought of him as my step-dad. I suppose because I was already grown and gone by the time he joined our crew. I think of him as my Mom’s husband, and my kids’ grandpa (he’s such a good grandpa!). He’s definitely a father-figure to me — someone I would go to for advice or assistance, but I don’t think of him as my dad.

Roger has 10 kids. My mom has 8 kids. So together they have a pretty epic crew. I think when they first married there was an idea that perhaps both families would get together as one big group from time to time, but that hasn’t happened. Since everyone in both families was mostly grown when Mom and Rog married, both families have pretty much kept their own family cultures. Which means I have 10 step-siblings (plus their spouses and kids), but I don’t know them very well.

My personal observations on step-parenting:

– It seems like step-dads are more accepted than step-moms. I think we have a strong anti-step-mom streak in our culture, going back to fairy tales like Cinderella. At the same time, I think that in my lifetime, the idea of step-moms has become more comfortable for people. So that seems like good news — maybe we’re overcoming our step-mom prejudice.

– It seems like step-relationships look very different if you’ve lived with each other in the same house for many years. Which makes sense. If a step-sibling or step-parent comes into your life when you’re already an adult who has moved out of your childhood home, the relationship might not play an impactful role in your life.

How about you? Do you have step-relationships in your life? What is step-parenting like in your home? Do any of my observations ring true for you? Or have your experiences been totally different? I’m especially curious about the step-grandparent observation — do you drop the ‘step’ for your grandparents too?

P.S. — Still processing thoughts about election results — and then saw that Sessions was fired! What a week.