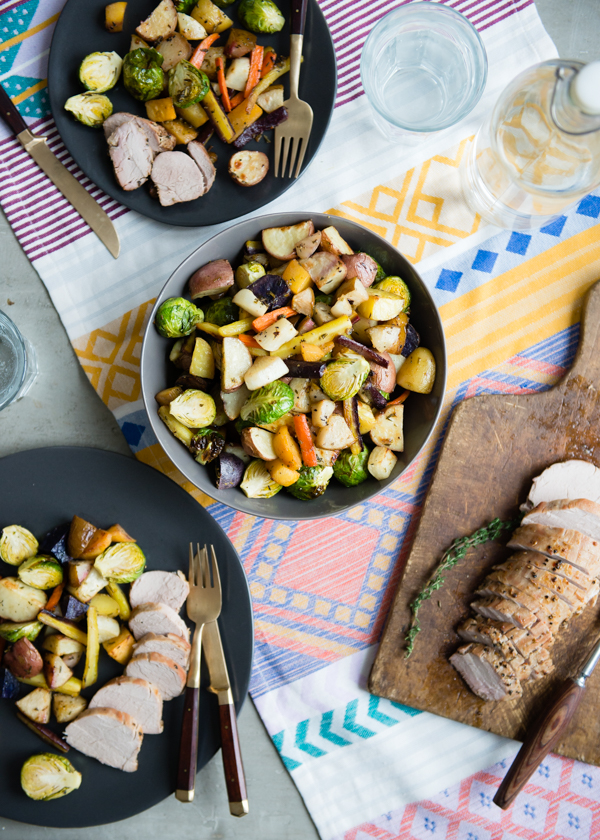 Yes! Here’s another super easy dinner option. Roasted Pork Tenderloin with Veggies. I know it sounds fancy, but don’t be fooled. This is simple as can be. It’s a one-sheet-pan recipe — so very little cleanup — and the pork loin comes pre-seasoned and ready to cook, which is a major short cut. You’ll basically chop some veggies put it all on a cookie sheet, and half an hour later you have a meal that looks and tastes like it took a ton of prep.

And I’m sharing this recipe this week, because the root vegetables make it hearty and perfect for winter weather, plus the simplicity makes it ideal for one of the busiest weeks of the year. I hope you try this! I’m confident it will become a family favorite. 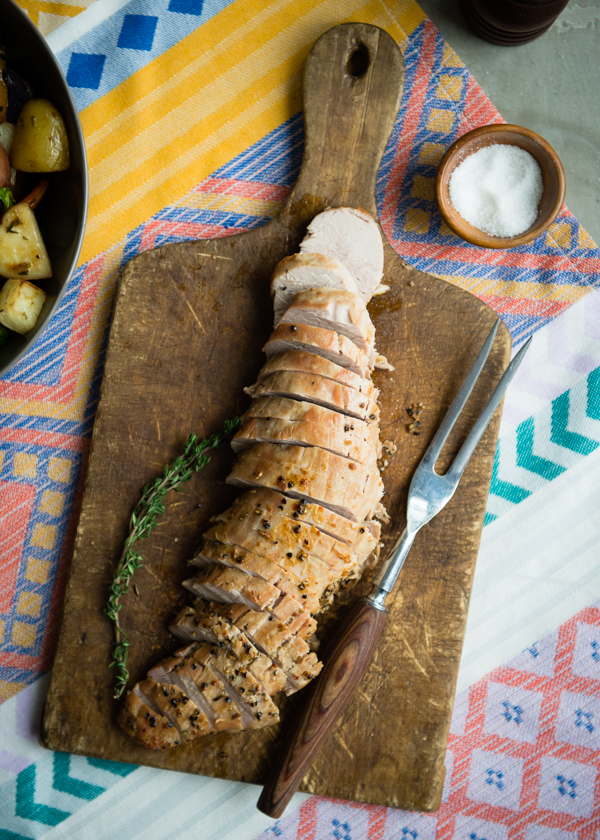 Lindsey has instructions and tips for us. Here’s what she says:

I am in love with one pan dinners — and that includes sheet pan dinners too. Place everything on a baking sheet, place it in the oven, bake/roast/broil, and dinner is done. What’s not to love? So today I’m sharing one of my family’s favorite sheet pan dinners: Roasted Pork Tenderloin with Veggies. My husband calls this his Dream Dinner. Tender juicy pork with loads and loads of veggies. This recipe is perfect for busy nights when you’re rushing around to various activities or attending events. While it’s a great recipe for anytime of year, we rely on this particularly during winter, and particularly during the holiday season. 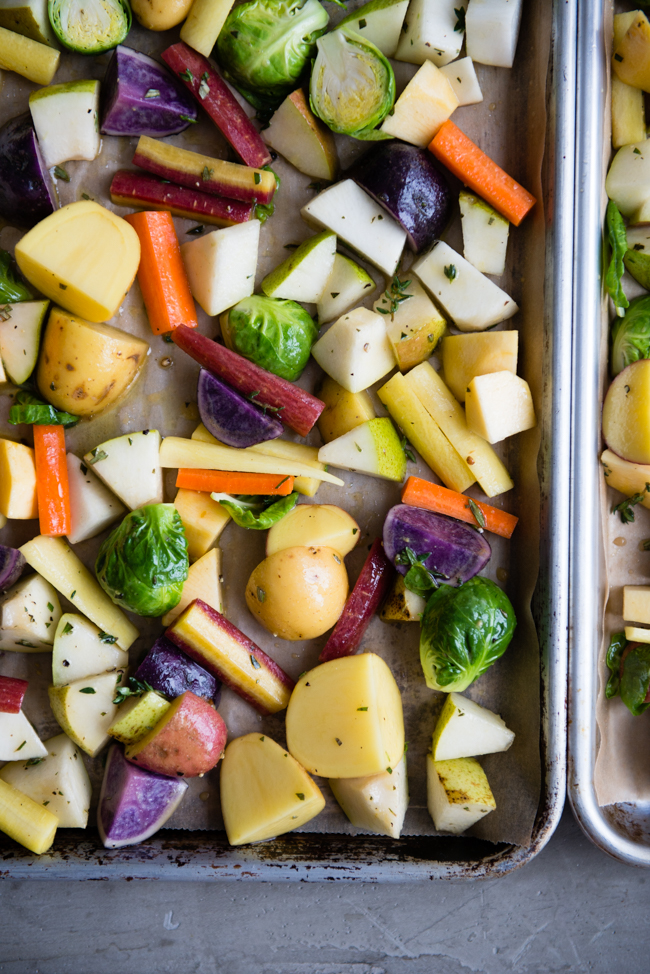 If it hasn’t been already, pork tenderloin is something that needs to be on your radar. It’s leaner than other cuts of pork, less expensive, and is unbelievably tender and delicious when cooked properly (hence its name). Pork tenderloin honestly doesn’t need much dressing up. Use it the way you would a simple steak or beef tenderloin. The key here is to make sure it’s cooked evenly. It’s one cut of pork that is okay to leave a little pink in the center. If you overcook it, it will still probably taste okay, but you’ll lose the juiciness and tenderness. (So don’t overcook it!) 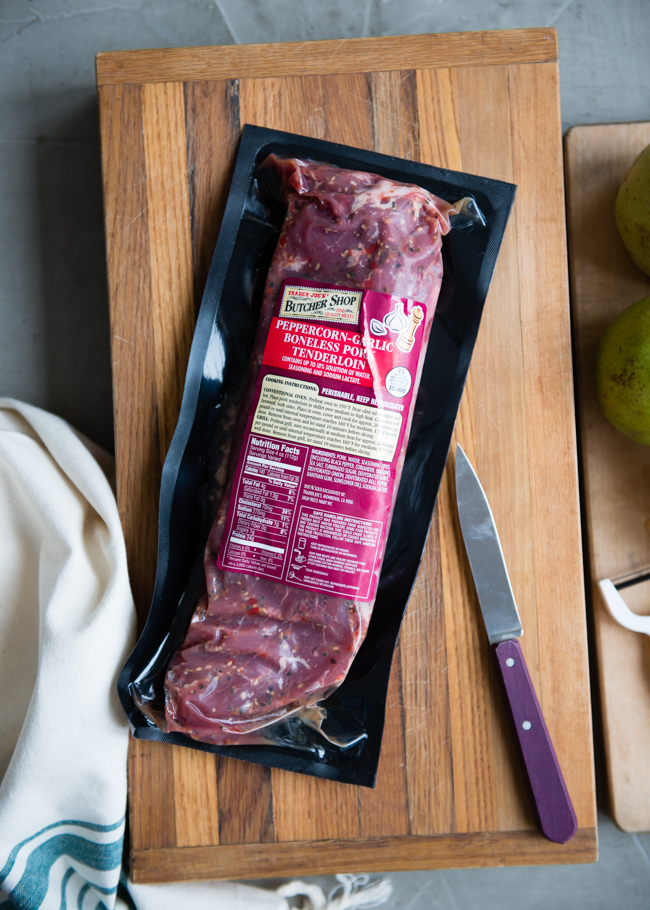 Another tip for busy nights, use a pre-seasoned or marinated pork tenderloin. It eliminates a step and they tend to be even more fool-proof. Typically you’ll see garlic and peppercorn. I feel like that’s a good one to get because you can take it in different directions depending on how you’ll be serving it. For example here I’m tossing the veggies with an herb maple-mustard glaze. All of those flavors go great together.

By the way, if you can’t find a pre-seasoned tenderloin, it’s easy enough to season it yourself. See the notes section below the recipe for my favorite seasoning blend. 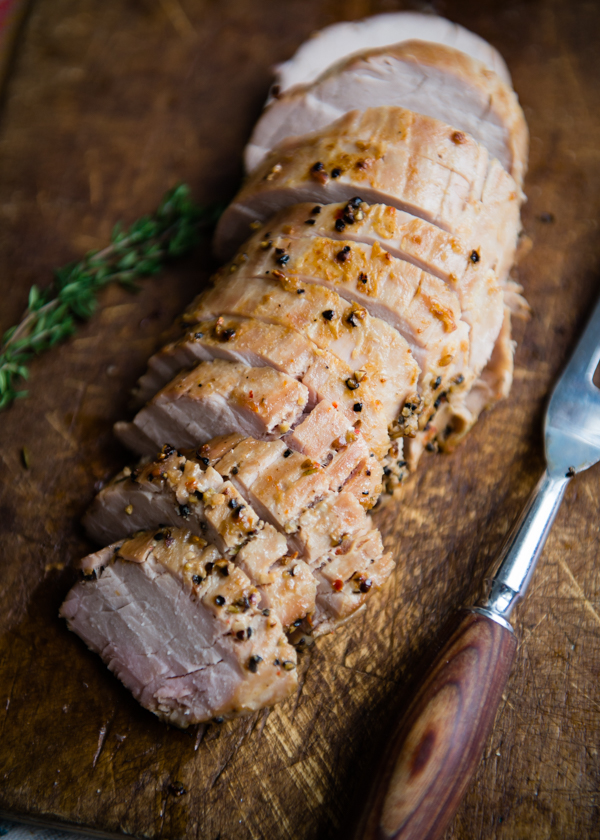 Roasting it is the absolute easiest, fool-proof way to cook a pork tenderloin. I used to follow the package directions and sear the pork on all sides and roast if for a short time in the oven. No more! The best way is to just pop it into the oven. It definitely cooks more evenly that way. (At least in my opinion.)

One tenderloin will feed 4-6 people. This is a great meal if you need to feed a crowd because you just buy an extra tenderloin and add more veggies. Super easy prep, even easier clean-up and totally delicious. 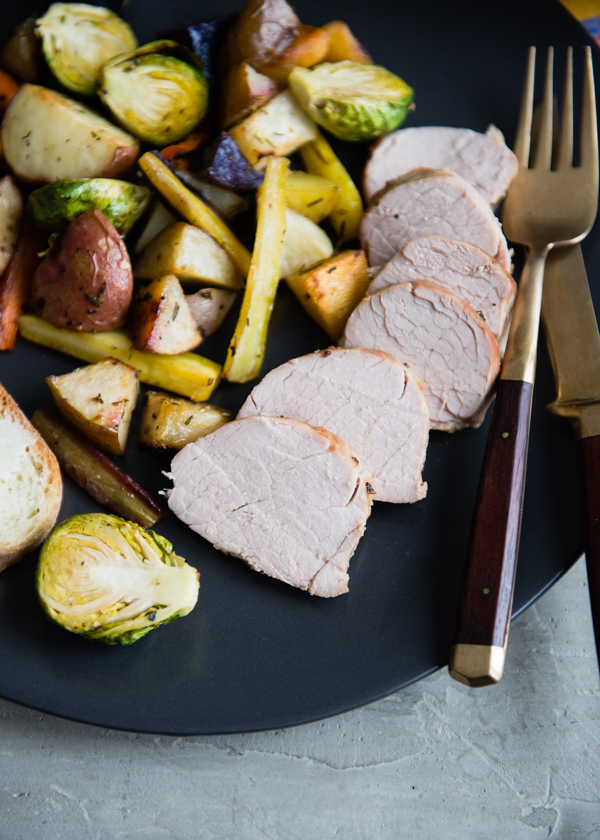 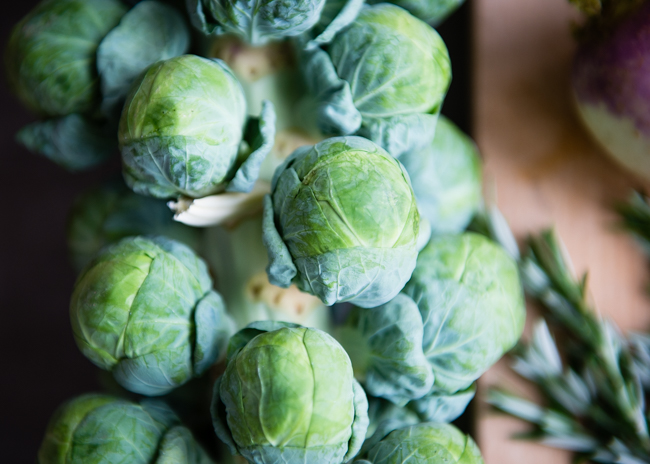 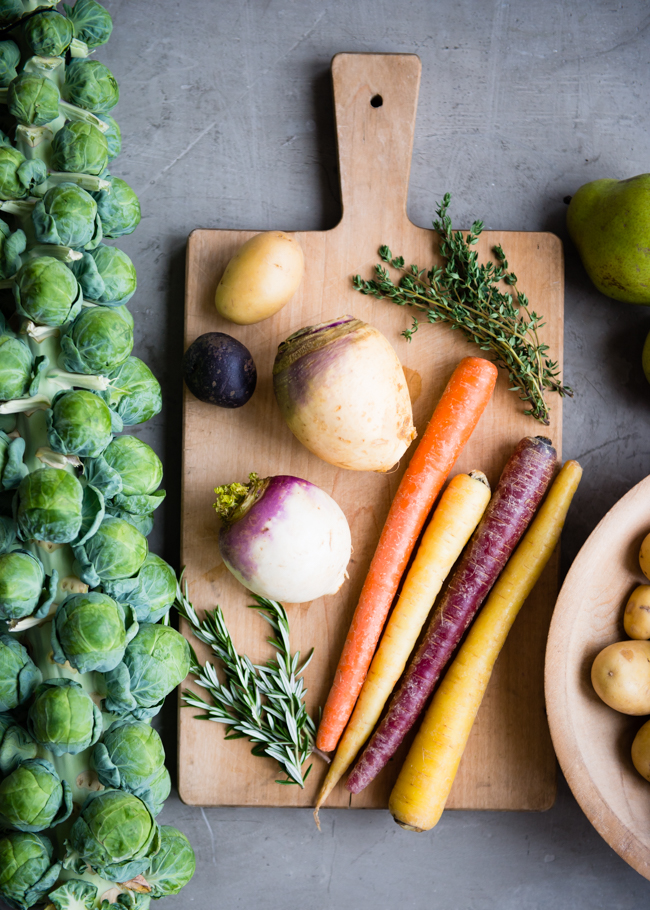 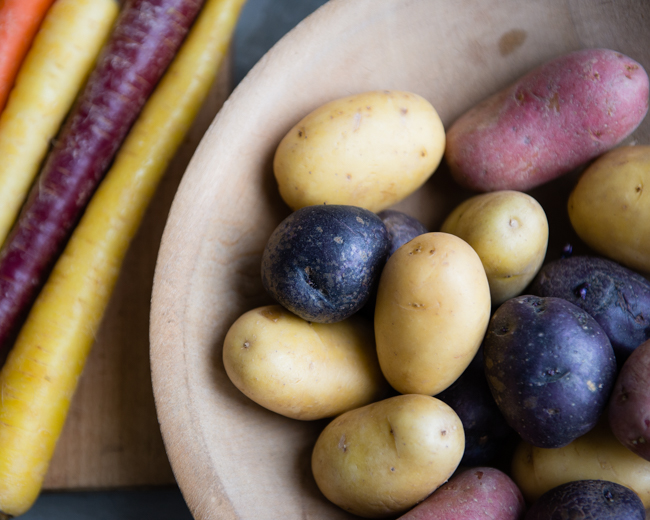 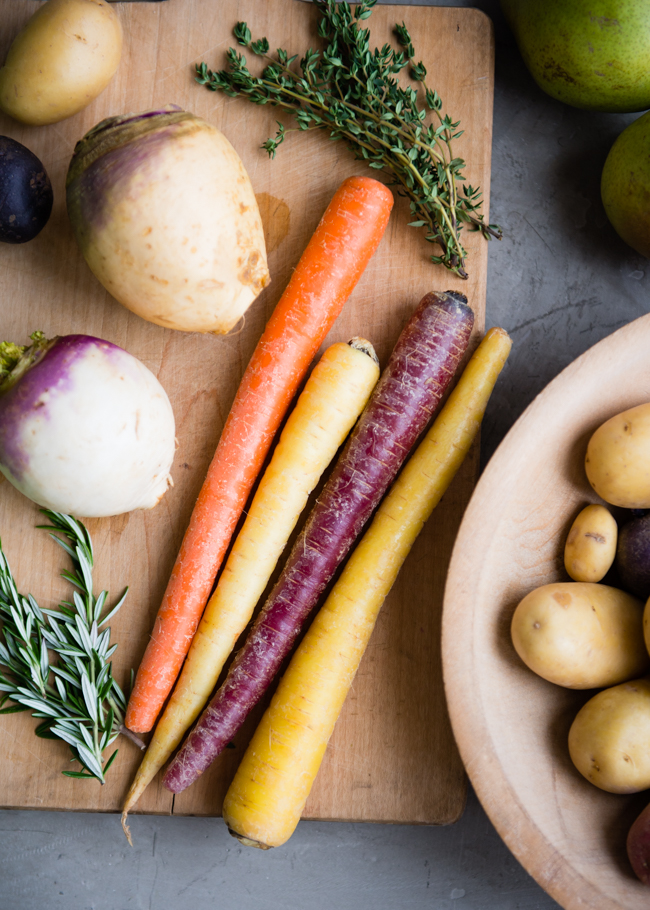 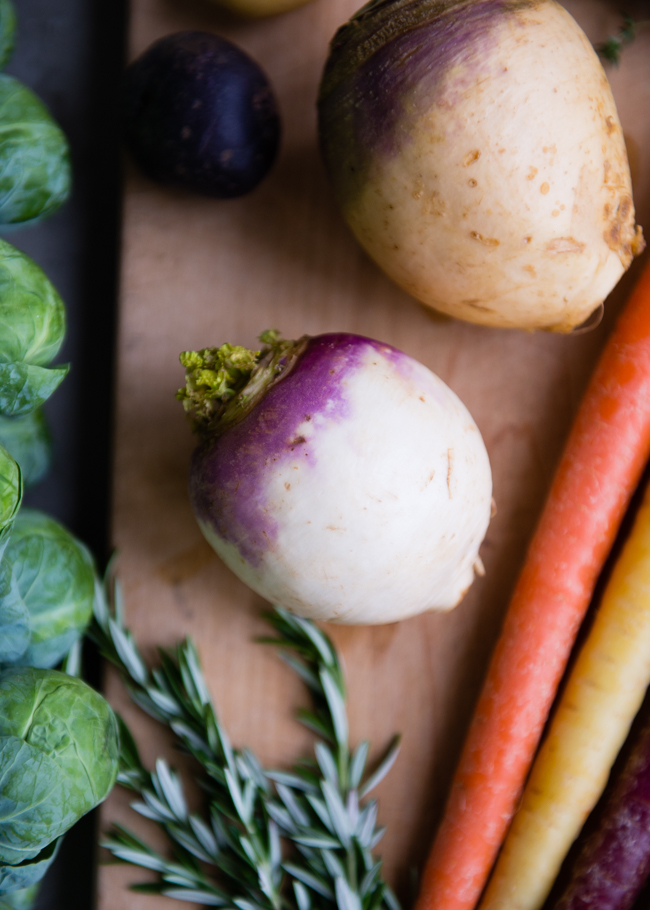 Choose a mix of veggies your family likes best. We tend to go for the root veggies and other winter produce during the cold weather. In the spring I’ll add asparagus. Broccoli and cauliflower are fantastic. Seriously, use whatever you like best and it will be delicious. 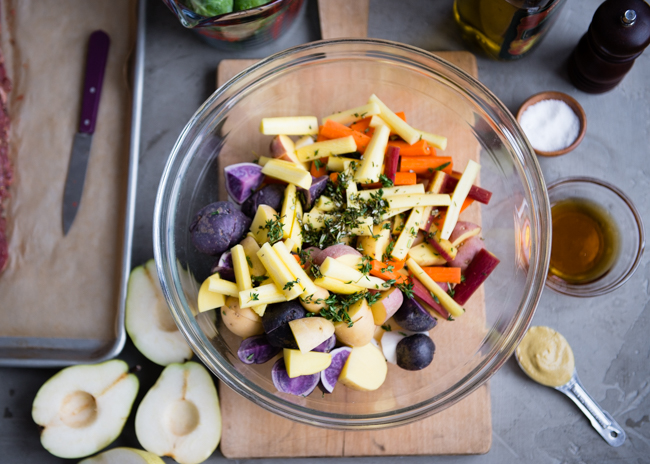 An optional ingredient that I encourage you to try is pears (or apples). They add a nice, sweet component to the roasted veggies and also go well with the herbs. I was first introduced to this combo by my friend Jenni and have never looked back. 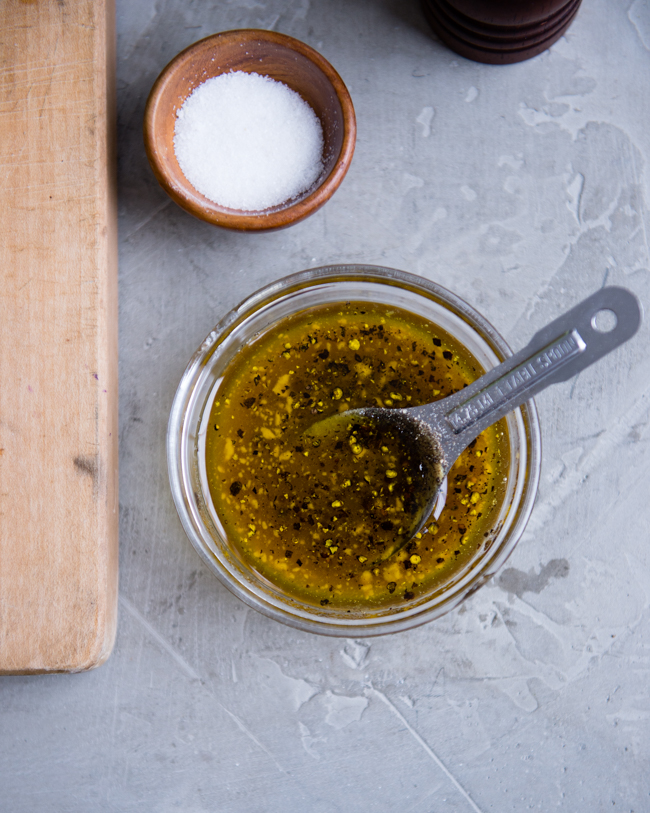 You don’t need to do the glaze, but it just sort of makes this feel extra special. The maple in the glaze helps the veggies caramelize even more in the high heat. And I am a mustard lover, so I get it in where I can. ;) Whatever you do, make sure you use enough salt so the veggies are seasoned as they cook. Add a pinch of salt and pepper before serving, too, but make sure they are well-seasoned before roasting. 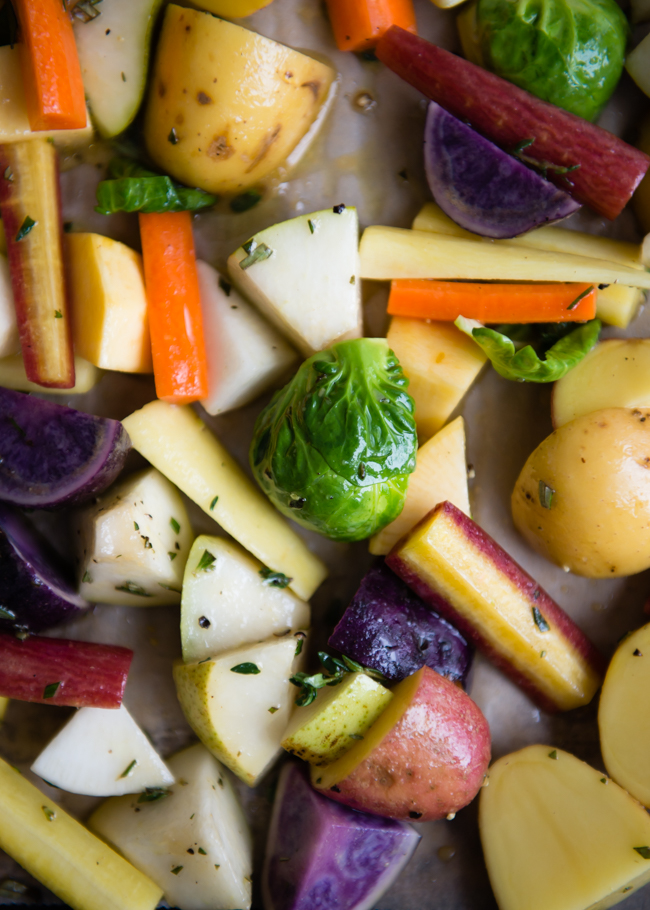 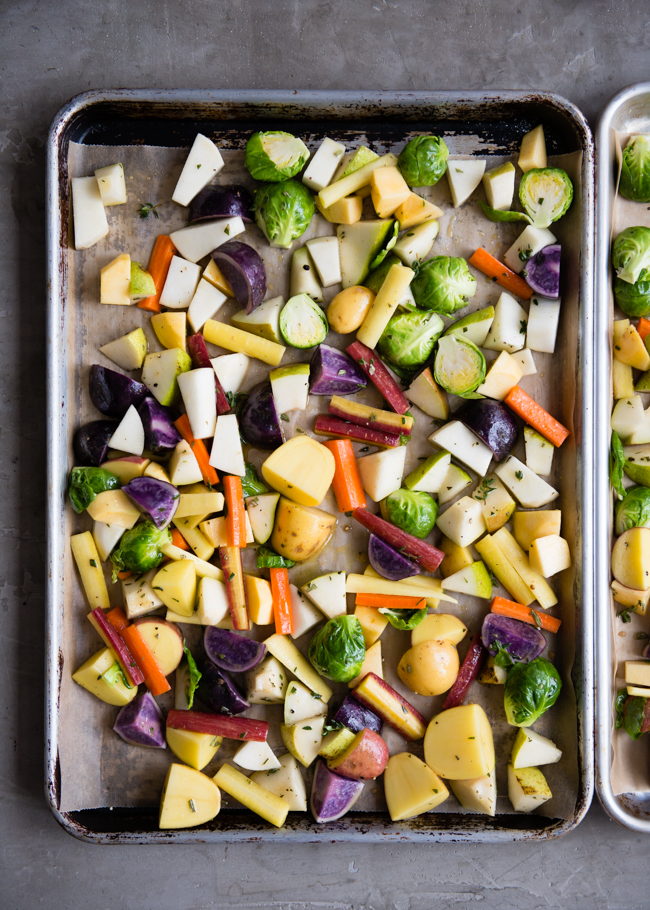 Some veggies will take a little bit longer to cook through unless they are cut into smaller pieces. For those veggies that take a bit longer, you can even put them into the oven first for about 15-20 minutes, then add the pork tenderloin and other veggies. No overcooked or undercooked veggies that way. This mix of veggies (and pear) that I used takes roughly the same amount of time to cook. Though if you prefer more tender-crisp Brussels sprouts, you may want to add them during the last 15 minutes of roasting time. 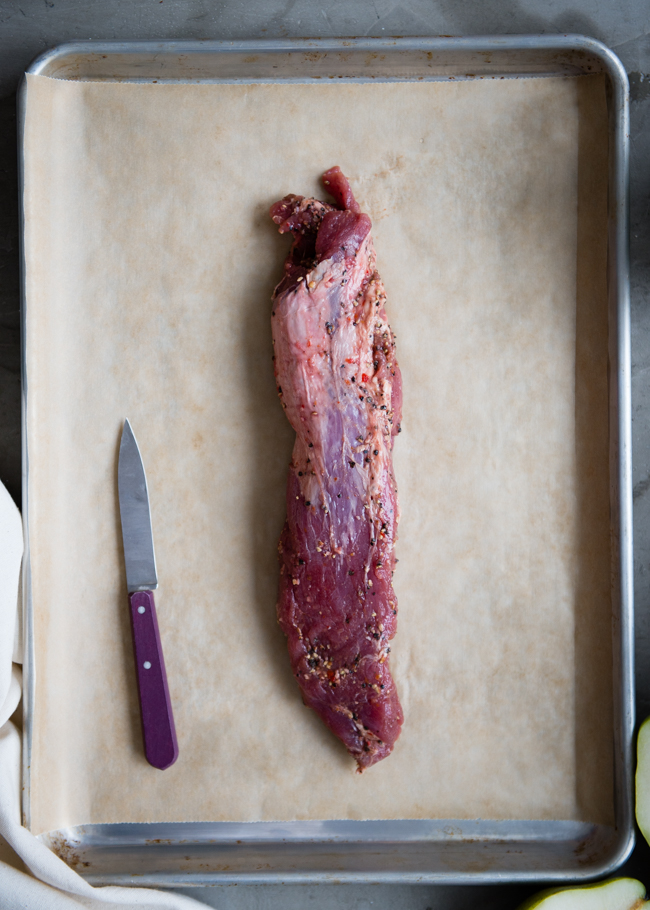 Back to the pork now. (And If you’re using a pre-seasoned pork loin, you can ignore this section.)

If the pork tenderloin isn’t pre-trimmed you’ll need to do it yourself. This isn’t difficult at all, especially if you’ve got a nice, sharp paring knife. There is a tough membrane called the silver skin that may run down one or both sides of the tenderloin. Just insert the tip of the paring knife between the meat and the membrane and gently slide the knife under with one hand while gently tugging on the membrane with the other. Try not to remove too much meat – just the silver skin. Removing that membrane will also help keep the tenderloin from curling up as it cooks. Also, if the tenderloin isn’t uniform in thickness, it may be necessary to tuck that little end underneath. It can be tied with twine or just left tucked under. Either way works fine. 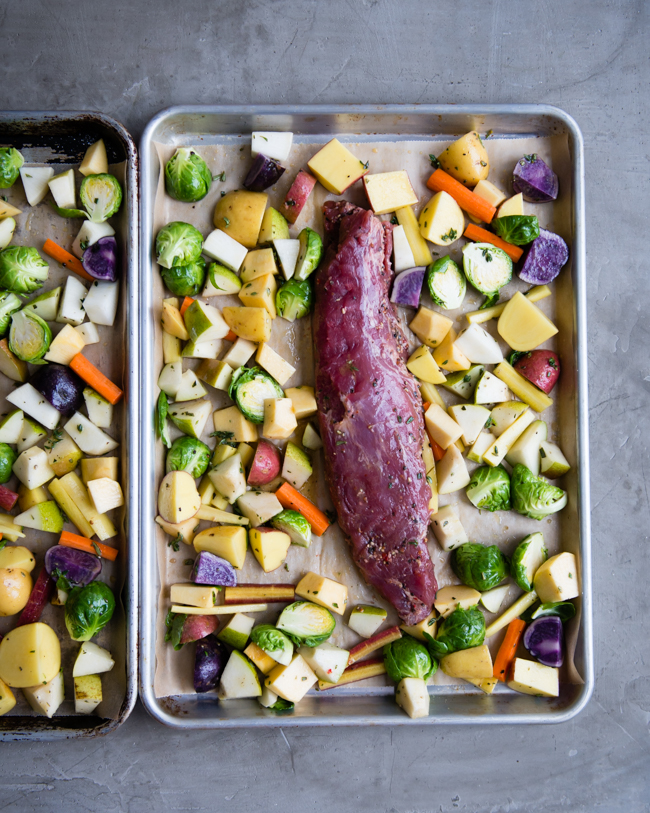 And that’s it! Super easy and quick. I know chopping veggies can feel a little more time consuming, but after that it doesn’t require any babysitting in the oven. You can put your feet up (ha!) and take a break before dinner. 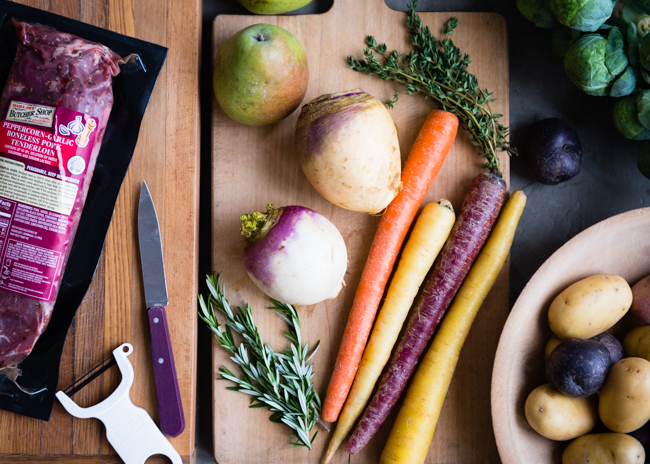 Instructions:
1. Preheat oven to 425°F. Line two baking sheets with parchment paper or foil. Brush lightly with oil or spray with non-stick cooking spray if using foil.
2. Place tenderloin on one of the baking sheets and let come to room temperature while preparing the vegetables.
3. In a small bowl, combine the olive oil, maple syrup or honey, Dijon mustard, sea salt, and black pepper. Set aside.
4. Place all of the cubed veggies and pears, if using, in a large bowl. Drizzle the maple-mustard glaze over the top. Add the herbs. Gently toss to coat all of the veggies.
5. Divide the veggies between the two baking sheets, placing about 1/3 on the same sheet as the pork and 2/3 on the other sheet. Arrange in an even, single layer so the veggies roast rather than steam. Place in the oven.
6. Roast for 20-35 minutes. At the 20 minute mark, start checking the temperature of the pork tenderloin with an instant-read thermometer inserted into the thickest part. It should read 145° to 160°F when the pork is properly cooked. If it hasn’t reached the temperature yet, keep roasting and check every 5 minutes or so to prevent the tenderloin from being too well cone.
7.Remove the pork from the baking sheet and place on a cutting board or plate. Cover with foil and allow to rest for 5-10 minutes. Leave the veggies in the oven to finish cooking.
8. To serve, sliced the pork into thin rounds after it has rested. Serve with the roasted veggies. 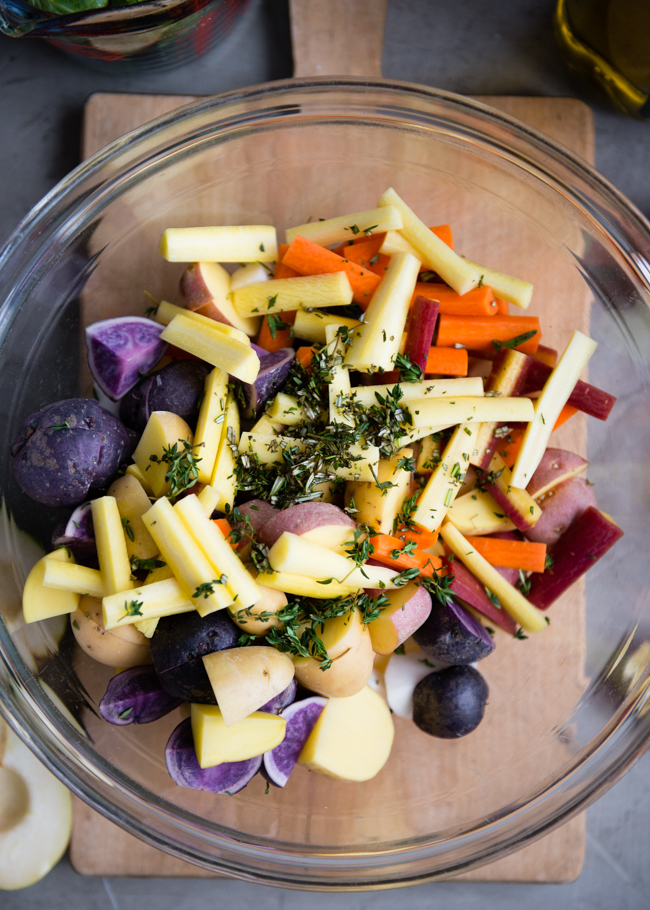 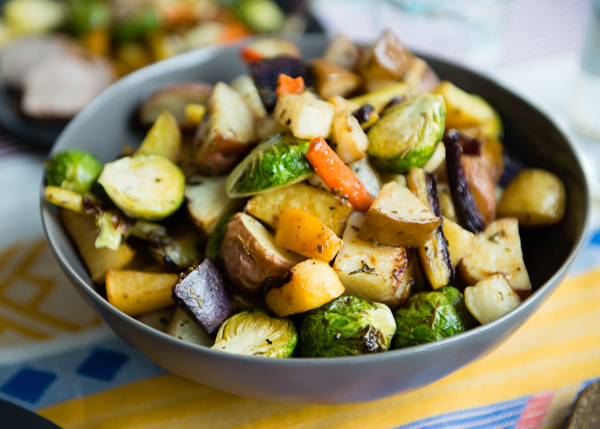 Notes and tips:
-If you aren’t able or don’t want to purchase a pre-marinated or seasoned pork tenderloin, simply combine: 1 teaspoon sea salt and 1/4 teaspoon each: garlic and onion powder, black pepper and paprika with 1 tablespoon olive or another oil. Rub over the trimmed pork tenderloin and let stand for 10-15 minutes or refrigerate and allow to marinate several hours or overnight.
-You can halve the amount of veggies, if desired, but we like the leftovers the next morning for breakfast or lunch.
-Substitute any veggies you like. Asparagus will not take as long as root veggies, broccoli, or cauliflower.
-If you don’t want to use the maple-mustard glaze, just toss the veggies with 2 tablespoons olive oil and season very well with sea salt and black pepper. 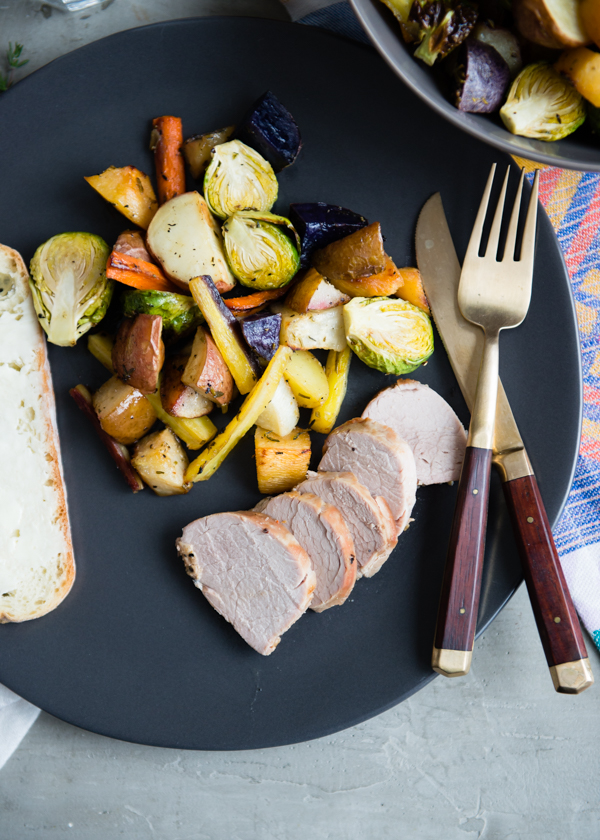 What do you think, Friends? Have you ever used a pre-seasoned pork loin? They are a staple at our house, but I’ve never roasted the veggies with them on the same sheet pan. So smart! And so much simpler. I’ll be trying this recipe tonight. If you make it, definitely let me know. I always love to hear if a recipe on Design Mom has been helpful for you.