Are you curious about how we’re handling school while we’re in France? Today, I thought I’d write up a little report for you all about it. But first, let’s admire these pretty French school notebooks from Laughing Elephant. Aren’t they handsome? I love school supplies at any time of year and from any country. They make me want to write a book report. : ) 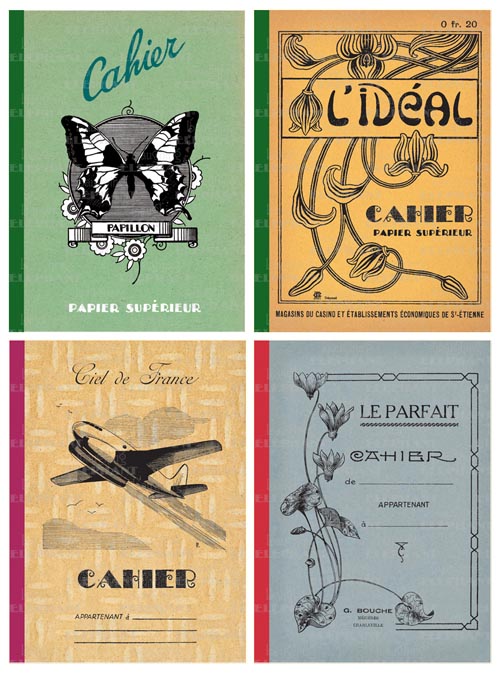 Now to business. We have gone back and forth, back and forth on how to handle school for the kids while we’re here. But in the end found it was something that needed to be decided once we were actually here and could check out the schools and see how our kids were adjusting to the move.

First, we gathered advice from everyone we could. Blog readers, family members that had lived abroad, friends with experience in French schools. And boy oh boy, did we get a mix of pointers and precautions. Everyone seemed to have a different experience. No surprise really, the same thing can be said for school discussions in America.

But based on the advice we received and research we did, we came up with several scenarios.

1) We could use K12.com (the company that employs Ben Blair). They offer online courses that would continue the curriculum our kids had been learning in Colorado and keep them up to speed with their American counterparts. Ben Blair and I would work together to help them through their coursework and we would supplement their learning with a French tutor who would come to the house and specifically work on French immersion.

3) Everyone could go right into the local schools. (FYI: we live in a rural area and the nearest International School is about an hour and a half away — too far for us.)

France doesn’t do much in the way of FSL (French as a second language), but our landlords had recommended the local school that could best accommodate foreigners. They had contacted the school on our behalf and made email introductions. So when we arrived we immediately set up appointments to visit the school and learn more about it. The recommended school is a private Catholic school, but is very different from the typical Catholic schools in the States. There are no uniforms, no nuns, and it’s heavily subsidized by the government, so it’s not expensive. They do offer religious education for about an hour per week. Other than that, it functions very much like a public school. The campus has a building for each age group. Preschool is called Maternelle. Grade school is called Primaire. Middle school is called College. And high school is called Lycée.

Our kids have been gung ho to meet friends and learn French since we arrived, so they were very excited to check out the school and immediately wanted to enroll. We had a long, frank discussion with them about it. Our kids are excellent students and have always done very well in their American schools, but here, they weren’t going to know what hit them. The school days are longer. From what we hear, the curriculum is more intense. And most of all, they don’t speak French (yikes!).

We told them our priorities for schooling are different this year than they were in Denver or New York. When we consider what we hope the kids will get out of our time in France, the goals are: make friends and learn French. Beyond that, we told them we really don’t care how much they’re learning the rest of the curriculum — at least until their French is in order, which will be months and months. Homework won’t be a priority. Getting good grades won’t matter. If they’re making friends and learning French, that’s plenty for this year.

Yesterday, Ralph and Maude had their first day of College. They loved it! They came home beaming. They went on and on about the food (a great topic for another post) and how friendly the students were. Tomorrow, Betty, Oscar and Olive have their first day. I’m very nervous for them, but excited too. Each of their teachers speaks a little bit of English and in Olive’s class, we know one classmate is from Ireland so they’ll have English in common as well.

Today, we’re feeling great about our schooling decision. We know we may feel differently as the year progresses, but I like the comfort of having K12.com as an option if this doesn’t work out.

I’ll follow up with another schooling post next week to share some of the details and stories the kids bring home. Things that are the same and things that are different than American schools — for example, they don’t have school on Wednesdays. Yay!

Thanks for following along.