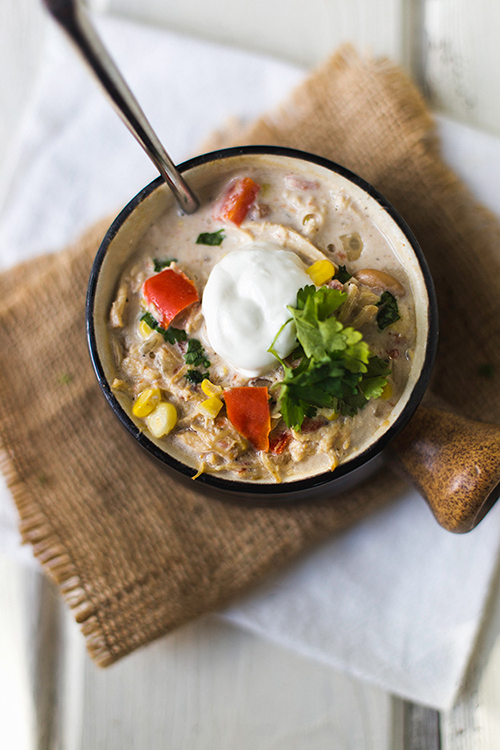 The temperature dropped a bit today. And we even had a little rain! And I saw a few red leaves!! That’s pretty much as “fall” as it gets in Oakland, but I’ll take it! In fact, I felt so autumnal today, that I started going through my slow-cooker recipes and thinking about making something cozy for dinner. I was thinking chili.

We happen to have a really good (award-winning!) chili recipe, but I’ve been craving something new, so I asked Liz B to share the details of her white chicken chili. It looks so good!

Also, I’m curious: Do you have a strong opinion on chili? Do you prefer red or white? Beanless? Meatless? I’d love to hear! 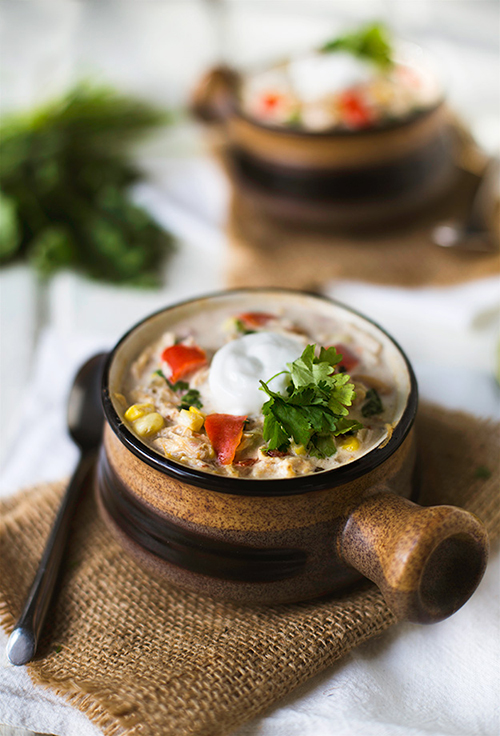 It seems as though fall is upon us, and while I love a good scarf or pumpkin-spiced anything, I’m generally pretty resistant to the end of summer. In my twenties, I would wear my favorite sandals well into early December (yes, I was that college student), and now, as a mama of two littles, I look at fall as the beginning of that nine-month stretch in which I have to bundle my kids up for eighty-five minutes before we leave the house.

And this year should be no different. I’m from Minnesota, and recently, several local news agencies reported that this summer was one of the best summers ever when they looked at temperature and humidity records. Apparently there is something called the “glory index”- a companion to winter’s “misery index” – which ranks summers, and this summer was top notch.

So with such a beautiful summer, one would think I’d be in denial about the maple tree already turning orange in my front yard, but actually? I’m ready for fall this year. The first week of September around here was hellishly hot and humid, and I think it was the weather’s kind way of breaking our summer spirits, readying us for fall, with its rhythmic pace and cozier times spent indoors.

I’m looking forward to the casseroles and stews and roasts of colder weather, but first, this chili. It’s the perfect dish to bridge the gap between summer and fall because while it’s warm and thick and comforting, it also highlights the best of late summer’s corn and bell peppers. This white chicken chili is a staple in our family, and it couldn’t be easier to make. Most of the ingredients are thrown in the crockpot in the morning — including the uncooked chicken — to simmer away all day. But what we love most is the creamy indulgence of this chili; a bit before serving, you stir in heavy whipping cream and sour cream, placing this chili somewhere in the 95th percentile on my belly’s glory index.

We like to give this chili a southwestern flair with limes and cilantro and tortilla chips, but it’s just as good with some fresh parsley and crispy garlic bread for dipping.

Autumn, we’re ready for you this year. 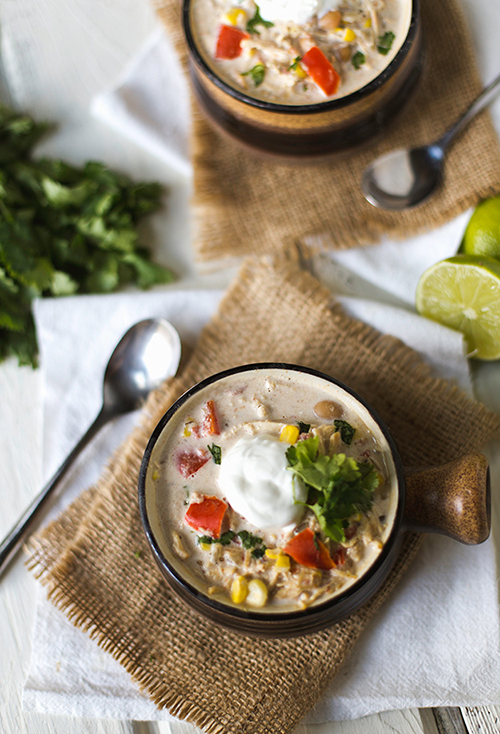 Add the onion, garlic powder, beans, broth, Rotel, salt, oregano, black pepper, and cumin to the crockpot. Stir to combine. Place chicken breasts in the mixture, tucking them underneath and spooning some of the mixture on top of each breast.

Cook on low for 8 hours (see below for shorter cooking time option). After the cooking time, use a spoon to break the chicken breasts into small pieces.

Stir in the sour cream, heavy whipping cream, bell peppers, and corn. Cook on low for an additional hour until heated through or on high for 20 minutes if in a rush. (The bell peppers will be slightly less tender with the shorter option).

Enjoy with serving options above as desired.

Tips:
This dish can also be cooked in your crockpot for 4 hours on high. You will get a slightly less thick chili this way, and the chicken will not be quite as tender, though definitely still fine. With a longer and slower cooking time, the chicken fell apart at the mere sight of my wooden spoon; whereas, I had to shred the chicken with a fork after 4 hours.

Thank you so much for this recipe, Liz! I can’t wait to make it. And it’s a terrific addition to our Slow Cooker Recipe Series! I also loved hearing about your glorious summer. I hope fall and winter are equally fabulous.