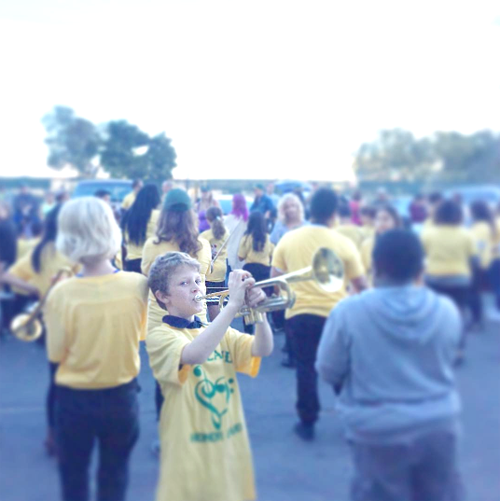 Welcome to September’s installment of my random thoughts. I can’t believe we’re in the last week of September already! This month has been a life changer for sure. Feel free to share your own random thoughts in the comments.

– So we only have four kids at home now. But you may remember, we’ve actually had a four-kids experience during the fall of 2014, when Ralph and Olive went to France for a semester. But this definitely feels different. Because of the ages and stages of our two oldest, this feels so much more permanent. Like Ralph and Maude may not ever really move back. Just a summer break here or there. Or coming home between projects. Still hard for me to wrap my head around.

– Now that Olive is the oldest one at home, one of the first changes I noticed is that the music has changed. With Ralph and Maude no longer adding their playlists to the mix, pretty much all we hear lately is Hamilton. Hah! Olive happens to be obsessed with Hamilton at the moment. Are you familiar with it? It’s the latest, greatest, impossible-to-get-tickets-to Broadway show.

This has been a reminder of how much my kids influence what I listen to. Is that true at your house? Do you like the music your kids like?

– Another change: the kids are already talking about switching up rooms. Oscar Betty & June are thinking about rooming together, which means Olive would have a chance to have her own room. It’s fun to think about how we can revamp the bedrooms — especially because we wouldn’t need to move walls or update electricity this time around — it would just be decor, which is much more enjoyable for me. But I told them we need to wait until we know for sure if Maude is heading back in January.

– This weekend, I took advantage of the Elfa sale going on at the Container Store and ordered shelves and drawers and hanging rods for the new Master Bedroom closet. I did a bunch of research on closet organizers and the consensus was that Elfa was the way to go. Have you ever used it or tried it? This is my first time. Our supplies get delivered this week and I’m crossing my fingers that the install will happen this weekend. So excited to have a closet again! (Which reminds me, I need to give more updates on the construction! We’re nearing the end.)

– Related to my current lack of closet, I’ve ended up accidentally having a capsule wardrobe for the last 3 months. When I packed up for our summer in France, I stored everything else because of the construction. But I’ve been home for a month and I’m still using only what I packed for the summer — because everything else is still inconveniently stored.

It’s been interesting to have limited choices and makes me curious about keeping a minimal wardrobe. But one thing I’ve noticed is that my clothes are experiencing much more wear and tear than they normally would. After 3 months, many pieces need to be replaced. Have any of you tried a capsule collection? Is it normal to have to replace items quarterly?

– I didn’t mention it at the time because I was totally pre-occupied with other things, but a few days before Ralph left on his mission, we took the family to Disneyland for a couple of days. Many years ago, when there were only 5 kids and we lived in New York, we took them to Disneyworld once. (The younger ones don’t remember that trip at all, and the older ones only have a few memories.) And once, a couple of years ago, Maude and Olive got to go to Disneyland for their cousin’s birthday.

But we’ve never taken the whole family to Disneyland before. This is surprising to me because a) we live in California, and b) Disneyland played an influential role in my childhood. I love it there and went many, many times as a kid. And I assumed I would take my family many times as well. But somehow we haven’t.

It was a short trip during a busy time, but I really wanted to fit it in. I think I was trying to give my older kids one last “childhood experience”. And I also wanted to make sure the younger kids had Disneyland memories that included the older kids.

I’m so glad we went! It was as wonderful as I remembered. Actually better even, because I had never been to the California Adventure park. As a bonus, we were there on a really good week. We went the Tuesday and Wednesday after after Labor Day and the park was (relatively) empty.

– A little hair update: I’ve decided to try going gray. I’ve had 2 haircuts since we arrived home and didn’t color my hair at either one. My stylist think the gray will be completely trimmed off in maybe 2 more haircuts (that’s about 2 months). I’m curious to see how it will look. I know I might hate it, and bring back the dye. But who knows?

I’m also very curious to try a high-quality wig. I think I would like the option of switching my hairstyle in an instant. I’ve been doing some research and it turns out wigs are a whole world I know nothing about. Have you ever worn one? Not as a costume, but as everyday hair?

– Last Tuesday, Oscar played the trumpet with this school band at the Oakland A’s game. They played the National Anthem to open the game. Many of the kids have been following the NFL protests and felt conflicted about this performance, so during the last line of the song about 75 or 80% of the band members — including Oscar — took a knee in protest while they continued to play. The crowd gave a big cheer and it was covered in our local news. (I saw on Facebook today that it’s now going viral.)

– In other Oscar news, he was just cast as Tiny Tim in the musical Scrooge! He’s very excited. It’s happening on a big stage in a huge auditorium and he has a solo song. He is so into it! He’s had a realization that his small size is an advantage in this instance. He has the confidence and experience of an older kid, but looks like a younger kid. (As we get closer, I’ll announce dates of the play for any locals you might want to attend. Tickets are free!)