What Does Protecting Your Family Look Like to You? 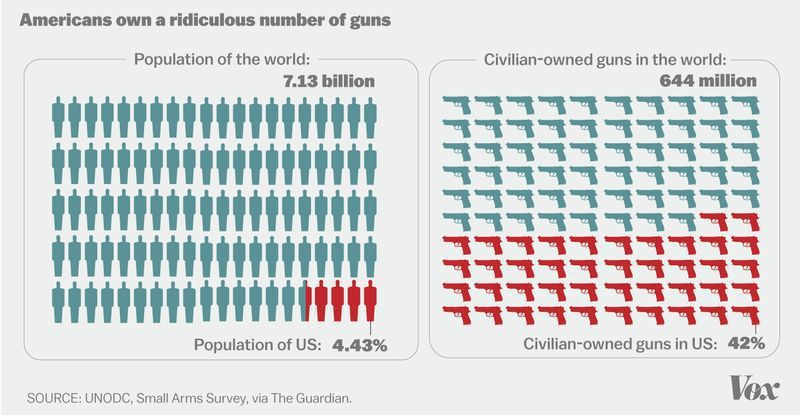 [ Note: Today, I spent much of my time discussing gun safety on Facebook. I attempted to write a post here, but couldn’t think of anything to add to this post, except another dose of heartbreak. This was originally published on October 3rd, 2017 — after the Las Vegas concert massacre. Sending love to you and yours. ]

I know I’m not the only one, but I find it very difficult to concentrate immediately following a national tragedy (whether it’s natural or man made). Obviously, I have strong feelings about this topic and come to this with my own biases, but here are some of the things I heard and learned yesterday as I argued with friends and strangers about guns:

1) When I mentioned something like stricter gun laws, or gun law reform, or improving gun laws, most of the gun owners responding seemed to hear my words as: I want to take your guns away. Even though I never suggested or hinted at such a thing. So that makes it hard to start a fruitful conversation. I’m still trying to figure out how to solve that glitch. Maybe if I start comments with “I definitely want you to be able to keep your guns, but….”

2) Based on wide polling, most Americans, whether they own guns or not, are totally in favor of things like universal background checks, and eliminating gun purchase loopholes at gun shows, and not allowing people on the no-fly list to buy guns. These things just make common sense. The vast majority of us are actually all on the same team as far as being on board with gun control. Which is great news.

So why can’t we make some progress in this area? Well, this isn’t something I learned yesterday, but a lot of it comes down to the NRA. Even though initiatives like I mentioned have wide bipartisan public support, the NRA is powerful enough and gives our representatives (both Democrat and Republican) so much money, that they can prevent legislation from passing. Which is what happened to the proposed legislation following Sandy Hook.

3) Though many countries (including ones with similar cultures to ours like Canada and Australia) have largely solved their gun problems, there are a whole lot of people who aren’t willing to look at what works elsewhere. There seems to be an idea that America is too different from every other country. I mean, I realize it truly is a unique situation, but I still think we can learn from other countries.

I think it would be helpful if the idea of responsible gun ownership was more defined and agreed upon, because from what I can tell, it seems like it would align with fairly strict gun regulation. Which (no surprise) I’m on board with.

5) Speaking of responsible gun owners, every single one I asked would be totally fine if semi-automatic assault rifles were severely limited in availability or not sold at all. That seems like a good unifying thing, a point we could all rally behind. Everyone seems to understand that these are not tools used to protect families, they are used attack and to kill a lot of people at once.

6) When the topic of gun law reform is brought up, there are a limited number of arguments that status quo gun advocates will present. And yesterday they were presented over and over again. Perhaps they will be presented in the comments below. They boil down to these:
– more laws won’t work
– guns don’t kill people, people kill people
– it’s not appropriate to discuss this right now
– you can’t talk about this unless you’ve already eliminated abortion and solved alcohol-related deaths
– the status quo is working fine for me and I don’t want things to change
– it’s a “heart” problem, not a gun problem
– it’s a mental health problem, not a gun problem
– any gun law changes will punish responsible gun-owners
– evil people will be evil even without guns
– we already have really strict gun laws
– there’s nothing that can be done

I understand these arguments were offered sincerely in some cases, but personally I find them to be pretty weak (or examples of straw men), and I spent a lot of time responding to them yesterday. Ultimately, they seem to be a distraction from what people are really feeling. Which is:

7) There are a whole lot of Americans that are 100% convinced they will need to defend their family at gun point. Today, tomorrow, or sometime in the future. And to this particular group (which is a LOT of people), owning a gun, and spending time training how to use it, is simply what is required to be a responsible adult or responsible parent. A worthy goal.

The problem I have with this goal, is that it doesn’t really seem to be justified from a non-emotional standpoint. If shown statistics that they are more likely to get hit by lightening than they are to have to defend their family at gun point, it doesn’t change their thinking even a little bit. If shown reports that it’s been proven that homes with guns are actually less safe than homes without, they think their home is the exception. If told that data shows their guns are more likely to cause harm to an innocent family member than a criminal, they block that fact out.

They sincerely believe their family is or will be under attack. And the only thing that calms their fear, or makes them feel prepared for the oncoming attack, is owning a gun.

I understand that their feelings on this are real and powerful. I get that. I really do. The thing I can’t figure out is: where does the idea that we will need to defend our families at gun point come from? Because I don’t have that idea in my head at all, and it’s hard for me to comprehend. I mean, I get wanting to protect my family, but I don’t associate that desire with guns.

8) In a discussion about the NRA, someone brought up the history of the tobacco lobby. Apparently, for many years they were hugely influential, and it was thought that nothing could overcome them. But here we are today, and smoking isn’t allowed in restaurants, in airports, on campuses or in most publics spaces. Things have changed drastically. The tipping point seemed to be putting into words that one citizen’s rights couldn’t infringe on the health and safety of another citizen.

If we allow members of our community to gather a personal collection of semi-automatic rifles over a few years or even decades, with no knowledge of how they are stored or maintained, are we putting their rights above the safety of the community?

What would it take to overcome the influence of the NRA?

9) The way gun owners spoke yesterday about mental health was troubling to me. Part of why they are confident in their gun ownership is because they see themselves as mentally healthy. But bodies are tricky. They change. And sometimes change very quickly. You’re healthy one month and the next month you have cancer. The brain is part of the body and it can change quickly too. Ben Blair’s great-grandfather was President of BYU. He also committed suicide because of depression. Bodies change. Often without warning or awareness that the change has happened.

Yes, you’re a healthy, responsible gun owner today, with a tidy personal collection of firearms. But when you hit a mid-life crisis will it be as safe for you to have easy access to guns? How about when you become older and senile or forgetful? How about when your teens go from happy-go-lucky to depressed and suicidal over night?

10) What I’d like to see? More sensible regulation and lots of it. We could start with what we require of drivers and car owners. Things like registration for all guns, required to be renewed yearly. Regular physical inspections of all guns to make sure they are working properly and have not been altered in a harmful way. Universal gun licensing with ongoing renewals and physical check ups to make sure gun owners are of sound mind and body. I would LOVE to see a nationwide gun buyback modeled after what was done in Australia. I know people have invested a lot of money in their guns and it would be great if they could get that investment back while doing something good for their community. I think semi-automatic firearms should be illegal and not sold period (and old models not grandfathered in either which is what has happened with automatic rifles). I think it should be very difficult to be able to get a permit to sell guns, and that guns should only be sold in a very small number of regulated shops. I think we should limit the amount of ammunition that can be purchased. I would like to see gun laws unified across the country, because we don’t have checkpoints at state lines, and it’s too easy to buy a firearm in one state and bring it to another. I could go on, but I’ll stop there.

What’s your take? Do you own guns? If yes, how do you define “responsible gun ownership?” Is your main reason for owning guns to protect your family? Or perhaps you’re a hunter? Are there any ideas I suggested that you feel are extreme? And as a gun owner, what changes would you suggest to reduce gun violence in our country?

For those of you who are not gun owners, what are your thoughts? Have you read anything lately that changed your thinking about guns in some way? And when you think about protecting your family, since you don’t own a gun, what comes to mind instead? For me, it’s stuff like a living will and life insurance.

How did you talk to your kids about Las Vegas? Would love to hear your thoughts.

P.S. — Want to put things in numbers perspective? This very short article stunned me. Also, this is helpful: Gun violence in America, explained in 17 maps and charts.

P.P.S — If you’re tempted to bring up Chicago or “black-on-black crime,” please don’t. I’m not okay with race-baiting while we discuss this topic (or any other time).