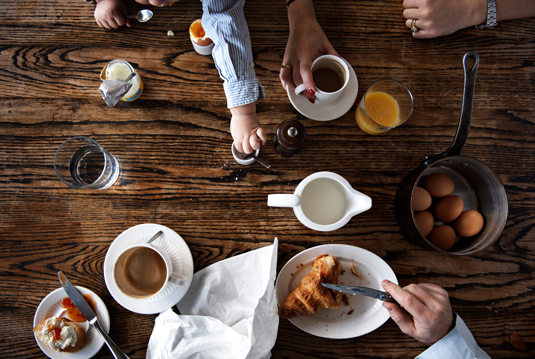 I’ve decided Thursdays will be my days to write about our France preparations and share anything practical we’ve learned. Updates this week: We bought our plane tickets — whoo hoo! And we’ve been piling up a stack of books about France and French culture.

One thing I’ve read is that snacking is not really done in France, and that meals are a bigger deal than they are here — at some fast-food restaurants there are even cloth napkins! Also, apparently it’s custom to eat with a knife in your right hand and a fork in your left. I tried it tonight and I need practice. : )

photo via The Nature of Order

We were terrified when we saw how much tickets were on the airline sites and even at places like Orbitz and Travelocity (remember, we have to multiply everything by 8 people). But then we tried Kayak.com. From what I can tell, they don’t actually sell tickets, but they showed us where to find the bargain prices. We ended up finding tickets for a flight on Air Canada and bought them through a site called Airfare.com. I feel great about the price we paid and I’m excited to fly Air Canada. I’ve never flown with them before, but they were voted Best Airline in North America, so I expect great things.

We will by flying from Denver to Montreal, then overnight from Montreal to Paris. We leave on February 1st.

Another note: we bought one-way tickets, but we noticed that for some flights/dates roundtrip tickets were cheaper than one way options. So in some cases, it might be wise to buy a roundtrip ticket and then just not use the return flight.

All I wanted for Christmas was books about France and Ben Blair happily obliged. He ordered a bunch of books to include in our France Kits and we have been devouring them. Much of what we found is focused on Paris — especially the kid options — which is fine with me. I adore Paris! I’ll list what we have so far, but I hope you’ll add any other titles you’d recommend in the comments.

Sixty Million Frenchmen Can’t Be Wrong
This is where I read about how eating is viewed in France. Also in this book: Did you know that stores in France can only hold sales/markdowns twice a year at designated times? It’s a 300 year old tradition that’s run by the police. So interesting!

The Discovery of France
Graham Robb biked around the entire country and researched as he went. I haven’t started this one yet, but I can’t wait.

Parisians
This is also by Graham Robb. What a great writer! This volume is full of historical short stories about Paris. I love it.

DK France – Eyewitness Travel Guides
This is a practical travel guide. It’s packed with so much information. Fun to browse.

Daytrips France
This is another practical one. It describes 48 things places you can visit within a day’s travel from Paris. Makes me want to start exploring asap.

A Year in Provence
My brother-in-law, Mark, gave us this as soon as he heard we were thinking about moving. It will make you want to buy a house in the South of France.

This is Paris
I’ve posted about these wonderful books by M. Lasek before and was glad to have an excuse to add the Paris one to our collection.

Adele & Simon
This was recommended by several readers and I can see why. It’s so charming! Adele and Simon spend the afternoon touring around Paris after school and silly Simon drops something everywhere they go.

Paris Hide-and-Seek
Ben Blair bought this one for the kids when he visited our home-to-be in France a few weeks ago. Adorable. It’s like a Where’s Waldo but the little characters are hiding all around the city. I could only find a link to this on the UK Amazon site.

What else would you recommend? I especially love books that talk about manners and culture.