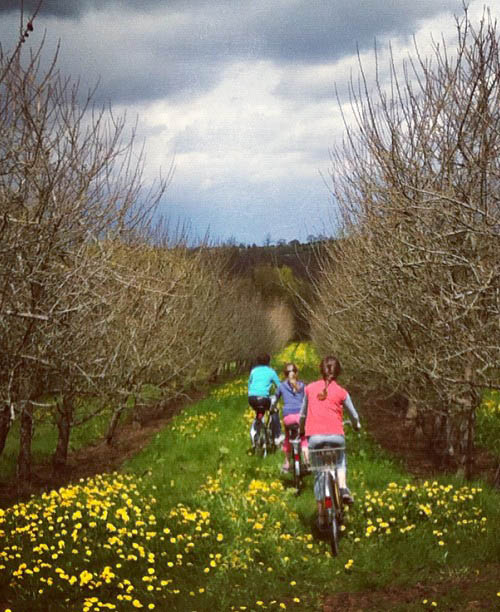 It’s been several weeks since we shared an Olive Us episode, and we’re so happy to have a new one today! In this episode, titled Spring Cleaning, Ralph, Maude and Olive work together to prep their bikes for a ride on a sunny day. Isn’t it lovely to work hard, then enjoy the benefits of your hard work? We love it!

Friends. They are not wearing helmets. Yikes! (If you saw the original trailer, you may remember this.) I wish I had a good excuse, but honestly, it didn’t even cross my mind. In the barn at La Cressonnière, where we filmed this, there are a dozen bikes and not a single helmet. Wearing helmets for casual bike riding doesn’t seem to be a big thing in France. If I’d been thinking, I would have stopped at the sporting goods store to pick some up. But clearly, I wasn’t thinking. My apologies in advance! That said, I hope you enjoy the show anyway. : )

For those of you who’ve emailed, asking how many episodes to expect, here’s the plan: we have one more Season 1 episode to share, and a possible bonus episode (or two!) as well. We share those over the next couple of weeks. For Season 2, earlier this month, we filmed 8 awesome episodes! They’ll start airing in late August or early September. We’re excited!

P.S. — Want to stay up to date on all things Olive Us? Go ahead and subscribe to the newsletter.