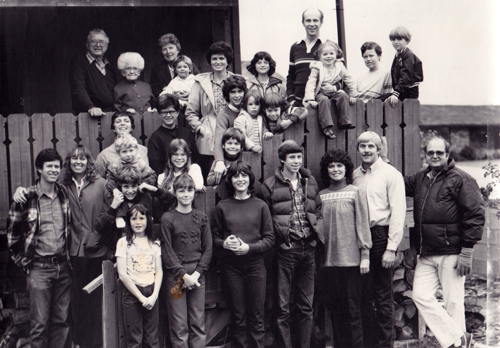 Since I’ve spoken freely about how this move has thrown me for a mental health loop, I’ve received dozens of emails with kind-hearted questions on the topic, with one of the recurring themes being surprise that I feel so open and shameless about what I’m going through. These conversations have left me thinking hard about what has formed my own views on mental health. And predictably, it turns out my views were formed by experience. Two specific experiences really. And I thought I’d write about one today, and one on another day.

The first experience was growing up with my aunt, Mary Lu, who lived with us. If I asked everyone out there who had a Crazy Aunt Mary to raise their hand, I know pretty much everyone would. But some of us had an actual Crazy Aunt Mary. Mary Lu had Paranoid Schizophrenia. She would hear voices constantly. Sometimes the voices said harmlessly crazy things. And other times they said horrible things. These are some of the thoughts and memories that come to mind when I think about her.

When we moved from California to Utah (I was 5 years old at the time), we built a house, and we built an apartment above the garage specifically for Mary Lu. She could live fairly independently, but my family was right there when necessary. She was part of our daily family life. [Side note: Man. I loved that apartment! It was small, but had everything you’d need. Many years later, when Mary Lu moved out, the apartment above the garage would eventually become a newlywed apartment for my sister, then a college apartment for my brother, and then an apartment for the local Mormon missionaries.]

Mary Lu shook. Constantly. Her hands and arms. Kind of her whole body. Her medication made her shake, so I was taught that if she wasn’t shaking, that meant she hadn’t taken her medication and that I should tell my parents. Every Sunday dinner, Mary Lu would join us, and the table shook the whole time. A shaking table was one of the not-normals that was normal for our family.

If you met Mary Lu, you would know immediately something was off. Her condition had no physical earmarks, but if you interacted with her, or even saw her, you would instantly know you weren’t dealing with an average citizen.

Mary Lu didn’t like a big crowd or lots of people, in fact, I’m sure our family of 10 was a challenge for her. But she would still spend time at our house — watching TV with a couple of us kids after school, or visiting with someone in the living room. And she was a fixture during holidays and Sunday dinners. When everyone left the dinner table to chat in the living room, she would find the conversations too intense and would end up back in the kitchen working on the dishes. Of course, everyone felt guilty that she was in there slaving away while the rest of us were enjoying ourselves, so one of us would join her in the kitchen and sometimes she would be up for chatting. But other times she wanted to be alone.

Sometimes her medication would be off, and something would be wrong and she would need to be checked in to a full-time care facility for a couple of weeks. And then she’d move home, to the apartment above the garage.

She wasn’t violent. My only memory of aggression was once when I was practicing hand-stands and it bothered her and she rushed at me to stop me. I was scared and she was strong. But I called out and she didn’t hurt me.

She was a fixture in our neighborhood and church. On the first Sunday of the month, which is sort-of open-mic day at Mormon churches, she would say crazy stuff. Like that she knows she was really adopted (she wasn’t), and that her birth parents were black (they’re not). That she hoped God would forgive her because her brother-in-law saw her in her underwear. (The story there was that My Uncle Pete had knocked on her door and then opened it to say, “Time for Dinner”, catching Mary Lu while she was dressing. But of course, the way Mary Lu told the story over the pulpit had the congregation wondering if my Dad was some sort of peeping tom. Good times!)

Mary Lu always had a bowl of little sugar-free hard candies (I have no idea why they were always sugar free, but they were). And all the neighborhood kids knew they could knock on her door for a treat. Until one Sunday when she innocently mentioned something about candies and poison in the same thought. After that (understandably, but still sadly) kids weren’t allowed to knock on Mary Lu’s door for candy anymore.

One of the things that just stops my heart is that there was no name for her illness when she was young. My grandparents were at a complete loss. And I can’t imagine how terrifying that must have been — not knowing what was wrong or how to help. Just to give you an idea, they lived in L.A., and as a child, Mary Lu once wandered away from school (yes, this was a different era) and walked onto the freeway, and rocked back and forth stopping traffic. But at the same time, she was in mainstream schools with no diagnosis.

Eventually there was a diagnosis. And medication. But the disease was new enough, the reality was that the medication was pretty much an experiment. And it wasn’t necessarily effective. (I’ve heard great strides have been made medication wise in recent years, which is wonderful.)

When I was 16 or 17, I was at my Grandma’s house, and Mary Lu was there. She was really, really, excited  to share some good news. She told me there was a new medication! That it was going to stop the voices!! I shared in her joy, then had to go outside where I wept with a new realization. For some reason, no doubt to comfort myself, I had assumed Mary Lu wasn’t really aware of her situation. She didn’t talk about it. She didn’t talk about being sick. In that conversation, for the first time I understood that she was fully aware of what her life was. And that she wanted it to be different. That she heard voices and she wanted that to stop. She must have been about 50 years old at the time. 50 years of hearing voices. (And sadly, the new medication didn’t work.)

When Mary Lu was stable enough, my grandparents bought her a small home in downtown St. George, where she could walk to the library and shops and live even more independently, and she moved out of the apartment above the garage. I went off to college not long after. But I would still see Mary Lu during the holidays and at family gatherings. Sometimes she would wrap up her half-used groceries — like an open box of rice — and bring them as gifts.

She died a few years ago. And I don’t think I even mentioned it here. I think I’m still processing the idea that she’s gone. And I still have a hard time making sense of what her life was. What it meant. Did she get to experience enough joy to make it worthwhile? Or was it a life of confusion and frustration?

Those of you who have seen sickness like this up close know that it influences everything. Where my grandparents could move. How they handled their finances so Mary Lu could be provided for — she lived till she was almost 70. My aunt, Mary Lu’s sister, went into psychology in college, simply because growing up with a sister who had schizophrenia informed her whole childhood. My mother built an apartment for her. It affects you. It affects life. I remember learning about genetics in school, and asking my mother if there was a high likelihood that my children would have schizophrenia.

At some point, I remember seeing a movie called Benny and Joon, featuring Johnny Depp. It’s about two schizophrenics who fall in love. And I remember being sort of angry afterwards. This wasn’t what schizophrenia looked like! It was not charming! It was not Johnny Depp! There was no falling in love!! I later learned that like most mental illness, schizophrenia falls on a spectrum; that Mary Lu’s case was extreme, and that there are others with paranoid schizophrenia who live more typical lives. [Side note: I recently saw Silver Linings Playbook, another movie about mental illness, in this case, bi-polar disease, and I felt those same angry feelings. Is that really what bi-polar disease looks like? Like Bradley Cooper and Jennifer Lawrence?]

Obviously, growing up with Mary Lu informed my view of mental health in lots of ways. For example, I learned the fruitlessness of arguing or reasoning with crazy. And honestly, I still try to apply that knowledge any time I encounter someone who’s not making sense. Don’t argue with crazy. I also learned what an extreme mental illness looked like, so I have a reference when I encounter mental illness around me, and in my own head, and have a better understanding of when it’s serious and when it’s less so.

But maybe what I learned most clearly, was that Mary Lu was blameless for her condition. I know my own mental health issues aren’t even a shadow of what Mary Lu experienced, but I suppose understanding her blamelessness, allows me to experience this depression without blaming myself. Without guilt or shame. No one ever said that Mary Lu simply needed to “pull herself together”. She was sick. She wasn’t at fault. And the topic wasn’t taboo.

I know mental illness touches everyone. I would love to hear what has formed your own thoughts and opinions on the subject. And as I mentioned above, another day I’ll share more on what has formed mine.

P.S. — The photo above is the only photo I have in my possession of Mary Lu. It shows my family and all of the cousins on my mom’s side. She’s the one on the stairs wearing glasses, the second of 5 siblings (my mother was number 3). Mary Lu wasn’t around for the cameras-everywhere-instagram-era. If she was alive today, I wonder if she would let me take her picture?