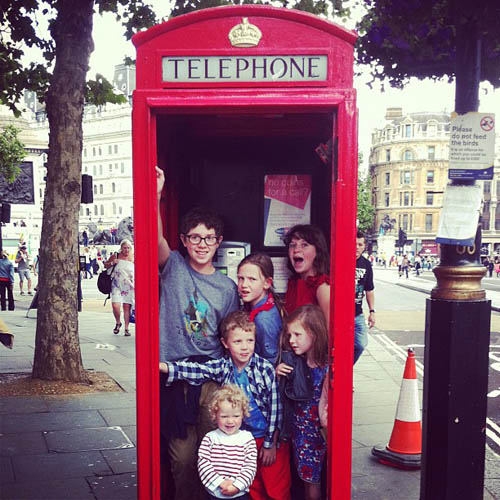 Oh my goodness! It was a quick trip, but so worth it. Here’s a little report on our trip to the Olympics in London accompanied by images from my Instagram stream. Note: we didn’t even have tickets to any events. Hah!

We drove in to the city Sunday morning. We looked into taking the train, but decided to drive instead and it was clear roads the whole way. We parked in a little parking garage at Thomas More Square, which is a short walk from The Tower Bridge. The parking lot was almost empty because it was a Sunday morning. Easy! 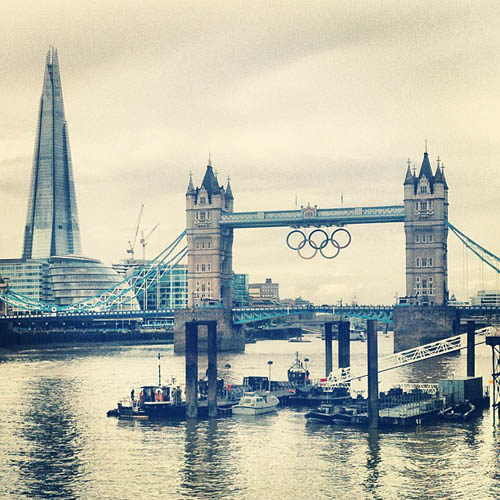 We walked to the river, emerged between two buildings and the first great view of the city was the Tower Bridge with the Olympic rings in all their glory! We gasped and cheered. What a sight!!!

Next, we walked toward the Tower of London hoping to get a glimpse of the women’s marathon. The turnaround point was right at the Tower. By the time we arrived, the marathon had been going for about an hour. 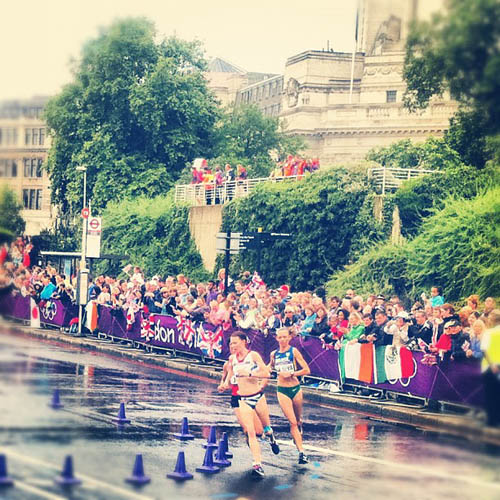 The kids climbed on our shoulders, and even on barricades so they could get a view of the runners. We could get really close! Between the 2nd and 3rd loop, the kids played on a playground nearby, then joined the crowd when they were ready to watch again. 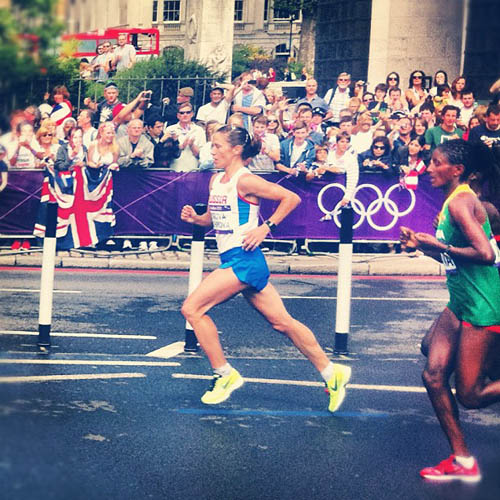 These 2 were top finishers on their 3rd loop. Gold (in green) and Bronze medals. They were full out running. Not “jogging” even a little bit. Dang, they are super strong! 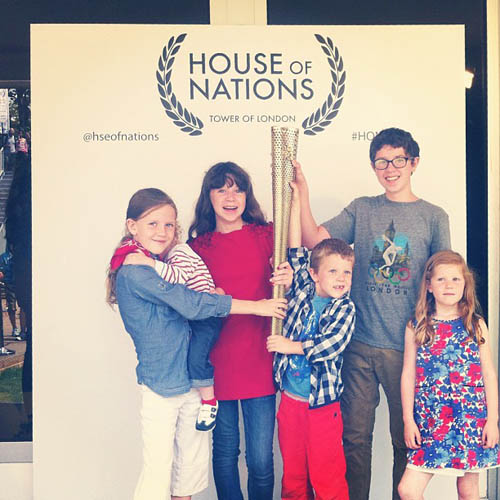 After the marathoners ran by for the last time, we went to the House of Nations event on the grounds of the Tower of London. The kids were able to hold the real Olympic torch! At least, we were told it was the real thing. Do you think it really is? 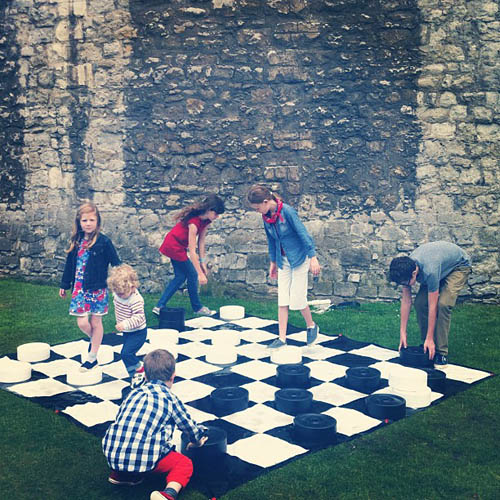 And they played giant checkers on the lawn with the Tower of London in the background. Awesome! 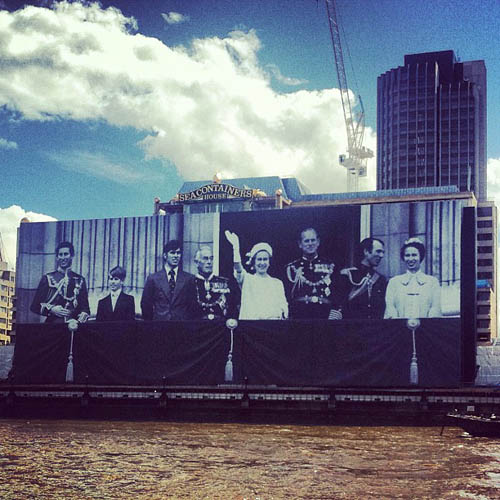 Next we stopped for ice cream and picked up tickets for the Thames Clipper — a ferry that would take use down to Westminster Abbey. This awesome, HUGE (as in 8 or 10 stories high) poster was on the river. Made me happy. Everyone looks so young. 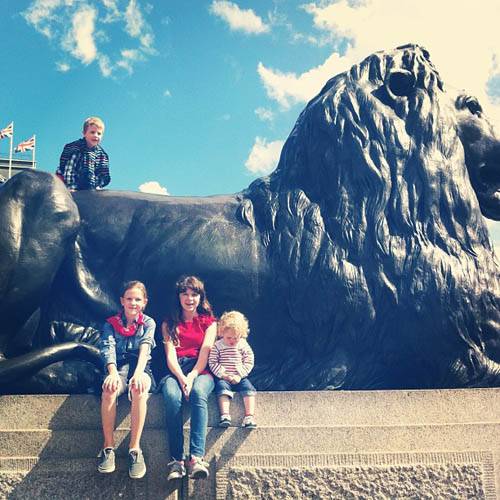 We waved at the London Eye and Big Ben after the ferry ride, then walked to Trafalgar square to say hello to the lions. 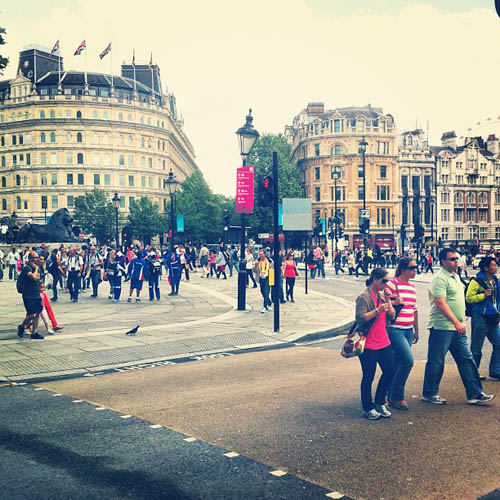 The whole area was completely car free because of the marathon. Pedestrian heaven! And such an unusual thing to see in busy London.

Next, we picked up Olympic souvenirs on Regent Street (with a quick stop at Hamleys too — how could we resist with 6 kids in tow?), then took 2 black cabs to Hyde Park. We were dropped off at Speakers Corner. On Sundays, Londoners can stand on a milk crate and speak their mind to the crowd. The man we heard was not too happy. He had strong opinions on Americans, Christians and the State of Israel. We just grinned. : ) 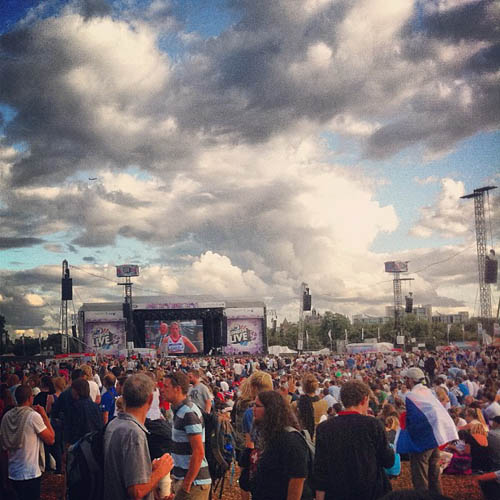 Hyde park was open to the public with huge screens for viewing events. We watched weight-lifting and tennis and grabbed an early dinner from one of the many booths. It was festive and fun with people picnic-ing and waving flags everywhere you looked.

After that, we started making our way back to the van, but we stopped in Piccadilly Circus to watch another huge screen. We saw Usain Bolt run his semi-final for the 100 meters. The whole intersection fell silent for those 10 seconds and then absolutely exploded with cheers. Sweet June was asleep in my arms and woke up with the hoorays. We loved being part of it!

From there, it was 2 black cabs back to Thomas More Square, where we hopped in the van and made it back to the motel just in time to see the 100 meter final on the  TV. Hooray! Maude said, “I love that the whole world holds still for those 10 seconds.” That’s what it felt like to me too.

Did you watch the final? Track and field is always my favorite part of the Olympics — most likely because I ran track in high school (sprints and long jump). 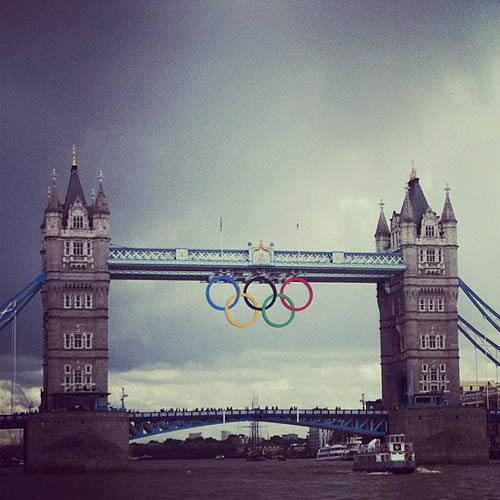 As I mentioned, we didn’t even have tickets for any events. We tried, but we couldn’t find enough for the whole family, and we weren’t in the mood to split up. But even so, it really was an amazing day! We were able to soak up the Olympic energy, cheer with the crowds, root for Team USA, and enjoy seeing the locals go crazy for Team GB. We’d do it again in a heartbeat.

How about you? Have you been watching the Olympics? Would you ever want to attend, or do you shy away from events involving big crowds?

P.S. — We stayed at a funny little roadside motel in Maidstone, about 45 minutes outside of London, but we heard later that great rooms, right in the center of the city are still available and can be scored on last minute sites like Hotwire. We didn’t even try, assuming they would all be sold out. Oh well!