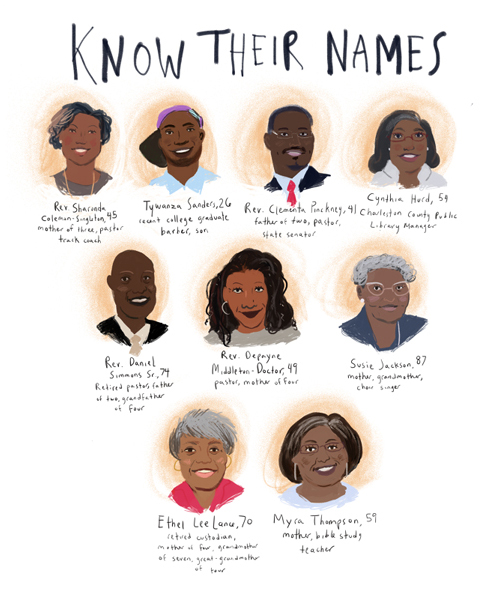 By Gabrielle. Illustration by Sarah James.

Last Friday, on my weekend link list post, I mentioned that I wanted to talk about the horrific Charleston shooting with you this week. As I stated then, I don’t know what to do. And I don’t know what to say either. There are deeply smart, endlessly eloquent people that have written, and continue to write, thousands of good, moving words on the subject of race in America, and specifically the brutal killings in Charleston. What can I add to the conversation? Well, probably nothing.

But that’s not the point.

The point is to have the conversation. To talk about this. To not just read and click “like” and move on. But to actually talk about this, to discuss it, to communicate about it. To share an opinion, and to be open to having that opinion change if necessary.

I can read something or follow a hashtag and shake my head in disbelief and shame, but if I don’t speak up and talk about this with everyone that falls within the sound of my voice (or the reach of my blog), then I’m adding to the problem, not helping.

Are you worried that you won’t say the right things? That you won’t be eloquent? Or worse, that you’ll say something offensive without even realizing it? Or maybe you fear you will be attacked? That people will argue with you, or tell you you’re wrong, or call you names?

Well. In this case, your fears and worries are not unfounded. When having these discussions, you’ll very likely say something offensive, sometimes without meaning to. It happens to lots of people. It has certainly happened to me. In fact, there’s a very high likelihood I’ll unknowingly say something offensive in this very post! And when I do mess up, I have to step back, apologize, humble myself, and shut my mouth for awhile while I just listen. But I’ve learned it’s better to take that risk and at least try.

Or perhaps you don’t speak up, because you think you’re above this, and that you’re not racist? Well if you’re white like me, then you very likely are racist. It’s so ingrained in white culture that we don’t even recognize it, and we emotionally collapse when it’s pointed out. The term “white fragility” is new to me, but in my experience it fits. Quoting from this article :

“Racism is the norm rather than an aberration. Feedback is key to our ability to recognize and repair our inevitable and often unaware collusion.

1. How, where, and when you give me feedback is irrelevant – it is the feedback I want and need. Understanding that it is hard to give, I will take it any way I can get it. From my position of social, cultural, and institutional white power and privilege, I am perfectly safe and I can handle it. If I cannot handle it, it’s on me to build my racial stamina.
2. Thank you.”

Or perhaps you don’t talk about racism around your kids because you want to protect them from the bad things that happen in the world? Well, I do understand the instinct there, but the reality is, if you’re not talking to your kids about race in America, it’s because you enjoy a privilege that many don’t.

If you’re raising children of color, you have to talk about race. It’s not a choice. You need to tell your kids what they can wear, what they can say, and how to behave so that they’ll hopefully be treated “normally”. You talk to them in the hopes that you’ll lessen the risk of your unarmed child being shot by someone like George Zimmerman, or by a police officer.

Or perhaps you read about these topics, but find the whole thing too depressing, so you ignore it or turn away? You’re not the only. It is depressing. It is exhausting. And how much are we as individuals bound to engage with it before we get a break? I noticed both Kelly Wickham and Luvvie Ajayi addressing this emotional overwhelm with calls for happy links and happy news. Talking about this doesn’t mean it has to be a non-stop discussion, but ignoring it isn’t an option.

Whatever our hesitation is about having these conversations, we simply can not let our worries and fears about being called names, or being argued with, or being put down, silence us. Our friends, our community members, our fellow citizens are being harrassed, marginalized, and killed. Simply because they are not white. The fear of being called a name is not much of a fear compared to the fear of being shot when pulled over for a traffic violation.

So what do you do? Well, as I’ve said, I don’t know what to do. Sometimes there is an action we can take. People signed petitions to have the confederate flag removed from the South Carolina state capitol. And hooray!, the governor responded. And we can always share an article or repost something. There are probably foundations we can donate to. All good things. But really, if we truly want to help, we can’t avoid the hard work of speaking up.

So let’s have a conversation. Let’s discuss. We can discuss it from any angle you like, and here are some questions that might help prompt the discussion:

– How often does a headline like Charleston or the topic of race come up in your home? Or in your day-to-day conversations?

– What have you read or seen lately that helped you think of the issue in a new light? Please share the link!

– Do you “un-friend” the people in your feed that disagree with you or say racist things, instead of trying to talk to them? I’ve done it. But I probably shouldn’t.

– Have you ever come up with a good example of something like white privilege, and been able to explain it effectively to someone who typically disagrees with you?

– Do your schools have programs that seem to be helping? If yes, what’s working?

– Are you trying to figure out how to be an ally to the black community?

– Where does the issue of racism overlap with the issue of violence and poverty for you? Do you see the Charleston shooting as more of a gun control issue?

What’s on your mind? I look forward to discussing all of this with you and more. Let’s talk.

P.S. — This #CharlestonSyllabus is a great resource for anyone wanting to read more on the topic of race and the role it plays, and has played, in America.