How To Build A Giant Table 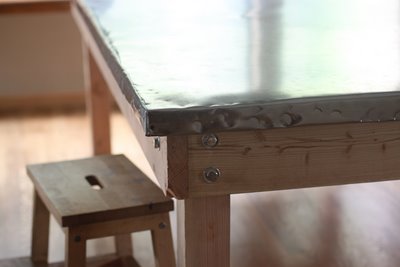 Okay friends. Here it is. My attempt at instructions or at least an explanation of how to build the giant table. With lots of photos. And more notes than you probably want. If you’re nervous to try it, remember that all I had to go from is some sketches I’d made on a legal pad and the picture of the table from Downtown Chic. So you’re already way ahead of me. FYI: the finished table measures 33″ high x 53″ wide x 107″ long.

A full sheet (60″ x 114″) of metal from Denver Heating & Air Conditioning. Before we left, they used their industrial metal folding machines to make a 1/2 inch lip around each edge so that we didn’t cut ourselves while handling the metal.

Costs:
-The lumber was just under $80 at Home Depot.
-The sheet metal was just over $50.
-My nephew already had some long screws (about 4 inches) and a box of black nails.
-We eventually decided we would want to attach the legs with bolts, so that we could easily remove the legs. Sixteen heavy-duty bolts and washers, etc, were about $50 at the hardware store.

Once we had the materials assembled, we built the table top base. (And I should note, whenever I say “we” I mostly mean my nephew Josh.) 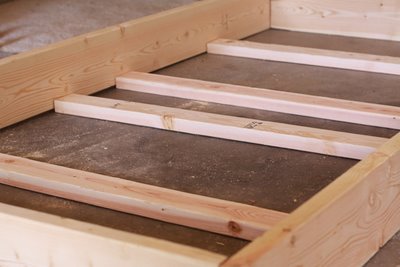 We formed a rectangle using all four of the eight x two boards. The short pieces went inside the long pieces. We secured this box together at all 4 corners with 4 inch screws. 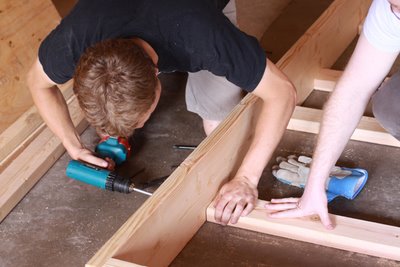 Once the outer rectangle was formed, we laid the six 46″ two x fours across the bottom. We attached those with screws from the outside. Then we flipped it over. 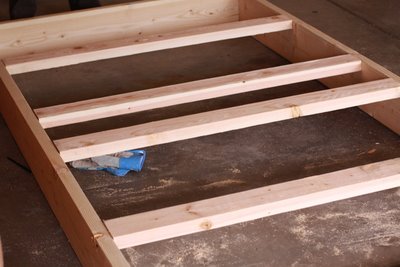 Next, it was time to attach the top surface of the table — the wood we would eventually attach the metal to. We couldn’t buy a single piece of plywood that was big enough, so we used 3 pieces. Two large pieces and one small one in the middle.

We attached the 3 plywood pieces to the table top base by screwing into the two x four boards through the plywood. Once attached, they formed a rectangle that measured 53 inches x 107 inches. 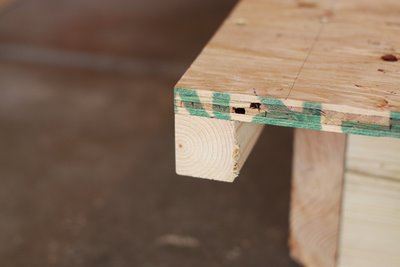 When the plywood sheets were securely attached, it was time to add a lip around the edge — something to wrap the sheet metal around. We used lengths of two x two board, held them in place with clamps, then screwed in through the plywood to attach them. 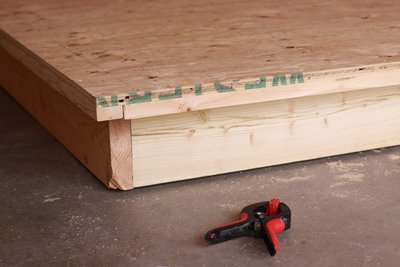 We laid the piece of metal on the ground, top side facing down. Then placed the upside-down table top base on top of the metal. 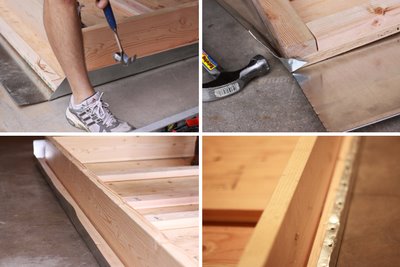 With the table top complete, we moved it into the room where it would eventually live. (It’s incredibly heavy. Seriously.) And then we attached the legs. 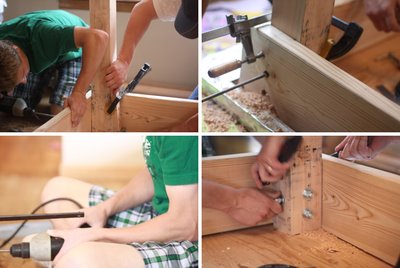 The fence posts were nestled inside each corner and secured with clamps. Then we drilled four holes through the table base sides and completely through the fence posts. Two holes on each side. For each leg, four bolts went through four holes and were secured with nuts and washers. If/when we ever have to move the table through a doorway, it will be easy to remove the legs. 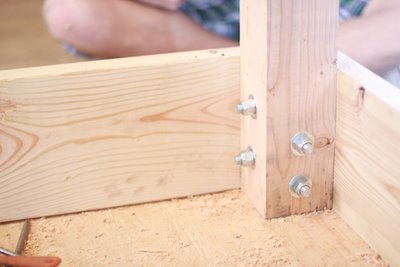 And that’s it. We turned the table on its feet and it was ready to use.

Except. A few days later, we realized some air pockets had formed between the metal and the plywood beneath. So we did a pretty major fix. Josh’s whole family came to help out. We took out every single nail and removed the metal top. We squirted three bottles of Gorilla Glue onto the backside of the metal, spread the glue evenly and placed the top back on the table. 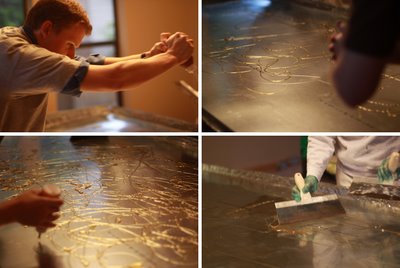 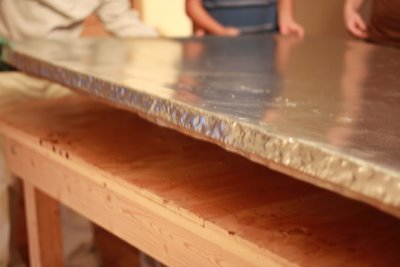 We weighted the metal top down with every heavy thing in the house we could find. A couple of cinder blocks. Books. Boxes of files and papers. (Luckily, Ben Blair is a PhD and has oodles of boxes of paper and books.) We let the glue dry overnight, then removed all the weight and re-nailed the metal under the lip. Obviously, if we were building again, we would have done the glue part before we hammered and nailed the metal the first time. 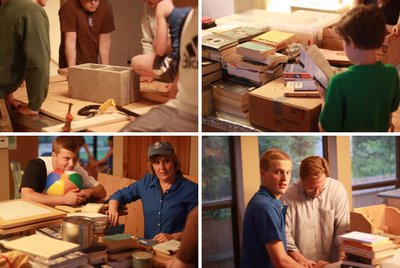 Other Notes:
1) Our table is at a non-regular height. 30″ is standard table height. 36″ is standard counter height. Our table is 33″ and works best with a 20″ workstool. If you wanted a higher table, you could just use longer pieces of fence post. You could make the table shorter, but you might not be able to sit around it comfortably because the two x eight boards extend down quite far — making it hard to tuck knees under if you were sitting on a standard height chair. If you want a standard 30″ table, you would be wise to use two x six boards instead of two x eight boards.

2) Since we didn’t really know what we were doing, I intentionally picked a table style that would be rough and allow for building mistakes. Let this give you courage if you attempt a table as well. The more scratches, rough spots and gouges the better.

And that’s it. Amazing! We still haven’t aged the table and are considering our options. I’ll definitely report back when I decide what to do. If you end up making a table too, please let me know. I’d love to hear how it turns out.

Josh, the main builder on this project (and the handsome guy in the blue polo shirt here) started a two-year proselyting mission yesterday. I know it’s only been a day, but my whole family already misses him like crazy. Thank you, Josh!