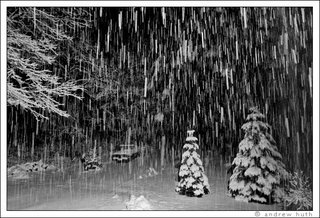 Last Thursday at 11:00pm we called our hotel in Toronto to let them know we would be getting in at about 1:00am instead of midnight and to ask them to hold the room because we were driving through a surprise snow storm. A half an hour later, at 11:30pm all traffic stopped ahead of us.

We didn’t move another inch until 7:00 the next morning, when one by one, each car dug itself out of two feet of snow that fell during the night, and headed down the freeway.

The storm was so isolated that by the time we came to Niagara — a few minutes away from Buffalo — the only sign of the storm was the snow on our VW.

You can read more about the storm here.