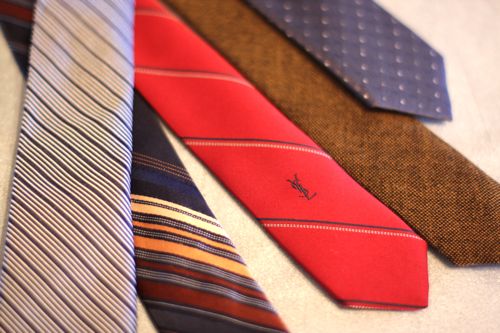 One of Ralph’s requests for his birthday was skinny ties. They are surprisingly hard to find — either too long or too expensive for a 13-year-old’s wardrobe. So a few weeks ago, I had an idea: I would buy some old fat ties at a thrift shop and take them to a tailor to have them altered. Brilliant, right?

But then, of course, I forgot about the idea till 3 days before his birthday. At which point, I tried to rush and make it happen. I found 5 great ties at Goodwill and sped them to the tailor. There, I was told it would take 10 days and cost $37 each to skinny them up. Blech.

But since I had the ties in hand, and since they only cost $1 each, I figured I’d try it myself. If I failed, oh well, a $5 failed project is not the end of the world. As it turns out, the first one ended up great (it’s the silvery striped one above)! So I took pictures while I remade tie number two — and now I can share the instructions with you, in case you’re curious.

Here is the before shot. In the tutorial, I took the polka-dot tie and made it as skinny as the stripe tie: 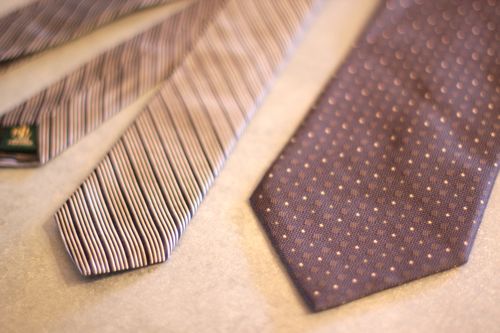 Here is the after shot: 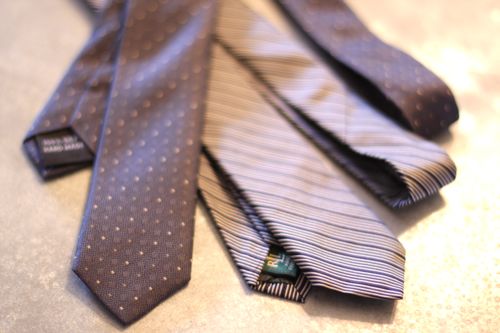 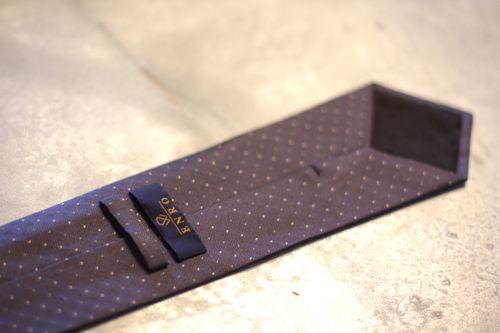 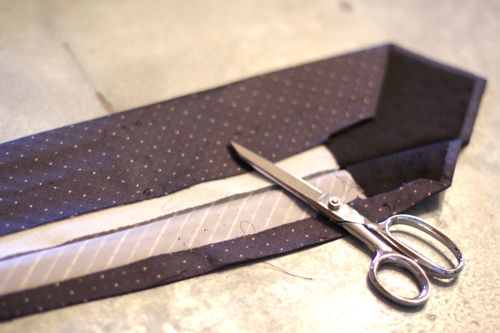 Keep un-stitching till you get to the skinniest part of the tie: 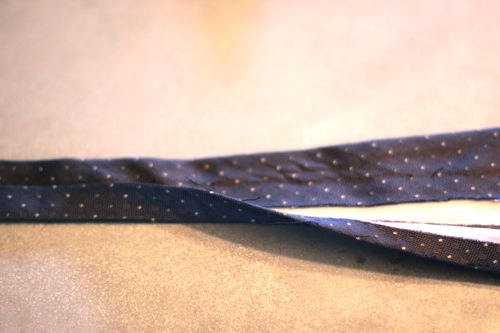 2) Pull the tie form fabric out of the lining (there is probably a real name for this, but I don’t know what it is). This is the piece of the tie that helps keep the tie shape. 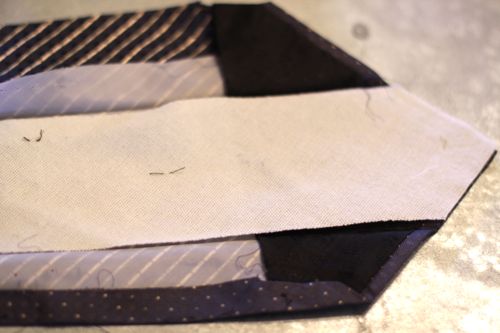 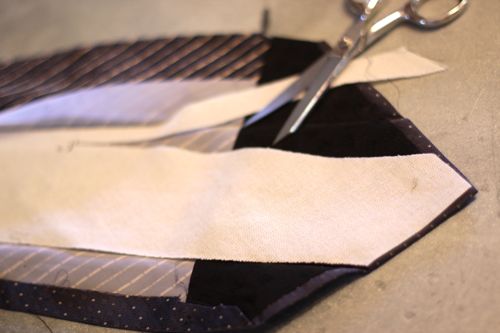 4) If you traced it, then cut out the second side. If you’re free-handing it, turn the cut piece upside down to get a matching cut on the second side: 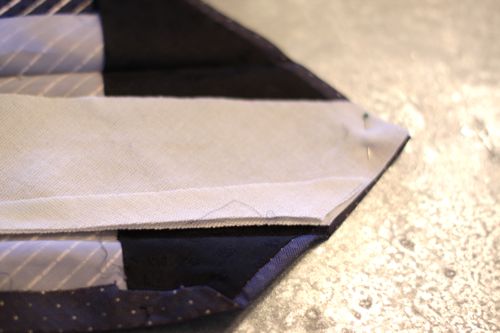 5) Your tie-form material should now look like a skinny tie. Tuck it back into the lining: 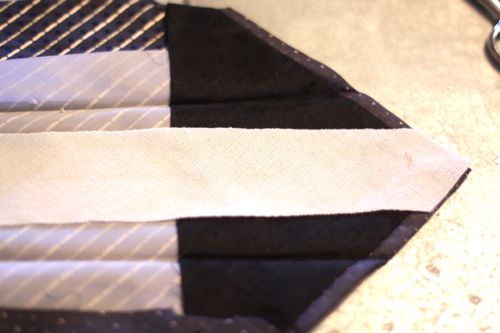 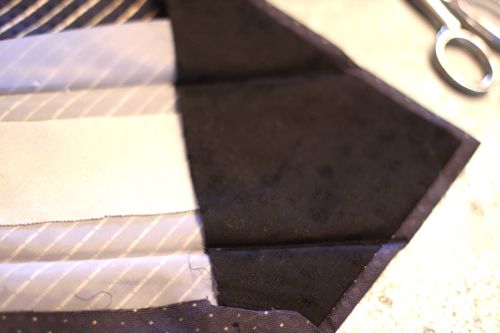 6) When you unstitched the tie, one side was overlapping the other, Starting with the side that was being overlapped, trim off some of the silk, tapering the trimmed piece as the tie narrows: 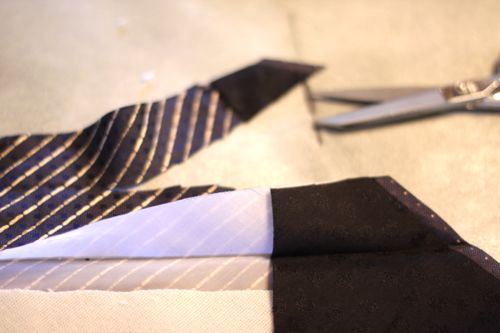 7) With an iron set for silk, press the trimmed silk so that it folds itself along the tie-form fabric: 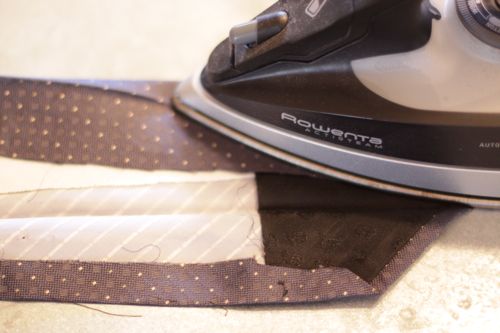 8) Fold under the cut edge and iron again, so that the ironed piece is narrower than the tie-form fabric: 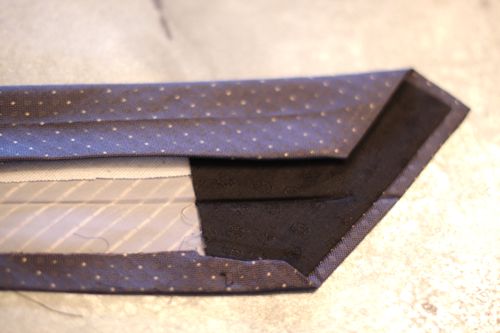 9) Now it’s time to iron the second side. Note: you may not need to trim the silk on this side: 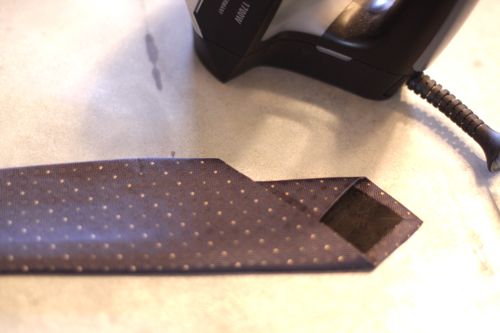 10) Tuck under the edge of the second side and iron once more. Aim to get the seam in the middle: 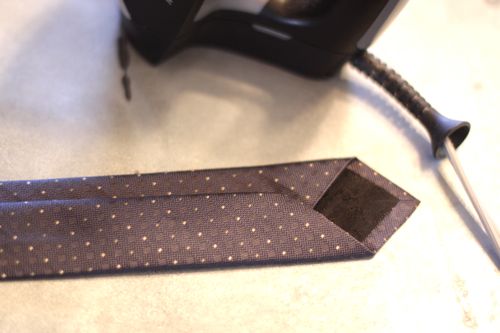 If you turn the tie over, it should now look like this (but don’t iron the front, you might damage the silk): 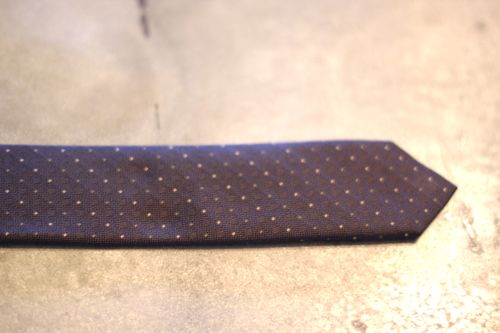 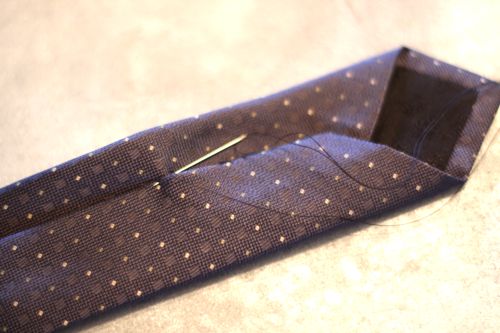 12) If your tie came with a piece for tucking the tail into, you can reattach it now: 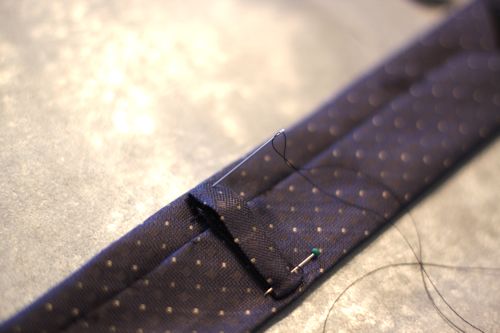 And that’s it! In case you’re curious, the first tie took me about 45 minutes. But the next 4 only took about 30 minutes each. I turned these: 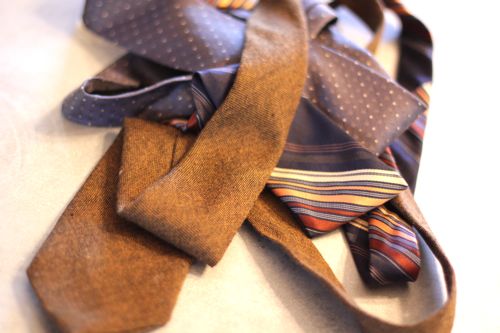 Other notes:
-Three of the ties I worked with were silk. One was wool. One was polyester. The silk ties were by far the easiest to work with.
-Ralph LOVES his new ties.
-Also, as I progressed, I got better at getting the new back seam centered. The navy and brown stripe tie was my last one and it’s the best as far as the back seam goes: 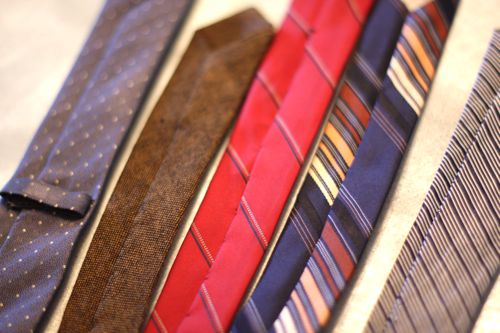 I hope you enjoyed the tutorial. Happy sewing!

P.S. — I like this image because it shows two of the dated tags. They remind me of my Dad’s ties when I was growing up: 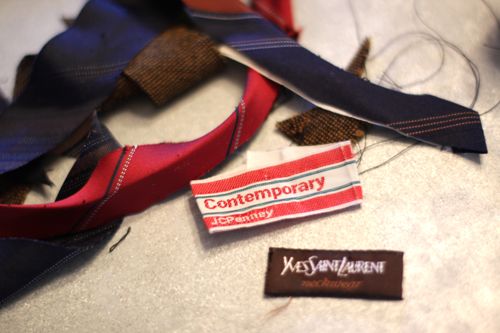