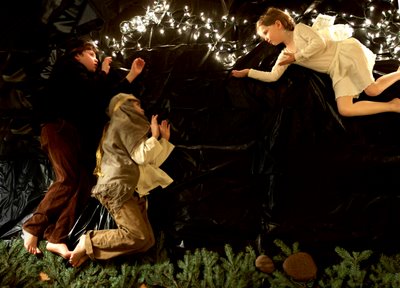 Remember these awesome photos by Jan Von Holleben I linked to a couple of weeks ago? Well. I also shared them with my kids. Up on seeing them, their brains almost exploded with the possibilities. They immediately started suggesting scenarios and similar photos. So Ben and I figured we could use Jan’s brilliant technique and create an image for our Christmas cards — satisfying our kids and checking our cards off the holiday list in one fell swoop.

We’re not sure if this is the final shot yet, but I share this with you now in case any one out there wants to try something similar in time for Christmas. Very fun. Very satisfying. And it gets better with each try. Here is the progression of our attempts and a few tips we learned along the way.

1) The content. We wanted to take advantage of the flying aspect, so we decided the angel speaking to the shepherds would be perfect. We call the image: Unto You a Child is Born! We also immediately decided the babies wouldn’t get to be in this particular image. Neither one can hold still for even 2 seconds.

2) We practiced without a real backdrop, standing on the couch and staging the kids on the area rug, just to see if we could get the hang of it before we committed to more work. 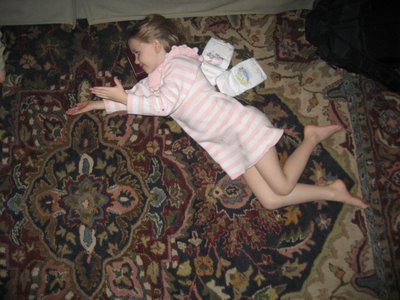 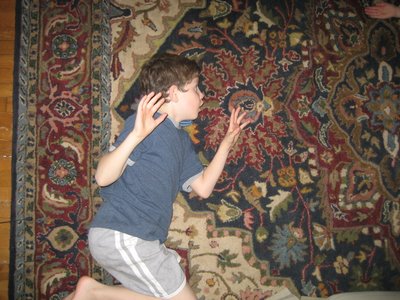 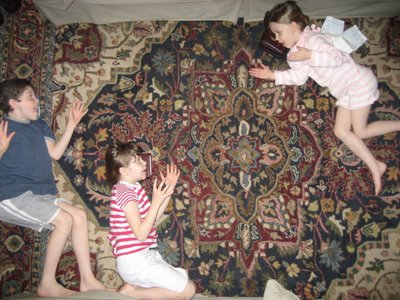 3) Next we attempted the photo with the backdrop. Initially we tried to use the black pavement of our driveway for the night sky, and the grass that meets the driveway as the ground. But it was just too cold the day we shot the photo, so we moved it inside. 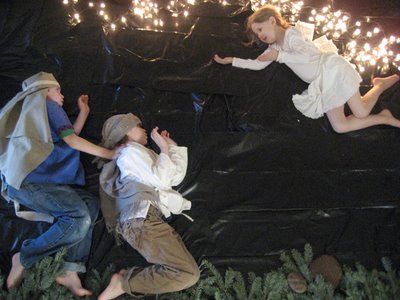 4) We shot indoors in the afternoon and there was still plenty of light. We used rolls of black garbage sacks for the backdrop. (The garbage sacks were kind of hard to work with. I think the driveway would have been easier.) We stood on a ladder to take the shots. One thing I really liked about Jan’s pictures is his use of every day objects as props. We tried to do the same, using diapers for the angel wings and keeping the costumes simple.

5) We love our little Canon Elph. But it’s not a real, real camera. So we could only get the photo so clear. At which point, we called for a favor from Guest Mom Sara’s husband, Travis Stratford. He came with his awesome camera and awesome camera skilz and we shot again. This time at night. Can you believe how much clearer his shot is? Awesome.

6) We are trying to decide if this is the final shot or if we should make one more attempt. Things we would change at Travis’s smart suggestion: make Ralph’s clothes more contrast-y against the black. And mess with the light sources so that angel Olive looks like she’s illuminating everything else.

7) A few last notes. The kneeling and standing were harder to pull off than the flying. The whole project would have been easier if we’d changed the title to “Angels We Have Heard on High” or something like that and had all the kids flying. And if we’d kept shoes on our shepherds that would also have helped. The shoes help keep their feet straight.

If you attempt one, I hope you’ll share. We can start a flickr group of Jan Von Holleben knock offs.