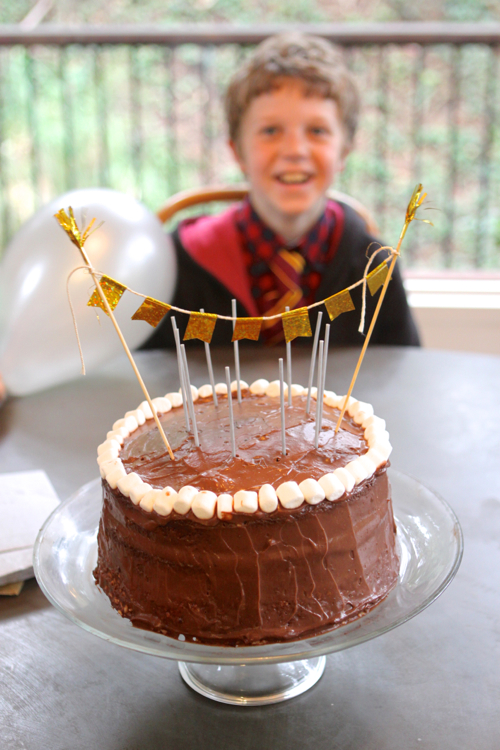 As I mentioned last week, Oscar’s birthday was on Saturday, and I thought it would be fun to give a little report. But more than the report, I have birthday parties on my mind and wanted to discuss them with you. I’m kind of worn out of them. Anyone else? I think it’s time for me to figure out a new strategy.

I’ve mentioned this before, so it may be familiar to you, but early in our growing-a-family stage, when I could see we were going to have a lot of kids, we put a sort-of “birthday party plan” in place. Certain birthday traditions would be consistent every year (breakfast in bed, putting up decorations, birthday cake with candles), family parties would be the default, and friend parties would be spaced out and would only happen at certain ages. I need to go review my notes, but I think we decided on ages 3, 5, 8, 12 and 16 for friend parties.

That worked pretty well for a long time. But in the last few years, we’ve had to switch things up. There are two main reasons. First, we’ve had some big moves. And depending on when the move happened, a friend party might not make sense. For example, we moved to Oakland a few weeks before Ralph turned 16. I always assumed we’d throw a big party when Ralph turned 16, but here we were, just moved to Oakland in the middle of the summer, and none of our kids had any local friends yet! So we made alternative plans. You may remember, we set up visits for film-loving Ralph at Lucas Studios and Pixar Studios. He felt celebrated, but a friend party just wasn’t in the works.

The second reason is that over the years, even though we’ve spread them out, I’ve started to lose patience with big friend parties. I’m not sure what it is. And I’m actually a bit conflicted about it. For many years, I really loved putting together a birthday party. The birthday kid would pick a theme, and I’d get to think of cute details and creative activites. It was always a fun thing to work on with my kids. You could see their imaginations going and see their eyes light up as they pictured the party. We never did big budget affairs, but it was fun and creative. And there was something like a high after throwing a good party.

But then something changed in my head, and it’s like I’m just craving a tiny gathering of friends, the simplest decor, old school games — like button, button who’s got the button — and a traditional cake. And for the finale, maybe we make hats out of newspaper (except we don’t even subscribe to a newspaper!). It’s like I’m picturing a Depression Era birthday party or something. I’m not sure what’s going on.

And this simpler vision? It’s not really real. Because I still love the planning part. I still love brainstorming with the kids on how to apply the theme to food or party games. My kids have amazing ideas! I still love the creativity of the whole thing.

I get really excited for them during the planning stages, and then I get progressively stressed out as we start to execute the plans. Picture me talking like an old codger, muttering about wasting time and money. Probably it’s me turning into an old, grouchy person. I’m not sure.

Is there anyone else yearning for really simple birthday parties? Is it a stage of life thing? Have I just maxed out my parenting creativity? My parenting energy? Or perhaps I’m just worn out this month in particular — January equals holiday stress followed by Alt Summit. Will I feel differently in March when our next birthdays come? Is it the age of the guests? Would I feel more excited planning a party for teenagers?

What’s your take? How do you handle birthday parties? Do you love them? Host them every year? Space them out? Avoid them altogether? I’d love to hear!

And, I really do have a little report on Oscar’s party. If you’re curious, feel free to keep reading. 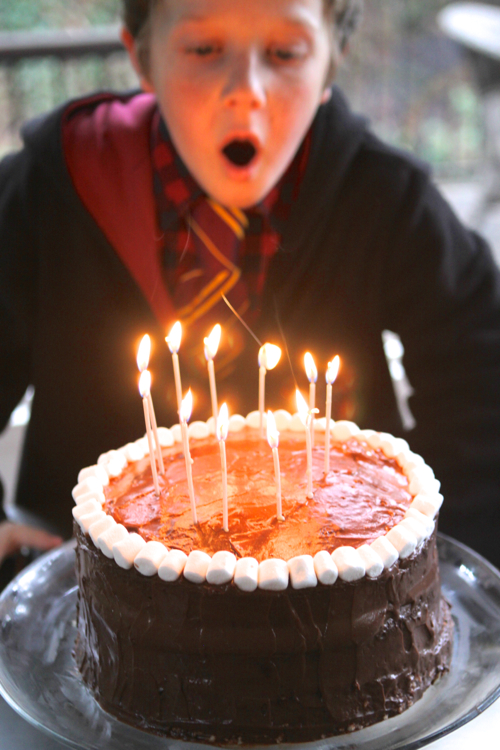 Oscar was turning 11, which is not on our usual friend party schedule, but he hadn’t had a friend party in ages, so we all thought it was high time that we invite his friends over. We really like Oscar’s friends — a good mix of kids from school and cub scouts and church.

Oscar is definitely in the tween stage. He liked the idea of a theme for the party — Harry Potter — but didn’t want the whole thing to be super planned out. He informed me that “11 year olds really like to just hang out.” 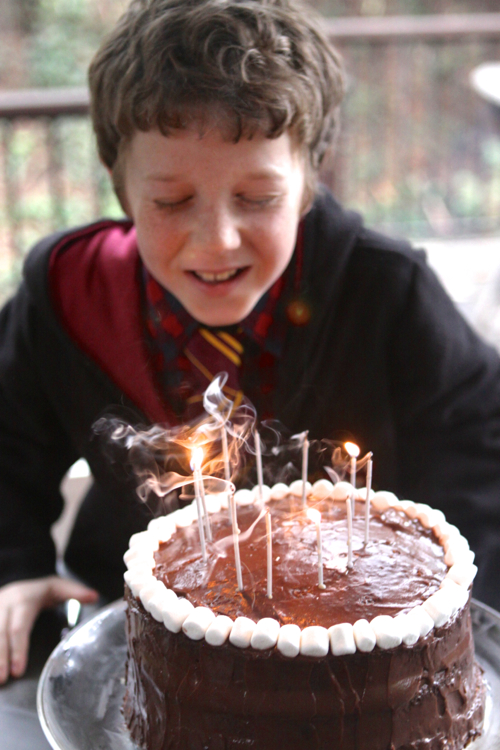 So over the Christmas break, we started planning. We made a long list of awesome ideas, which included making a giant Golden Snitch piñata — filled with gold-covered chocolate galleons and those Lindt truffles that look like golden snitches. The list also included things like an elaborate Sorting Hat ceremony, sewing wizard robes for everybody, and a full Harry Potter themed menu. It was super fun to make the plans. But as I mentioned above, when we started actually taking action on the plan, I rebelled. I was resistant to spending a ton of energy on this party, when really, Oscar just wanted to hang out with his friends.

At that point, we scaled waaaaay back. Here is the basic schedule we ended up with:

12:40 – Make Butter Beer & Ask Harry Potter Trivia Questions
We used this recipe for the Butter Beer, and Maude led out on this activity. I’ve never been to Harry Potter World and don’t know what official Butter Beer tastes like, but this version was delicious! While we made and drank the butter beer, Ben Blair asked the kids Harry Potter trivia questions.

1:15 – Make Wands & Hang Out
Wand making is an awesome activity but it can take some time. Waiting for hot glue to cool. Waiting for paint to dry. So the kids went back and forth between the family room and the studio (which are side by side). In the studio they would work on their wands, and in the family room, we had the first Harry Potter movie showing on the TV, and the kids could hang out, or play chess. Then they might go work on their wands again. 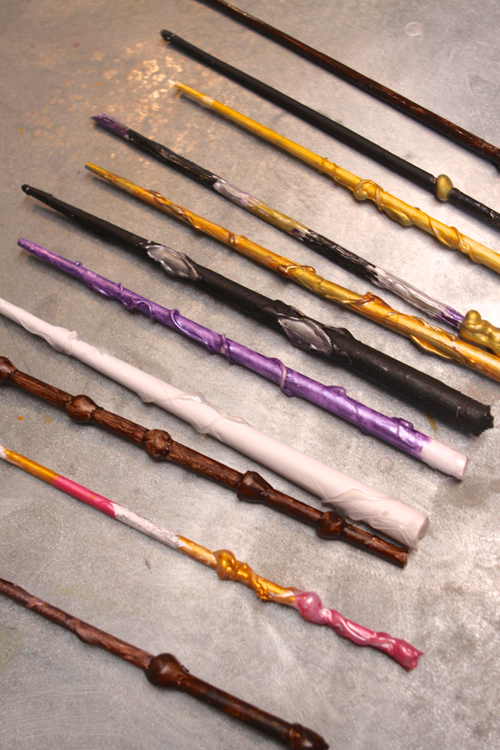 Sidenote, these wands are amazing! We’ve been making them for years and they are one of my favorite crafts to make with kids, because they are cheap, easy, and they look so cool! They’re essentially just hot glue and a piece of regular 8.5 x 11 paper. We keep those materials on hand so it feels like a totally free activity when we make them.

2:10 – Play Harry Potter Mafia
As the wands finished up, Ben Blair led the kids in a game of Mafia, but with Harry Potter names. So instead of Mafia, Police, & Citizens, it was Death Eaters, Order of the Phoenix, & Muggles.

2:30 – Cake & Presents
After Mafia, we went back downstairs for birthday cake. Oscar likes to request unusual cakes. This time he wanted a chocolate cake with a thick layer of rice crispie treats at the bottom, and he wanted the whole thing frosted with chocolate pudding. Olive made the cake and it turned out wonderfully! 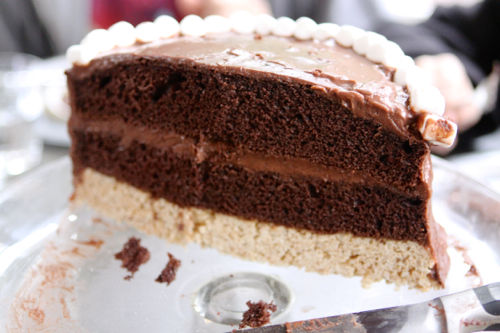 And that was the whole party. Oscar was delighted! The guests seemed to have fun. We kept it very, very simple. Basic decor, no big expenses, lots of free activities like Trivia, Mafia, Wands. And still, I confess, I was so dang exhausted when it was done. Hah! If a simple party can still wipe me out, I’m left to conclude I’m too old for this! : )