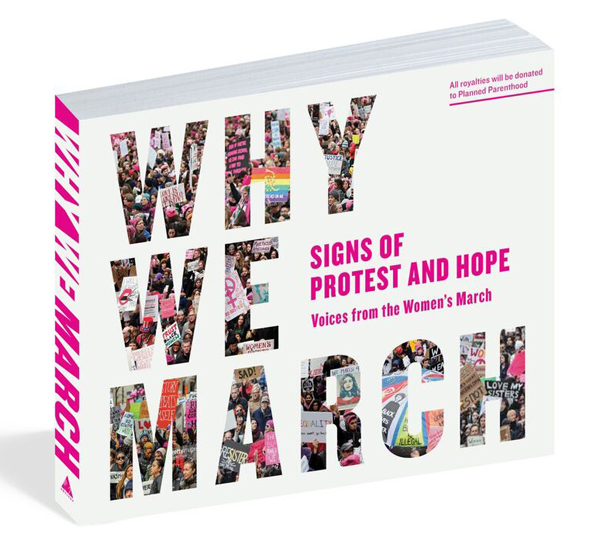 You may have noticed: There has been a lot of marching in the last few weeks! The Women’s March. The March for Life. Marches for Refugees. Have you had a chance to participate? Or perhaps you feel all this marching is a waste of time?

I’d love to discuss these marches with you today. Related, I want to tell you about this amazing project my publisher, Lia Ronnen put together. Lia is a long-time New Yorker and took part in the NYC Women’s March last month. She was so moved by the experience, that she had her staff at Artisan Books stop everything for a few weeks so they could put together a book called Why We March, which features significant signs from the event. That they were able to do this so quickly is remarkable, because Artisan is a slow-and-steady book maker. They favor quality over quantity and never rush their authors. Such an accomplishment that they were able to produce this so quickly!

I can not wait to get my hands on a copy. You can pre-order here, and they will start shipping on March 1st. I’m super proud of Lia and the whole team at Artisan Books.

But back to my thoughts on the marches themselves, starting with the Women’s March. I didn’t get to participate that day because I was attending the military promotion of my brother-in-law, Paul Rodgers, who was made a Colonel in the Army. I was broken-hearted to miss the march, but was glad to enjoy a different sort of patriotic event that day.

Even though I couldn’t take part, I followed as closely as I could and supported in any way I could think of — sharing posts on social media, cheering people on in the comment sections, sending texts and emails with love.

Ben Blair would text pictures of the kids working on signs and t-shirts for the March in Oakland. He called me to tell me how festive the atmosphere at Michael’s craft store was the night before the March — he said it was full of people buying sign making supplies! Everyone in a good mood, lending each other a helping hand.

At the promotion festivities, which took place at Camp Williams in Utah, my nieces and sister and aunt were watching the Women’s March closely. During breaks, we would be on our phones, reading clever signs to each other, and sharing links. Lots of laughing and tears. We were wowed at the numbers being reported from cities across the country.

It was really emotional. I wept openly at points throughout the day. Seeing the numbers swell — in every case, more people than expected. Far more people! I was deeply moved. To see such a variety of human beings come together across the whole country! Even in tiny towns! I cried when I saw that my hometown, St. George, Utah, had even held a march.

And then, when I realized people were marching across the world, on all 7 continents, not just America. Oh man. I’m crying again just thinking about it! I was so touched. Would I be willing to march for people in another country? On a cold winter’s day? In Antartica?! Amazing. As pictures poured in from across the world, I was a mess of goosebumps. They saw it might have been the biggest movement in history!

I cheered as I saw nieces and siblings and friends taking part in far-apart cities. I loved sharing that connection with them. There was more cheering and more tears when Ben Blair sent video of my own kids marching. I ached to be with them.

Yes, I know it wasn’t all sunshine. My mother-in-law, who I adore, saw a news segment focusing on signs with vulgar messaging. The segment gave the idea that the whole march was vulgar, and it left her with a negative view of the event. It broke my heart that this segment clouded the beauty in it. And my own mother wasn’t interested in participating in the Women’s March either.

I also know not every woman felt included, and there were discussions that perhaps the march should have had a different name.

I know there were smart and well-written analyses and criticisms of the Women’s March after the event. I probably read them all. They talked about what went right, what went wrong, and what could have been better. I realize it wasn’t a perfect event.

Obviously, everyone has the right to form their own opinions of that day. But for me personally, it was a sacred experience — even just watching it! I wasn’t even there! I cherish what I felt that day, and the bonding moments that took place. I find myself treasuring that experience and holding it aside in a little protected pocket of my heart; I’m able to discard the negativity and criticism, and just enjoy the beauty of that day.

I mean, did you hear this song? So good.

Since that day, there have been other opportunities to march or protest — in fact, I was able to join the crowds of protesters at the San Francisco Airport when the Refugee Ban was first instituted. I’m sure many of you have been involved in the marches as well, or maybe just watching from afar.

I’d love to hear your thoughts and experiences on the marching and protesting over the last few weeks. Have you participated? If yes, did you involve your kids? Did you make any signs? What did they say? I’m also curious to hear from those who are reading, who feel the marches and protesting are at best a waste of time, and at worst harmful. What are your thoughts?