Do You Wear Your Wedding Ring? Does Your Spouse? 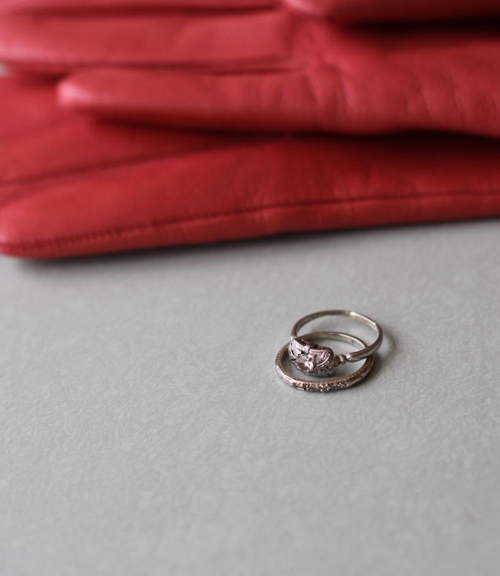 Last night was my book launch party! It was fantastic and I can’t wait to tell you all about it. But this post isn’t about that. It’s about wedding rings. Since I knew I would be signing books last night, and my hands would be out in front of people, making sure my nails were presentable was on my checklist for the evening. My current nail polish has been in place for over a week, but it’s a shellac manicure so luckily, it’s still looking good, and I didn’t have to make any changes. Which was great, because I wouldn’t have had time anyway. Hah!

But I realized about halfway through the signing that I wasn’t wearing my wedding rings. It wasn’t a huge surprise, because I don’t wear them on a day-to-day basis, but I like to put them on when I’m going out. I didn’t start out married life planning to not wear my wedding rings. Honestly, I never really gave wedding rings much thought. And I’ve never shopped for a wedding ring or learned anything about diamonds. Though I’m sure I just assumed I would wear one when I was married. But it turns out I don’t.

There are a few reasons. First, is fear of loss. My wedding rings previously belonged to my grandmother, Daisy Stanley, and I’m honored to own them. They’re pictured in the photo at top and I love them! But when I first started wearing them, I was always worried about losing them — specifically about having to tell her if I lost them. About a year into our marriage, during our senior year of college, we moved to Athens, Greece for a semester. And we ended up traveling around as much of Greece and the rest of Europe as possible. Traveling means staying in lots of different hostels and hotels and I was quite sure I would end up leaving the rings on a bathroom counter or nightstand as we rushed off to catch a train. So I picked up a simple silver band at an outdoor market, and wore it instead. And I kept Grandma’s rings safe at home.

The second reason, is because when I’m in the middle of a project that requires my hands (and I’m very often in the middle of one of those projects), having any jewelry on my hands bugs me. I think it has to do with hand washing. If I wash my hands with my rings on, then dry my hands, I get irritated by the feel of the water under the rings that the towel doesn’t quite reach. If I take my rings off to wash my hands, I’m quite likely to forget them, and the rings are at risk of being lost.

So, while I started out wearing my wedding rings, around the time we moved home from Greece and baby Ralph arrived, (and handwashing increased!), I wore rings less and less.

The third reason has something to do with my need to simplify my life as each child arrived. Somehow, when life was overwhelming during the newborn stages, jewelry became a burden instead of something fun. Unless it was a special occasion, I wouldn’t wear rings. And that has kind of become the norm. I can’t say I never wear my wedding rings or other rings at all. I have some really beautiful pieces, and at a conference, or on a date, or for a photoshoot, it’s fun to pick one (or several) out to wear. But 95% of the time, my fingers go jewelry-less.

The last reason I don’t wear my wedding rings daily is more of a subconscious resistance. I know the nature of wedding rings and the meaning around them has changed over the years, but it seems like there’s an underlying idea behind wedding rings of somehow being “bought” by a husband. Or that the size of the ring is supposed to prove the amount of love. Both ideas make me queasy in a bad way. The funny thing is, I’ve never looked at another woman who is wearing a ring and been even slightly bothered that the ring was a gift from her husband or partner. In fact, I like seeing people’s pretty wedding rings — it’s fun to see the different styles and hear the stories behind them. So clearly, this is just a personal hangup I apply to myself.

And now I’m curious. What’s your take on wedding jewelry? Do you have strong opinions about it? Did you pick out your own ring or did your partner? Do you have both an engagement ring plus a band? And if yes, do you wear them both?  Do you wear your wedding ring or other rings daily? If you’ve never married, but plan to someday, do you think you’ll wear one? I’d love to hear!