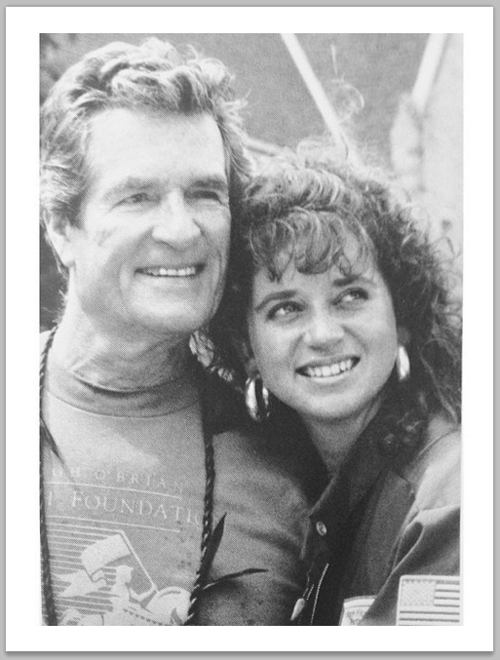 I’ve got an adventure today: I’m headed to Minneapolis this afternoon! Remember the Mrs. Meyers Clean Day #GetMessyContest I wrote about? Well. The winner was chosen! I’m headed to her house, near the Twin Cities, to host a big craft party tomorrow night. I can’t wait. It’s going to be awesome! And no doubt I’ll be instagramming up a storm if you’d like to follow along.

I’m feeling quite nostalgic because I haven’t been to Minneapolis since the summer I turned 16 years old. That’s teenage me above — with big earrings and even bigger hair — pictured with actor, Hugh O’Brian. The photo was taken on that Minnesota trip of long ago.

Sixteen-year-old me was there for a HOBY Leadership Conference (HOBY stands for Hugh O‘Brian Youth Foundation). I’m not sure if it still works the same way, but at the time, each state hosted a leadership conference for 15 year olds — I think it’s typically one kid per high school in attendance. Then two delegates from each of those state conferences go to a Worldwide Conference where those state delegates, plus kids from all over the world, spend a week together taking classes and hearing speakers and getting inspired to make the world a better place.

Oh, I wanted to be one of the delegates so bad! I went through interview after interview about politics and current events and pretended I knew what I was talking about. I would reference Orwell’s Animal Farm — it always seemed to impress the adults. Hah!

And it worked! I got to go!

Minneapolis was the host city for the Worldwide Conference that year, and I was one of the delegates from Utah. They bought my plane ticket and paid all my travel expenses. I couldn’t believe my luck! I don’t remember a ton about the classes, but these are some of the things I do remember:

– That week was one of the first times of my life that I got to interact with a truly diverse group of people — literally from every state and all over the world. My hometown was very, very homogenous (all white — my older brother, a Navajo, was just about the only non-white around), so it was totally new to me and I loved it. People thought differently and there were friendly debates and I couldn’t get enough.

– I remember introducing myself as a Utah delegate and people would get a curious look on their face. I’d pause for just long enough and then say, “Yes, I’m a Mormon, and no, I only have one Mom.” That would always get a big laugh. I ended up using it for many years.

– Though I was a very confident teenager, and generally felt pretty enough, I never quite felt like I met the standard of beauty in my little town. No doubt I can chalk up a lot of this to typical teenage insecurities, but I always felt like my hair was too dark, I had too many freckles, my name and something about my eyes made people feel like I wasn’t quite local. But at the Minnesota HOBY conference, I suddenly felt so attractive!

The boys seemed to like me — and they weren’t bothered that I was smart! In fact, they assumed I was smart or I wouldn’t be there. For whatever reason, this felt like a novel experience. I didn’t feel like I was drawing weird attention to myself if I spoke up, or offered a strong opinion. I loved it so much. I felt like I could be myself and that when I was being myself, I could shine. It was hard to say goodbye to that feeling at the end of the week.

– There was an attendee from Nebraska with a pair of K-Swiss sneakers in white. I had never seen K-Swiss before and thought they were soooo cool. They had such a distinctive look. I was too embarrassed to ask about them, but I hunted and hunted once I got back home so I could figure out what the brand was and where to buy them.

– The delegates all came with pins to trade. Pins shaped like their state or their country, or keychains or other small trinkets — the kids from France brought Eiffel Tower keychains. The kids from Mexico brought little leather guitar keychains. It was like “flair” from the movie, Office Space. I still have a bunch of those pins.

– There was a delegate from Ireland. He was beautiful and spoke really gently and all the girls had a crush on him, me included. He had a ring that he told me he got from U2. I didn’t believe him but I still had a crush on him anyway. On the last day he gave me a video (a VHS tape), and on the video he told me he loved me. (All the girls loved him, but he loved me! This was a first.)

After that week, I never saw him again, but for the rest of the time I lived in my parent’s house, on the rare instances I was the only one home, I would watch that video. I felt very private about it. I don’t think I ever let anyone else see it.

– There were some field trips that week where we’d get bussed around the area. It was summertime and everything was green, green, green. And there were lakes everywhere! I was visiting from the desert of the West and I just ate up the whole scene.

– The conference was held on the St. Thomas University campus, and I bought a St. Thomas sweatshirt as a souvenir. Which seems odd to me now — because the conference had nothing to do with St. Thomas — but seemed like a great idea at the time.

– There was a big sort-of formal party at the end. Everyone dressed up. I’m 99% sure I was wearing a Gunne Sax dress, but one of the girls from Europe — I think she was Dutch — wore black pants and a black suit jacket over a simple lime green bustier. She was so chic and fabulous I just stared and stared and mentally noted every detail. I remember feeling so dang out of my league. Even if I had been able to conceive of that outfit (not possible), I wouldn’t have been able to find anything like that in my community. And I wouldn’t have been brave enough to wear it!

I’ve thought of that outfit so many times since then. To this day, every time I’m prepping an outfit for a big event, I think: “Is it as cool as the black suit/lime bustier?” And it never is.

Those are some random memories, but they’re sweet to me. It was definitely a big growing up week for me. I loved it and felt lucky to be there. My oldest child is the same age I was when I attended that conference in Minnesota. I hope he’s getting to have similarly wonderful experiences.

Have you ever heard of HOBY? Did you have a particularly transformative week/event as a teenager that you remember? Have you ever spent time in Minneapolis/St. Paul? (It’s where Target is headquartered!) I always love to hear your stories.

P.S. — This trip will be short as can be. I leave the party tomorrow night and head straight back to the airport. I’ll basically be in Minnesota for 24 hours, so I won’t get to do much (or probably any) sightseeing. I wish I had more time! The design scene in the Twin Cities is terrific, and I’d love to explore. But, I do get to meet up with Amy Christie tonight! She’s a friend and a long time contributor here on Design Mom, and happens to live near Minneapolis. I’m very much looking forward to seeing her!