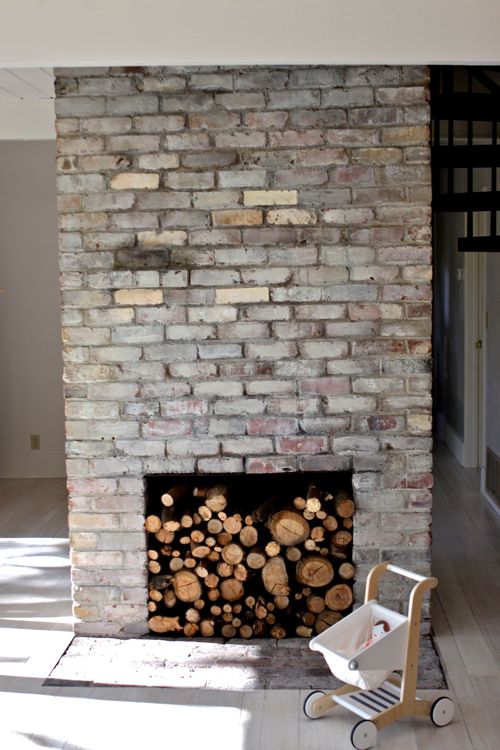 I’ve got another Treehouse report for you today, all about our fireplace whitewashed bricks. Plus, I worked in a little story about the bricks in my childhood home as well (find it when you click through). 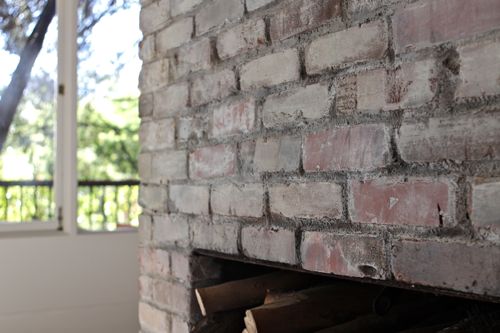 When I started to consider whitewashing the bricks, I looked up as many tutorials as I could find. This one and this one seemed to have the most clear instructions, and both mentioned using leftover white wall paint they had on hand. They both showed examples of more paint coverage than I was looking for, but I figured I could just dilute the paint more and get less coverage.

As I read further, some commenters recommended using lime for your whitewashed bricks, or other natural paint products that would let the brick “breathe”. I didn’t know if I cared whether or not the bricks breathed, and whether or not it was worth looking for alternatives, when I already had spare latex wall paint I could use. But the more I read, the more I thought it was at least worth looking into. 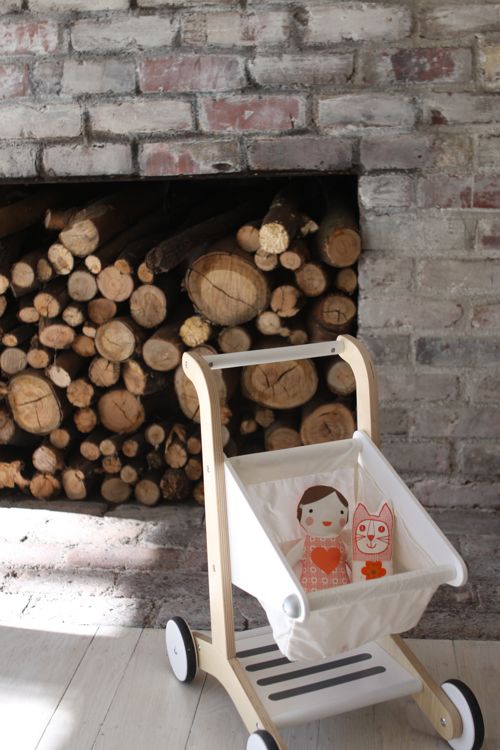 In the meantime, I decided I’d better do what I could to clean the bricks first, because the front of the fireplace was covered in soot. 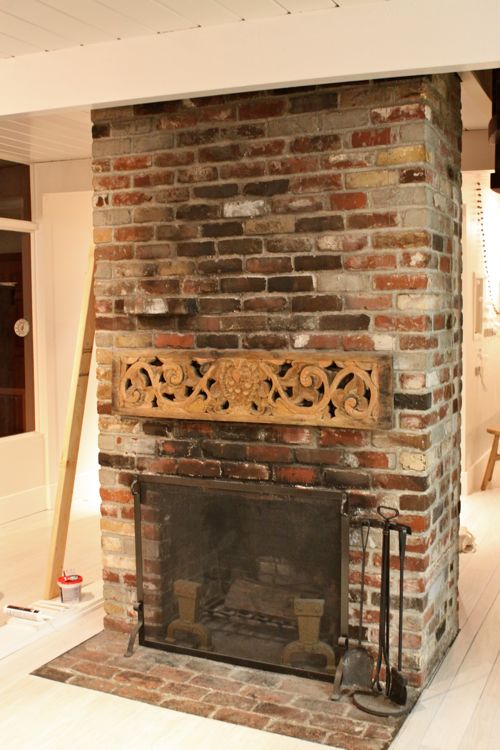 This is the fireplace when we started. Not bad looking, but coated in soot.

(By the way, all but the “finished” photos were shot fairly late at night, which is when the work was happening, and why the images have a yellow tint.) 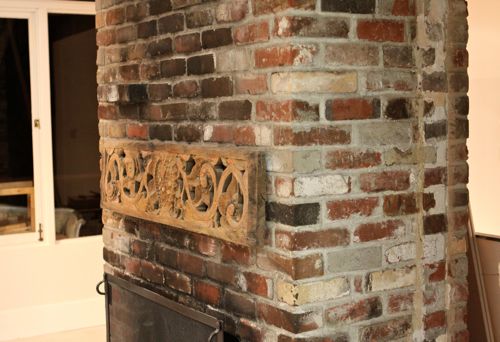 I really like the carved wood piece — it’s one we inherited when we bought the house. It was hanging from wires. We took it down while we cleaned and whitewashed, and I can’t decide where I want to hang it next. But that’s for another post. : ) 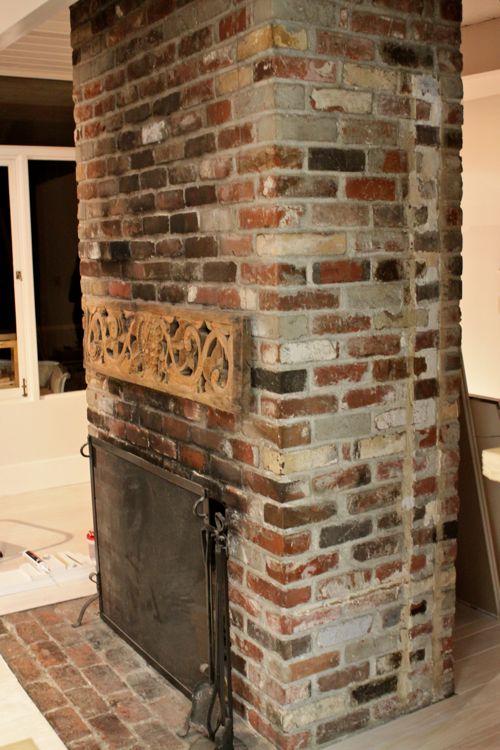 Here are a few more shots so you can see the bricks from every side. You may notice there’s one brick that juts out, forming a small shelf. I put a roll of blue tape on it, so you can see it better: 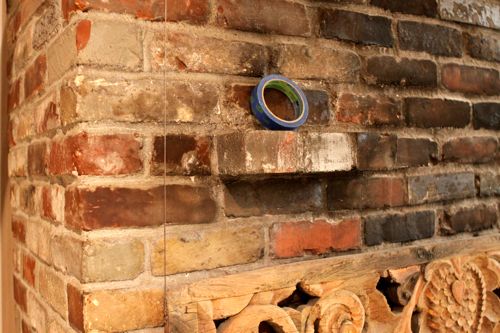 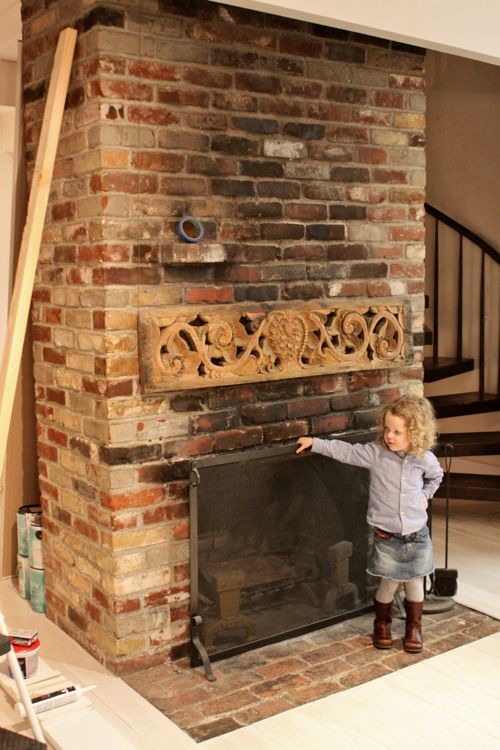 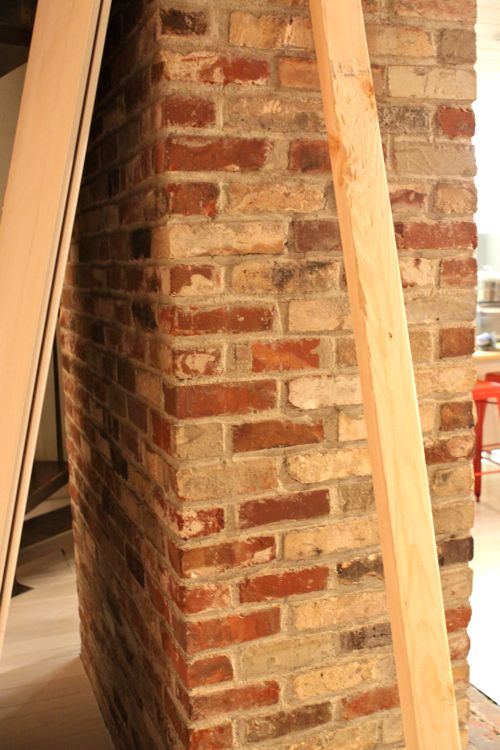 On the sides and the back, where the brick isn’t covered in soot, I think the brick is actually very pretty. It reminds me so much of the brick my parents used in my childhood home. 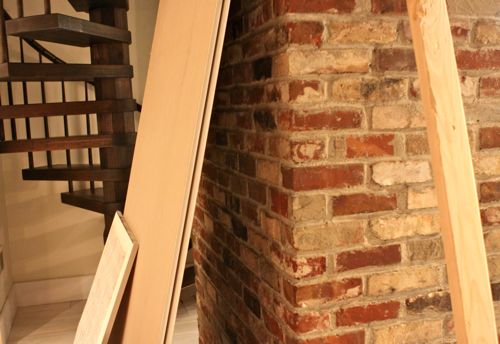 A side story about that childhood brick: We moved from California to St. George, Utah when I was 5, and for about a year, we rented a home while we built another home. During the time period when we were building, the City of St. George decided to tear down the old library building that was constructed by the early residents of the town, Mormon pioneers. And the building was made of beautiful sandstone brick.

Well, the town offered to let residents take that original sandstone brick. You would come to the demolition site, climb the scaffolding, and use tools to chip off each brick one by one. You could take home any bricks that you chipped away.

Chipping those bricks is one of my earliest St. George memories!

And I laugh when I think about it now, because it’s the sort of thing I can’t imagine would be allowed these days — too much potential for lawsuits.

Anyway, my family used those bricks on the bottom section of our house (you can see it in this image), and those bricks were used inside on our living room fireplace as well. They were beautiful, and I loved knowing they had some history.

All that to say, I actually like these bricks! And did consider just cleaning them up and leaving them as is. But ultimately decided they could still stand to be lightened up a bit. 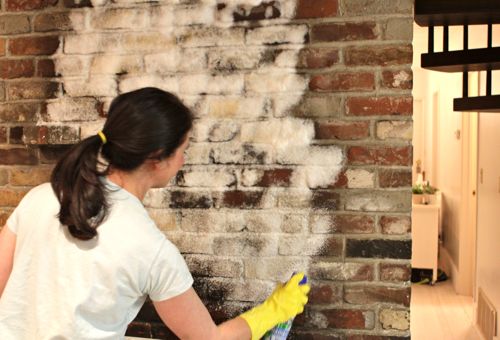 First step, was removing the carved wood piece, moving all the fireplace accessories, and cleaning the brick. I looked up instructions online and discovered that foaming bathroom cleaner (like Scrubbing Bubbles) was universally recommended.

I’d spray it on, then let it sit for a minute or so until it was turning yellow/brown from absorbing the soot. Then I used a scrub brush and a bowl of water and scrubbed the brick clean.

I put old towels at the bottom to absorb the water that spilled down the front as I scrubbed. and I ended up coating the bricks 2 or 3 times as needed, and using the whole bottle of cleaner! 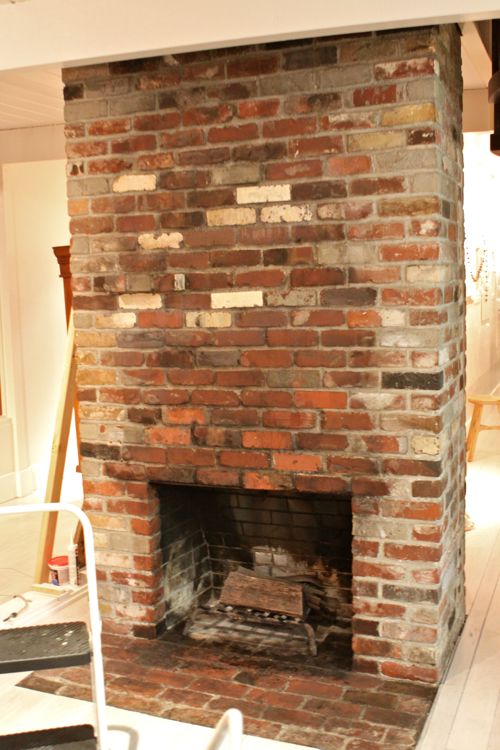 When I was done, Ben and I went to a late movie so the bricks could dry. We shot this photo when we got home. The bricks were about 75% dry by then. Looks much better, right?

But notice the center section of bricks is mostly red, and side sections have a white, chalky texture. The soot and cleaning apparently removed the chalky texture. Some of it did come back as the brick fully dried, but there was still a big difference. By white washing the brick, my hope was to bring that chalky texture back and amp it up. 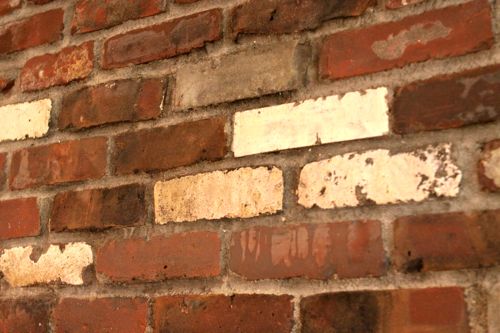 As I scrubbed, I also discovered there were a few bricks that had been painted white. An experiment from decades ago? Who knows?

But having that handful of painted bricks really showed me the difference between a brick that can “breathe” and a brick that can’t. The bricks that hadn’t been painted responded to the cleaning and the new paint on an individual basis — some absorbed more than others depending on their composition. But I noticed while I worked that it was easy to see why the word “breathe” is used. The bricks that had been painted didn’t react at all, and felt “dead”.

It was very interesting to experience the differences.

At that point I was fully convinced I wanted to try a paint product that would let the bricks continue to “breathe”. So I started my internet research and found something called milk paint which looked very promising. And when I posted about whitewashing the bricks on Instagram, I received some emails/comments from readers who had used milk paint, so that was extra encouragement. (By the way, the comments on that Instagram are fun to read. Lots of strong opinions on whitewash!). 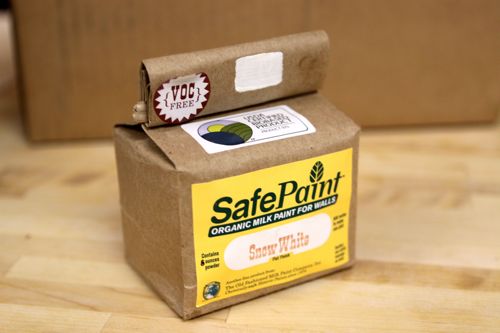 So I picked up some milk paint that I found at an eco paint store in Berkeley. (It’s sold all over the country, you can find store listings on their site). It was about $15 for this little bag of powder (and I didn’t even use half a bag for this job).

Two nights later, when I knew the brick was fully dry, I started the white washing. It was basically an experiment. I would pour some powder in a little bowl that had a lid (the kind you use for leftovers) — like maybe 1 to 2 tablespoons of powder at a time. Then I would add water and stir it until it was like milk. 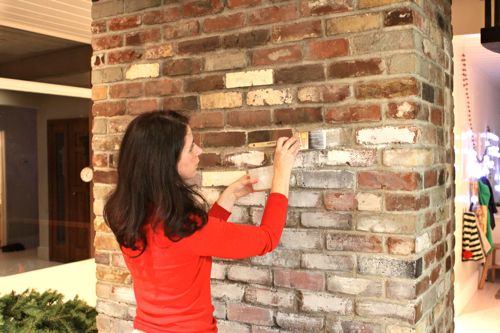 Then, I would paint it on brick by brick… 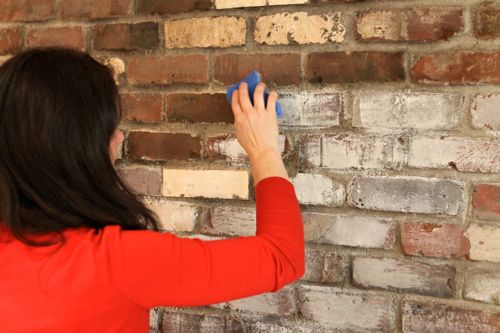 …and immediately wipe some off with a wet sponge until I achieved the coverage I was after.

Here’s the first section of whitewashed bricks I did: 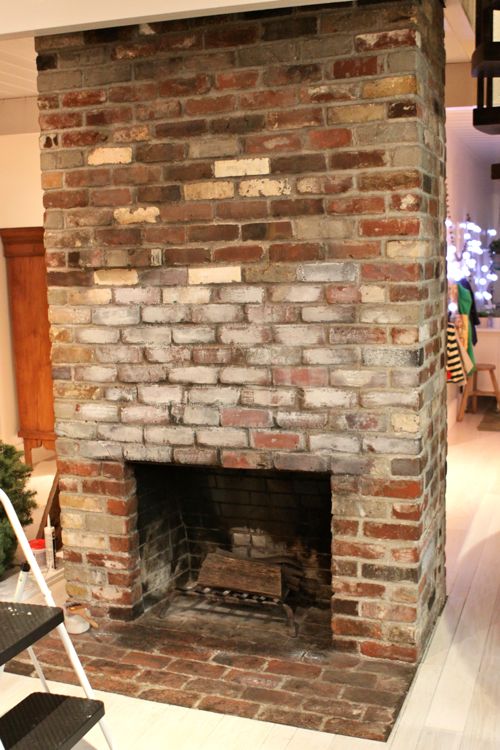 About an hour after taking the photo, I decided the coverage was too thick, and used the sponge to wipe off even more. And the next batch of paint I mixed up, I made even thinner.

If you are using milk paint, I would recommend starting with very thin paint and going from there. You can always add another layer! 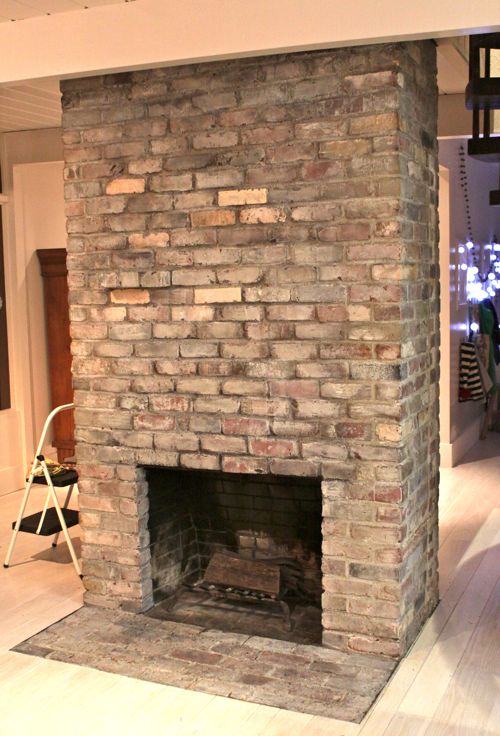 Here’s the finished brick shot that same night, a few days before Christmas. 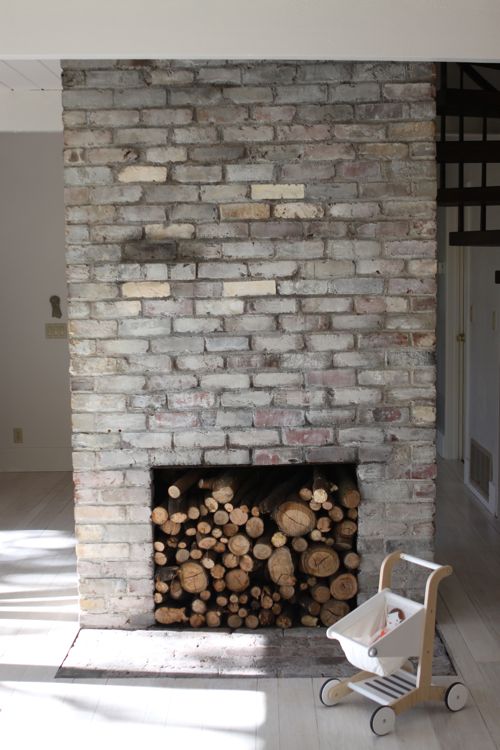 And here are the finished whitewashed bricks, shot yesterday. That one dark brick? It’s actually not dark, it’s just the shadow from the little shelf. 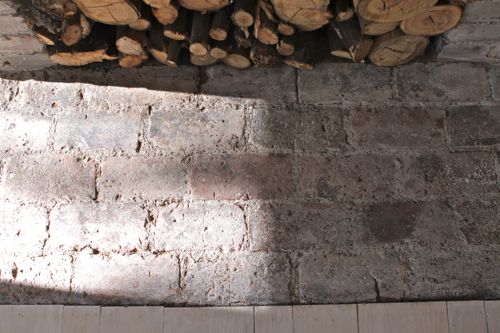 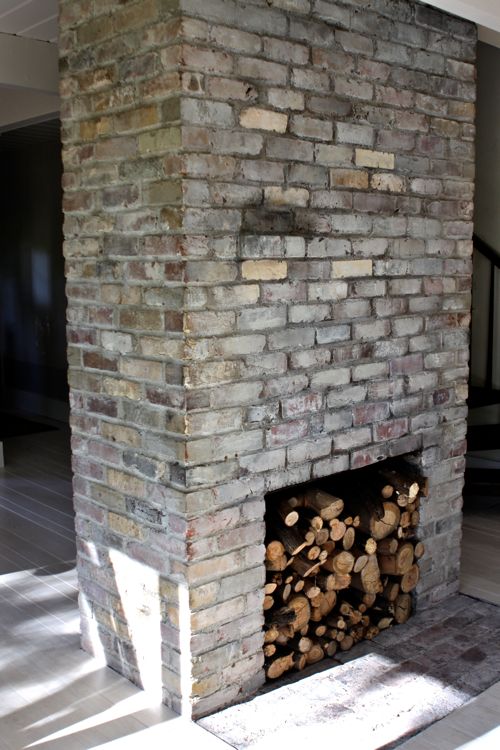 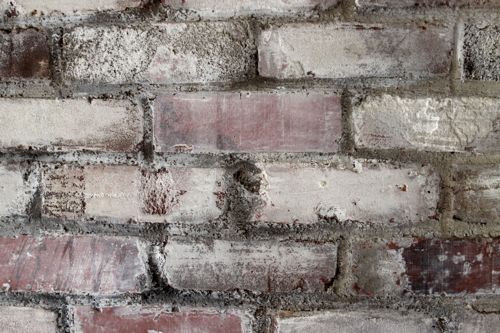 Fun Fact: I still haven’t finished the job! I did 3 sides in time for the holidays, but I still haven’t done the back section. Conveniently, that means I can share this photo that shows the back and the side at the same time so you can see the difference really clearly: 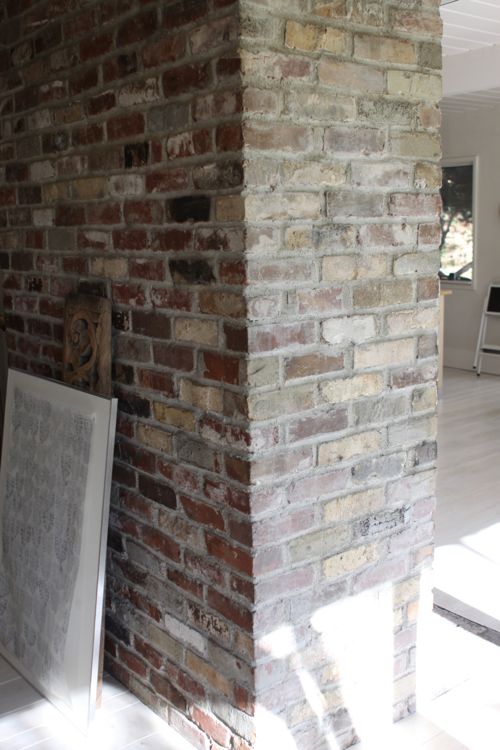 I really like the end result. The whitewashed bricks are certainly lighter, but you still see lots of texture and color coming through.

One interesting thing about using milk paint: it doesn’t seem to adhere to the bricks in a fiercely permanent way. Meaning, if I wanted to scrub it off, I don’t think I could get to back to the original brick, but I could get fairly close. And if I need to clean it in the future, I can already guess I’ll need to follow up the cleaning with another light coat of milk paint.

Also, some reviews I read said the milk paint would have a slight dairy odor until it dried, but I found it to be odorless. 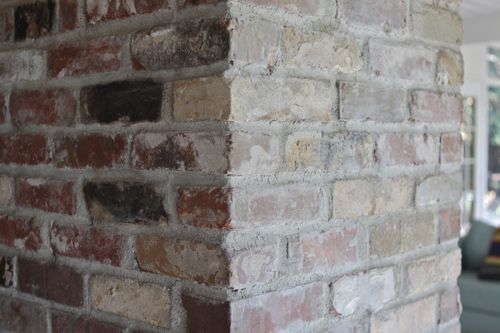 I’d love to hear your thoughts. Do you like how these whitewashed bricks turned out? Or maybe you prefer the original brick (it won’t hurt my feelings, I promise.)? And have you ever tried something like lime or milk paint? This was my first experience with it.

P.S. — Here’s the before and after right next to each other for easy reference: