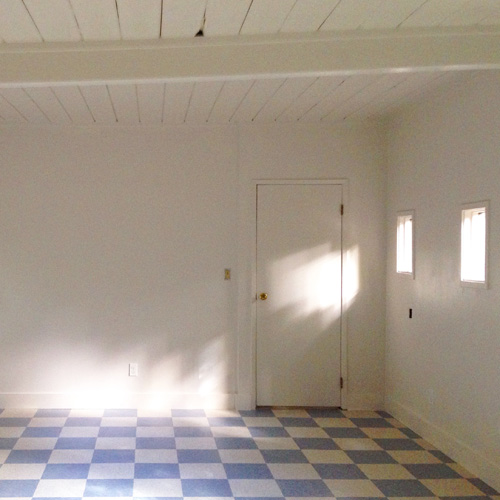 Here’s a little update on the Girls Room Remodel. I’m excited to tell you about the progress we’ve made! We’re essentially at blank canvas status, which feels fantastic. This is what we’ve marked off the list: updated electric work throughout — including a new full electric panel/breaker box. It’s one of those tasks that requires a hefty chunk of budget, but isn’t fun to show off. : )

We solved the ceiling issue I mentioned here. And we solved the beam and post issue as well. More on those below. The drywall was patched and repaired. New baseboard and ceiling trim was installed. And there’s a fresh coat of paint on the walls and ceiling (Origami White by Sherwin-Williams). Even spray-painted the floor vents white. Like I said: Clean Slate! 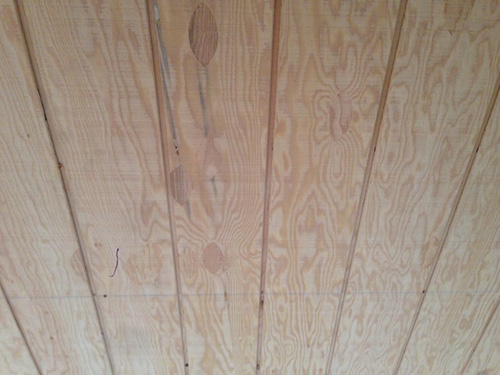 First the ceiling. You may remember, that the ceiling is in three sections, divided by beams, and that the sections were covered in acoustic tile. We removed the tile and found good-looking wood planks under two sections, but we found sheetrock over plywood in the third section. 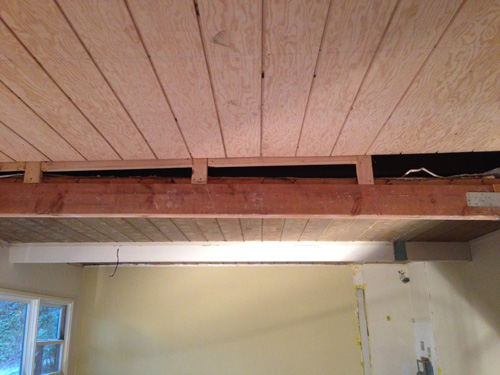 We didn’t have the budget to replace the sheetrock ceiling with wood planks that matched the other two sections, so we decided to fake it. We used 4′ x 8′ sheets of wood paneling (you can see them leaned against the wall here). We picked the up at Lowe’s. The wood paneling was attached to the ceiling studs (or are those called joists?), and once they were installed, they looked quite similar to the other wood planks on the ceiling. Now that they’re painted, they look like a total match! 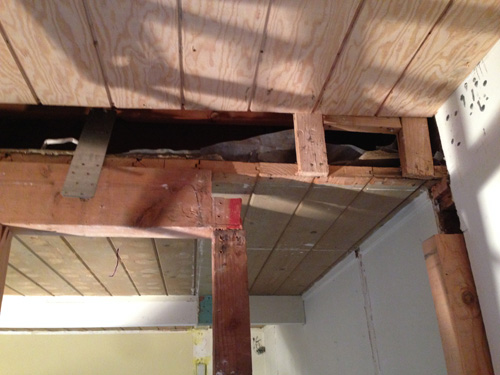 Remember the random beam in the middle of the room? Happily, it wasn’t load bearing, but we still needed to get it out of the way. We installed a new post against the wall. 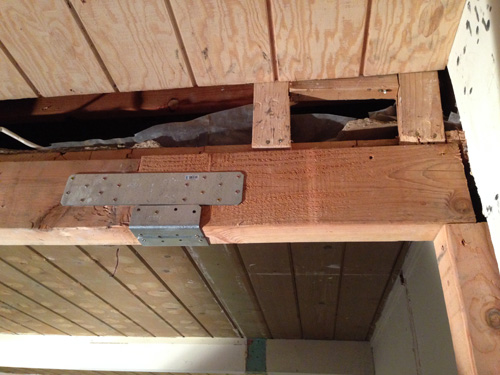 Then we replaced the section of missing beam and secured everything with metal plates. 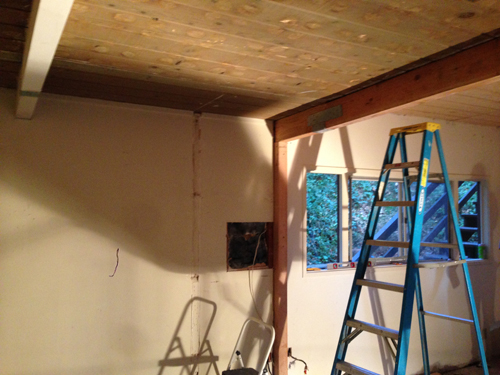 Here, you can see the repaired beam from the other side. No more random post!

I already showed this photo, but I’m showing it again to discuss that gap between the beam and the ceiling. The ceiling on most of our main floor has a gradual slope to it — including two sections of the ceiling in the girls’ room. From what we understand, this house was originally one floor, and the current first floor ceiling was the roof! Anyway it means there’s a gap on one side of the beam. 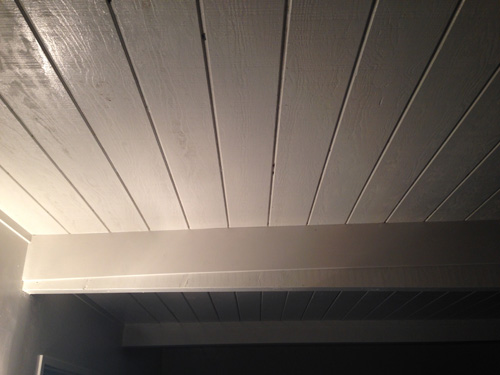 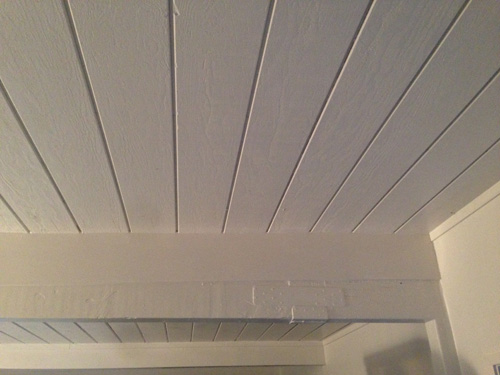 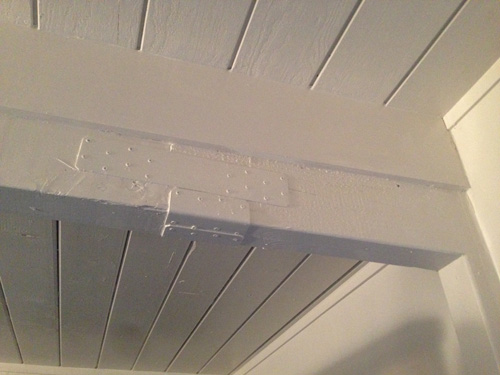 The whole thing — beam, board, metal panels, post — is painted up now and it looks great! The exposed work gives a hint of industrial feeling, which is appealing to me. 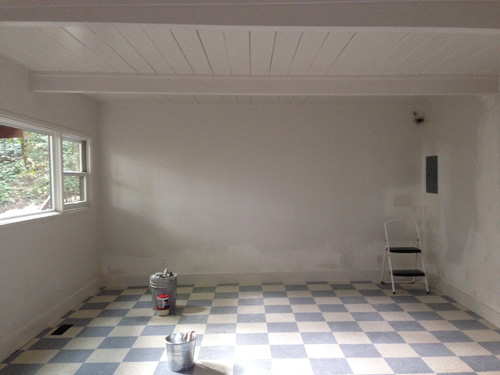 For floors, we used the same VCT tiles we put in the boys’ room, which is next door to the girls’ room. Besides those two bedrooms, the rest of the main floor is the white-washed wood. Someday, we’d love to add whitewashed wood to the bedrooms — and throughout the upstairs too! But we’ll need to save up first. In the meantime, I adore VCT floors (ours are by Armstrong, ordered from Lowe’s) so they don’t feel like a compromise to me. They’re easy to install and clean. They’re soft underfoot. And area rugs layered on top look great. Best of all, they’re affordable. Which means if we decide to replace them with wood down the line, or cover them with wall to wall carpet, we won’t feel like we’ve lost a major investment.

To help with all this work, we hired our friend Alex who I’ve mentioned before. He’s a sculptor that does smallish construction jobs when he’s between art pieces. He’s also the guy that put together our crate shelves in the reading loft. He did such a great job on the girls’ room! 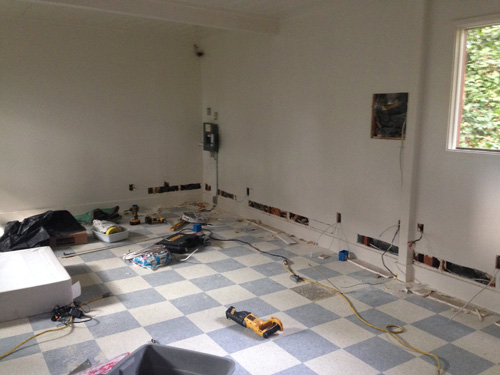 As I mentioned in the last post, we also had to tackle the very old electrical box that was hidden in the closet we removed. I am happy to tell you, a professional electrician tackled the job. 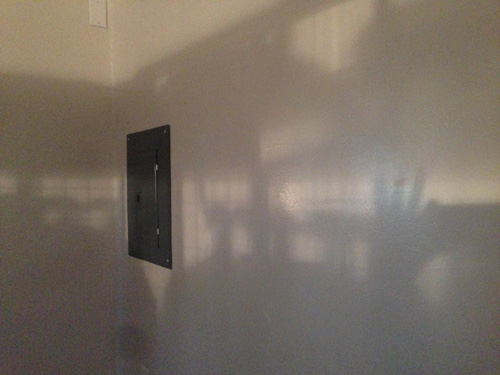 New wiring in the whole room, plus a whole new electric panel/breaker box that serves the main floor of the house and is inset flat against the wall. No more electricity going out if the dryer and dishwasher are running at the same time. Hooray!

Now comes the fun part: figuring out where to place furniture, pondering color options and fabrics, deciding on artwork, accommodating storage needs… Happily, I love this sort of thing. And I have to say, the new layout is coming together!

We have the basic pieces in place, and the room is now functional, so the girls’ have been able to move back in. I had mentally planned on two weeks of them being out of the room, but in actuality, it turned into three weeks. So I was overjoyed to get them back in the space. Three weeks is a long time to a kid! The sweetest part is that Betty & June were sharing Oscar’s room during the remodel, and the night they moved back in to their room, he missed them so much he slept in Olive’s bed!

I’m hoping to have the room finished (in this case, I think “finished” means good enough to share a photo tour) by the time Olive gets back from France. A fun surprise to return to! But I’m trying to pace myself. Life gets busy between now and Christmas, so who knows if I’ll get it done in time, but it’s fun to think about it!

How do you handle big projects in November and December? Do you find that the holidays function as a motivational deadline for you? Or do you prefer to pause on any new projects until January? I think I go back and forth. Also, can you believe how much improvement a coat of paint makes?

P.S. — Once again, I’m using crummy low-light photos, but you were so nice about it last time that I’m hoping you don’t mind.