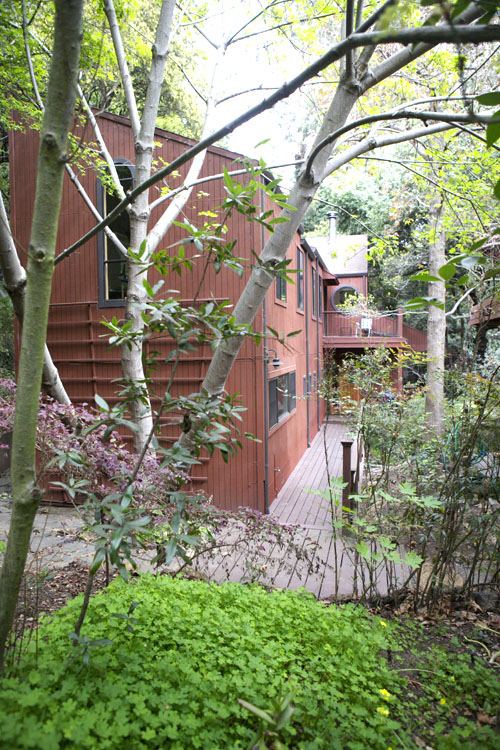 This is the story of how The Treehouse, our home in Oakland, came to be ours.

This is the long version of the story. I’m still figuring out how to tell it in a short version.

Starting last summer, when we embarked on our final year in France, we started looking online at real estate in Colorado. We had loved living in Colorado and our plans never strayed from moving back. We just needed to find a house. We wanted to buy something and settle down. In fact, that was our original plan when we first moved to Colorado, but at the time, we weren’t able to find a house, and then we got distracted by France. : ) 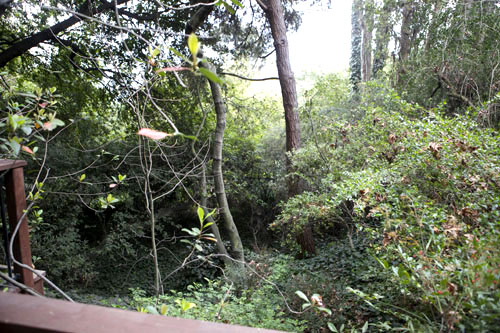 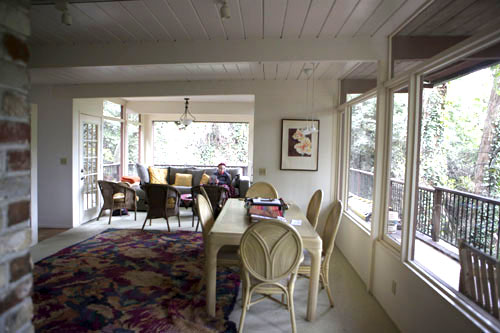 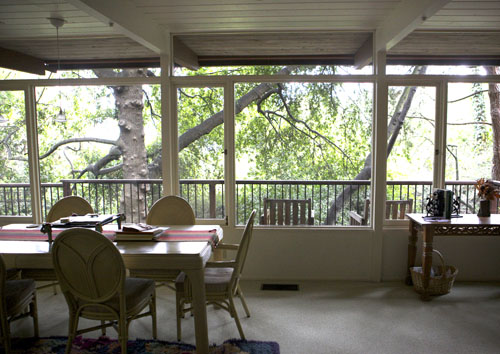 We really wanted to buy a house before we moved back, because I was overwhelmed by the idea of moving twice — first into a rental, and then into a purchased house, possibly in two different school districts. Ugh. Purchasing a house and moving directly in sounded ever so much more appealing. 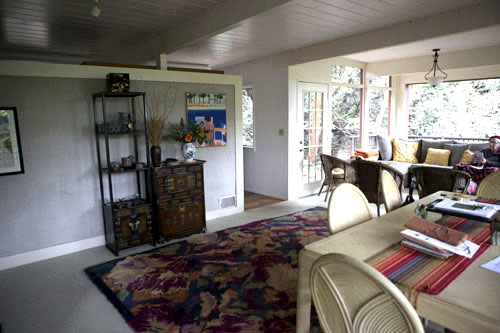 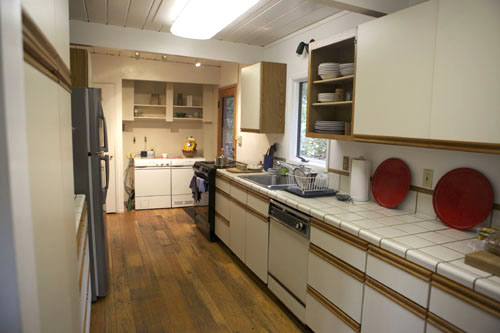 So we searched. In every Denver neighborhood. In the suburbs. In the mountains. We did specific searches. We did broad searches. Occasionally we would find something we were interested in — and I would sometimes share our finds on Facebook. But nothing was quite right. Or a house might get grabbed up before we had a chance to really consider it.

There’s no question we were being really picky. We were looking for an extraordinary house. Living in La Cressonnière had changed us. It was such an amazing home. I remember returning from our trip to Venice, driving up to the farmhouse and acknowledging it was every bit as lovely as anything we had seen on vacation.

We both work at home, and shoot photos at home, and film at home, and spend so much time at home. Home matters. We were determined to find an extraordinary house that we could really fall in love with. That was a joy to drive up to. That was a treat to live in. It didn’t need to be in perfect condition, but it needed really good bones. And it turns out, that sort of house is hard to find. 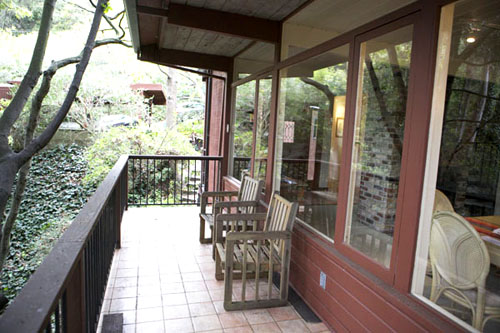 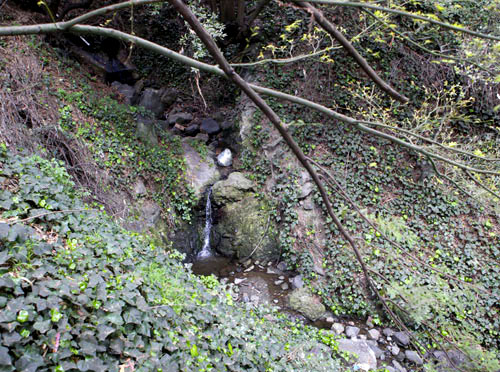 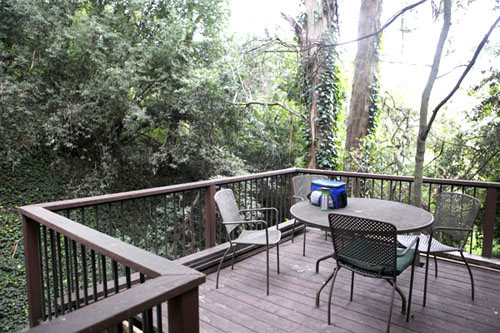 By January, we were a little nervous. Would we be able to find a house? Did we need to extend our time in France? Should we build? What are our other options? I was chatting about our house hunt with my sister, Jordan, and she mentioned we should look at the Bay Area. I shrugged off her suggestion and told her we were priced out of the housing market in San Francisco (and every big city — New York and L.A., too!) But she tried to convince me. She reminded me that we don’t have a commute, and that if we looked further out of the city, there were some great deals. So I did a real estate search by map that covered the entire area, and looked for houses big enough to hold our family and in our price range. But alas, it was just what I thought. We were out-priced.

There was this one house. It was big and yellow. It had 5 bedrooms. It was on 2 acres and backed up to a park! It was 100 years old and needed vast renovations (which is my kind of project). It was in El Cerrito — a little north of Berkeley and Oakland. There was certainly nothing else out there like it — every house around it was on a tiny plot of land. And it was in our price range. A miracle!! 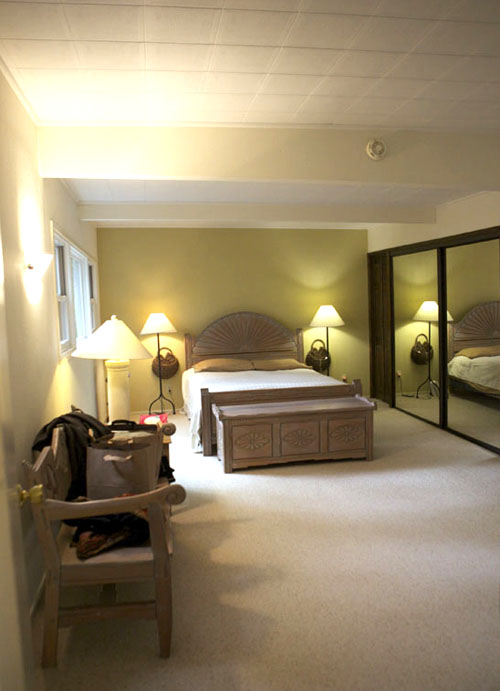 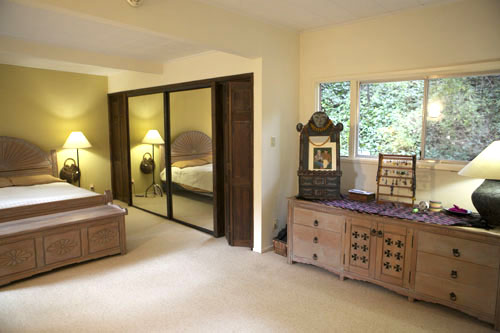 We asked Jordan to go check it out in person. She took tons of photos, even made a little video, and emailed everything to us. She told us that it needed a lot of work, but it was a really neat house. And we felt like the 2 acres made it a no brainer.

We knew it was a long shot, but we felt compelled to go for it. It was an extraordinary house. And even though we hadn’t seriously considered the area, there were strong draws for us to San Francisco. My father grew up in the Bay Area and I had been raised with visits to my grandparents in Menlo Park and San Carlos, so I had some roots there. Plus, I have a sister and brother in the area. Plus, our fields of work are centered there, and Ben of Pinterest’s advice to move where your field of work is headquartered had stayed with me since I’d heard him speak those words at Alt Summit 2012.

So Jordan recommended a local real estate agent (which we needed in order to make a bid on the house), and he recommended a mortgage agent, and she helped us get pre-qualified, and we bid on the house. The conversation with Jordan, to the search, to the bidding on the house, took place over about 5 days. It was fast. And a little nuts. 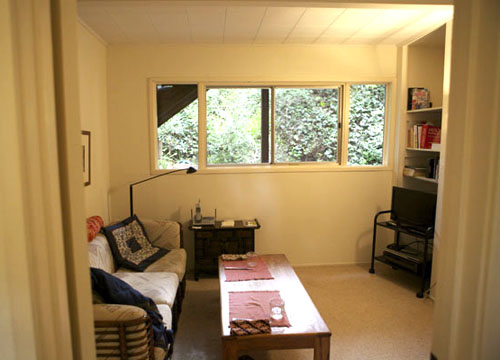 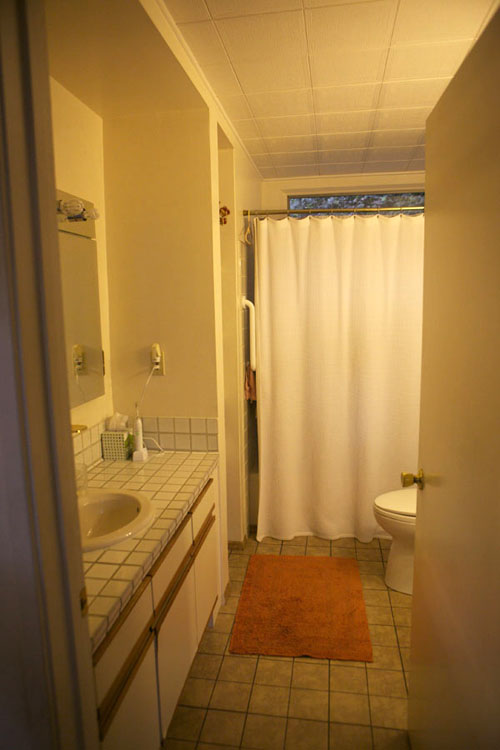 Sadly, the next week, we found out that not only was our offer not accepted, there were also over 20 other bids, and the top bid was 200,000+ beyond the asking price. Yikes!

Our conclusion: clearly, that house was an exception, it had been priced too low, and our first impression — that we were priced out of the area — was indeed true. But we didn’t feel too bad. It had been good to go through the work of getting pre-qualified. It had been over a decade since we’d owned a house and it was good to remember what the buying process is like. So we abandoned our search in the Bay Area as quickly as we had picked it up, and we returned our focus to Colorado. 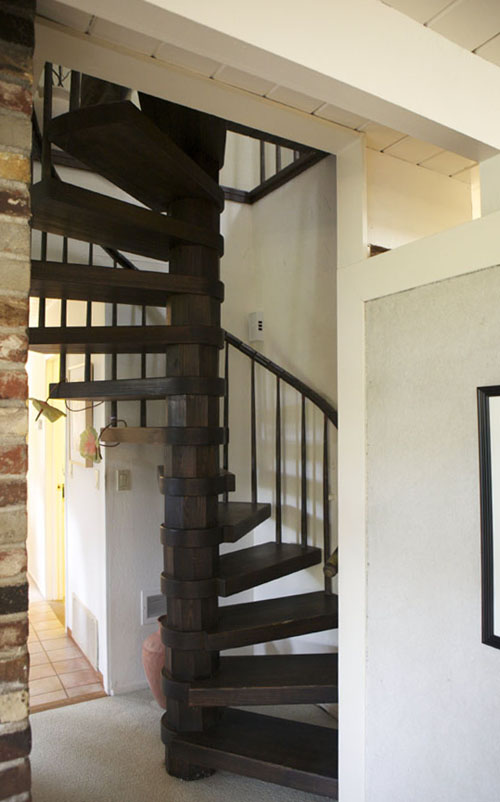 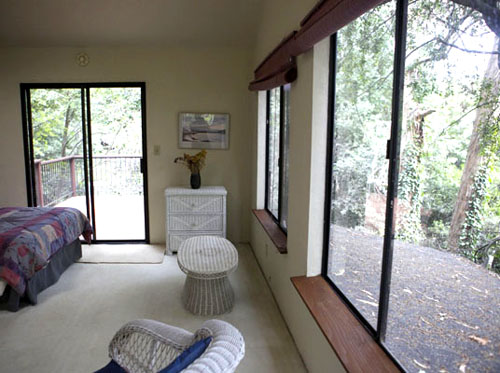 And we were feeling more exploratory at that point, so we broadened our search. We kept searching Colorado, but we worked with a real estate agent in Santa Barbara, too. That’s where Ben Blair’s father grew up, so we felt roots there as well.

But, now we were on the radar of the real estate agent in Oakland, and once in awhile he would send a listing he thought we’d like. I eventually wrote him an email and told him we simply weren’t interested. We had only bid on the yellow house because it was extraordinary. And the very few options in our price range in the Bay Area just weren’t appealing to us. The good stuff was too expensive. He totally got it.

But a few weeks later, he emailed again. He had a house he thought we would really like. It was being privately sold (instead of publicly listed) because the couple who owned it were older and they didn’t want the hassle of open houses and bidding wars. Since there was no listing, he had no link or photos to show us, but thought we would really like the house. We were grateful he thought of us, but without photos to look at, we didn’t give it much thought. And I didn’t want to bother my siblings to go take photos — I didn’t want to waste anyone’s time. 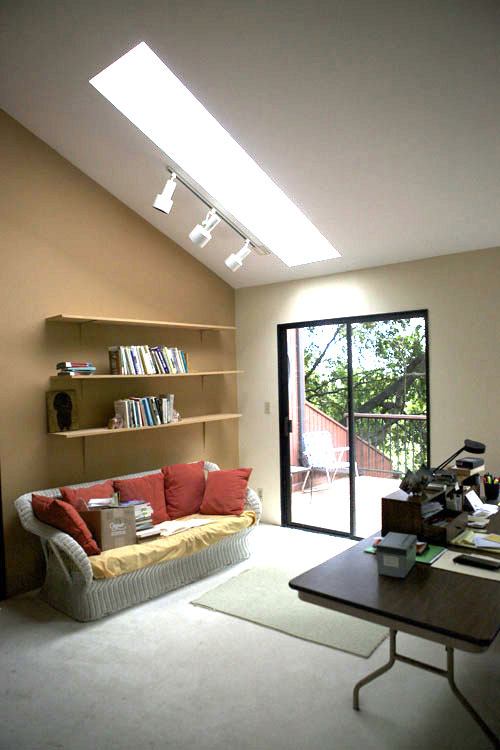 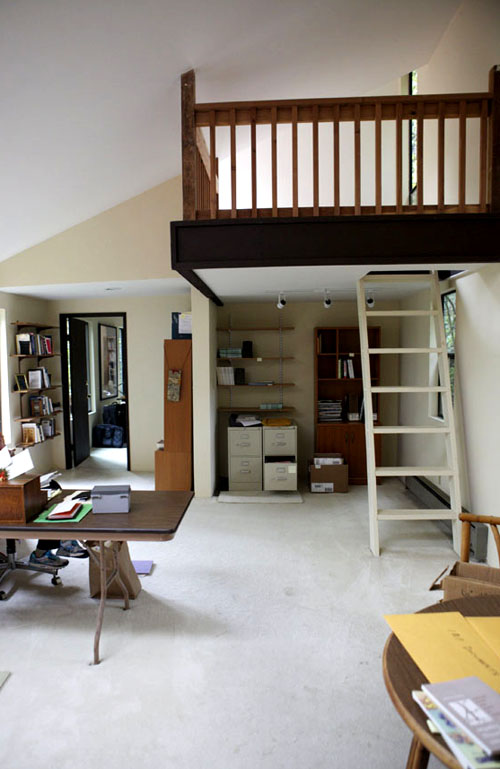 Several weeks later, he emailed about the same house again, encouraging us to send someone to look at it and take photos. It was now March, and we were feeling so unsettled we decided to give it a try. So we asked Jordan again, and she took photos and made a little video again. And as she was driving away, she called us in France and said, “I don’t what the price is, but if you can afford it, you should buy this house.”

The photos she sent us are the photos in this post! These shots feature the furniture and belongings of the previous owners. (Jordan actually sent about 100 photos, so this is 20% of what we saw.)

When we saw the images, we fell in love with the house immediately. It’s a mid-century house with unusual architecture. And it’s completely surrounded by forest. It’s in a residential neighborhood, but there are so many trees, we can’t see our neighbors — it feels totally private! The house is built into the side of a hill and even on the main floor, it feels elevated, like you are high above the forest floor. The main floor is surrounded by decks and patios, and the 2nd floor has two decks as well. And because the weather here is wonderful year round, it’s really designed for indoor/outdoor living. There’s even a tiny stream in the back yard. Everyone that has visited us so far has commented that being here is like being in a treehouse. 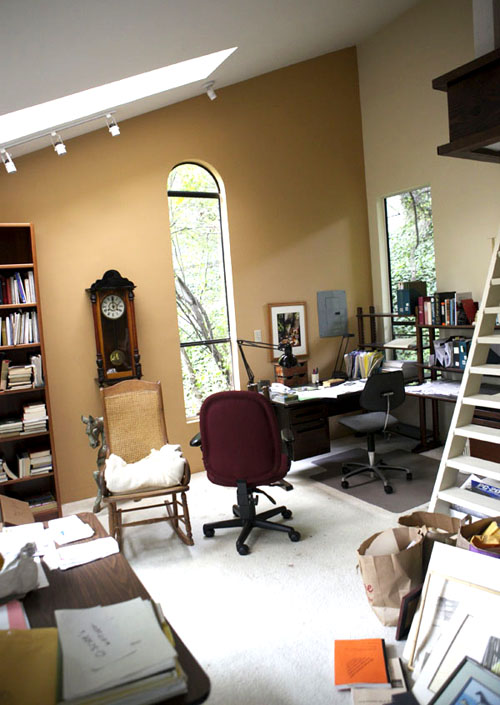 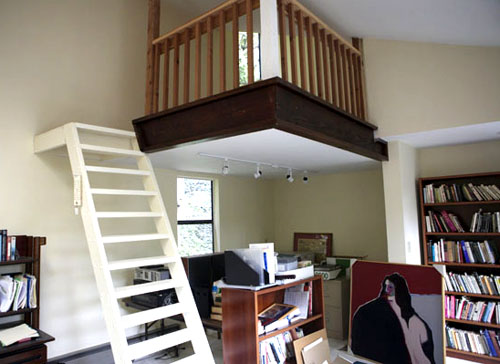 So mid-March, we bid on the house, and our real estate agent suggested we write a letter to the homeowners as well. Turns out the letter did the trick. There was another (apparently better) bid, but they accepted our offer! We couldn’t believe it!! We kept asking each other: Is this for real? Are we really moving to Oakland? To California?? After all this time, are we going to be homeowners again?

Through April and May we applied for our mortgage. That process, made more difficult by being overseas, just about did us in. I swear, it was like a 40 hour per week job. Nuts. But the sellers were incredibly patient. And so was our accountant. And so was our mortgage agent. And eventually, it happened! The official closing occurred mid-June.

And on July 15th, we flew from Paris to San Francisco, rented a van, drove to Oakland, and saw this house — which we had bought — for the very first time. 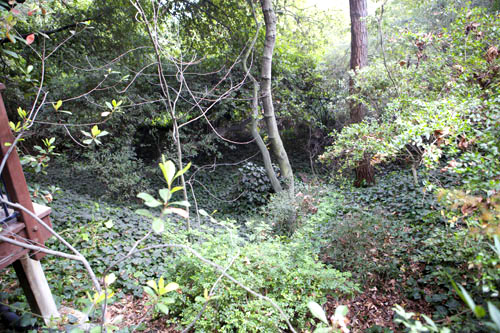 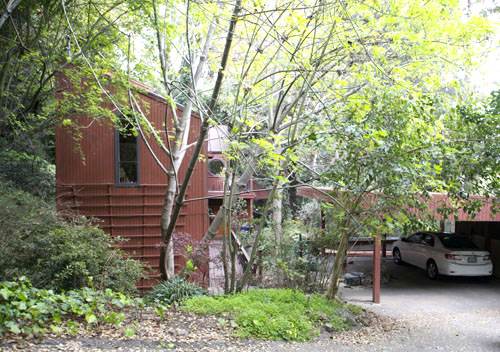 This post is long enough as it is. So I’ll save details about the number of bedrooms, the renovation work that needs to be done, and the furniture we inherited, for next week. But I have to acknowledge how lucky we feel. If it hadn’t been a private sale, with owners who weren’t intent on getting the highest possible price, we never could have bought it. This house is such a gift, a treasure. We couldn’t feel more gratitude about calling it our own.

Friends, I’d love to hear: have any of you ever bought a house without seeing it in person first? (I’m sure we’re not alone!) Or, do you think we’re crazy?

P.S. — Speaking of crazy, I’m afraid this move has pushed me over the edge. I’m definitely struggling. During the year after we moved to New York, I experienced a full-on breakdown, and happily, it hasn’t reached that level. But my mental state feels more serious than a typical “down” day for me. If things don’t improve over the weekend, I’ll see a doctor to get some help. Thanks for your patience as my publishing schedule has been so erratic this month. And for those of you waiting on emails from me, my sincere apologies. We’ll get things sorted out eventually!