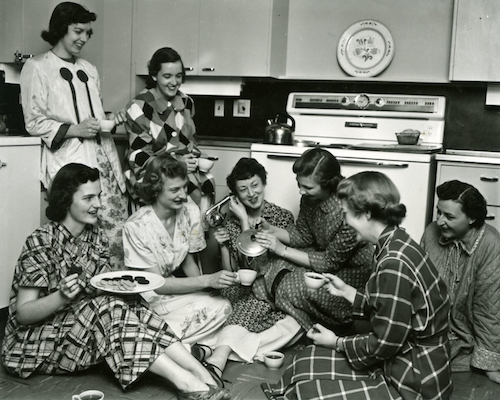 By Raleigh-Elizabeth. Image via Iowa State, where cooking is no longer required ed.

How did you feed yourself when you went off to college? Did you live on macaroni and cheese? Microwave popcorn? Takeout chinese?

A decade later, and I still don’t regret my freshman fifteen. Sure, this is because I put on my weight in steamed pork buns that melted in your mouth and delicious sandwiches from Milano Market, but if we’re all being realistic, there are much better ways to give eating the old college try. A man should not live off Cup Noodle alone. And thanks to a few helpful gadgets, that’s never been easier.

For starters, every dorm basically requires a rice cooker. It should be on the “you absolutely need to pack this” list right next to an alarm clock, some notebooks, and a calendar with Grandma’s birthday and phone number written on it. For the foodie and the non-eater alike, the rice cooker is the most underrated and versatile kitchen appliance. And it doesn’t even require a kitchen! Pair it with the Ultimate Rice Cooker Cookbook and you’ve got yourself a recipe for success.

But no dorm room is appropriately kitted out until it also has an electric grill, a french press, an electric kettle, and — seriously — a crock pot.

Bill and I spent hours arguing the merits of the electric grill and electric griddle, and after years of dorms (interminable years of graduate school for me) and barracks (interminable years of training for him), we are going to call it for the electric grill. I had a hot sandwich press in college that made amazing Hot Pocket-like meals out of everything you put in it (my favorite was always brie, honey mustard, turkey, and sliced green apple on wheat, which turned into this oozy baked brie deliciousness), but it didn’t cook chicken and I couldn’t use it to sear eggplant. These turn out to be wonderful components of a dorm room meal, and if what little space you have is going to be taken up by an appliance, that appliance should make those things easy.

We have — and love — a George Forman that we still break out on occasion, even though we’ve put our temporary housing days behind us. It’s a great thing to keep on hand in a move, too, because long before you’ve found your pots and pans, it’s an easy way to get dinner going, and we all OD on takeout at some point. (Unless takeout consists of steamed pork buns. Then no, I’m sure that’s impossible.) There are countless things you can do with one of these handy little machines without ever stepping out of your dorm room: salmon with a nice pineapple salsa? What about cinnamon french toast? Armed with a little Forman, you don’t need to go broke at brunch, dinner, or any meal in between. You can serve up deliciousness right where you are.

And that’s even easier when you’re also in possession of a french press, which is great for the obvious things (coffee), but is also completely brilliant when it comes to tea and hot chocolate. This cocoa nib hot chocolate is insanely good, and while we’re all far, far away from those cold December nights, there’s no chilly, rainy afternoon a little cocoa won’t warm. Part and parcel for making that french press work is owning a little electric tea kettle, which is a brilliant investment anyway because one day you might find yourself in a cubicle that’s freezing cold and the only way you can make it through your work day is with hot water an arm’s length away. I’m not speaking from experience or anything. I’m not known for appearing at work for the first day armed with a smile and a tea kettle. No, no, not I. (No… I’m known for being armed with said tea kettle, a smile, AND COOKIES.)

But, shocking everyone, I’m a big believer that no college or temporary kitchen is done there. Despite my Do I Really Need A Crock Pot? post, I really do believe there are a few times in one’s culinary life when a crock pot is vitally necessary, and college is one of them. How else can you plan to make a fantastic chili to eat while you and your friends all watch your alma mater torpedo the rival team? Whatever would become of your stew-craving, pizza-overloaded homesick stomach? Bonus: it’s great for making big batches of oatmeal, too. From coq au vin to chowder, there’s a lot a crock pot can do to keep you fat and happy. Plus, there are always a billion slow cooker recipes on Pinterest worth trying that might make you the best chef on campus.

Armed with a crock pot, a tea kettle, a french press, an electric grill, and a rice cooker, any college foodie is bound to be that, anyway. Or graduate school foodie. Or anyone else tight on space. If only I’d figured all this out before I bought eighty gadgets for my New York City postage-stamp sized kitchen.

Bill wants me to note that many dorms ban the use of electric cooking items, but I will have you know that I was That Person who marched down to the Public Safety office armed with the list of what was banned (where my sandwich press was not specifically cited) to preemptively show the automatic-off safety features and also pointed out that I’d never be dumb enough to leave any of these items plugged in. I also usually brought cookies with me. (You’ll note the running theme of “and I brought cookies” in my life.) But, as I explained to them, with the countless hours I spent huddled outside with my dormmates after people set off fire alarms with microwave popcorn, I had no intention of adding to the traffic with a crock pot disaster. But I’ll tell you, when we came back in from those fire alarm drills in the middle of a rainstorm in the freezing cold? We always had something delicious to eat.

Tell me: How did you feed yourself in college? What was the one thing you couldn’t live without?