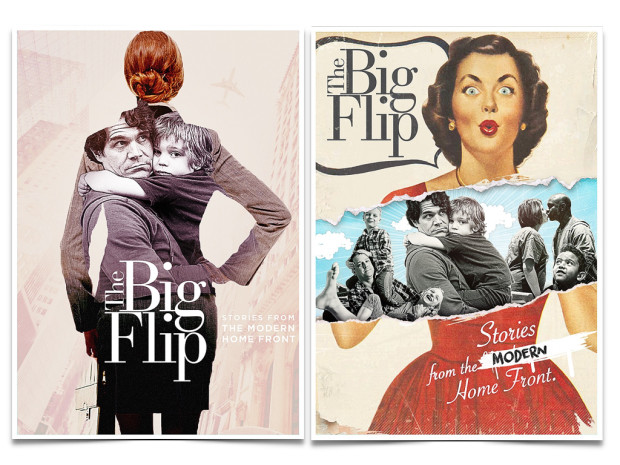 Yesterday, Theresa, a Design Mom reader, sent me a link about a new documentary being made, called The Big Flip (there’s actually a gofundme campaign for it going on right now). The Big Flip is a film and photo-book about the rise of breadwinner wives, and the unexpected challenges it creates in families. Here are some of the stats they cite:

– Mothers are primary breadwinners in 40% of U.S. families.
– The number of stay-at-home dads has doubled since 1989.
– This reversal in traditional gender roles is what the filmmakers are calling The Big Flip.
– Women are expected to not just close the income gap, but reverse it by 2028. In other words, The Big Flip will be the new normal in 13 years.

But it turns out Big Flip families don’t have it easy. Not everyone is happy in their reversed roles, and divorce rates can go up. The documentary wants to explore all of this.

The film looks like it will be beautifully made and I look forward to seeing it. But my initial thought was that I was surprised by the prediction that The Big Flip will be the new normal in 13 years. I don’t see this societal transition as a big flip at all. At least, I don’t want it to be a big flip. The word “flip” seems to imply that most men will take on the full-time parenting duties, while most women take on the bread-winning duties. But I predict (or at least I hope for) a more equal sharing versus a flip. I predict both parents working, and both parents parenting.

Of course, my prediction is not based on any statistics at all. Mostly, I’m just thinking of my own experience raising kids and earning a living with Ben Blair. Over the last 20 years we’ve both had instances of being the primary breadwinner, and we’ve both had instances of being the stay-at-home-parent. But what seems to work best at our house, is when we’re both working, with jobs that have flexible schedules (this is KEY!), and we’re both taking on the parenting and household duties in pretty equal measures.

I realize our situation wouldn’t work for everybody, but it really does work for us. And it makes me want to advocate for jobs and careers that offer more flexibility. As I mentioned above, flexibility is key!

Anyway, all that to say, what’s your take on the idea of The Big Flip? Has it ever happened at your house? Or with your parents? Do you know many husbands that are stay-at-home-dads? Do you know many women who are the primary breadwinner? For those of you who are same-sex couples with kids, do you split up the responsibilities in traditional ways — one person is the primary breadwinner, one person stays home? What about those of you who are in a couple where both spouses already work outside the home? Do you feel The Big Flip still applies to you? I’d love to hear your thoughts!