Thanksgiving Side Dish: Stuffing with Fennel and Dried Cherries 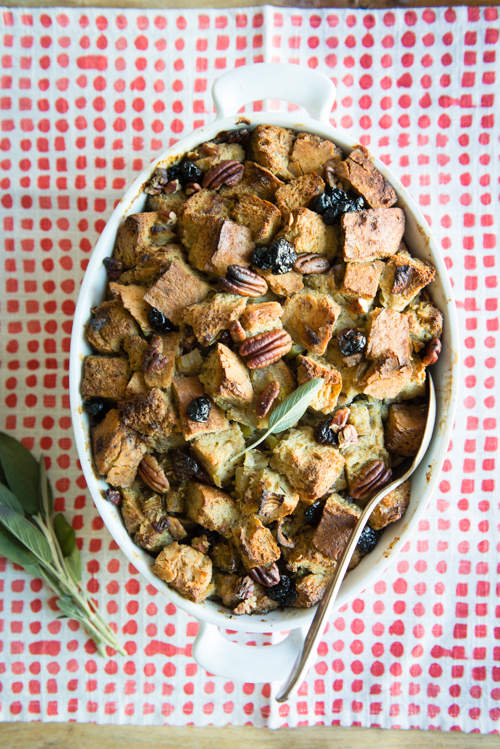 Okay you guys. This is it. Thanksgiving week has arrived! If you’re hosting (I am!) it’s officially time to nail down the menu and track down any specific recipes you want to use. If you’re looking for ideas, I’ve been sharing a few Thanksgiving side dishes throughout the month, and I’ve got one more for you today. It’s one of those traditional Thanksgiving essentials: Stuffing. 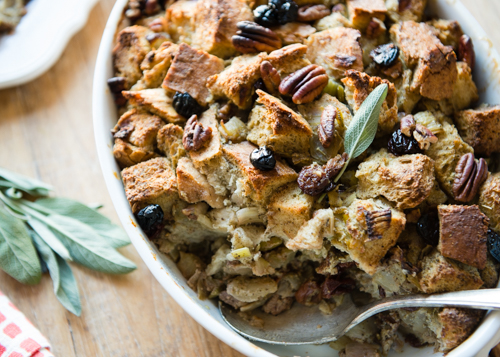 This particular recipe is sprinkled with extras like dried cherries and fennel. Which reminds me that stuffing, which on the surface seems like a not-stressful, pretty basic dish, can actually instigate some pretty big opinions.

From what I can tell, there are 3 separate debates that happen around stuffing. First is the Cornbread vs. Not-Cornbread argument — for some people only a specific kind of stuffing does the trick (you’ll read below that some families make both!). Second is the Simple Stuffing vs. Add-Ins argument. Meaning, do you prefer a simple boxed recipe? Or do you favor adding in extra ingredients and new flavors? And third, do you actually stuff your turkey with the stuffing? Or do you cook the stuffing separately? 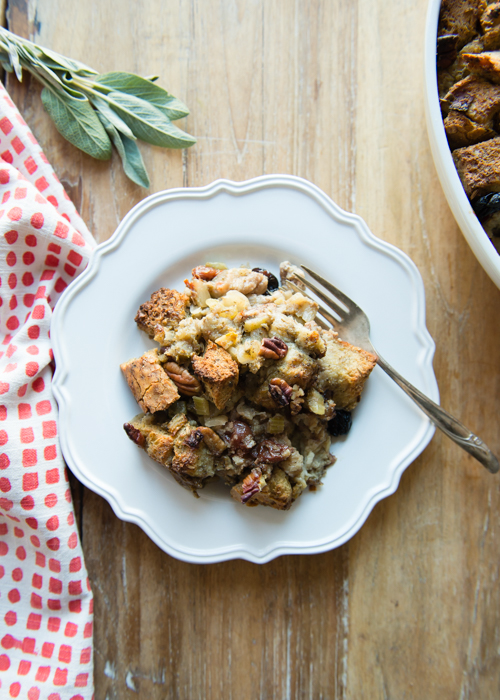 I wonder if the strong opinions come because Thanksgiving is like a giant meal of comfort foods. But it’s not comforting, unless it’s the recipe and the flavors and textures that you grew up with. So you end up with a dozen people at the table, who hear the word stuffing, and all think of something a bit different.

If you’re on the stuffing recipe hunt, Lindsey Johnson has an amazing one for us, but before we jump in, I’d love to hear: Where do you fall on the stuffing debates? Are you team cornbread? Are you team boxed? Do you cook your stuffing in the turkey or outside? Or are you just thankful that someone else is handling the cooking this year? 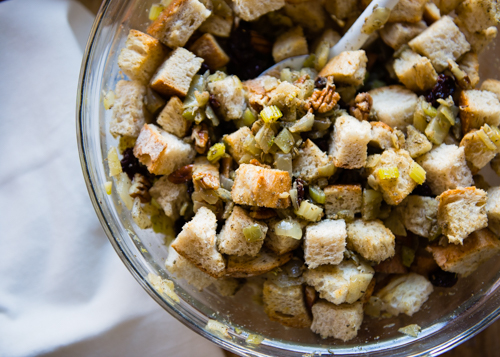 Inevitably, every year I end up making two kinds of stuffing. That may seem like overkill unless you understand the depth of our love for stuffing. I’m gluten-free, but my family is not, so it means we have both gluten-free cornbread stuffing and another kind for my non-gf eaters. This year we are serving up stuffing with fennel, dried cherries, and pecans. I’m calling this “stuffing” but I don’t usually stuff the turkey with the stuffing. So technically this is dressing. Forgive me for using the terms interchangeably here — I do know they are different. :)

I’ve sort of got a formula that I use thanks to a really old issue of Martha Stewart Living. Sometimes I change up the components to match what we’re in the mood for. I’m not someone who makes the same things exactly the same way every year. I like to do little tweaks and add in new recipes to our tried-and-true favorites. So, stuffing. We prefer the type that ends up tasting more like savory bread pudding. Stuffing is essentially dried bread cubes, veggies, and a liquid to help bind everything together. Liquids could be anything from milk or cream to broth with or without the addition of eggs. I’ve even seen some with cheese in them. Anyway, some people prefer a very savory stuffing without any fruit added in. We love adding in dried fruit. I love taking a bite of stuffing that has nuts, veggies, dried fruit, herbs, and all the other good stuff in one bite. 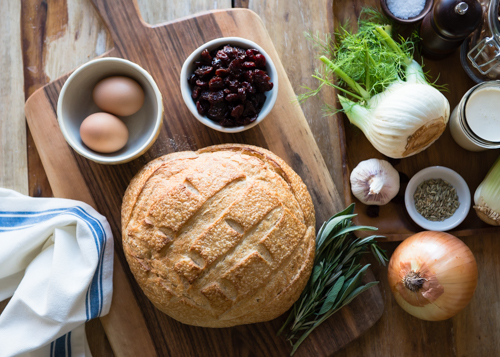 Celery and onions are integral to stuffing, in my opinion. So is loads of herbs, fresh or dried. It doesn’t matter so much, there just needs to be enough to taste. But after those three, there’s room for playing around. The secret to good stuffing is to start with really good bread. I do not buy the little dried cubes you see at the grocery store this time of year. I don’t like how little the cubes are. I use crusty artisan bread with all those holes and pockets for the pecans and dried cherries to hang out in. It absorbs the liquid nicely and the top and edges get nice and crunchy. Let’s be honest, that’s the very best part.

Okay, so a few days before Thanksgiving, cut up a one pound loaf of artisan bread into large-ish cubes. Then let the bread dry out. To speed up the process, you can toast it in the oven on low heat for a few hours. Choose the bread you like the best — sourdough, whole wheat, rye, etc. Baguettes work great because they have so much crust. Yum! 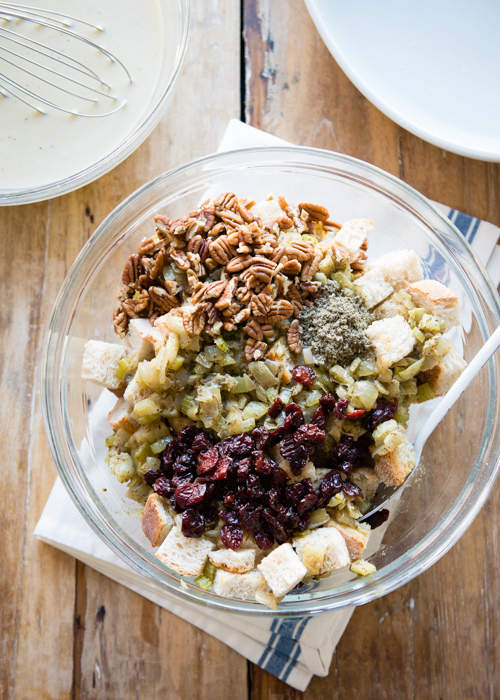 Dice the veggies kind of small. This recipe uses a combination of celery, onions, and fennel. Fennel, in case you’ve never had the pleasure of trying it, is similar to celery, but has a slight licorice flavor. It may sometimes be labeled as “anise.” If you’ve had Italian sausage with those little watermelon looking seeds in it, then you’ll have an idea what fennel tastes like. Those are fennel seeds. And they are delicious.

Now, if you are a black licorice hater and think there’s no way you’ll ever add fennel to your stuffing, I beg you to reconsider! Fennel has become one of my very favorite veggies, and actually made me not hate black licorice anymore. It’s an acquired taste, I know, but it’s very mild in the stuffing and gives it an almost sausage-like taste in combination with the garlic and sage.

The veggies need to be sautéed well so they aren’t crunchy in the stuffing. The only crunchy things in the stuffing should be the nuts and the browned top and edges. The dried fruit adds a lot of natural sweetness. Our favorites are dried apricots, cherries, currants, and cranberries. Raisins are okay, too, but we usually opt for one of the others. I used cherries because they have a nice sweet-tart flavor and they plump up so nicely. And cranberries are in just about everything else this time of year (no complaints from me!) so it’s nice to add a new flavor into the mix. 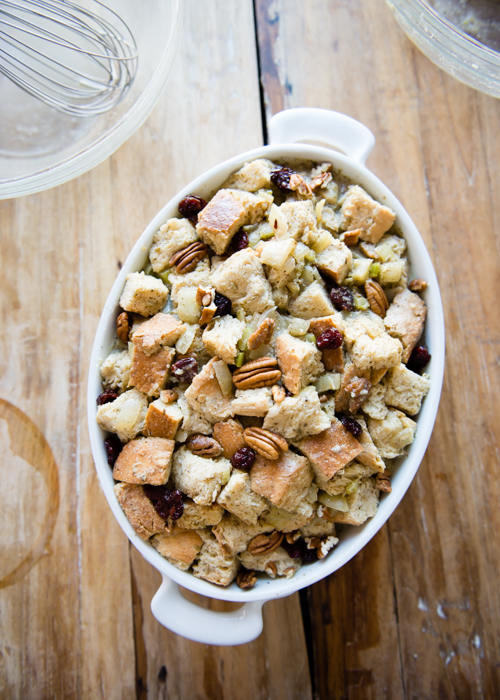 As far as the liquid goes, I use a high-quality chicken or turkey stock usually. You can use what you like. Taste it first to make sure it’s not too salty or bland. That way you’ll know if you need to add more or less salt when you’re mixing things up. I like the richness of adding a little cream. If you don’t want to go that direction, you can just leave it out. It won’t hurt anything. The eggs are there as a binder, they hold the stuffing together. But you don’t have to use them either if you prefer not to.

If the bread you used is extra stale or dry, let the stuffing sit for about 15-20 minutes before you bake to let the bread soak up the liquid. There will be a little excess liquid in the bottom of the pan, and that’s okay. 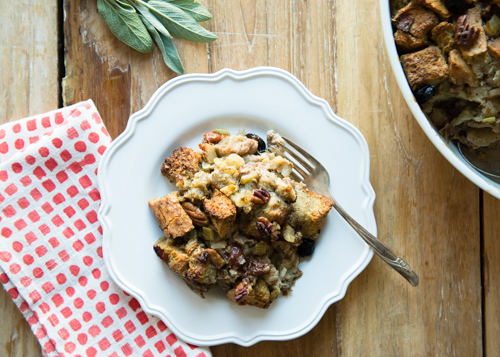 Instructions
1. Grease a large, shallow casserole dish, such as a 9″-by-13″ pan, or two 8″ square pans.
2. Place the bread cubes in a very large bowl and set aside until ready to use.
3. Melt butter in a large skillet over medium-high heat. Once the foaming subsides, add the onions, fennel, and celery. Cook, stirring occasionally, until the vegetables are soft and the onions become translucent, about 10-15 minutes. Add the garlic, and continue cooking until the garlic starts to turn golden. Add the fresh herbs and cook for a minute or two longer. Stir in the pecans and dried fruit. Remove from heat and let cool a bit, then add to the bowl with the bread cubes.
4. In another bowl, whisk together 3 cups stock, cream, and eggs together. Whisk in the salt, pepper, and nutmeg. Pour over the bread cubes and vegetables. Toss to coat. Let stand until most of the liquid has been absorbed, about 15-30 minutes. If it seems to be too dry, or if the bread cubes were really dry to begin with, add more stock. Stir several times for even absorption. At this point, the stuffing can be refrigerated for several hours or overnight, if needed, before baking.
5. Preheat oven to 350°F. Transfer the stuffing to the prepared baking dish(es) and bake for about 30 minutes. Rotate the baking dish and turn the oven up to 400°F. Bake until the top is golden brown and the stuffing has cooked through, about 15-20 minutes more. (Test the stuffing’s doneness with an instant-read thermometer or poke into the center with a fork. If steam escapes and the center no longer looks raw, it is done.)
6. Serve warm.

Notes:
– The cream is optional, but adds an extra richness that is really good. If you don’t want to use it, simply replace it with more stock.
– Other varieties of nuts and dried fruit can be used — choose your favorite! 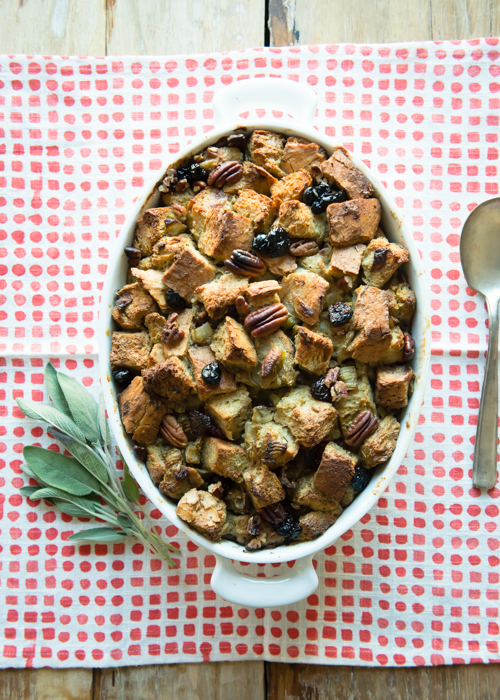 Oh my goodness. That looks amazing, Lindsey! Thank you for sharing it with us. I will be day-dreaming about attending a Thanksgiving meal cooked by you. : )

Alright Dear Readers. Tell me your plans. Will you be serving stuffing this week? Do you have a particular recipe you use, or are you like Lindsey and enjoy mixing it up each year? Also, do you ever make stuffing besides on Thanksgiving? I’d love to hear!