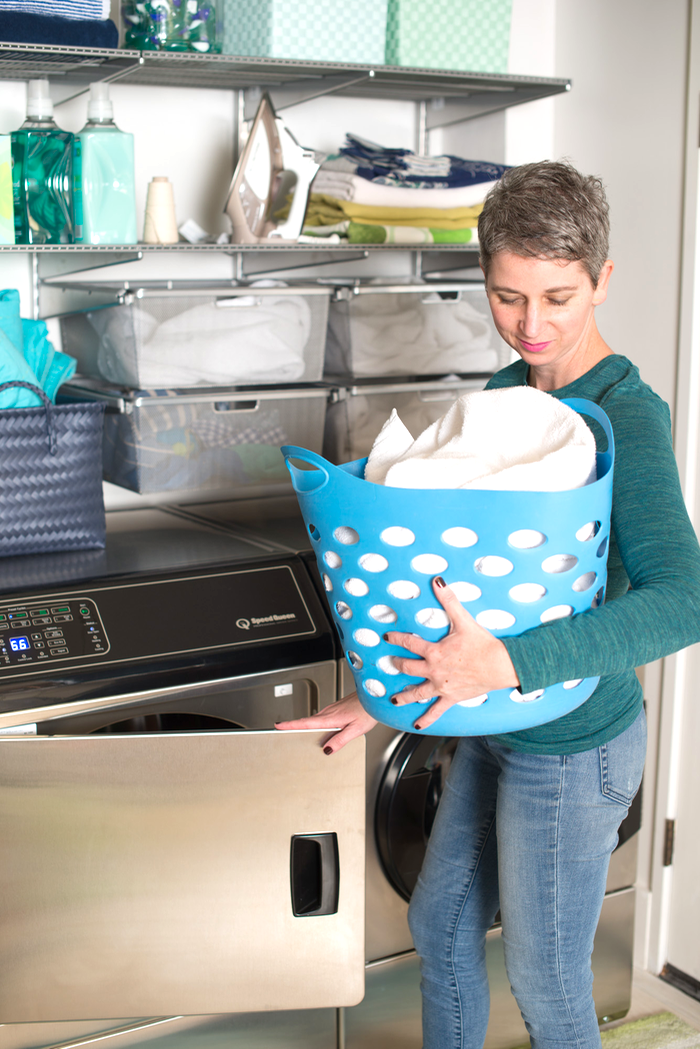 This post is brought to you by Speed Queen.

Things that are making me happy this week: A new washer and dryer set, and some new shelves above them that are making the tiny space so much more useable. Hooray! Which means, I now have some small laundry room ideas to share with you. But first, let’s do a little refresh on the last laundry conversation we had.

A few weeks ago, I mentioned that we were shopping for a new washing machine and dryer, and that I’d never shopped for one before. Turns out every house we’ve lived in (whether we owned or rented) has had a set already installed. So I was feeling a bit intimidated by such a big purchase and didn’t quite know where to start. Well, if you remember the post, you many have seen the comments too. The comments were basically filled with readers expressing their undying affection for Speed Queen washers and dryers. And I’m only slightly exaggerating.

I confess, I had never heard of Speed Queen before! Or if I had, it hadn’t registered with me. So I was super intrigued by all the Speed Queen love and I started to do a bunch of research. 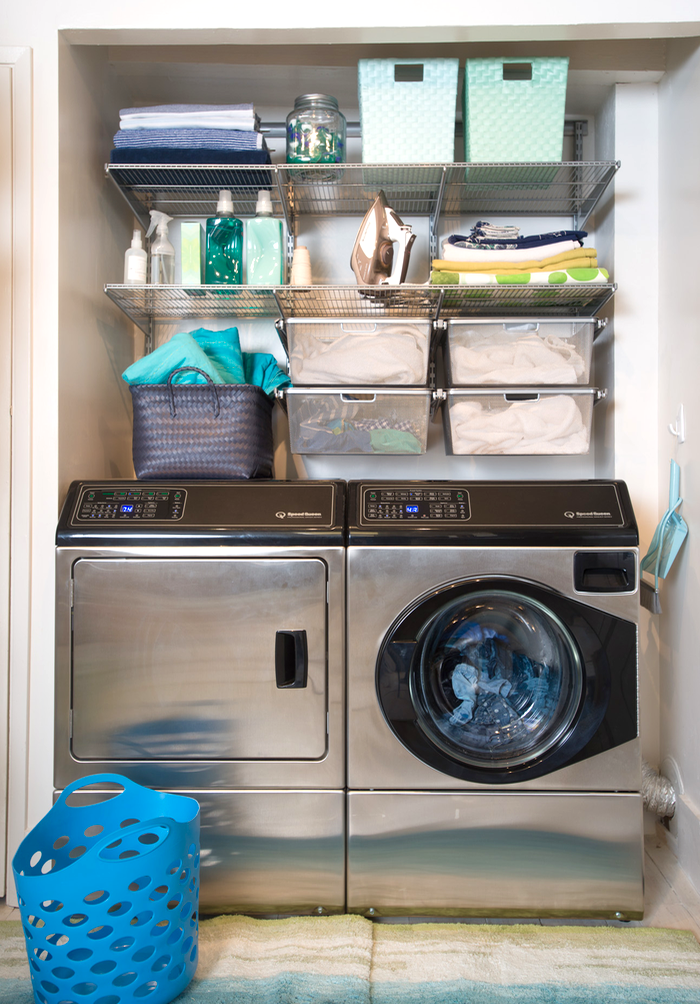 The more I learned, the more I became a Speed Queen fan too. The machines are designed for commercial use and tested in commercial markets (think hospitals, hotels, military bases), so they’re prepared to be used and used hard. Speed Queen equipment is tested to last 10,400 cycles. In the average home, that’s 25 years of use!

They’re made here in America (the company is based in Ripon, Wisconsin), and they use all metal parts. Which is very unusual these days. The machines are really made to last. 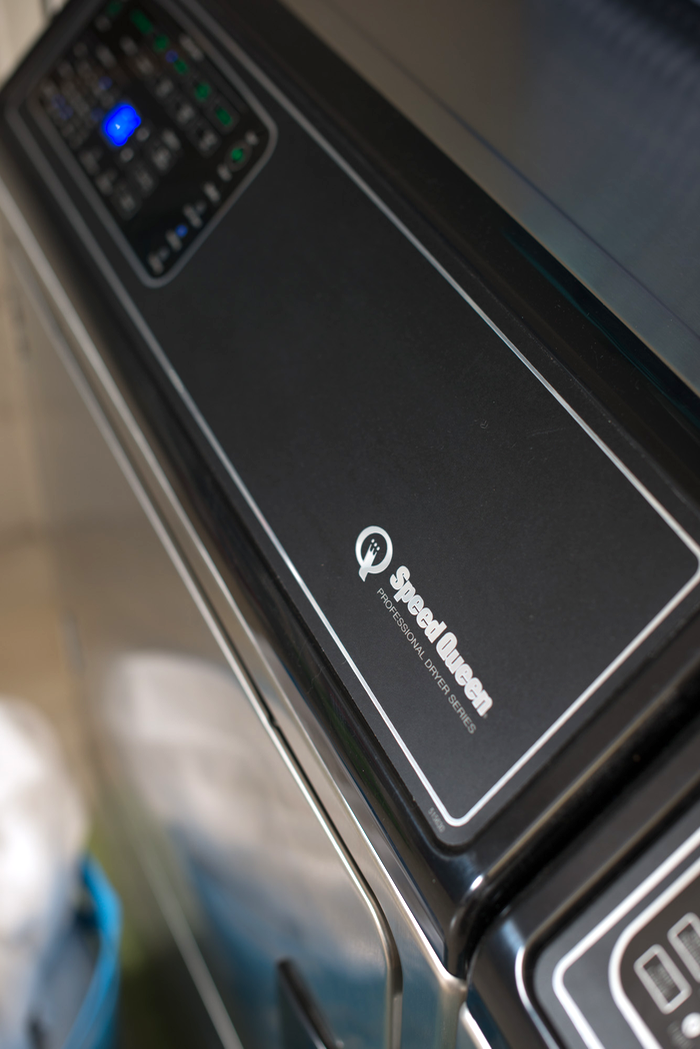 Something else I like is that Speed Queen machines are only sold in small independent shops — no big box stores. (That’s why the brand was so unfamiliar to me!) And they only work with shops that can service the machines if needed, so that you can work with the same shop from purchase through installation and for the next decades and counting.

Eventually, I called Speed Queen and told them I had fallen in love with their machines because of comments from Design Mom readers. We had a nice long talk and I learned a few more things: 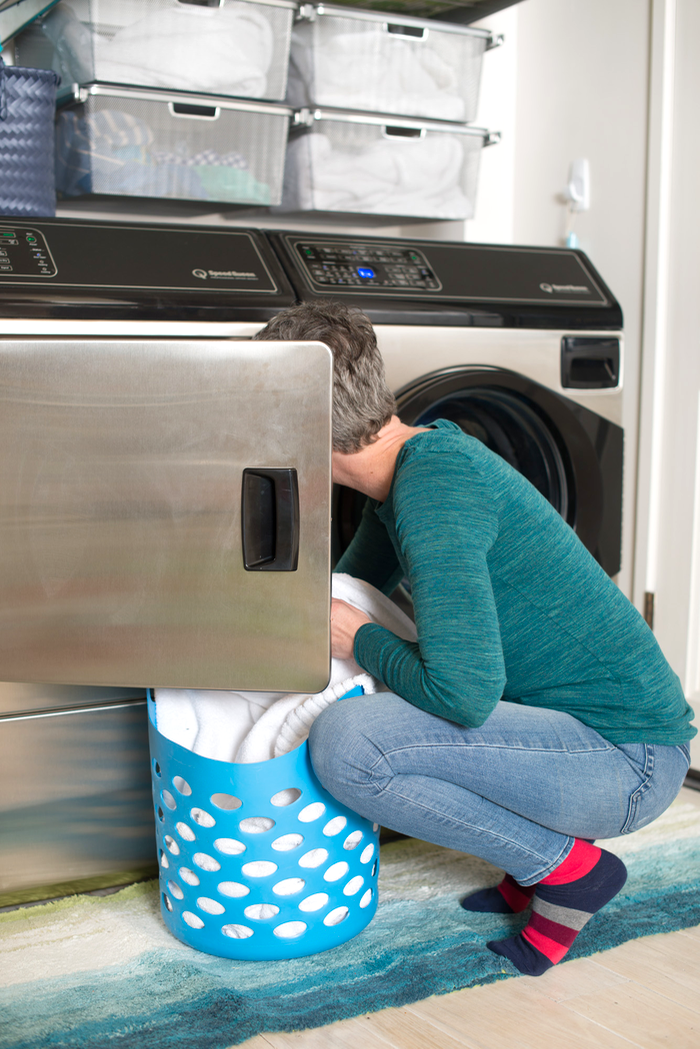 I totally get that. 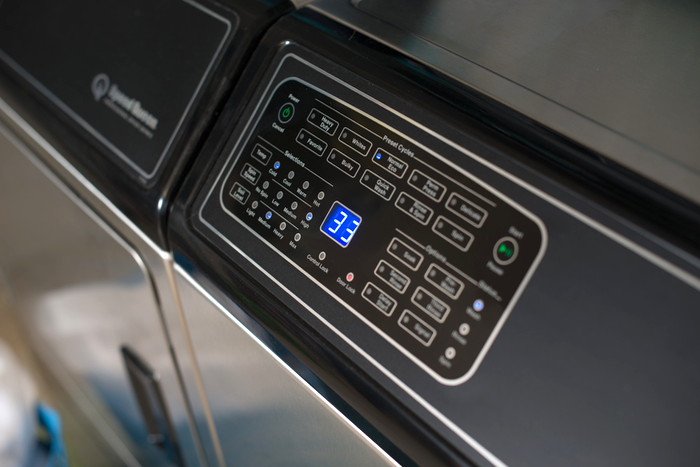 As you can see from the photos, we started and ended our shopping with Speed Queen. We’ve had the machines for a few weeks now and it definitely feels like a honeymoon. We are in love! The machines are at least twice the capacity (maybe 3 times?) of the machines we were using before. The cycles are faster, we use less soap, and the clothes are cleaner! I feel like I’ve cut my laundry time in half. 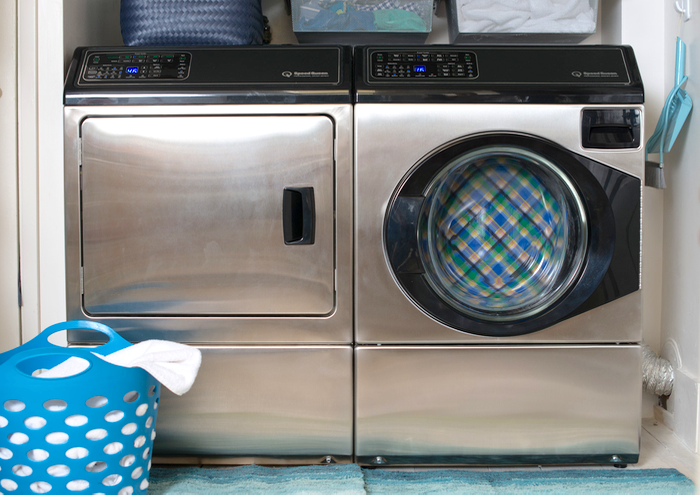 I should also point out the obvious: we went with the front loader instead of the top loader. Based on the comments on the earlier laundry discussion, and the reviews online, that may surprise people, because the top loaders got way more love.

There are definitely some strong opinions out there about front-loading vs. top-loading. Since we’ve used a front-loader for the past 6 years (both here and in France) we are really used to them now, and I actually prefer them.

The big downside in my experience is you can’t easily add something once a wash load is started — like the random sock that fell out of the laundry basket as you walked down the hall. With a top-loader, you just lift the lid and throw it in! But other then that, I favor the front-loaders. From what I’ve seen, they are more efficient and get my laundry cleaner. 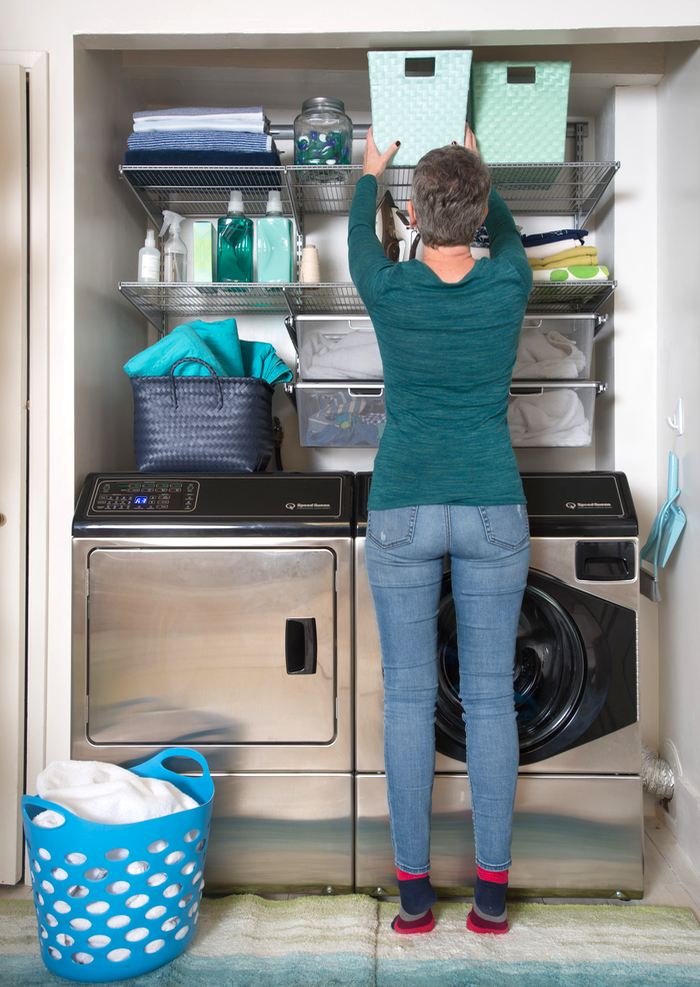 Since we were putting in new machines, we decided to refresh the storage space above, which had been barely functional before. It’s just a tiny little space off the kitchen, so we wanted to make the most of it. If you need small laundry room ideas, here are my tips:

Since the drawers are mesh, I can easily see what’s inside and when there’s enough to start a load. 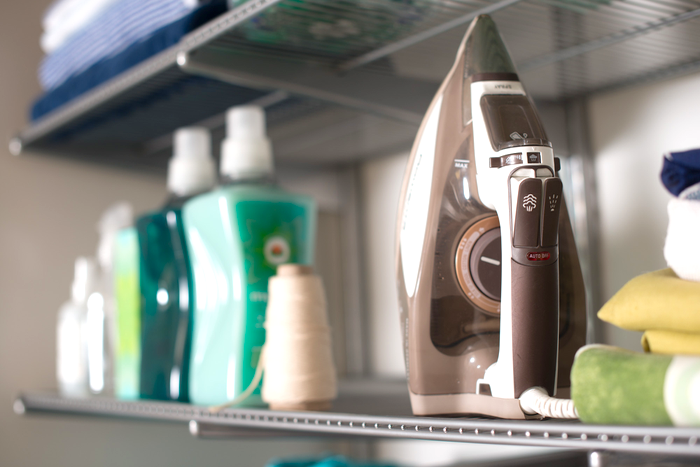 2) We added deep shelves. Laundry machines are big and they often don’t sit flat against the wall because of the vent pipe. So it’s a reach to get to the wall. When thinking about adding shelves, use the deepest ones you can find. Otherwise, they won’t be reachable and you’ll end up not using them. 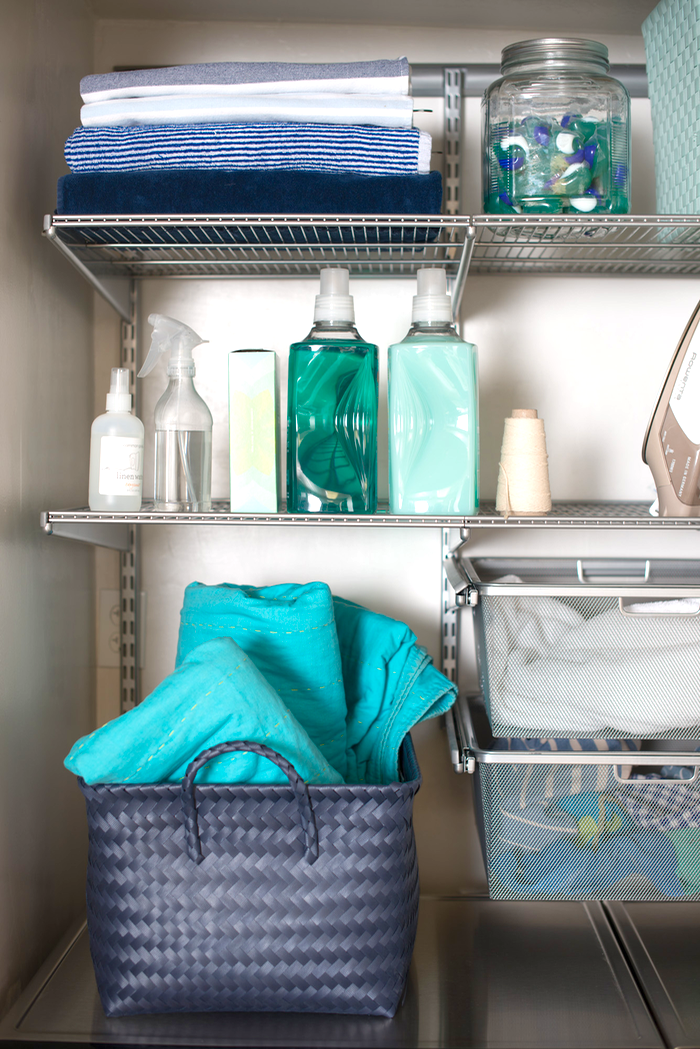 3) Leave space for laundry baskets. Laundry baskets need somewhere to live when they aren’t in use. So I left a space just for them on top of the dryer. Oh. That reminds me, if you’re choosing a top loader make sure to leave room to open it — no shelves directly above! 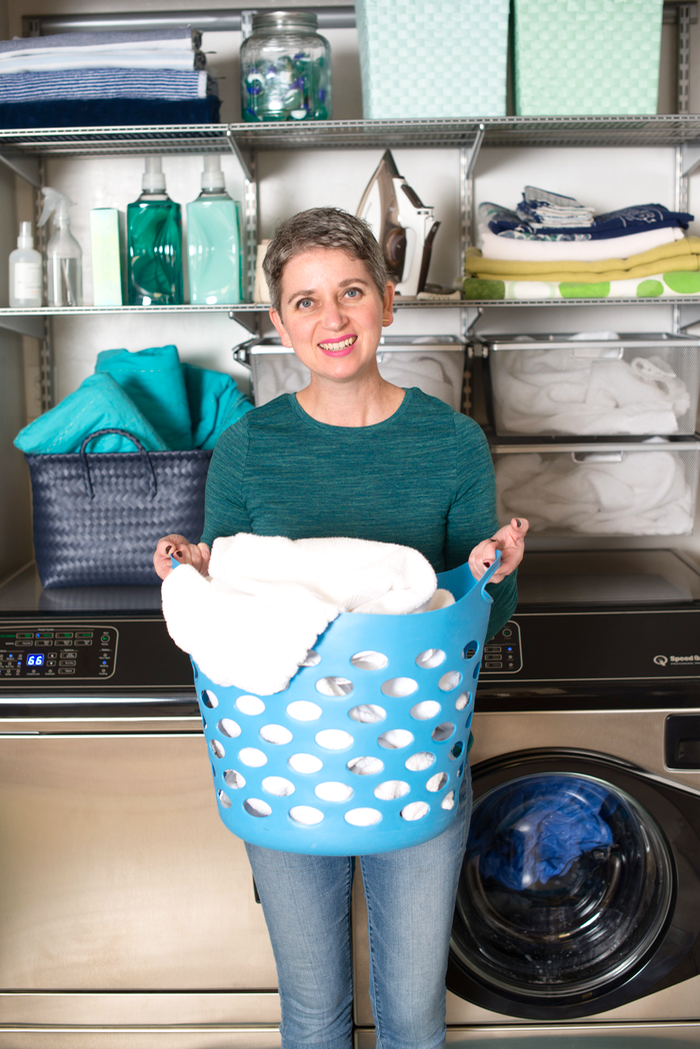 4) This is the last tip, but I recommend starting with this one: Don’t be in a hurry. Live with the space first and see how you really use it, before you go to the effort of installing anything. Will you want to fold on top of the machines? Will you want to include an ironing board in the space? Take some time to figure all this out before you add shelves or drawers or anything else.

I can tell you, I’m already so much happier with our small laundry room. The whole space feels like it has had a huge upgrade!

Now it’s your turn. Have you ever heard of Speed Queen? How many years do you expect your washer and dryer to last? If you were shopping for a new washer, would you go front-loader or top-loader? Also, what’s your current laundry situation like? Do you have a cheery laundry room or are your machines in a dark basement? (Been there, done that.) I’d love to hear!