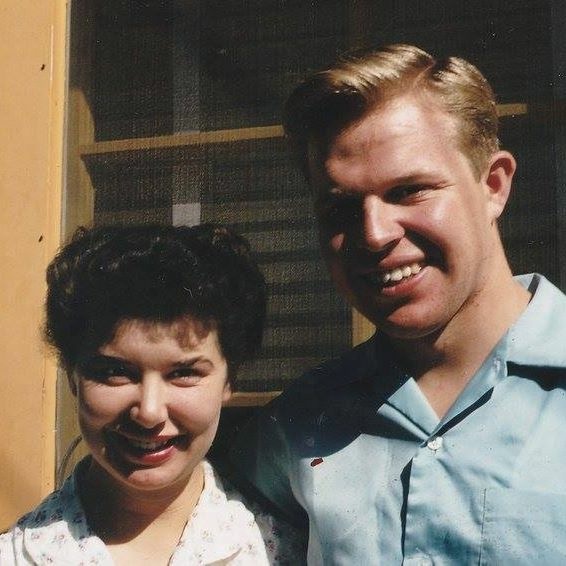 By Gabrielle. I love this photo of my wonderful in-laws!

We have some sad news. Ben Blair’s father died early this morning. He was 85 years old.

A little bragging about my father-in-law in the form of 3 trivia tidbits:

– Robert Blair was a linguist by profession and was incredibly gifted at learning languages. He could speak 8 languages fluently, and 40+ languages with a vocabulary of 200 words or more.

– I didn’t meet him until after Ben Blair and I were married. He was serving as a Mission President for 3 years in the Baltic States (Latvia, Lithuania, and Estonia) and couldn’t return for the wedding. While he was a was there, he had missionaries who spoke Latvian, Lithuanian, Estonian, Russian, Finnish, and English. He interacted with each of them in their native language.

A little more about him. He was a champion of all 8 of his kids. I remember how encouraging he was whenever Ben and I wanted to do something bold, like move to New York or move to France. He took great delight in his grandkids (and he had 33 of them! And 5 great grandkids too!). When we visited, he would challenge his grandkids with language puzzles that he had created himself, and send them home speaking new words in any number of languages. He adored his wife and loved being with her. I remember that when they were on their mission, Ben’s mom came back to U.S. for a week and Ben’s dad couldn’t wait for her to return.

He was on dialysis for a long, long time, and there have been at least a dozen times over the last dozen years where we thought we would lose him. There were emergency trips to “say goodbye to Dad” from New York, from Colorado, from France, and from California. But his will to live was so strong! He had projects he wanted to do! Language courses he wanted to write! Eventually, he would recover and get right back to work.

After so many recoveries, I suppose I sort of thought he would never actually die.

We received the phone call from Ben’s sister, Lisa, this morning. The kids had gone to school early, except for June, and we were getting her ready for the day. Immediately, we were plunged into the incongruities of mourning. Calling loved ones with the sad news, while packing June a lunch. Sitting on the sofa for a cry, and then answering the door for a UPS delivery. Looking at the calendar and considering dates for the funeral, while driving June to school. Putting a smile on at Kindergarten drop-off and answering, “Great!” when asked, “How are you?”, because the news is too new, and I’m not ready to talk about it. Thinking about the day ahead of us — do we clear our schedule? Or do we run errands as usual? What about the appointment at the car place? Hold on, I need to break for more tears.

The incongruities are not new to me, but even though they are familiar, they are ever strange. No doubt many of you have felt them too.

So here we are, reminiscing about this great man, trying to come to terms with the idea that he’s really gone, while also carrying on with our day. Thanks for being here with us.

Goodbye, Dad. We miss you already.

P.S. — More about Ben’s dad’s side of the family here.