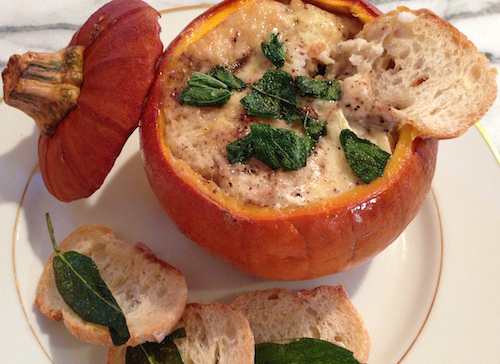 Supper is our favorite Halloween tradition. That’s really saying something, since we’re the crafty sort of people who start making our costumes before summer is even over and have been planning our son’s first Halloween costume since before he was even born. (We’re doing a Jurassic Park theme this year, and he’s a baby dinosaur. I’ve been working hard on his baby triceratops costume for awhile, and I think it’s come together pretty well! I just hope I finish before tomorrow.)

We love the whole trick-or-treating concept (and trunk-or-treating, our church’s version) and being neighborly with friends while watching the little ones have too much fun, too late at night, and with too much candy. We enjoy all of these things, but we don’t like them nearly as much as we love Halloween supper. And that’s because on Halloween, we eat our supper straight out of a pumpkin.

This annual feast began a few years ago, back when I lived in New York and my husband, Bill, made the trek up to see me from Marine Corps Base Quantico as often as possible. No matter what, he made it for Halloween. Halloween in New York is unlike Halloween anywhere else and worth experiencing like a local at least once in your life. The whole city seems to celebrate it, and watching children file in and out of all the neighborhood stores on Broadway only heightens the communal enthusiasm.

As a childless adult living in a building that was as childless too, I had to look for Halloween goodness elsewhere. I found it in Ruth Reichl’s pumpkin soup. It’s really more like a gratin: Cheesy, bready, pumpkiny deliciousness baked and presented rather gloriously in the gourd itself.

Ruth’s original recipe calls for heavy cream, toasted baguette, and a good swiss to be layered together in a hallowed-out pumpkin and baked for two hours at 300 degrees. After making it the first time, we decided to slightly alter the recipe to ensure we didn’t celebrate our next Halloween in a clogged artery-enduced grave. Now we use chicken broth and whole milk in the place of the cream, and it works like a charm.

The basics are pretty easy: Hollow out a flat-bottomed food pumpkin (an important note, because if you use a Jack-o-Lantern pumpkin, as we once did purely by mistake, it’s not delicious, not at all) and toast up a good baguette. Don’t use whole wheat. I’ve tried it, it doesn’t work as well.

Preheat your oven to 300 degrees and, while the oven warms up, layer the toast and cheese inside the pumpkin. Fill it all the way up to the top. There is no such thing as too much cheese! Or toast! Or cheesy pumpkin toast!

Now for the liquid, you can do as Ruth does and go for the heavy cream, or you can substitute as you see fit. We’ve found about a cup and a half of liquid does the job for one small pumpkin, and we use an even split between milk and chicken stock. Add a little salt, pepper, and nutmeg to the mix, and pour it over the cheese and bread.

Put the lid on the pumpkin and gently brush the pumpkin with a little oil. It helps it stay pretty when it bakes.

As for cheeses, we do a mix of Emmental and Gruyer with a little brie layered in for fun, which gives it a rich, creamy depth the heavy cream never did. As you scoop the soup/gratin out, you pull the pumpkin flesh with it, and the whole thing is just sumptuous. We serve it with crispy fried sage and, when I really have my act together, candied bacon.

An equally delicious and more savory variation would be to use blue cheese in the place of brie and sourdough instead of baguette, and I can’t help thinking that the crunch of pepitas would add a welcomed fanfare on top or maybe some pistachios.

While we largely pass up the candy at this point (except Swedish Fish and Mike and Ikes, which I consume in quantities that would make my dentist squirm), this pumpkin feast is one we look forward to every year as our big treat on Halloween. As much as Jack-o-Lanterns on our front porch and welcoming the neighbors’ kids in costume, our meal-in-a-pumpkin has come to mark Halloween for us. It’s an ooey, gooey ode to fall, and one I can’t wait to dig into tonight.

Tell me: What do you fix for dinner on Halloween night? Do you have anything special planned tonight?