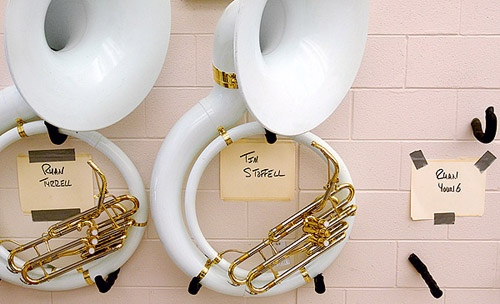 When locals heard which public high school our new home was assigned to here in Oakland, they made uncomfortable noises and told us to look it up on Great Schools. So we did.

Two. Two? What does that even mean? Is the school some sort of black hole of despair? Partially burned to the ground, with students desperately navigating through the smoking, charred remains? Has the National Guard been called out to patrol the campus? Is disease and ruin running rampant among the students? What in the world is a “two” school even like?

I could not have been more curious.

The week before school started, we visited campus for the first time, for Maude’s freshman registration. As we walked through the parking lot, we heard music playing in the quad (it was Michael Jackson, in case you’re curious), saw tents and tables set up for each of the different clubs and organizations. And saw nervous parents and nervous 14 year olds not sure where to start. So far so good.

And then the upperclassmen started welcoming the freshmen. And the older kids were so friendly and outgoing! The sports teams were enthusiastically recruiting. So was the debate team. Key Club and Build On were offering service opportunities for students and reminding them that service “looks great on your college applications”. We heard more about the legendary theater department (apparently Tom Hanks graduated from this high school and several years ago generously donated funds to ramp up the Performing Arts classes). Students were kind and confident. And they were cool.

Like really cool. I kept thinking: Oh. These guys are the real deal. They aren’t trying to take fashion inspiration from urban culture. They’re creating it.

In short: We love the high school! Here are a few more tidbits:

– On registration days, we saw tons of parental support — a father or mother, taking time off work in the middle of the day to attend with their child, and to make sure all the paperwork is in order. But there were definitely some kids that were navigating the registration system and paperwork on their own.

– There aren’t school buses. Students come from all over the city and they mostly use public transportation to get there. Very, very few drive their own cars.

– The campus is closed. Meaning everyone eats lunch in the cafeteria. Lunch is very short (at least compared to France) and our kids bring their own, but they said that’s unusual. Most kids pick up something at school.

– There is a dress code. No spaghetti straps, no shorts or skirts more than 6 inches above the knee, no underwear/boxers showing, etc. We have seen it enforced. On Monday, we were waiting in the school office and saw a father come to pick up his daughter because her jeans had slashes up the front of her legs. But the kids have told us it’s not widely or consistently enforced.

– We’re about two weeks in and lockers haven’t been assigned yet. Not sure what that’s about.

– We keep begging Ralph and Maude for details, but because they’ve never attended another American high school, they aren’t necessarily aware of what’s different about this school. But in their daily how-was-school-today reports, there’s often some mention that makes me smile. Like when they mentioned that at lunch, kids turn on music (loud!) and people dance on the tables. I told them that I had never seen a high school where that happened except in movies.

– In the freshman classes and the more challenging classes (like AP History), students are generally respectful. But during other classes, it’s not unusual for the kids to talk over the teacher and cause problems.

– There are lots of extra-curricular options. Maude has joined the cross-country team. Ralph is doing marching band. They’re both joining the debate team. Maude wants to work for the school paper. Ralph wants to try out for a play.

– The campus is on prime property with amazing views of the Bay. In fact, the houses surrounding the school sell for crazy high prices. But interestingly, the residents around the school generally don’t send their kids there, and opt for private school instead.

– Tattoos are everywhere on campus. On the teachers and staff, too. And language is rough. Even some of the teachers cuss.

– We met with the freshman counselor to go over a 4 year plan for Maude and we were impressed. There are excellent classes available and we really like the counselor. She’s young, and she herself is a graduate of this high school. (We’ll meet with Ralph’s counselor soon.)

Our conclusion: Great Schools isn’t doing anyone any favors by labeling a school with a two. It may be reflective of test scores, but ultimately it doesn’t tell us anything of real value. And it must be a huge downer for the 1800 students attending this school if they’re aware of it. More instructive to me? There’s a list on the school website of the universities where graduates of the class of 2013 were accepted. Pretty much every top university is on the list. (Yes, even Harvard.) This tells me no doors close for my kids by attending this school. And details like the dancing at the lunch? They tell me that attending this school will be every bit as mind-opening as living in France was.

I’d love to hear what you think. Do you live in a community where it’s hard to find a good school? Would you ever consider sending your kids to a school that’s rated 2 out of 10?

P.S. — Would we ever pull the kids out of this school? Sure. If we felt they were unsafe in any way, we’d find alternatives. And if they felt doors were closing — that they weren’t able to learn what they needed to learn — we’d look at other options. (For example, the Oakland School of the Arts, a local charter school, sounds like it could also be a good fit for our kids.) But as of now, they’re both happy and thriving. As long as that continues, we’re good.