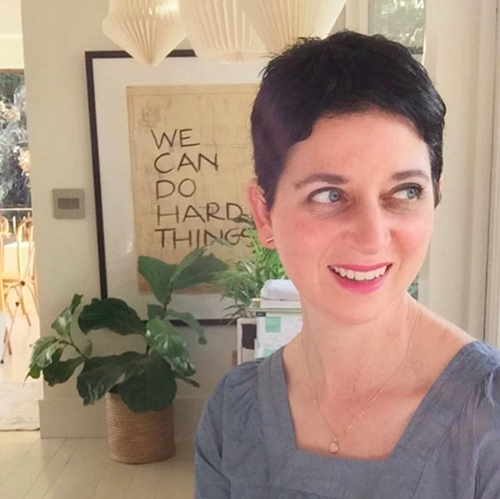 Guess who chopped her hair off!

I love the new pixie cut so much!! It feels really familiar to me. Even though I haven’t had this cut during my blogging years, I wore it this way for a good chunk of my twenties and into my thirties, and I feel really at home with this hair style.

A little note: I started writing what a I thought was a quick post about my pixie cut, and it turned into a dozen+ paragraphs! So don’t feel like you have to read this. The summary is: I love the new cut and color, and my hair is 75% grey now, so this color is totally fake (the platinum was actually much closer to my current natural color). If you want the long version, feel free to keep reading. : )

I’ve been thinking it was time for a pixie cut for a looong time now. Heck, it started even before I decided to go blonde. But I ended up doing it on the spur of the moment.

Here’s a history of me and pixie cuts:

From 23 to 25, I wore my hair in a very short pixie cut, and I loved it. I loved how it looked and I loved that the daily maintenance took seconds. I had two little babies in those years and I didn’t have any patience, or even capacity, for spending time on my hair. But with a pixie cut, I felt stylish and I felt like my hair looked intentional without taking daily maintenance.

When I was 27, we moved to New York. I had been growing my hair out for a couple of years and was wearing it really curly. But about a year after we got there, I got a pixie cut again, and wore it that way until about 31. I was having more babies and it was just so easy. And it took up less brain space. I didn’t have to think about how to style it, or if and when I should cut it. It was like having a uniform — the decisions were already made.

During those New York years, money was so darn tight, and the pixie cut offered two additional benefits: 1) I wore my hair so short that Ben Blair could give me my monthly trims with our clippers. It saved money, but it also saved time. Trying to make a hair appointment and get a sitter for the little ones was such a headache. But I could skip all that, and get my haircuts at home, after the kids were all in bed. The ultimate convenience! And 2), by age 27 my hair was about 15% grey. I went grey quite early. So I started to dye my hair to cover the grey — I wasn’t going for a new color, just trying to match my natural dark brown. And since it was so short, I could do at-home dye without it looking like a total hack job. This was a big budget saver.

Around the time I started this blog, I was growing out my hair again. I LOVED having a pixie cut, but I had this realization that If I didn’t grown my hair out, there was a good chance I was going to have the exact same haircut for the rest of my life. I know that’s not a tragedy or anything, but the idea didn’t sit well with me. I wanted to experience wearing long hair again. So for the last decade, I’ve tried my hair at all sorts of lengths (and a few colors too!), but never pixie short.

As I was approaching my 40th birthday, I started craving a pixie cut again. But then, I thought to myself, I’ve had brown hair my whole life, why not try something else? And I hatched a plan: I wanted to try a totally different hairstyle every month or so of my 40th year. I would go blonde! Then try bangs! Then try a pastel color! Then cut off 6 inches! Then try a wig! Then cut off more inches! Then try red hair! And eventually, I’d end with a pixie!

Well, that didn’t happen. I mean, I started out well, getting bangs right around my 40th birthday. But it took me ages to make the appointment to go blonde. Like months and months! And once I’d had the first appointment, it took even more months to get it really platinum, which was something I also wanted to try. I ended up staying blonde for so much longer than I originally thought I would. I suppose it was because it took so much time to get there, that once I had things settled, I didn’t want to mess with the program.

Then last month, right before Christmas, I scheduled an appointment to get my roots colored as usual. I was a couple weeks overdue for an appointment because December had been so over-scheduled, so my roots were already too long, and I wanted to get a refresher for the holidays. Alas, I had to cancel the appointment because of sickness! And then we ended up taking the last-minute trip to Utah, and boy oh boy, my roots looks shaggy the whole dang time. My snow hat was my best friend on that trip!

But missing that color appointment turned out to be a game changer. When we got back to Oakland, I scheduled another color appointment. This time, I had Alt Summit in mind, and wanted to get my hair color into good shape. At this point, my roots were quite ridiculous. Maybe an inch and a half? But the length of my roots got me thinking: What if I cut off all the blonde and could really see what my hair looked like without any color in it?

I was fascinated by the idea, because I’ve been coloring my hair since I was 27. And though I had some idea of how grey it was, based on my roots, it was hard to get a true overall sense of the actual color. I was also curious about the texture of my natural hair. Was it still curly? Color and bleach and age can change hair texture, and I didn’t even know what my current natural hair texture really was. So a couple days before the color appointment I made the decision to get a pixie cut. I would get the cut first, and then decide if I wanted to keep the natural grey, or color it yet again.

Since I knew I was going to get a pixie cut, I also decided to have a little fun. The day before my hair appointment, I chopped my hair chin-length — just me and my kitchen scissors! It was a total hackjob, but there was something really lovely about the experience of cutting it myself. I had never taken scissors to my hair that way before. It felt really bold somehow. Even though I only wore it that way for a day. There’s something about cutting a bunch of your own hair off. Maybe it has to do with knowing I probably won’t ever experience it again. (Side note: I watched the movie, Joy, last night, and really resonated with the scene where she chopped her hair.)

Okay, now it was pixie day. But I hadn’t told my stylist. I went to the appointment, and the first thing she noticed was that I’d chopped my hair to chin length, and we laughed about how awesomely choppy and bad it was. Then I told her I wanted a pixie and showed her some pixie cut inspiration pics so that she understood how short I wanted it. She was totally game. She did the cut dry, and basically chopped off all the blonde. The only blonde remains left were at the top — she left the top a little longer while we discussed color options.

Here it is grey. This is after the blonde has been chopped off, but before the final cut: 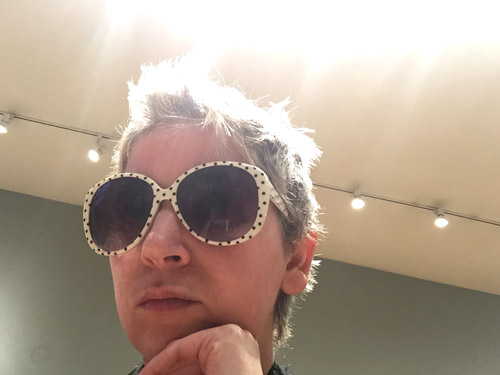 This was the first time it was just me and my hair with no color in a really long time. And boy oh boy had things changed. I had my stylist snap a photo of the back so I could see. We concluded I was now 75% grey. Which is very, very grey!! It’s actually much closer to white than it is to the very dark brown hair I grew up with. My current natural hair doesn’t even hint at dark brown — there’s some steel grey in there, but nothing warm and brown. It’s a completely different color than what I grew up with. Such a funny thing to identify as a brunette, but no longer be a brunette. 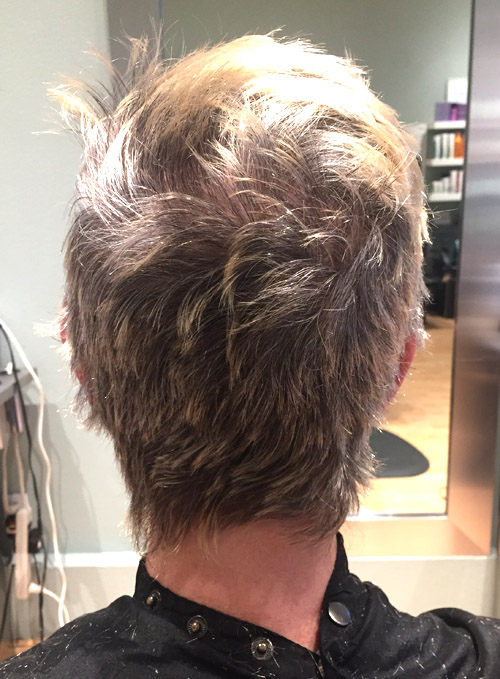 So I stared at that natural hair and we talked about options.

I could wear it naturally grey. I didn’t mind the look of the natural grey — it was fairly silver-y and I was into it. But wearing it grey felt somehow permanent in a way I didn’t want. I wasn’t ready for it. Maybe next year. 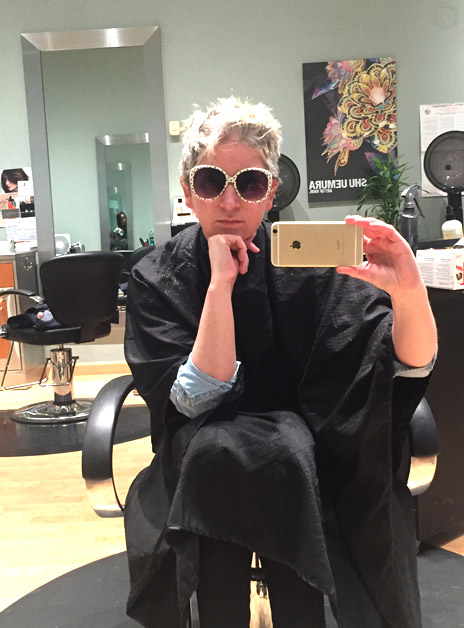 We could take it back to blonde. A white pixie cut! The hair was short and uncolored, and quite light, so it would bleach easily. A white-blonde pixie could be fun! But then I had a similar feeling to the one I’d had a decade ago. My hair would be white on its own — no bleach required — quite soon. And then it would be white for ever after. I had plenty of time for white hair, why not try something else?

So then I thought about Option 3: Another color. We looked at the hair color samples, and we talked about ideas. Blue? Light brown? A pastel color? And my stylist said, “Your hair is so short now, that really, we could try something new color-wise every time you come in.” Well. I loved hearing that! And suddenly, I wanted to go as dark as possible. True black, and then I could switch things up another month.

So she colored it black! And now I have black hair and a pixie cut. And I love it so dang much!

I’ve only had the cut for a bit, but like I said above, it feels like home. I was thinking that might seem like an odd idea to you as Design Mom Readers, because it’s not a cut you are used to seeing me in, but it is a cut I’m used to for myself. At this point in my life, I’ve had all sorts of hair — long, medium, short, pixie, curly, straight, permed, dark brown, medium brown, strawberry blonde, platinum, black. But a short dark pixie cut is how I picture myself in my head.

You deserve a high-five if you read all that! Now it’s your turn. Let’s talk hair!

Have you experimented with your hair much over the years? Have you ever worn your hair super short in a pixie cut? Have you ever chopped your own hair off? Have you found your ideal cut and you plan to stick with it forever? I can’t wait to hear!

P.S. — I still think I want to invest in a good wig! I like the idea of having super short hair, and then another totally different option as well. The whole wig world feels very unfamiliar to me, so it would be something new to learn about too.