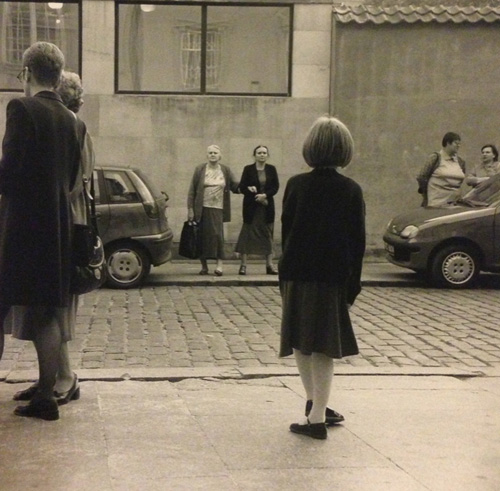 A few months ago I was in a local boutique, and held a skirt up to my waist in a sort of “can I pull this off?” gesture. The owner of the boutique noticed, looked at me, and, I think with the intention of being helpful, explained, “My store … is more for … juniors.”

Oh, boy. I was a little embarrassed, but mostly amused. Was I one of those people, in denial about my age? I don’t think I was quite as far off as the boutique owner suggested (I’m certainly biased, though), but it’s true that I have often thought of myself as younger than I am.

When I was a teenager, anyone over 35 was a varying degree of “old,” and that teenage feeling of perennial youth took a long time to wear off. Now I am 35, and I frequently refer to friends and stories from fifteen or twenty years ago. Twenty years? I do the math and marvel.

My perception of age is further complicated when I think about my role as a mother. I look at our 9-year-old son and often see my little baby, but I have to remind myself how independent and mature I felt as a 9-year-old. As a child, I saw my parents as the ultimate grown ups — the rule-makers who had everything figured out. Do my children think I have everything figured out?

I used to have an idea that traits I considered “grown up” would arrive when I reached a certain age, like a birthday gift I could unwrap and call my own. Maybe one year I’d receive wisdom, and another year understanding, and then I’d officially be grown up. That hasn’t happened yet, and instead I’m learning about the fluidity of age, of wisdom, understanding and life. One thing, though, is for sure: “old” has become a sliding scale, with its defining point being pushed ever a little further away.

What is your perception of your age? Have you ever felt younger or older than you actually are? Do you embrace the aging process, or fight it with every cream and lotion you can find?