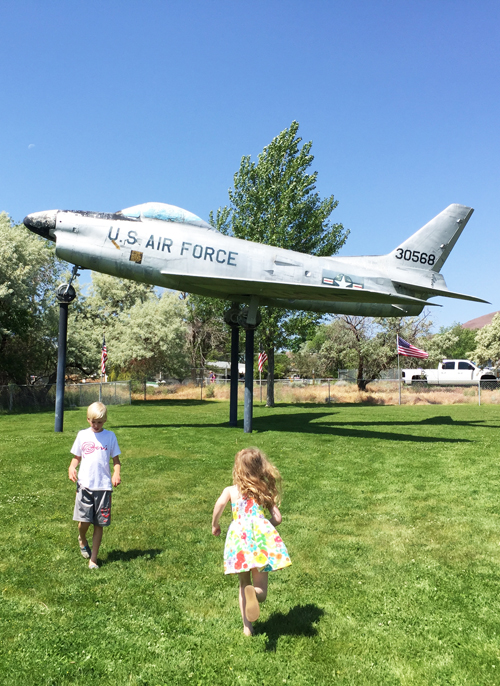 Have you ever heard of Winnemucca? If you’ve ever made the cross country drive from California to New York (or New York to California) on I-80, then you’ve been to Winnemucca. Or, at least driven through it. It’s right in the middle of Nevada and it happens to be the halfway point of our drives from Oakland to Salt Lake City. Mostly, Winnemucca has been a place to fuel up and grab some food on our long drives, but over the weekend, it turned out to be our destination.

Our closest friends from our time in Colorado are a family by the name of Lattin. They have 7 kids who line up pretty well with our six and we spent many, many, many of our Colorado hours hanging out with them. They’ve since moved from Colorado and now live in Weiser — a very small town in Idaho. After looking at the map, we figured out that Winnemucca was about a five hour drive for both us, and we decided to meet up there over the long weekend.

We’ve never done anything quite like that. Instead of making vacation plans for a specific destination (and then seeing friends and family if they happen to be nearby), the destination was an afterthought. The goal was to hang out with our friends, not to sight-see, so the destination didn’t really matter. 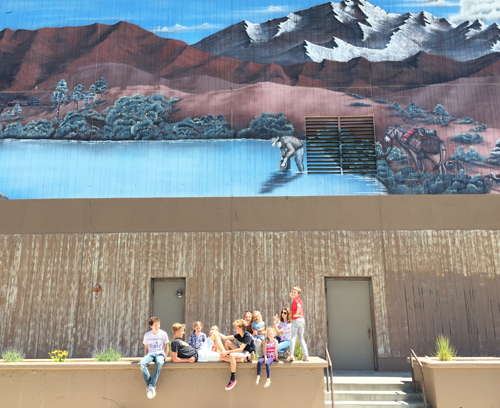 Winnemucca isn’t a famous vacation spot, but it turns out that it was perfect for this sort of getaway! This is why:

1) We had zero things of our must-see list for Winnemucca. If we had met up in New York or San Francisco, or even in Yellowstone, we would have come with a destination-based agenda. We would want to see certain sites, or take certain hikes, or see certain shows. And that means we would have had to coordinate schedules and preferences and budgets and figure out what worked for both families.

2) We had no expectations for this trip other than getting to see our friends. We didn’t care what the hotel was (as long as it had a pool). We didn’t care about what food we would eat. In fact, as we drove up to the hotel, Oscar asked, “What are we doing on this trip?” And I said, “I have no idea. Let’s find out.” Starting with no expectations was ideal. If we did everything the town had to offer, then great! If we did nothing the town had to offer, then great! Either way, we would get to hang out with our friends.

3) Though we didn’t know this before we arrived, it turns out there was plenty to keep us occupied in Winnemucca — but not so many things that we had to make choices or labor over decisions. Again, it was just right. We found a pretty park by the river, sent the teens on a hike to the W on the mountain, found great Mexican food, and swam at the hotel pool. We also took full advantage of the Run-A-Mucca. It’s a 3-day motorcycle rally in it’s 15th year — with booths, live music, and motorcycles everywhere. And it happened to be happening while we were there! 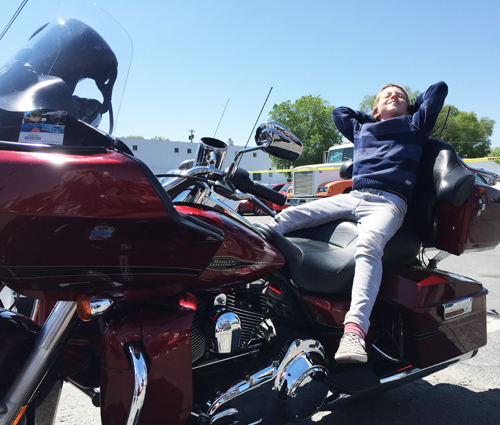 We loved it. The riders were friendly, happy to show off their bikes, and cute about inviting the kids to pose on the bikes for photos. The best part was the Memorial Day program that was part of the rally. On Sunday morning, the motorcycles lined up for a “parade” through town to the Veteran’s Memorial Park. There were hundreds of bikes and they went on for miles (I posted a little video of the parade here). It was amazing! 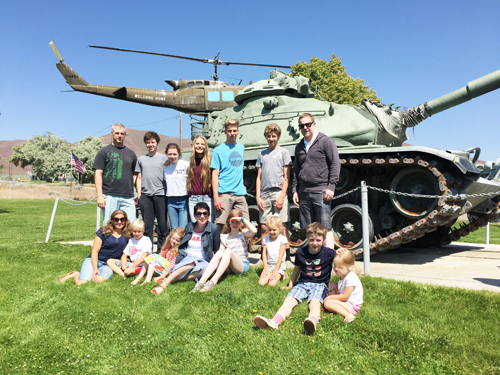 When all the bikes had arrived at the park, there was a sweet and short program with a Color Guard, Amazing Grace played on the bagpipes, a talk about women in the military, a talk from the Mayor of Winnemucca, and another talk by a Veteran who motorcycled across the country on a memorial ride with the men he served with in Vietnam — he said they never had to pay for food or fuel on the whole trip because communities across the nation made donations to thank the men for their service. So great! After the talks, there was a “Blessing on the Bikes”, and Taps played on the trumpet. (Taps always makes me cry.) Oh. And there was a live cannon too! It was shot off as we said, “Amen” to the blessing on the bikes. 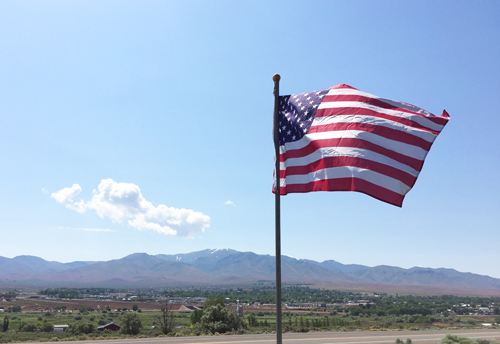 Many of the motorcycle riders were veterans themselves, and everyone in attendance was moved by the words and music. It’s been years since I’ve been to such a good Memorial Day gathering! I felt lucky to be there, and lucky my kids got to see it as well. On the drive home to California, we talked a lot about the Run-A-Mucca and the Memorial Day service. We’ve never sought out a motorcycle rally before, and honestly, I’ve never given them much thought, but it was really wonderful to get a glimpse of this big supportive motorcycle community that I know nothing about. We were really touched by the cross-country memorial ride and want to look one up and see if we can contribute food or funds to the cause.

I know I’ve gone and on about the Run-A-Mucca, and it really was great, but even if it hadn’t been happening, it wouldn’t have mattered. Because by far, the very best part of the trip was getting to connect with our old friends, and knowing there was nothing else on our schedules but: hang out and catch up. It was heaven! And it was easy to see it wouldn’t have been as good if we were visiting their town or they were visiting ours — there are too many responsibilities and distractions when people are at home. Since we were both away, we could concentrate on each other easily. It was lovely.

Now I’m curious. Have you ever taken a similar trip to a non-destination just to spend time with friends or family? As I said, this was our first time, but we loved it so much I hope it becomes a regular thing for us. No distractions of home. No distractions of a popular vacation spot. Just quality time with friends. What do you think? Does it sound appealing to you, or does ignoring the destination seem crazy to you? I’m also curious if you know anyone who drives a Harley Davidson or other big bike. Do they go on lots of roadtrips? Does that appeal to you at all? I’d love to hear!

P.S. — Did you get a chance to do anything to commemorate Memorial Day? We were back here in California on Monday, and Ben Blair took the kids to the city for a ceremony on a military submarine. Each time a name from the “eternal patrol” was read, a bell was rung, and then a child would throw a flower into the sea. It was beautiful.

P.P.S. — Olive has been on a school trip to Washington D.C. since Friday, so she missed our roadtrip. She gets back tonight and I can’t wait. We have missed her like crazy.