I’m totally fascinated by this Indiegogo campaign. It’s called Jibo — and it’s the world’s first family robot. I love this sort of stuff! Watching the video I got all sorts of Jetson’s goosebumps — like I was having a the-future-is-here moment.

Apparently, Jibo recognizes faces, and it will take photos of what’s happening around the room at your request. They say it can even act as a personal assistant — ordering dinner, taking down notes, reading a recipe aloud while you cook — that sort of thing.

Maybe the most interesting part to me is that the creators have built in natural social cues like giggling — the examples on the video seem pretty natural. It looks like Jibo will be able to chat with you. Which again, I find fascinating. It makes me want to discuss predictions from science fiction books, or topics like the Singularity. 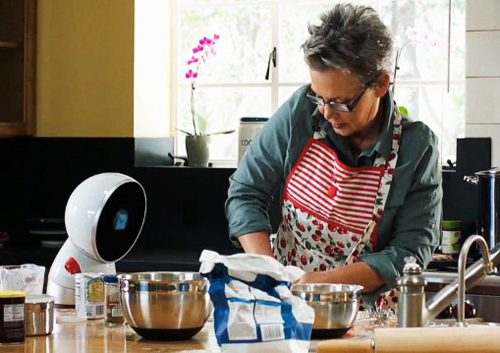 The fundraising project has been hugely successful. Anyone interested can contribute as little as $10 to help make it happen or actually pre-order their own Jibo. And there’s clearly a ton of interest in the robot — the goal was $100,000, and so far over $2 million has been raised.

Have you ever heard of Indiegogo? It’s the largest global crowdfunding platform, with campaigns that have launched from almost every country in the world. And there are millions of dollars being distributed every week due to contributions made by the Indiegogo community. It’s a powerful way to give people a platform.

Indiegogo wants to democratize the way people raise funds for projects, and it empowers people everywhere to fund what matters to them — could be a creative project, something entrepreneurial, or even cause-related. We’re talking all sorts of projects! In fact, here are links to 5 current campaigns — all very different — that I found compelling:

– The country of Palau wants to declare it’s entire island nation a marine sanctuary. This one blows me away.

– One million kids worldwide may never walk because of clubfoot. You can help change that right now.

– A recipe site taken to the next level.

– The Sanaga-Yong Chimpanzee Rescue Center is fundraising to build a forested enclosure for an orphan baby chimpanzee.

– Control Devices and appliances in your home with gestures!

Have you ever tried Indiegogo? Either to launch your own project, or to contribute to someone else’s project? I’d love to hear! And I’m also wondering if any of you are ready to buy a Jibo. How do you feel about the idea of robots in your home? And is there anyone reading that feels this is one step closer to robots taking over?