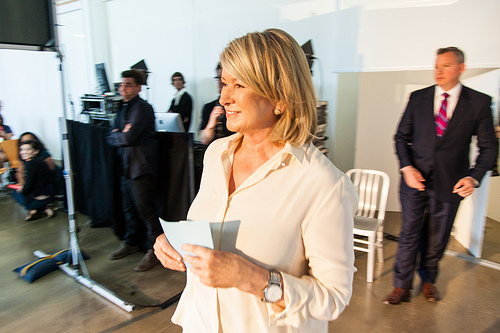 By Gabrielle. Images from Alt Summit NYC by Justin Hackworth.

I just received an email from Martha Stewart. Me, and every website on the MSLO mailing list. I didn’t understand it, and determined that in my tourist haze, I must have missed some bit of news. So I started searching, and found out there is an interview with Martha Stewart that isn’t sunshine and daisies about bloggers. I’m not going to seek out the interview. I’m not going to watch or listen to it. Not because I think it didn’t happen, and not because I’m in denial. 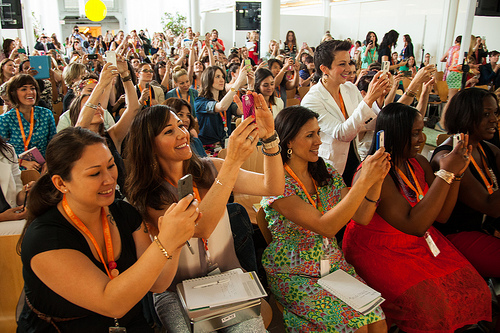 It’s just that actions speak louder than words. And Martha Stewart, along with the entire MSLO staff, has shown in constant outreach how much they support bloggers and the relatively new field of blogging and social media. In fact, if we had to go to court to prove whether or not Martha Stewart liked bloggers, we would have mountains of evidence that she does, and not much to prove otherwise. 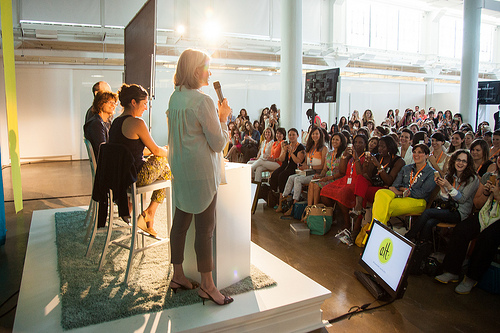 – Martha Stewart was one of the first people in the publishing space to join in with blogging and social media instead of resisting it and fighting against it. There are actually very few heads of big brands that personally keep up a blog and are active on social media. Martha has been a leader for established brands on how to adopt new technologies gracefully, and how to work with bloggers instead of compete against them.

– I was told by a representative at Pinterest that images from marthastewart.com are the most pinned overall. Yes, that benefits MSLO and drives traffic to their site. But it’s also hugely beneficial to pinners everywhere, because pinning great photos is the number one way to grow your Pinterest followers, and MSLO provides an endless stream of excellent, highly pinnable photos that they freely share. Even if you’re not trying to grow your followers, there’s a good chance you’ve been inspired by and pinned MSLO content.

– The MSLO team has collaborated with bloggers from the beginning of blogging — supplying craft products, hosting parties for bloggers, and making their online content available for free. How do I know this? I’ve been the recipient of Martha Stewart craft supplies, I’ve been invited to parties and events at MSLO headquarters (even as a new blogger — which led to an article in the NY Daily News), and I’ve used content from MarthaStewart.com many times on Design Mom, at no cost to me.

– MSLO has promoted bloggers by writing about them and their websites. For example, see the quote in Joanna Goddard’s press section.

– MSLO has promoted bloggers by having them as guests on the Martha Stewart media properties — TV shows, radio shows, webcasts, online video, etc. — I was in an episode of Everyday Food last summer.

– This month marks the second annual American Made event organized by MSLO. This is a massive event that shines wonderful light on small shops and makers — the majority of which are also bloggers and etsy shop owners who grow their businesses through social media.

– MSLO hosted Alt Summit, the conference for design and lifestyle bloggers, twice — inviting attendees to spend the day at the MSLO headquarters. Both years, the MSLO team went all out, decorating the space, throwing parties, giving tours, teaching crafts, speaking on panels and genuinely welcoming the bloggers and attendees.

– During Alt Summit, employees and editors — even the top editors  — at MSLO interacted with the bloggers in attendance as peers, trading tips and looking for ways to work together.

– During Alt Summit, Martha Stewart, even though she had a full schedule, made time to address attendees and discuss her love of blogging and the blogging community. Related, she was the keynote speaker at BlogHer last year.

There is no doubt in my mind that Martha Stewart and MSLO are fully supportive of bloggers. I suppose it would take a lot of years of interactions showing otherwise to convince me the opposite is true. And what about the interview? Bad day? Miscommunication? Frustration? Who knows. I’m not worried about it. Her actions show me she likes bloggers just fine.

Am I personal friend of Martha Stewart? No, just a long-time fan. I have met her, and even been interviewed by her on her radio show. But I expect she would have no idea who I was if I was standing in front of her — the same day I had the pleasure of meeting her, she also met hundreds of other bloggers. : )

I’ve been a fan since I studied to be a graphic designer almost 2 decades ago. In my design classes, her brand new magazine and newly launched product line packaging were held up as a gold standard in graphic design. They still are.

And I’m still a fan.

Full disclosure: I have worked with MSLO many times over the last 7 years of Design Mom. And as I mentioned, Alt Summit, which I am a founder and owner of, has been held at the MSLO headquarters, twice. But neither Design Mom nor Alt Summit is currently under any contracts with MSLO. I just want to make clear I have no stake in this, and that I get no benefit from publishing this. It is simply my honest opinion, and I believe the responses to Martha Stewart’s interview could use some balance.