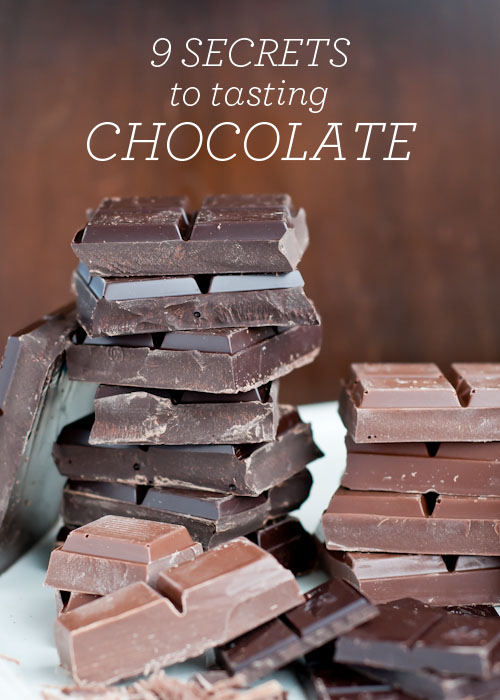 Text and Images by Lindsey Johnson for Design Mom.

Do you remember the first time you had a really good piece of chocolate? I mean the good stuff. Not the sort you steal from your child’s Halloween stash, and certainly not the kind you share freely during play dates. I’m talking about the kind of chocolate that melts slowly on your tongue, and tastes like berries or citrus, maybe even with a hint of coffee at the end. Once you’ve tasted it and found your favorite, this is the chocolate you’ll secret away in a too-high cupboard. One square of the stuff will get you through the witching hour just before dinner, homework time, any end-of-the-day playroom mess you can imagine, and all the deadlines looming before you. Maybe chocolate’s not that magical…but it is delicious. 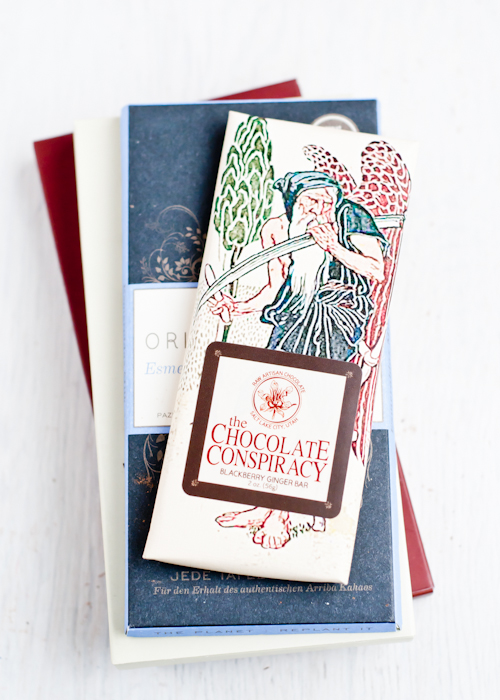 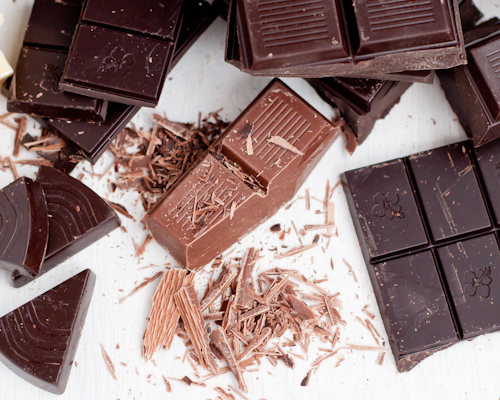 Tasting chocolate has become an art form, a lot like tasting wine and cheese. There are books, classes, and societies all devoted to the art of tasting chocolate. Learning to distinguish between candy chocolate and fine chocolate isn’t as hard as you might think, but it does involve all five senses, and by the time we’ve finished you’ll have developed a sixth sense for understanding, appreciating, and tasting chocolate. 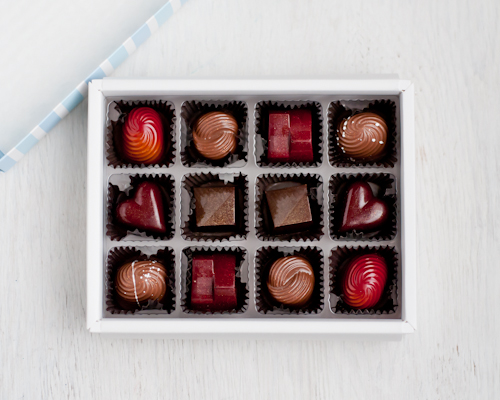 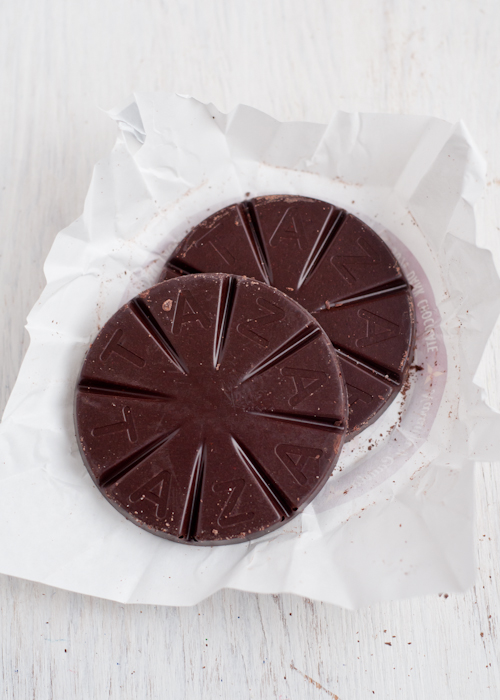 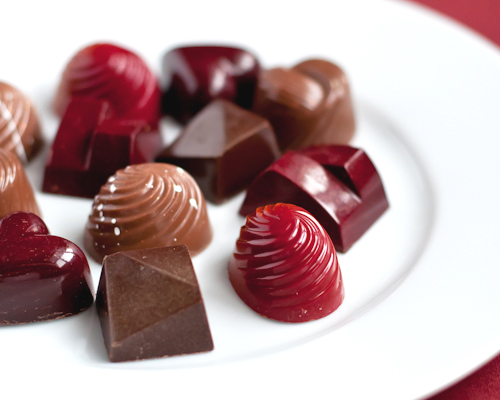 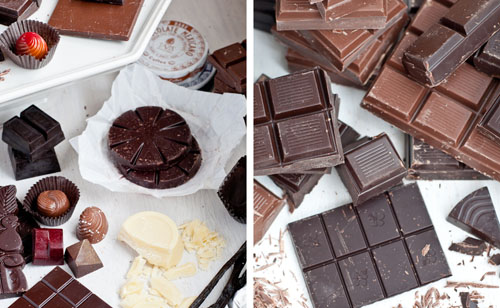 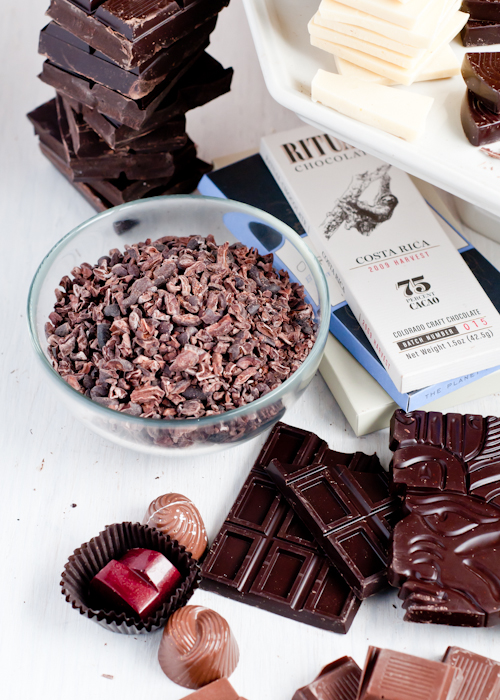 So let’s forget everything we’ve heard about dark chocolate being bitter, let’s dream beyond a Mars bar, and get acquainted with the art of tasting chocolate. Real chocolate. This will be fun! I’ve got some helpful secrets to help turn you into a chocolate-tasting pro. (And, trust me. This is a very fine skill to have!) 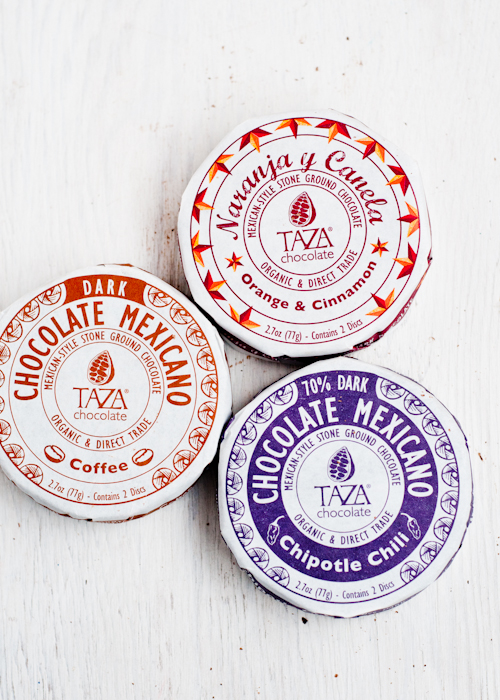 No tasting yet! The first — and most frustrating when you’ve got chocolate within reach! — step to appreciating chocolate is knowing from where it came and how it’s made. Which happens to be Secret Number One:Run a background check on your chocolate.

When I talk about higher quality chocolate, I am referring to chocolate made by artisans in small batches from cacao, often one kind of bean. These are referred to as bean-to-bar, meaning the artisan chocolatier turns the cacao beans to chocolate as opposed to large candy companies that purchase chocolate liquor or solids. 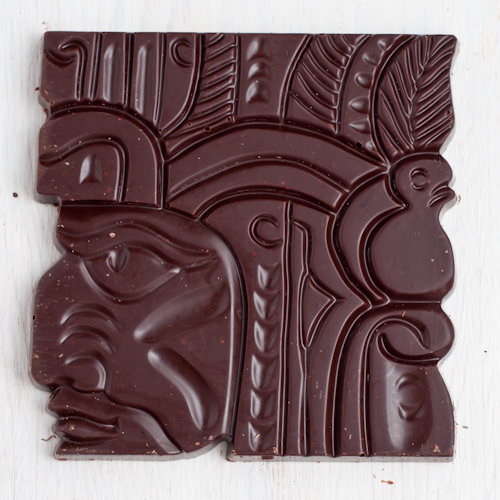 Chocolate comes from cacao, a fruit with a thick, leathery skin. Though it is native to the Americas, Cacao has now been cultivated in tropical climates around the world, close to the equator. The trees require heat and shade, and grow in orchards or groves. Cacao pods grow directly on the trunk of the tree. 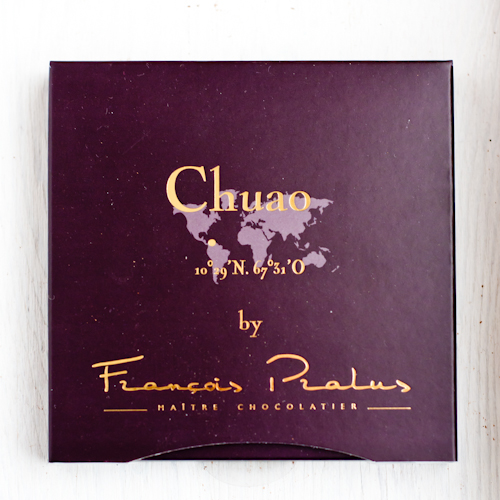 Most of the world’s cacao beans come from West Africa, but they are also grown in the Caribbean Islands, Mexico, Central and South America, and Southeast Asia. Forastero, Criollo, and Trinitario are the three main varieties of cacao used in chocolate production. Forastero makes up the bulk of chocolate worldwide, and is inferior in quality to the Criollo, which is considered the very best and only makes up about five percent of all cacao grown in the world. Secret Number Two: If you remember one thing the next time you’re at a chocolate shop, remember Criollo. You can’t go wrong. 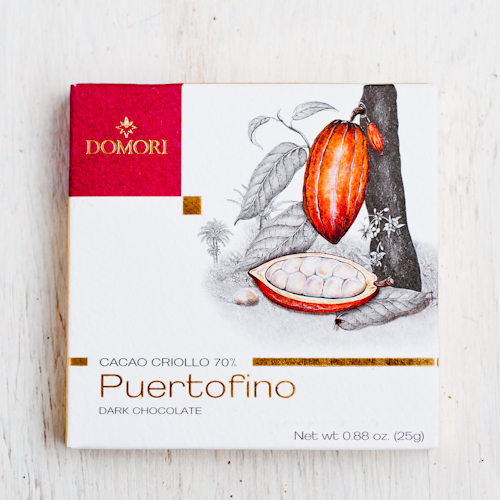 The beans inside the cacao pods are white and mucilaginous. The white pulp is removed from the pods and laid out in the sun to dry and ferment. As the pulp ferments, it leaves behind the reddish brown cocoa seeds. This process is all done by hand, not machine.

Are you still with me? Good, because we’re almost to the tasting part. 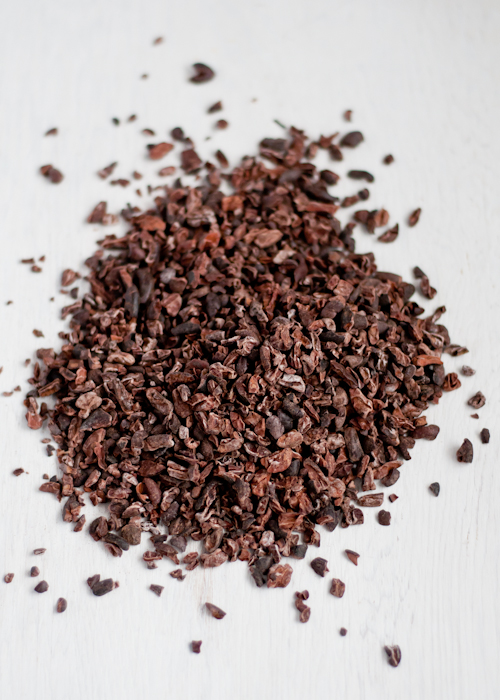 To make one pound of chocolate, 400 of the cocoa beans are required. The beans are bagged and shipped to chocolate makers around the world. Once there, the beans are cracked open and broken into cocoa nibs that are then ground into a paste called chocolate liquor. It is then mixed with other ingredients to make a bar of chocolate. 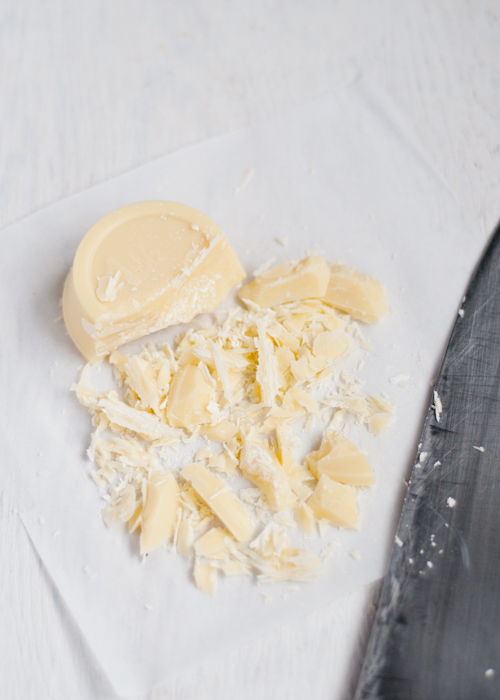 Cocoa butter is the fat that comes from cacao. It’s mixed with the chocolate liquor to make all the different types of chocolate. 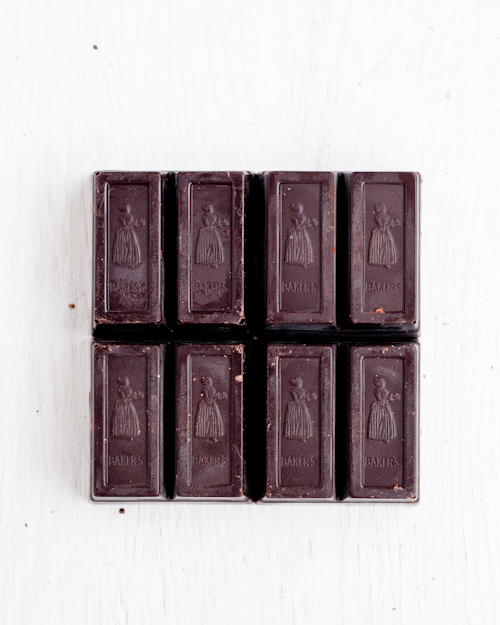 Unsweetened chocolate does not contain any sugar, but is made up of cocoa solids mixed with cocoa butter. It is used primarily for baking and cooking when we’re adding sugar and other ingredients to make cakes, cookies, and brownies. 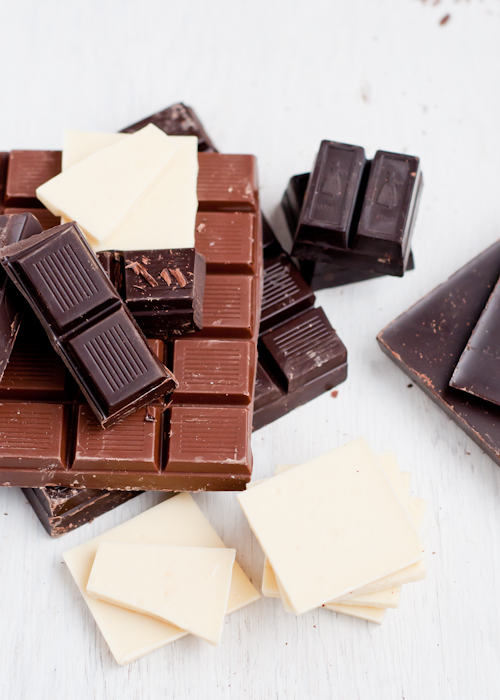 Did you know that white chocolate isn’t technically chocolate at all? It only contains the cocoa butter which has been mixed with milk, sugar, and vanilla. Secret Number Three: If you’re a hopelessly devoted fan of white chocolate, be sure to stay away from any white chocolate that contains palm kernal oil. It’s not true white chocolate and does not have the same taste or quality. 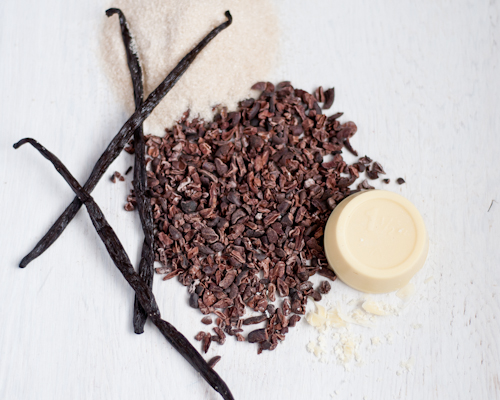 Now that we’ve covered the types of chocolate, let’s get down to business. We’ll start with our eyes. 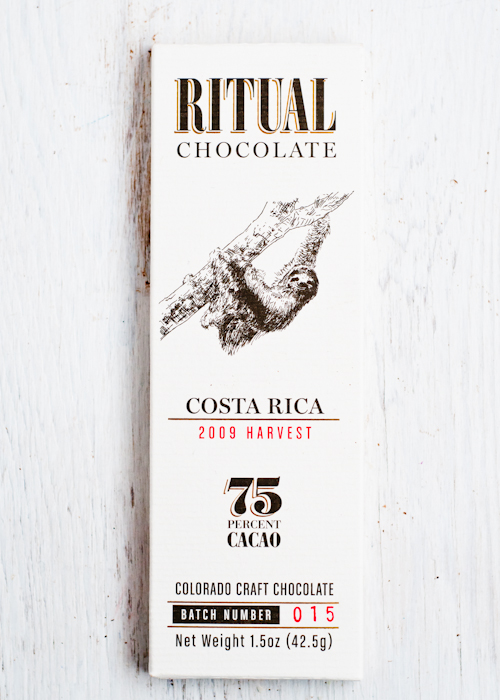 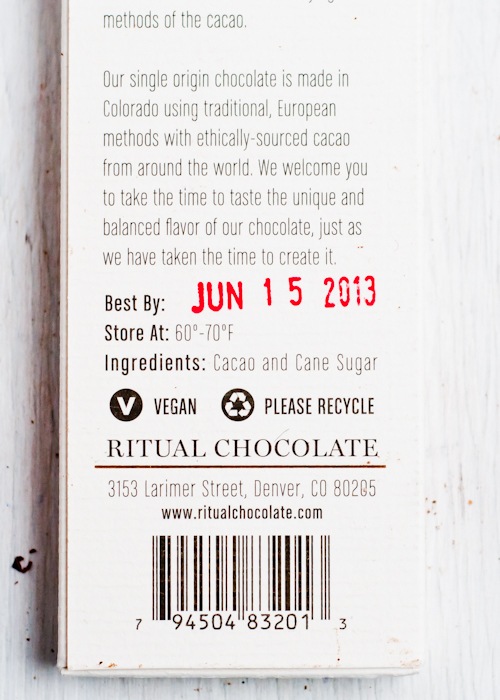 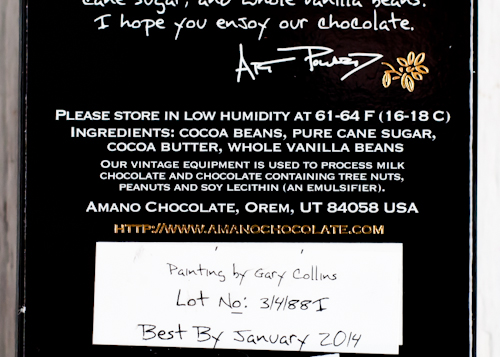 When selecting chocolate, look at the wrapper. It will tell you a wealth of information and help you decide which bar to choose. Secret Number Four: The less ingredients, the better! High quality chocolate contains five to six ingredients: cocoa solids/mass, cocoa butter, sugar, vanilla, and soy lecithin. If it’s milk or white chocolate, then milk will be on that list, too. The soy lecithin is an emulsifier. Not all chocolate contains soy lecithin, but it is very common. If it’s a flavor-infused bar, it should contain natural, pronounceable ingredients and contain no artificial flavoring: spices, chiles, herbs, coffee, etc. 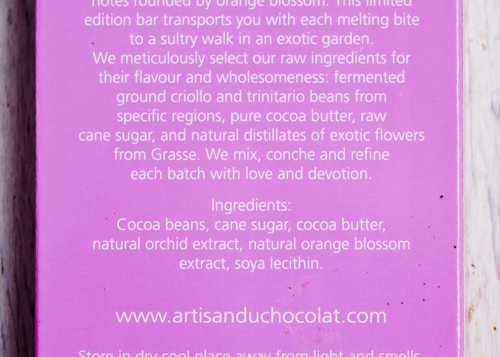 Other things to look for: where was the bar made, from where did the beans originate, whether it is a single origin bar (meaning, was only one variety of cacao used), and the percentage of cacao solids (the higher percentages make for a darker chocolate). 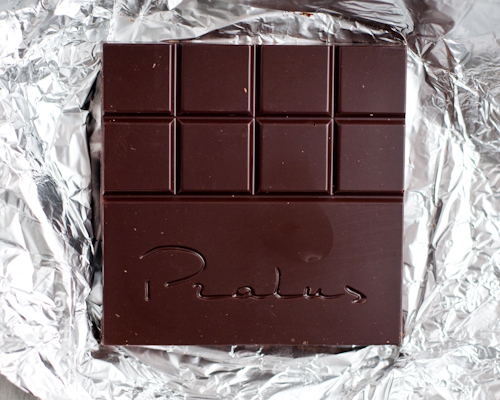 Once you open the wrapper, pay attention to the appearance of the chocolate. Artisan chocolates are beautiful. Their colors are rich, their finishes glossy, formed in varying shapes and thickness, and with some you may even notice slight reddish tint. The bars might look slightly different from one batch to the next as they are made in smaller batches by hand, not in big factories. Some are beautifully stamped with the company’s logo or other decorations. Some you’ll want to frame. I mean it. 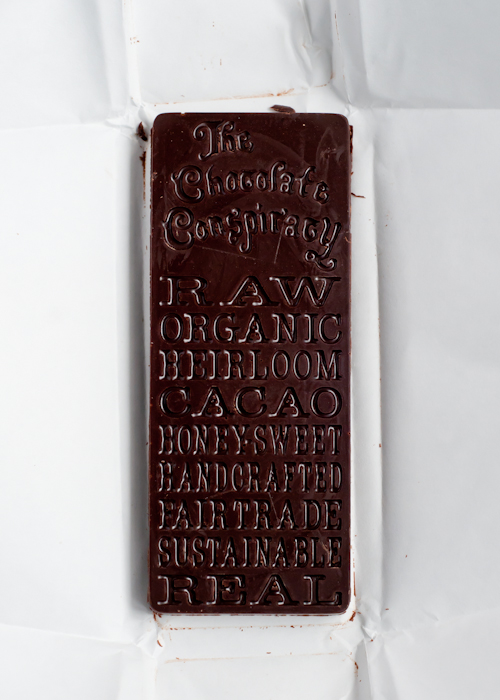 Secret Number Five: Looks matter. If the chocolate has white streaks on it, that means it wasn’t kept at the proper temperature or the chocolate wasn’t tempered properly. The white streaks are cocoa butter that has risen to the surface. It doesn’t mean the chocolate is bad or spoiled; it’s still perfectly fine to eat, though the texture may be slightly affected.

Mass produced chocolate is made in large batches, which means cocoa butter is often removed and replaced with vegetable fat, and artificial vanillin is used instead of vanilla. Other artificial ingredients are often added as well. So when you smell the chocolate made by artisans, you can really smell the difference. Secret Number Six: Your nose knows. Higher quality chocolate will smell sweet, like vanilla, or have floral components. It might smell like coffee, caramel, or fruit. It is full-bodied where the less expensive, grocery store chocolate smells artificial, or too sweet like marshmallows. 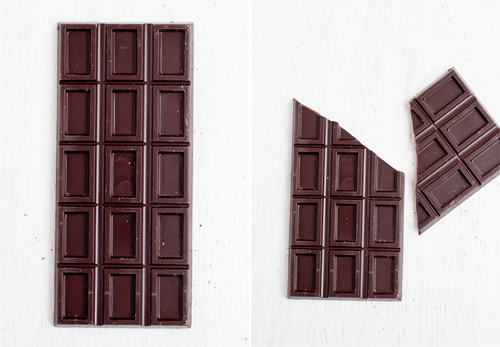 When you break chocolate, it should snap so crisply that you can hear it. This snap as well as the dark, shiny finish is thanks to a process called tempering. The short explanation is that tempering is bringing melted chocolate (in this case, during production) to a proper temperature so that the cocoa butter is evenly distributed and the crystals in the chocolate are properly formed. This crystallization is what causes the snap. It also makes the chocolate less likely to melt on your hands. 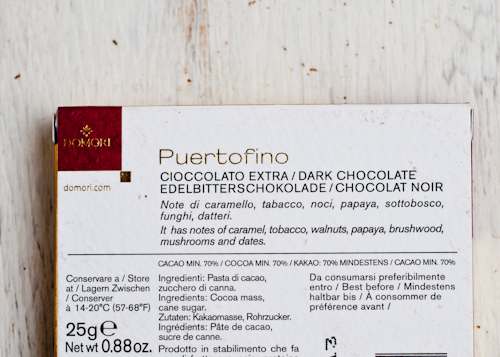 This is seriously the best part. You get to taste that piece of chocolate you’ve been studying. And you’ll be glad, once you’ve tasted, that you did your homework and chose the perfect piece.

Secret Number Seven: Take it slow. First, set the piece on your tongue. Instead of chewing it, let it snap between your teeth and melt on your tongue.

This is where we can talk about the distinct difference in single origin chocolate. Big candy companies buy loads of cocoa beans or cocoa solids and mix them all together for a consistent product that always tastes the same. Which is fine if you’re buying chocolate in bulk, or you’ve grown to love a certain candy bar from your youth and wouldn’t want it to taste any other way. But cacao beans grow all over the world in tropical climates. Some beans taste like banana. Others taste like berries or citrus fruit. One of my favorite bars from Amano, Morobe, tastes citrusy. 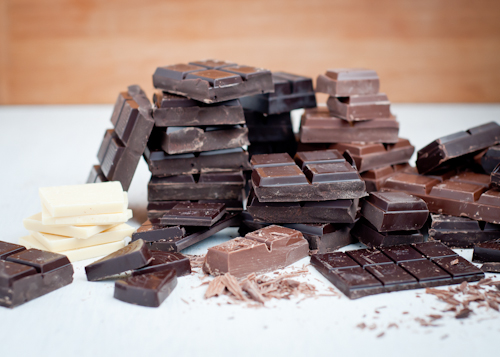 After the chocolate has melted, you’ll be able to detect what is known as the finish, which is very satisfying and lingers for a few minutes. Secret Number Eight: Fine chocolate actually is not as bitter as you’d think. In fact, a little bitterness is good. We are only able to really taste chocolate in the presence of sugar. 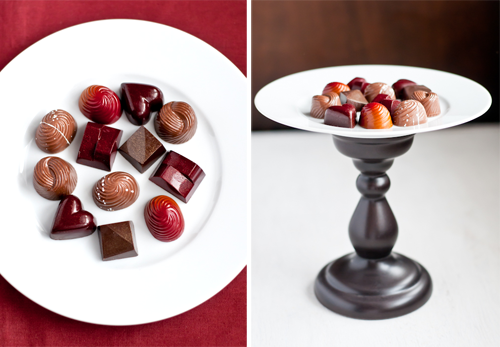 Because of the cocoa butter, which melts at body temperature, good chocolate won’t melt easily on your hands and will take a minute to melt on your tongue. It should be placed on the tongue, left sitting for a few seconds until it starts to melt. Good chocolate is creamy, smooth, and luxurious in the mouth. Inferior chocolates taste waxy or might even coat your mouth with fat. Domori chocolate is the creamiest I have ever encountered; the milk powder is ground right in with the cocoa beans leaving it as smooth as can be as it melts on your tongue.

Secret Number Nine:If you’re tasting multiple chocolates, begin with the one that contains the least amount of cocoa, from white to milk to dark. That way, your senses won’t be overwhelmed and you can ease into a true study of which tastes you love the most. Taste a single chocolate several times in small bits to get the full effect of the flavor of the chocolate. Also, in between chocolates, it’s possible to erase the previous taste to make way for the new by eating a small piece of white bread or something equally bland. Nothing spicy that will shift your senses into over-drive or compete with any flavors to follow.

Promise me you’ll pick up a high quality chocolate bar if you’ve never given them a chance before. It might even be fun to run your own taste test; industrial chocolate vs. fine chocolate. Be sure you taste them the same way — slowly and waiting until the final taste — because the finishes are drastically different! I imagine this is the kind of test you won’t mind taking. And remember: I want to hear what you love so I can try some, too!

P.S. — This infographic is a handy reference for all things fine chocolate!

You can find all the posts in the Secrets to Living Well series here.