If You’re a Gen-Xer, I Hope You See the Joshua Tree Tour 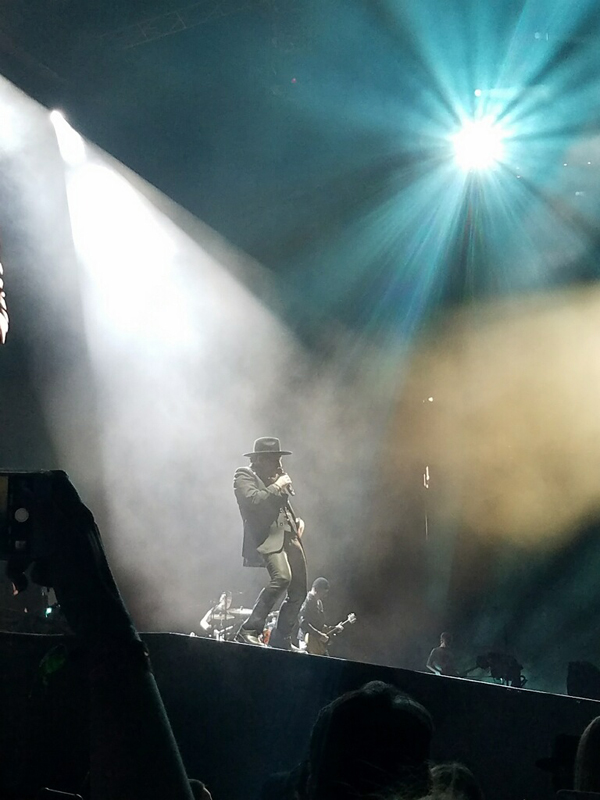 I want to tell you a little bit about our amazing trip to Houston — and encourage you to grab concert tickets if you’re a U2 fan. We were traveling with 2 other couples — Chris & Lisa Valentine Clark, and Weston & Emily Spencer. Ben Blair, Chris Clark and Weston Spencer have been best friends for over 30 years. And all 3 married within a few months of each other, so we’re all celebrating our 22nd anniversaries this year. As a couple, these are our oldest, dearest friends, but we don’t live near them and and we don’t get to see them often enough.

When U2’s Joshua Tree album tour was announced, Emily reached out with the idea of getting tickets as a group and attending the concert all together. She knew how meaningful the Joshua Tree album was to our husbands — it was the soundtrack of their youth — and this was the perfect excuse for a long overdue trip together. We originally wanted to go to the San Francisco concert — because then we could host everyone here in Oakland — but it happened to be the same night we had Hamilton tickets (that we had purchased way back in December — a total fluke!), so we decided to pick another location. 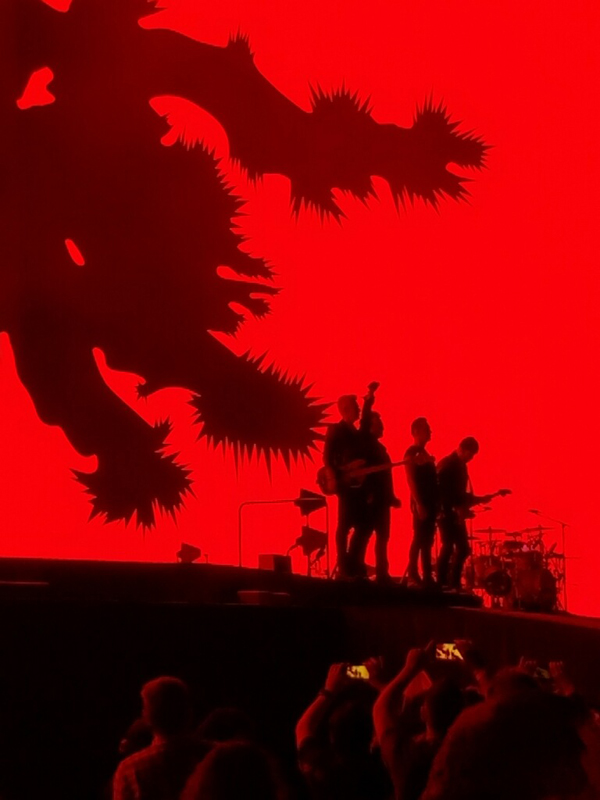 We looked at city options, decided on Houston, and bought our concert tickets. We traveled from California, and the 2 other couples traveled from Utah. It ended up being a good thing that we all traveled for the concert — it’s so hard to take a break from your responsibilities if you’re in your own town, and I know I would have been distracted if we had hosted for the San Francisco concert.

Anyway. The concert. I LOVED IT SO MUCH. It was a full-on love letter to America. The songs, the imagery, and every word that Bono spoke. I rotated through states of happy nostalgia, patriotism and pure delight. I couldn’t get enough. And I couldn’t believe how relevant all the music still is. It felt so now.

One thing I didn’t expect at all is that the concert would be so emotional for me. But oh my. The tears came over and over again throughout the night. There was something about the western landscape imagery — especially when they played Where The Streets Have No Name — that just gutted me. It’s the landscape I’ve spent most of my life in, and it was incredibly powerful to see it projected behind the band. 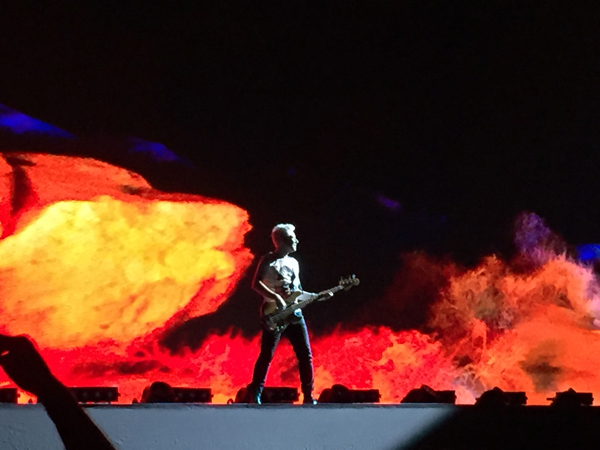 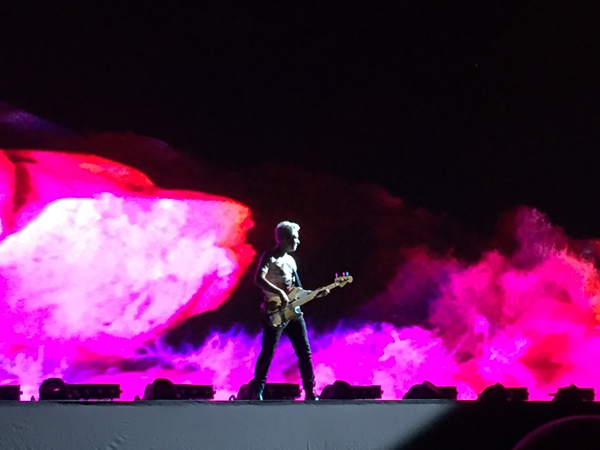 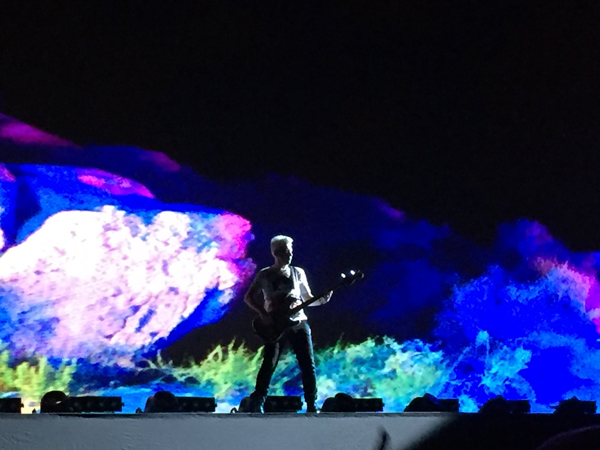 Another emotional part for me happened about 3 quarters of the way through the concert, when Bono took a few minutes to talk about ONE.org’s Poverty is Sexist campaign. While he talked, massive images of powerful female leaders from around the world were shown on the screen. I loved it so much!!! Bono shared some stats, and talked about the AIDS epidemic and the huge positive medical outcomes that have come thanks to our country, and especially thanks to the support of President George W. Bush when he was in office. The whole thing was so moving and so empowering. There’s really nothing better than seeing a rockstar who is an unapologetic feminist.

Related, you might enjoy this interview with Bono where he talks about the tour and about women being the future. A quote from the article:

“The third act was, “Can we go into the future and what would the future sound like and feel like?” Then somebody said, and it might have been me, the future is about women. I really believe that, so let’s make it an ode to women. As you know, feminine spirit is crucial at times when the male hegemony is causing mayhem. After the Second World War, people like John Lennon, Bob Dylan, Joni Mitchell, whoever … Marvin Gaye, say – that’s a feminine spirit. The 1960s was a feminine spirit, and the 1960s was born in the rubble of the Second World War.

Because of my work with ONE.org, I received wristbands that got us into the (RED)zone, which meant we could get very near the stage. Chris Clark was diagnosed with ALS a year ago and is in a wheelchair now; having closer access meant we had more flexible options for finding spots where he could get a great view. And of course, we all loved getting as close as we possibly could, so our wristbands were a huge bonus. (We were so close that I captured some epic footage of The Edge.)

It was interesting to look around and realize that most concert goers were in the 40+ range. For sure there were exceptions, but it was definitely a different age crowd than when we went to Beyoncé. It was beautiful to share these meaningful songs with my fellow Generation Xers. And I laughed so hard when Bono said, “Welcome to side two” as they played through the album in order. I could instantly picture turning my cassette over.

We didn’t want to do anything but hang out and just be together. We didn’t want it to end. It really was a super special trip, and I’m still feeling over the moon that we all made it happen. 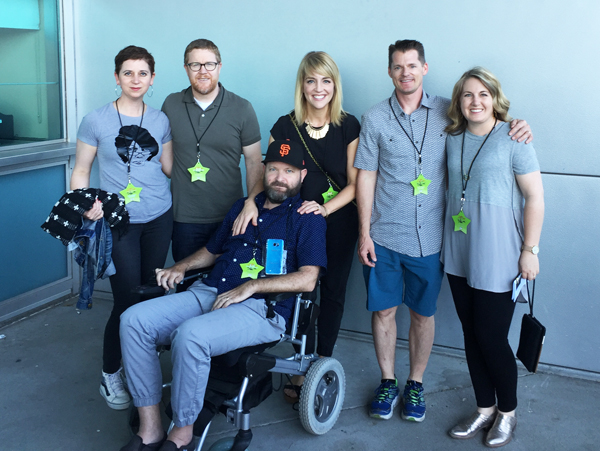 Your turn. Are you planning to see the Joshua Tree tour? Or maybe you’ve already been? Are you a U2 fan? If yes, did you listen to them as a kid, or discover them as a grown-up? And do you ever travel with other couples or families? I had such a good time — I want to schedule more multi-family trips with old friends!

P.S.S. — Some fun connections: Have you seen the viral Chatbooks commercial with the mom in the tub? The mom is Lisa Valentine Clark. And do you read Nie Nie Dialogues? Chris Clark is Stephanie’s brother.

36 Comments Share This Post
TwitterFacebookPin ItEmail Article
Previous Post « Living With Kids: Jessica Ries
Next Post I Made A Documentary Because of My Journey with My Daughter’s Mental Illnesses. What I Learned is Shocking. »