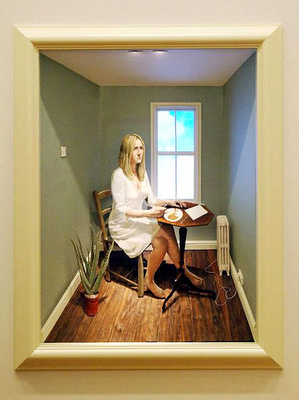 We just got home and I wanted to report while everything was still fresh. Be warned, spoilers ahead.

The reading itself was fantastic. She read the part of Book 7 where Ron returns to Harry and Hermione (part of the Silver Doe chapter). She was great. And the audience just ate it up.

I didn’t understand this until we were there, but the audience was made up of sweepstakes winners. I don’t know the contest details, but apparently this wasn’t an event you could buy tickets to. So the audience was made up of serious fans, which was perfect for this sort of thing. And they were here from all over the country. Georgia, Chicago, Hawaii, etc. Additionally, this specific reading was intended for an older audience. There weren’t as many kids there as you might guess.

After she reached the end of the chapter, it was time for questions. Some of the sweepstakes winners had been pre-picked and were prepared with really good questions. I only took notes on a few. And I’m going to paraphrase.

Q – Why the match-up between Molly and Bellatrix?
JKR’s A – Molly is a very powerful witch. Anyone that could raise Fred and George must be powerful. But sometimes that fact gets lost because her skills — like magical cooking, which is much harder than it looks, as I tried to show in the tent scenes — don’t draw much attention. But I wanted to make the point that just because a woman dedicates her life to her family, doesn’t mean she’s not highly skilled and talented and powerful. And I liked the idea if paring Bellatrix’s obsessive, disturbing love for Voldemort with Molly’s maternal love. The theme of maternal love, and how being loved gives you power, was important to me throughout the books.

Q – Did Dumbledore ever have a true love?
JKR’s A – Dumbledore is gay. He fell in love with Grindlewald, which sort-of blinded him to Grindlewald‘s true nature, and he was devastated and broken-hearted when he clearly saw what kind of person Grindlewald was. It was Dumbledore’s great tragedy.

Q – Does Neville marry?
JKR’s A – Yes. He marries Hannah Abbot. She becomes the next proprietor of the Leaky Cauldron. This makes Neville very popular among his students. They think it’s wonderful that he lives above a pub. (You remember from that he becomes the herbology teacher at Hogwarts.)

Q – Does Hagrid ever marry and have children?
JKR’s A – No. Sorry. Sorry. [Then while the audience voiced disappointment] I kept him alive. Come on!

Q – Would Snape’s portrait hang in the headmaster’s office at Hogwarts? And if yes, would Harry visit it?
JKR’s A – Technically no, because Snape sort of abdicated his office. But Harry would have insisted. So yes, Snape’s portrait would be there. And no, Harry would not visit it. Although Snape loved deeply and was brave — two qualities I very much admire — he was still a mean and vindictive person and he was not kind to Harry.

Other things I remember JKR said:
-The series is a prolonged argument for tolerance.
-Even though many people dislike the books for this reason, I think it’s healthy to question authority, and important to know that the government and press don’t always tell the whole truth.

Anyway. It was a wonderful evening. Carnegie Hall is beautiful. JK Rowling was delightful. Dessert afterward was delicious. And my kids got some unexpected sex ed.