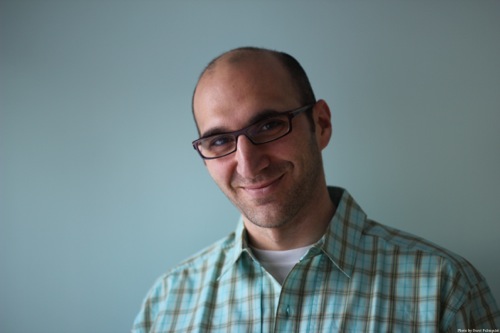 When I returned to the library this year, I did so in October – easily seven weeks into the school year. I had new-kid jitters, and felt the weight of welcoming students back to a library that had been dark for a bit. Of course, those kids changed all of that the second I met them, and we are in the process of building a vibrant community together. That notion that the space is ours, not just mine sent me searching for a keystone story for our new foundation. Aaron Becker’s Journey became that keystone, and I hope this glimpse into Journey and its brilliant creator is as thrilling for you as it has been for me and all of my new reader-friends.

1. What books grabbed you as a kid and never let you go?

All of Ed Emberley’s drawing books. They taught me that I could create the realms within my imagination with nothing but humble lines, squiggles, and circles.

2. Is there something about childhood that you try to capture in your work?

It may be a case of arrested development, but for me, it’s not a motivation to discover anything I might have once felt, but instead to express who I am now. The feelings of being a child are still very much alive and thriving inside me.

Just this morning, while playing Peter Pan to my daughter on our way to school, I heard the narrator say this: “It was then that Hook bit him. Not the pain of this but its unfairness was what dazed Peter. It made him quite helpless. He could only stare, horrified. Every child is affected thus the first time he is treated unfairly. All he thinks he has a right to when he comes to you to be yours is fairness. After you have been unfair to him he will love you again, but he will never afterwards be quite the same boy. No one ever gets over the first unfairness; no one except Peter.” As it is for Peter, this idea of always being surprised by unfairness is very much true for me. It’s what makes me an optimist and forever confused around jaded, cynical adults.

3. Who are your creative influences – in books, art, or any other media?

Growing up, like most boys born in the wake of the Apollo missions, I was into Legos and Star Wars. Not very original, but the creative play those toys and stories inspired seeps into everything I do. For instance, once I came out of art school and started drawing with more facility, I found it was very natural for me to draw architecture and characters from a three-quarters, removed perspective. I realized after a while that this was the same perspective used in Lego instructions! As Camus wrote “A man’s work is nothing but this slow trek to rediscover, through the detours of art, those one or two great images in whose presence his heart first opened.”

4. Do you remember the first thing you ever drew? (Or painted or sketched!)

Dueling spaceships. Each drawing or painting would end in a sea of red explosions and laser blasts.

5. If you could describe your studio in three words, what would they be? (You can leave out magical, because we can all assume that one!)

6. Where did this gal’s journey come from? Tell us a bit about the journey of Journey. (And I’m super curious if she has a name in your head?!)

To me, every story begins with a sense of place. I drew this huge, fanciful castle and found that it was begging for a tale. I had a vague idea of a girl moving through these exotic environments only to eventually return home. The bird came next. And finally, the boy. All of these characters eventually earned names, but that was mostly a function of trying to write out ideas for the entire trilogy once I knew I wanted a larger mythology and story for this world (yes, there will be three Journey books!). But I won’t reveal their names – it’s best to leave that up to each reader. The openness to interpretation is what makes the wordless format simultaneously risky and wonderful. Like the girl with her caged bird, I ultimately need to let my creation go and hope for the best.

7. Journey has been a profound experience for the readers I’ve shared it with. Can you separate yourself from it enough as it’s creator to let it move you as well?

What a fantastic question. I think what’s been most fascinating for me, actually, is hearing everyone’s interpretations of this story, that at the time, did not feel necessarily profound to me as its writer. To me, it was a simple story that came straight from the heart. But as people began to assign the characters and plot their own, personal significances, I realized I had created something far more meaningful than I ever intended. A rare gift, to be sure.

Next fall, we’ll journey back through the proverbial door. Actually, the artwork is done and I’m now working on the final chapter in the series. What a ride!

I shouldn’t be surprised that the creator of such an evocative and lovely book could fill my day with snippets of inspiration. I’m stuck on those comments about Peter Pan, and hope today is not a day I stumble around with jaded adult tendencies. And also parents, even though I’ve heard the painful and dangerous I-stepped-on-a-Lego stories, look what those Legos may become! And a trilogy?! I’m so thrilled.

Need more Journey? This trailer Aaron created will captivate every cell in your soul.