iCar: How to Make an iPod or iPhone Pinewood Derby Car 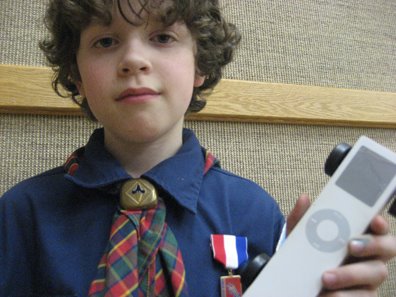 This was my son’s third and final year to build a car for the Pinewood Derby and as we started the project he said, “My car last year was pretty fast, and that was fun, but this year I just want to concentrate on making a cool car.” Well. All right then.

His idea: make it look like an iPod. So we did. And it was a hit! For any other Cub Scouts out there wanting to try the same idea, here are basic directions: 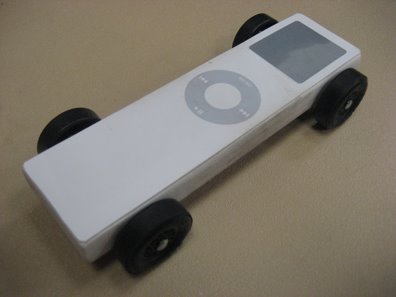 First, trim the block of wood

Start with a basic Pinewood Derby kit. Take the block of wood and trim off the longer end, so that the wheels are the same distance from the front and back. Then divide the thickness of the block of wood by half — you don’t want to go much thinner, because you still need to attach the wheels. (While you’ve got the tools out, you may want to hollow out a portion of the bottom of the block of wood so you can add weights.)

Second, sand the block of wood

Sand the trimmed block to smooth it and round the top edges so it feels like an iPod.

Give it two coats of glossy white or silver spray paint.

Fourth, print out an iPod surface

Create an iPod surface in Adobe Illustrator (or whatever drawing program you prefer) and print it on high gloss photo paper. You can also use one of four we created by downloading our PinewoodiPod.pdf. 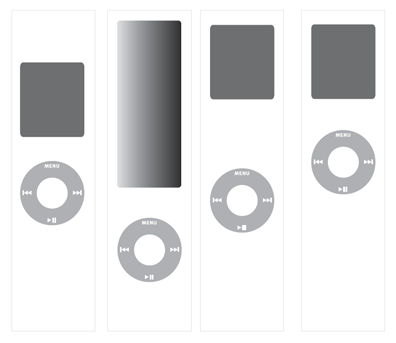 Fifth, mount the print out to the surface

Use an Exacto knife to trim out the iPod surface print out, and then use spray mount to attach the print out to the block of wood.

For extra reflection on the “screen” we used an old clear plastic report cover. We trimmed out a square of the plastic to match the size of the screen and also attached it with a very thin coat of spray mount.

Our son was super happy with it. And it was fun to hear the boys chanting iCar! iCar! iCar! during the races. 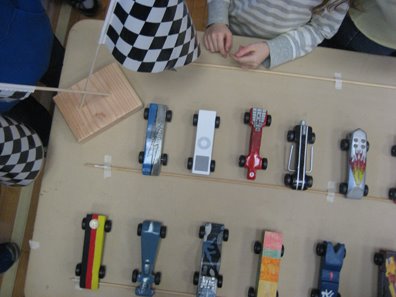