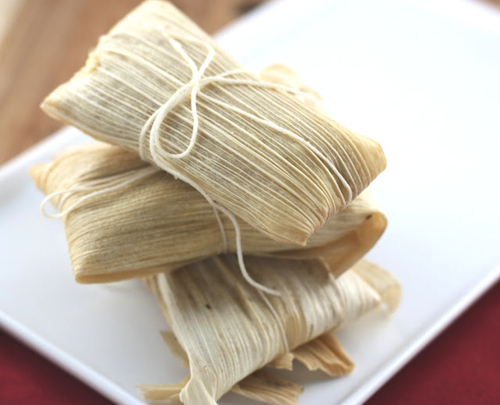 By Raleigh-Elizabeth. Pretty tamales from Fake Food Free, which features the delicious-sounding Jerk Style Country Ham and Pineapple Tamale recipe from Ham: An Obsession with the Hind Quarter.

Does your mouth water the minute you hear the word taco? Do you find yourself hunting down street fairs just to buy an arepa?* Does the word “masa” instill your heart with hope and your kitchen with potential? Do you go to Trader Joe’s just to buy tamales?**

I do. Guys, I really, really do. I go to Trader Joe’s to buy steamed pork buns I can microwave. I go to Trader Joe’s to buy lentils ready-to-eat in the produce section. I go for their chocolate covered mango coconut bites (which should be illegal), habanero lime tortillas, and cut-rate Port Salud cheese. But mostly, I go for their tamales. Delicious, magical, hot tamales.

Tamales, for the uninitiated, are like extremely delicious hot pockets made with masa flour or cornmeal. Now everyone who has ever eaten a tamale forgive me for the dumbed-down description, because a tamale is so much more than that. It’s a vehicle for consuming delicious foods in a yummy wrapper. It’s a reason to sit down to dinner. It’s an invitation to love food.

Tamales date back to at least 5,000 B.C. As the Aztecs, Mayans, and Incas took to the battlefield, they brought with them a number of women whose portable kitchens kept the warriors as well-fed as possible. Soon, everyone realized that while stew is delicious, it’s not exactly portable. Enter: the tamale. No one is sure exactly who first invented it, but what everyone knows is that as soon as there was the first tamale, everyone wanted one. Tamales came in all shapes and sizes, and every flavor possible. There were spicy meat tamales, sweet corn tamales. There were banana tamales and chocolate tamales, bean and cheese tamales, tamales with peppers. There were even tamales made with squash blossoms. I’m drooling.

And while tamales are native to South America, they have become standard fare in America. In the Mississippi delta, tamales are their own food group. Julia Reed, one of my favorite writers in general and devoted foodie, frequently waxes poetic about the tamales you can get in her native Greenville, Mississippi. Doe’s Eat Place, which was recently proclaimed an “American Classic” by the James Beard Association, sells them by the half dozen and, in Delta fashion, serves them boiled (not steamed) so that they become juicy, tender, and incredibly addictive.

Bought from a fancy restaurant, a street vendor, or even in the freezer section at Trader Joe’s, tamales are always addictive. I like mine with cheddar, beans, and chicken. Bill likes his made with sweet corn and filled with sweet peppers and cheese. What we both would like, without question, is more.

Tell me, y’all: Do you like tamales as much as we do? Have you ever tried making them? What’s the one food you just can’t get enough of?