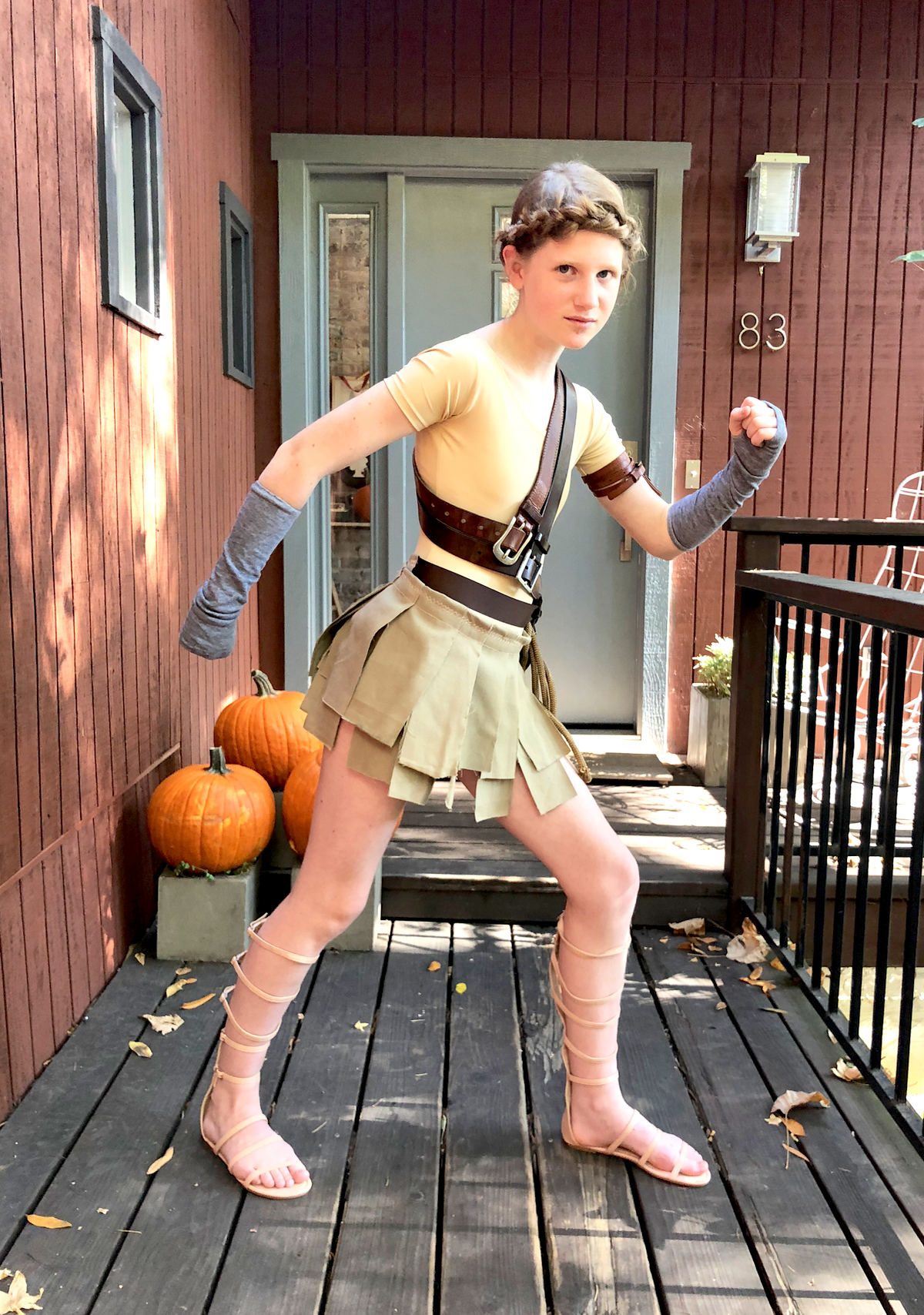 Here we go! Here’s a report of our 2018 Halloween Costume Ideas. I’m actually out of town today, and didn’t get to help the kids put on their costumes for school — June has a Halloween Parade today, and Oscar and Betty have a Halloween Dance after school. I won’t get to see them trick or treat either (sad face). But they wore their costumes on Saturday for Trunk-or-Treat, and (hooray!) I was able to capture a few photos then.

Our Halloween costume ideas this year hit that sweet spot where we’ve got homemade elements and store-bought details. I love those kind of costumes because we get to be creative, but it also takes pressure off me as the costume maker. 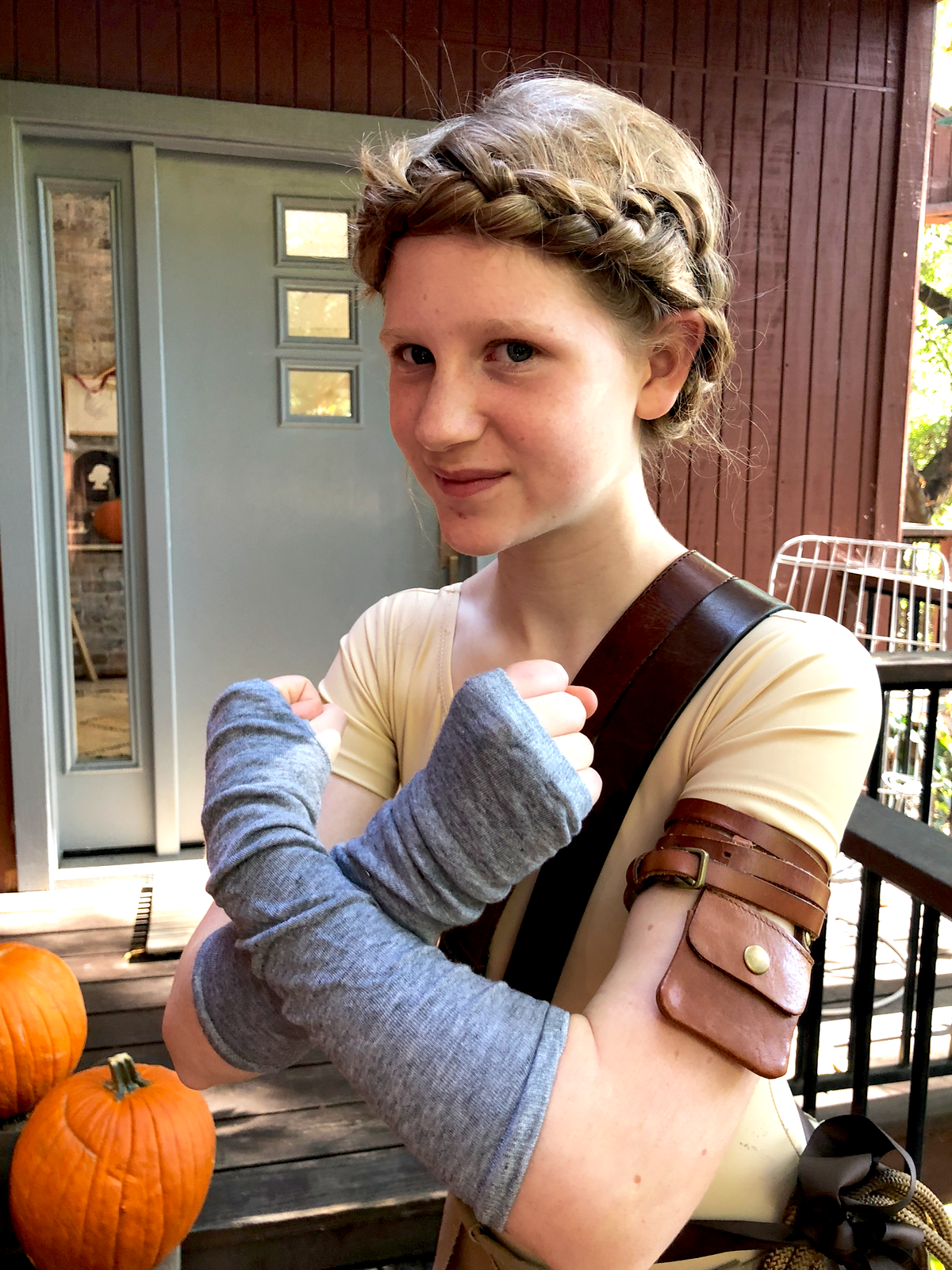 First up is Betty as Wonder-Woman-In-Training. If you saw the movie, this costume tries to capture the look of Diane Prince on the island of Themyscira before she dons her uniform for the first time. 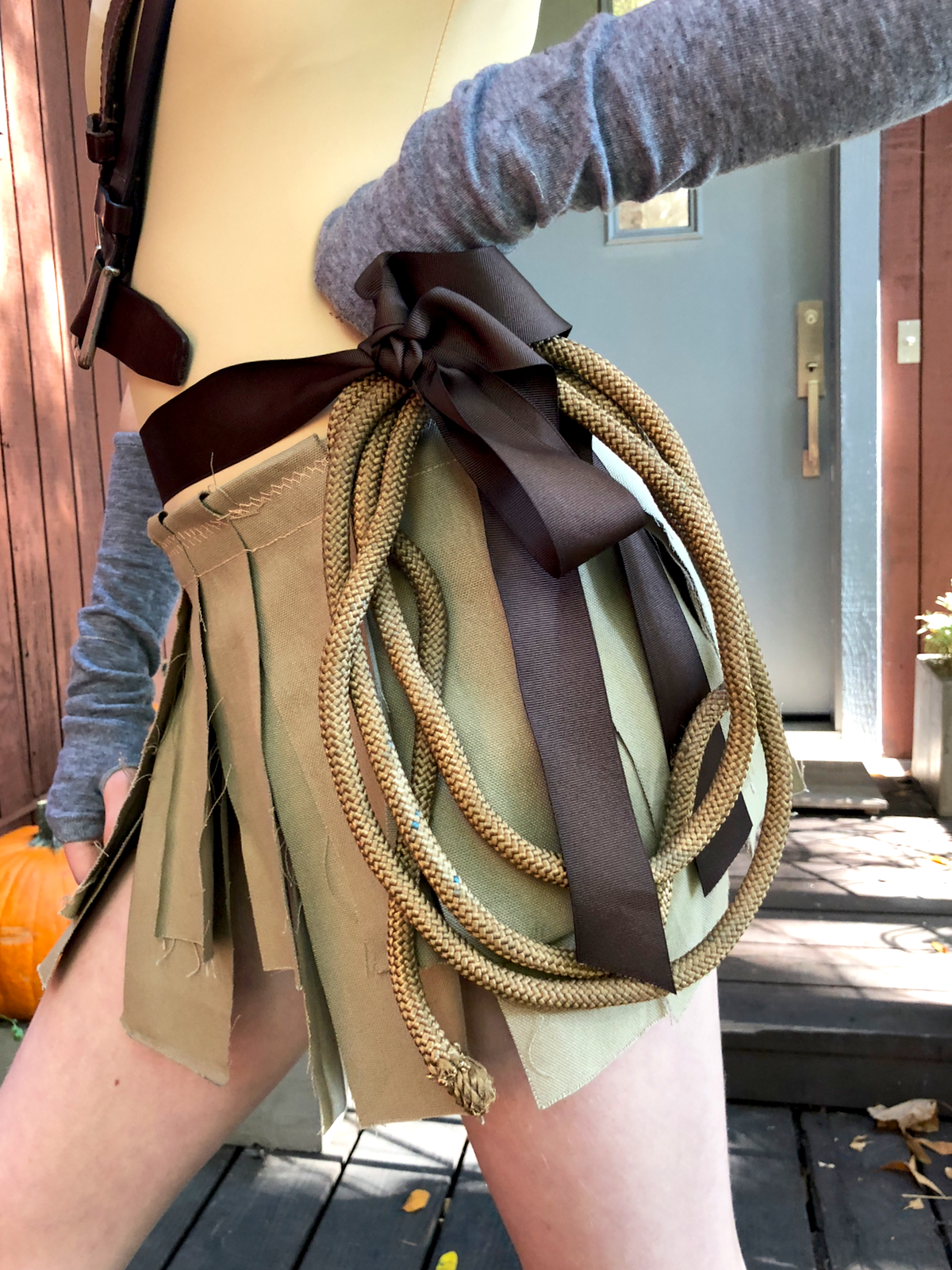 We started with a leotard. We sewed a skirt made from strips of fabric on a wide, brown ribbon. The skirt wraps and ties in a bow. We painted a length of rope gold (though it didn’t turn out looking metallic?), and attached it to the skirt before the bow was tied.

We added two leather belts (one is mine, one is Ben Blair’s) over the leotard, and a little leather belt that we wrapped on her upper arm.

We ordered some inexpensive sandals, and grey arm warmers to finish things off. And big sister Maude came home from college (she’s across town in Berkeley), to do the crown braid. 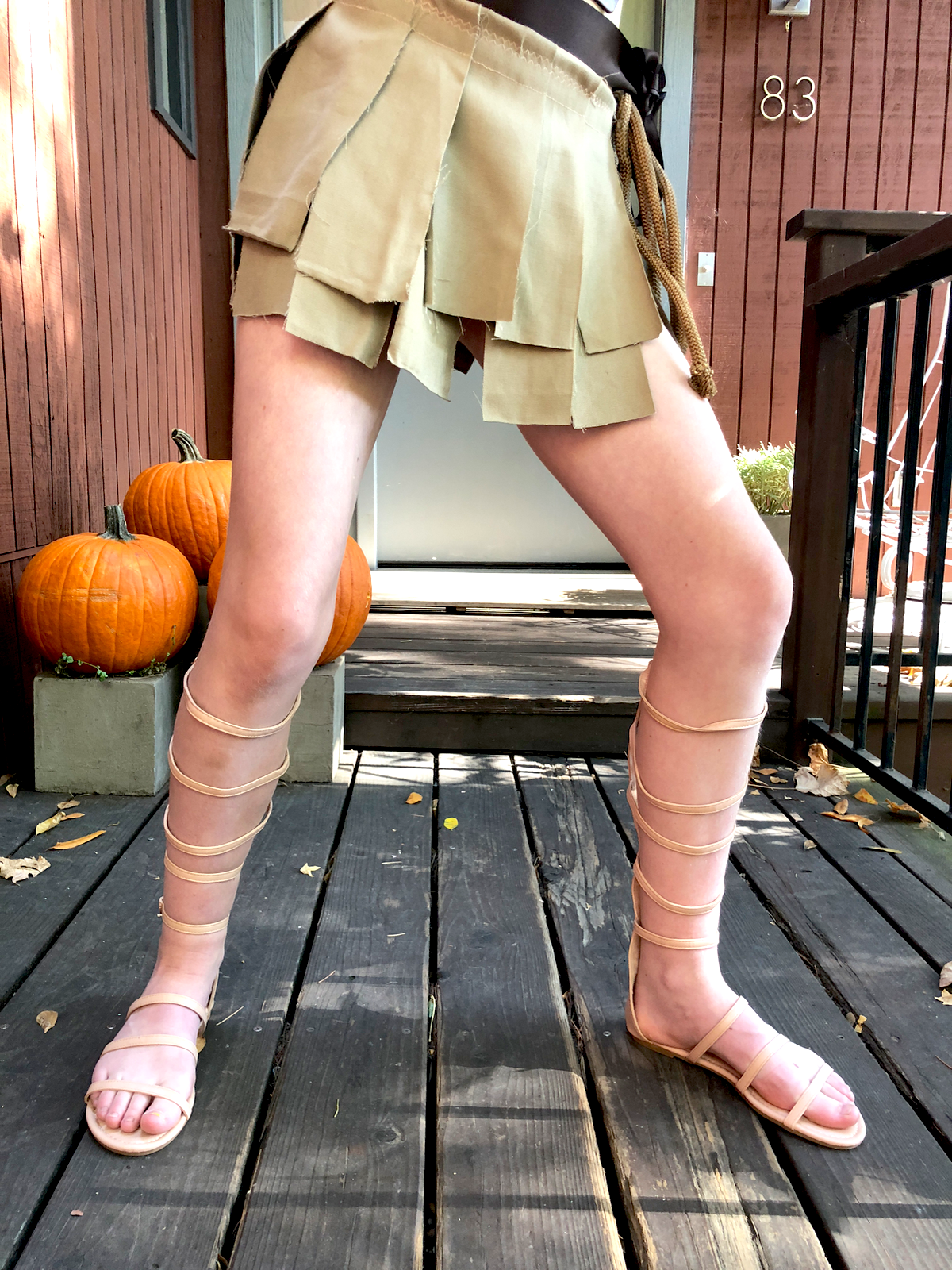 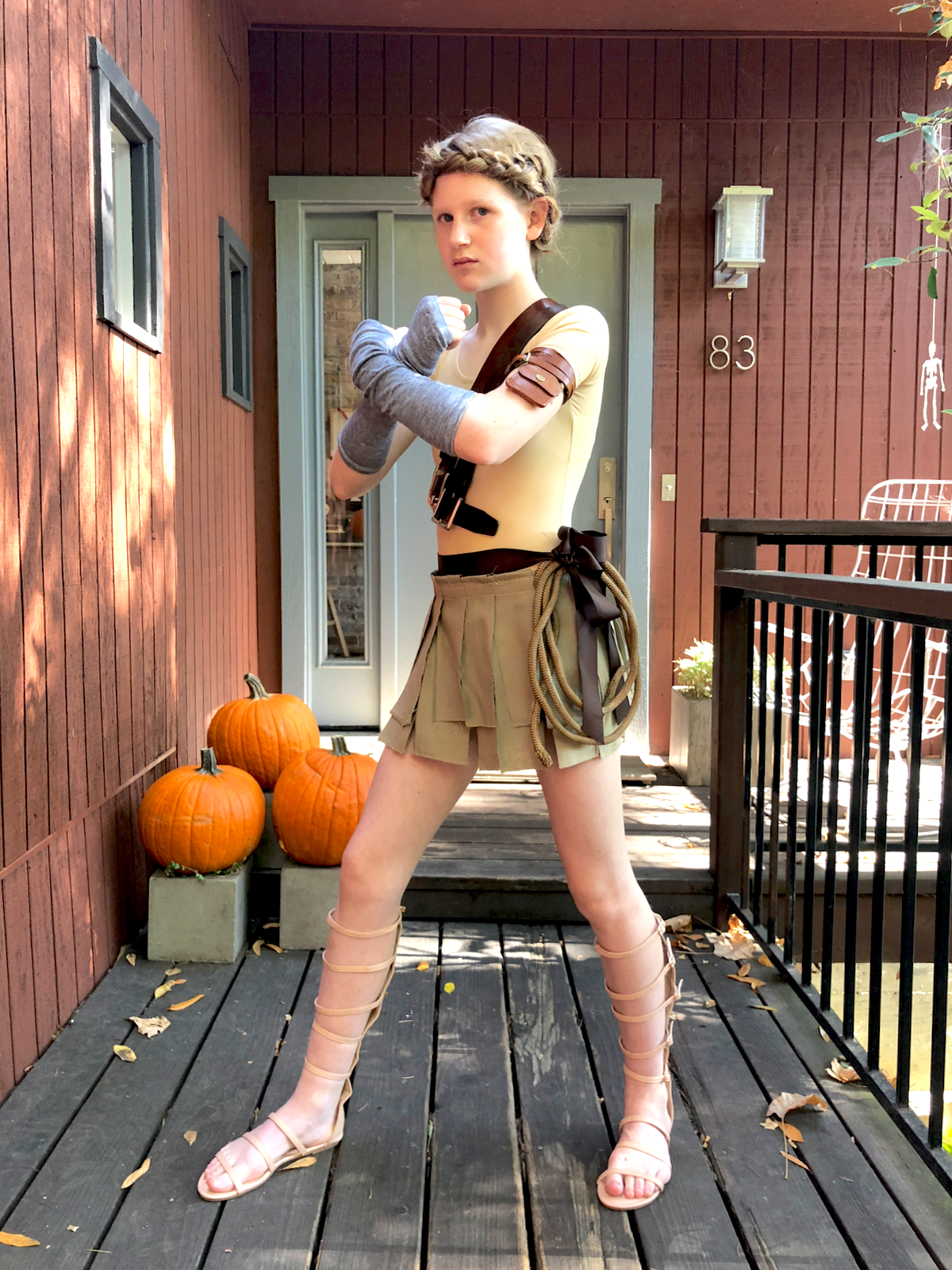 Betty looks fantastic! And she’s so pleased with how this turned out. She practiced lots of power stances for the photos. 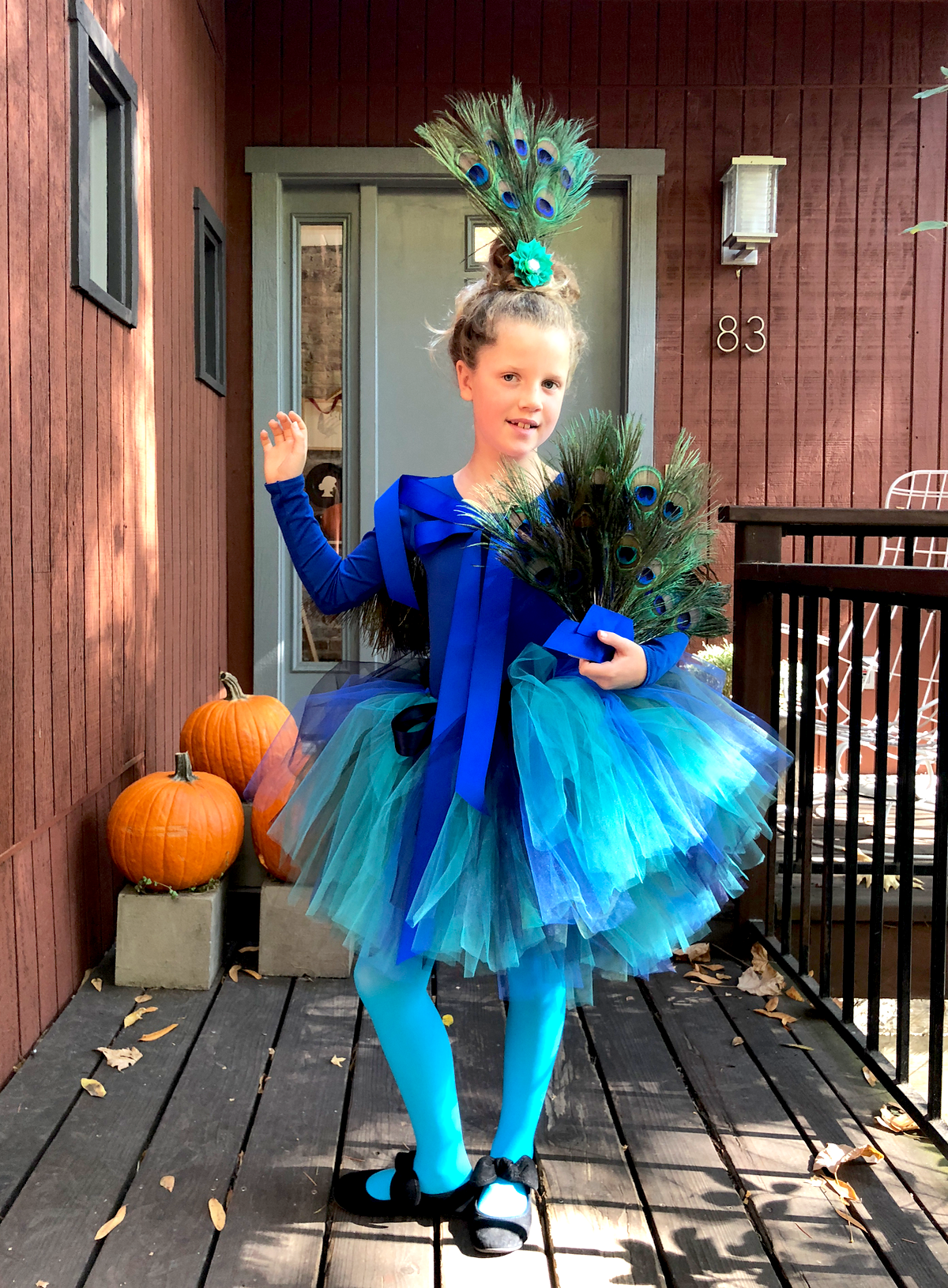 Next up is June as a peacock. I’m not sure where she got the idea of being a peacock, but she was very excited about it.

We started with a long-sleeve blue leotard we already had (she wore it as a mermaid too). Then, I ordered an inexpensive tutu, colorful tights, and a packet of 50 peacock feathers (a group of 50 costs about $11). 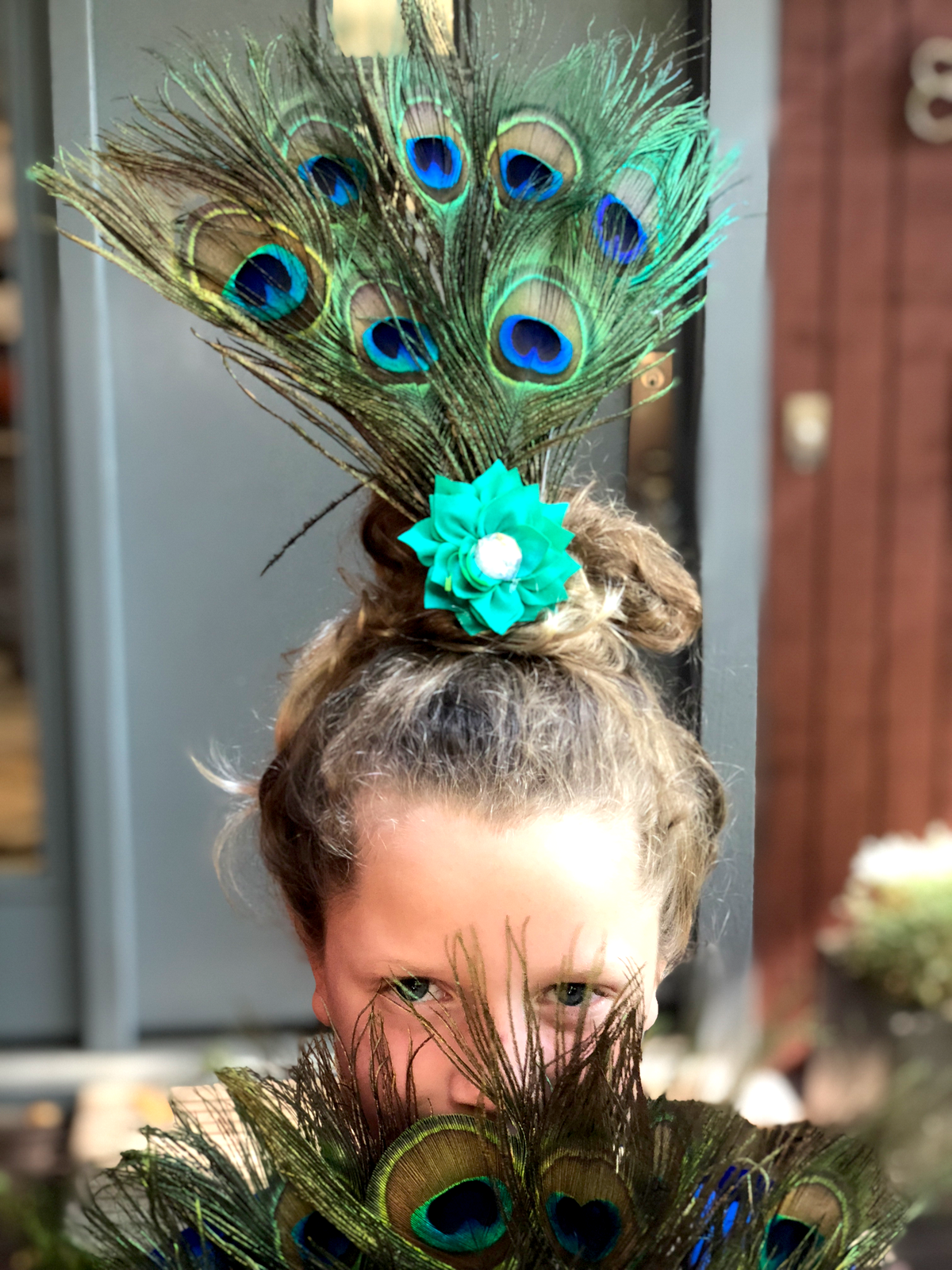 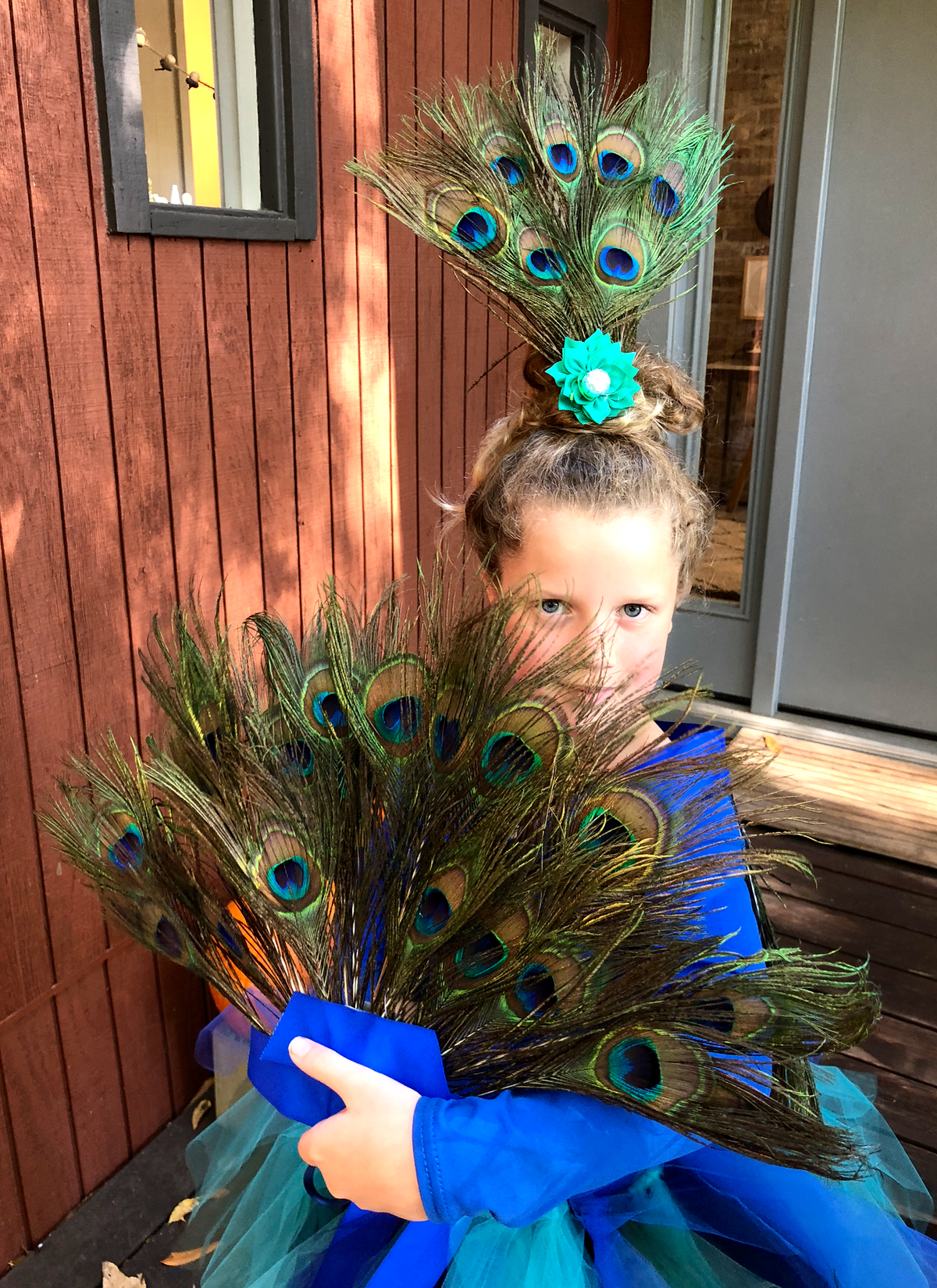 We used the feathers to make a headpiece, a fan, and tail feathers that we could wrap around her waist over the tutu. There was a lot of felt, ribbon, and hot glue involved. : )

The headpiece and fan worked out great, but the tail feathers sat awkwardly on the tutu. So instead we put them on her shoulders like a wrap or cape. 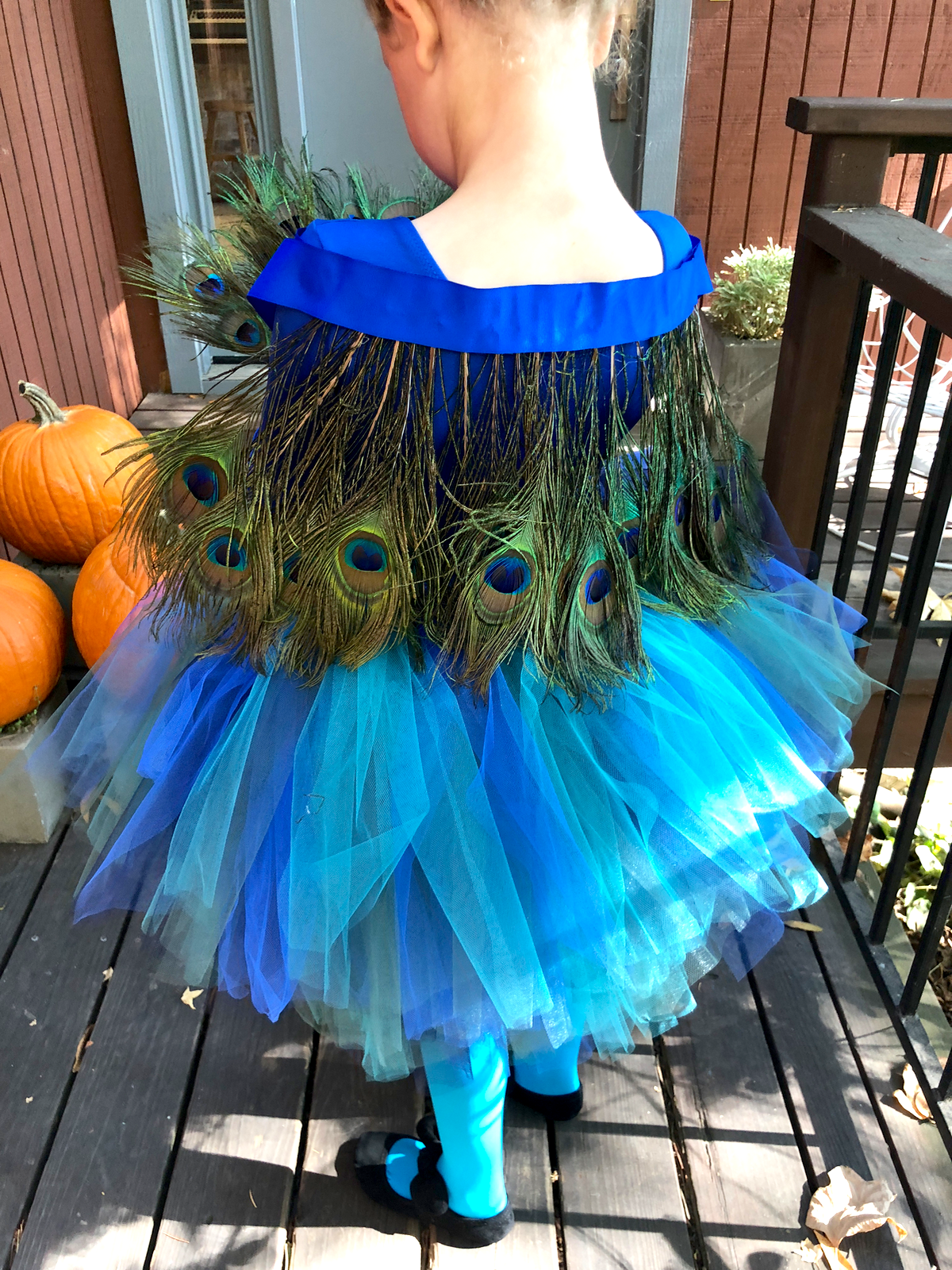 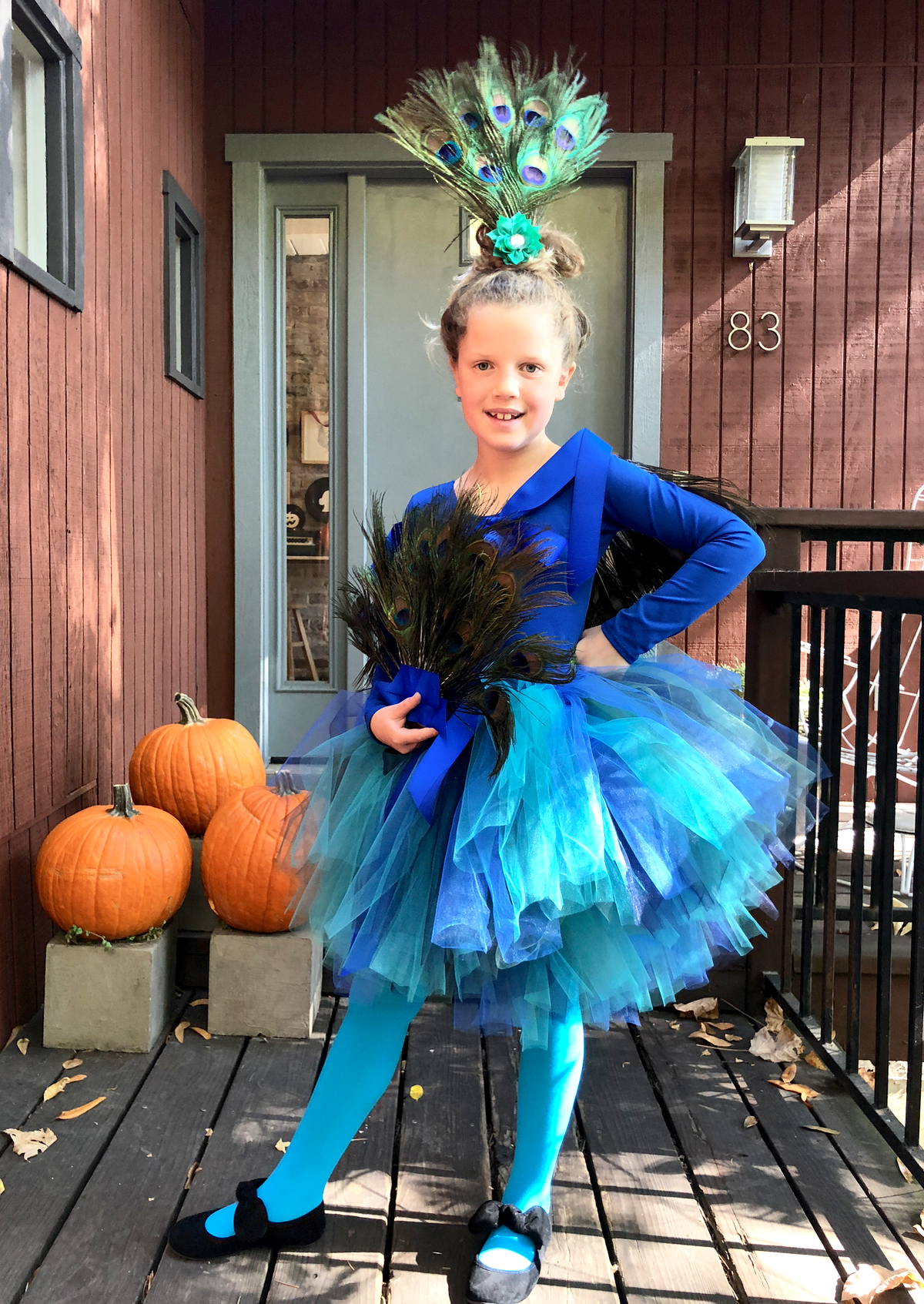 She looks and feels fabulous in her peacock get up and we were both delighted with how things turned out. 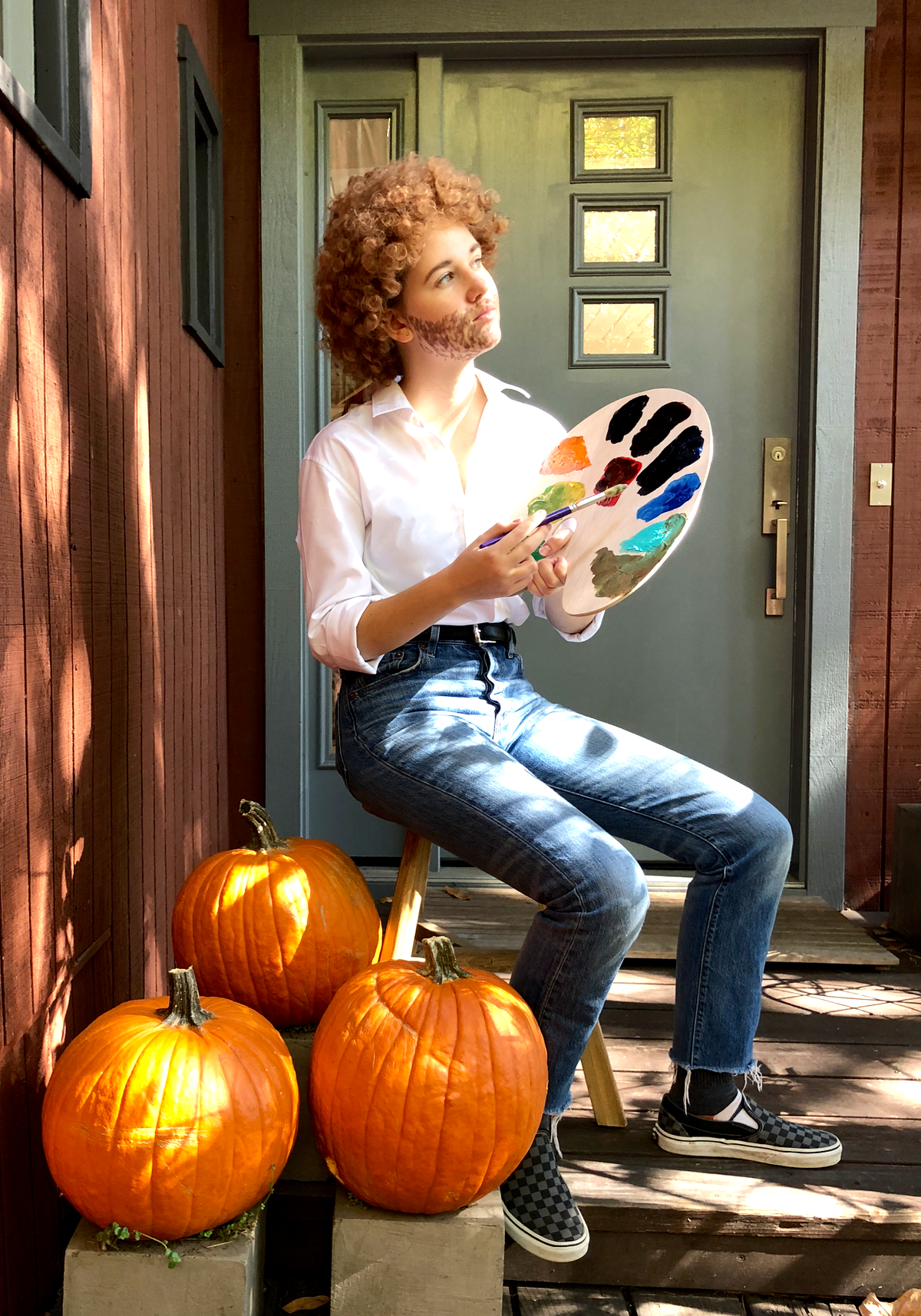 That brings us to Olive as Bob Ross the painter. Do you remember Boss Ross’ Joy of Painting show on TV? He’s so calm and gentle.

Olive had this wig from her Napoleon Dynamite costume last year, and she had been thinking of ways to reuse it. Bob Ross was perfect! 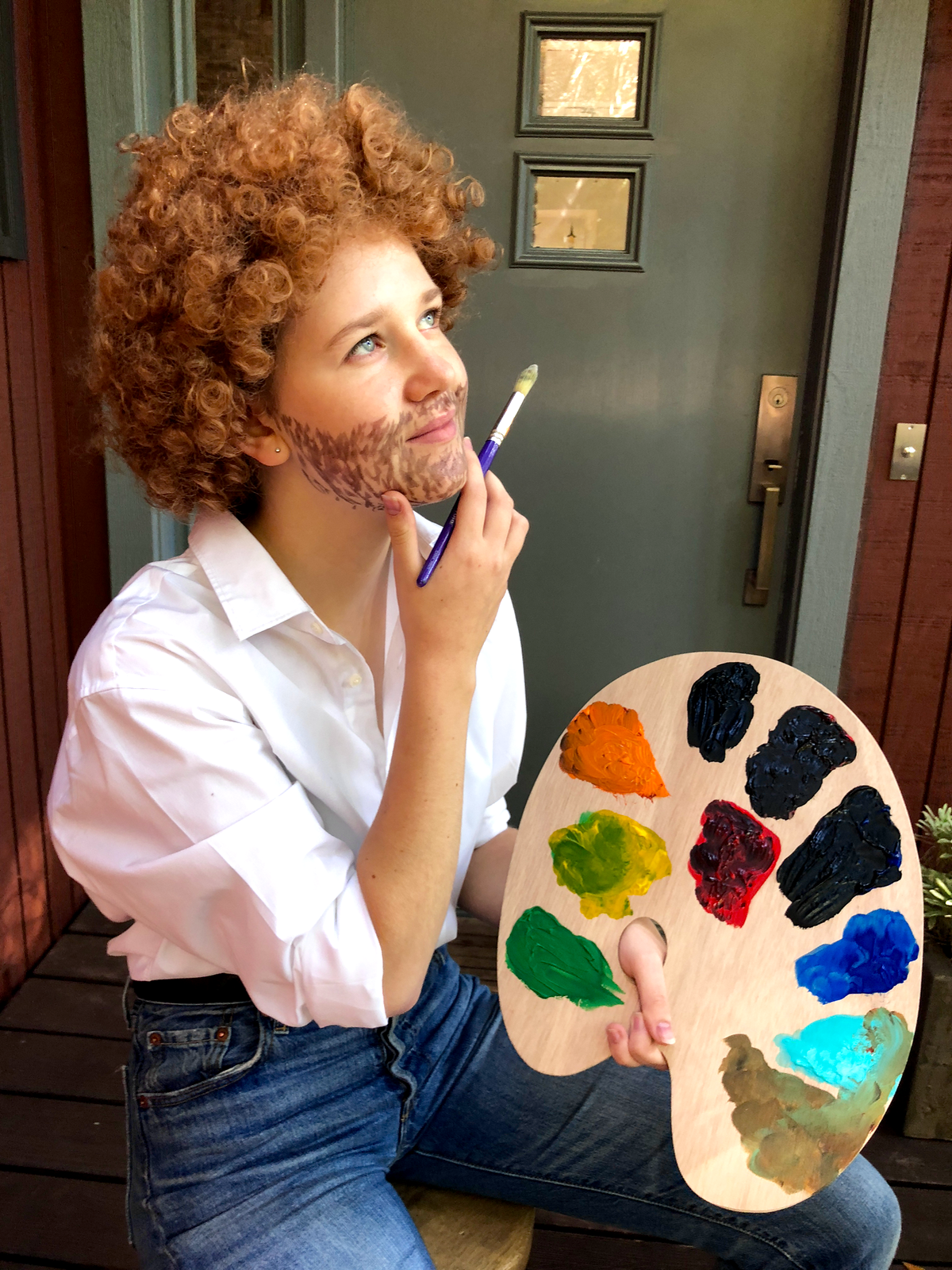 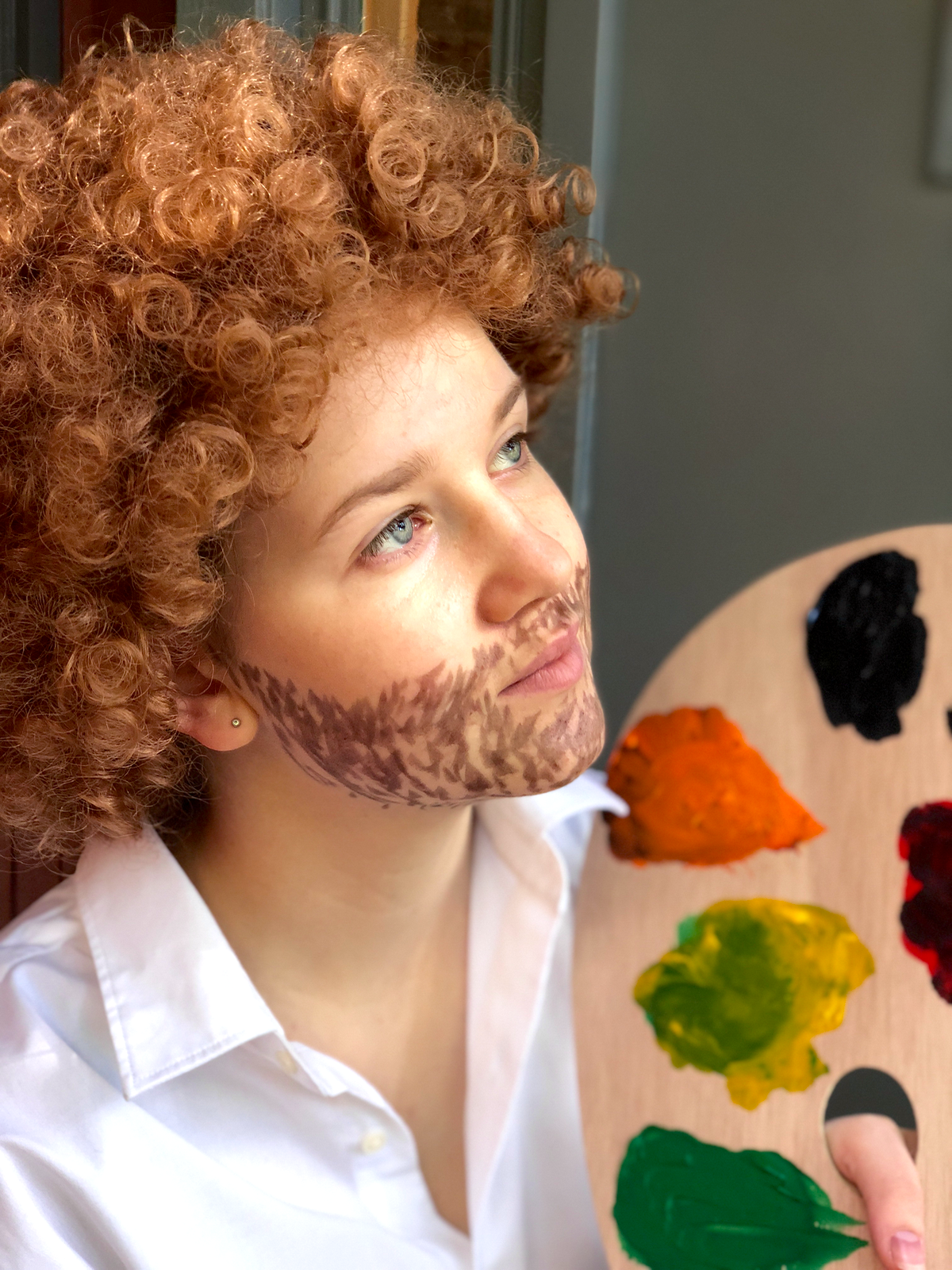 For this costume, she borrowed a button-down from Ralph, and wore her own jeans and belt. We ordered a basic wood palette and she added paint splotches and a brush from our stash, She drew on the beard with a non-toxic marker. 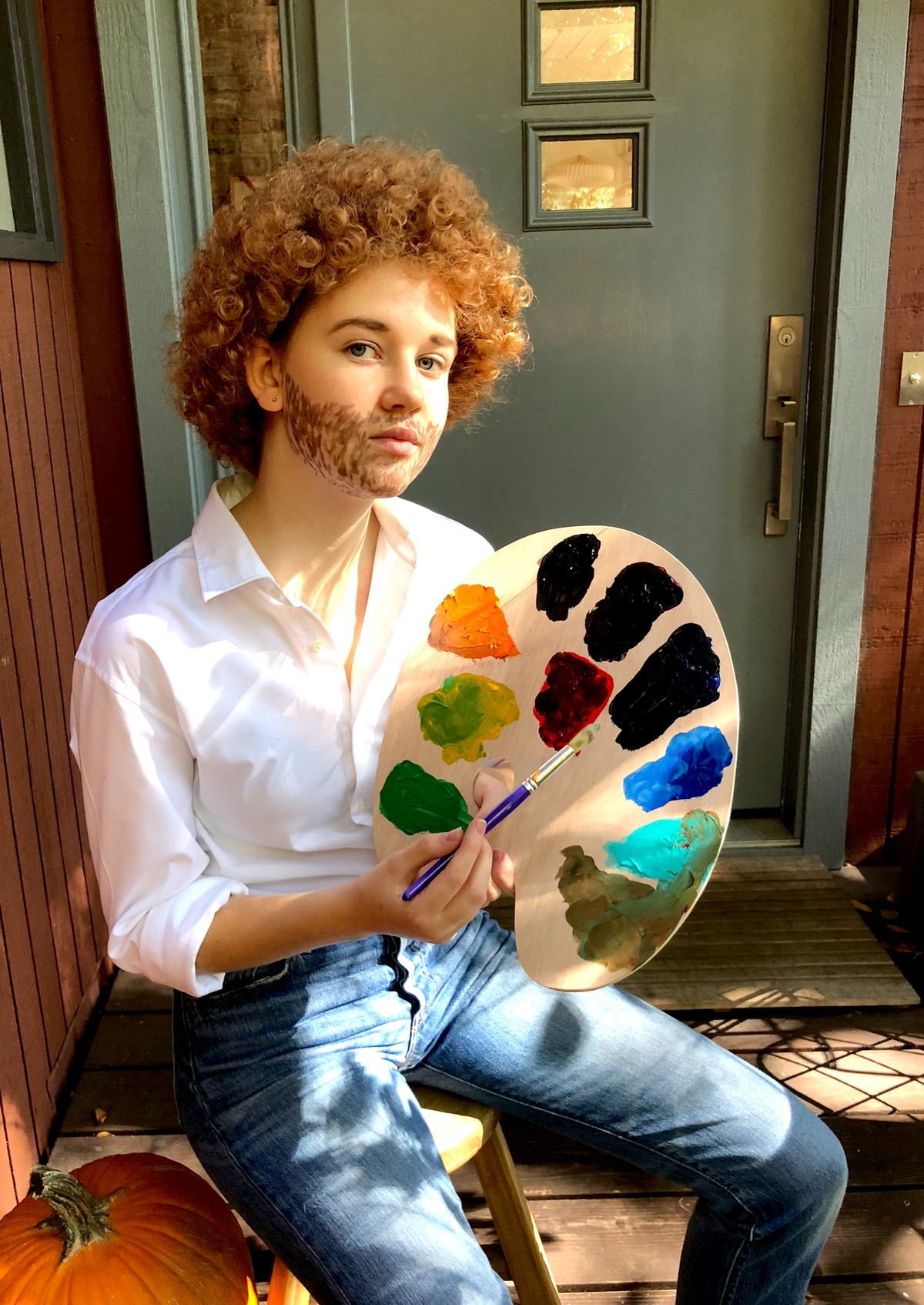 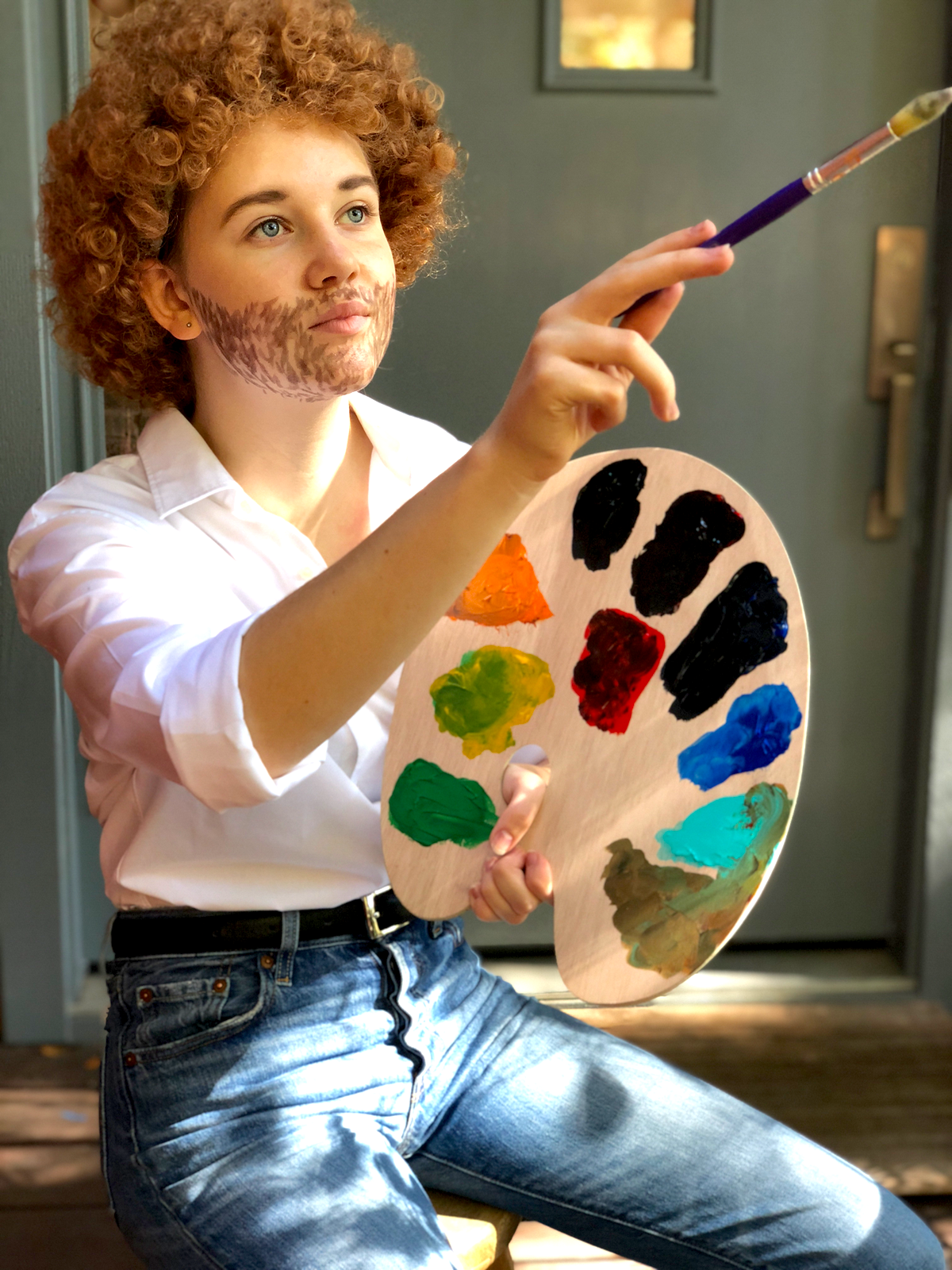 It’s a really fun costume — some people get it instantly, others have no idea who she is supposed to be. I love that she feels totally comfortable and doesn’t feel compelled to be the sexy version of whatever. 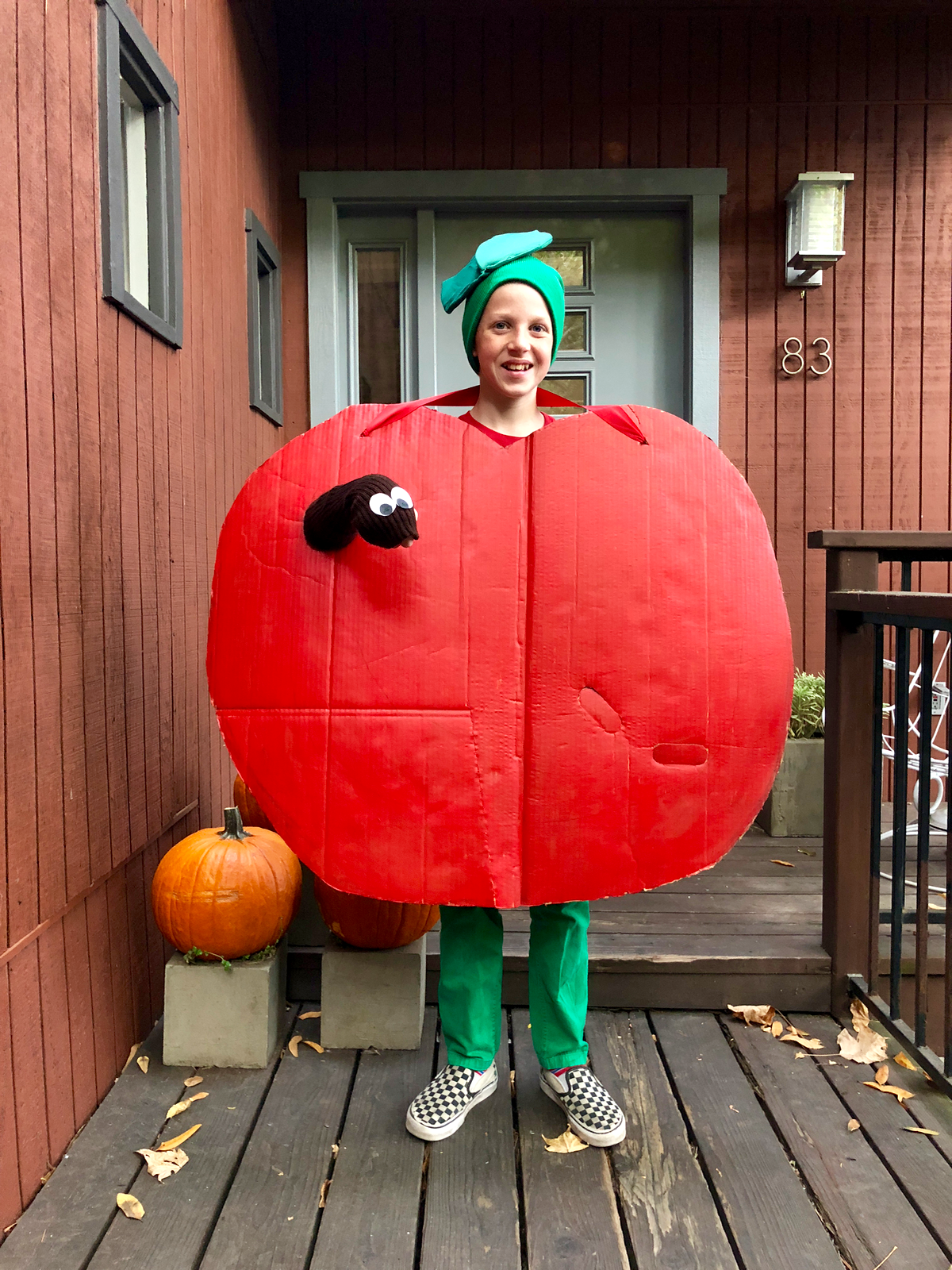 And finally, we have happy Oscar as a wormy apple. I’m not sure where he got this idea, but it’s very Oscar. ; ) 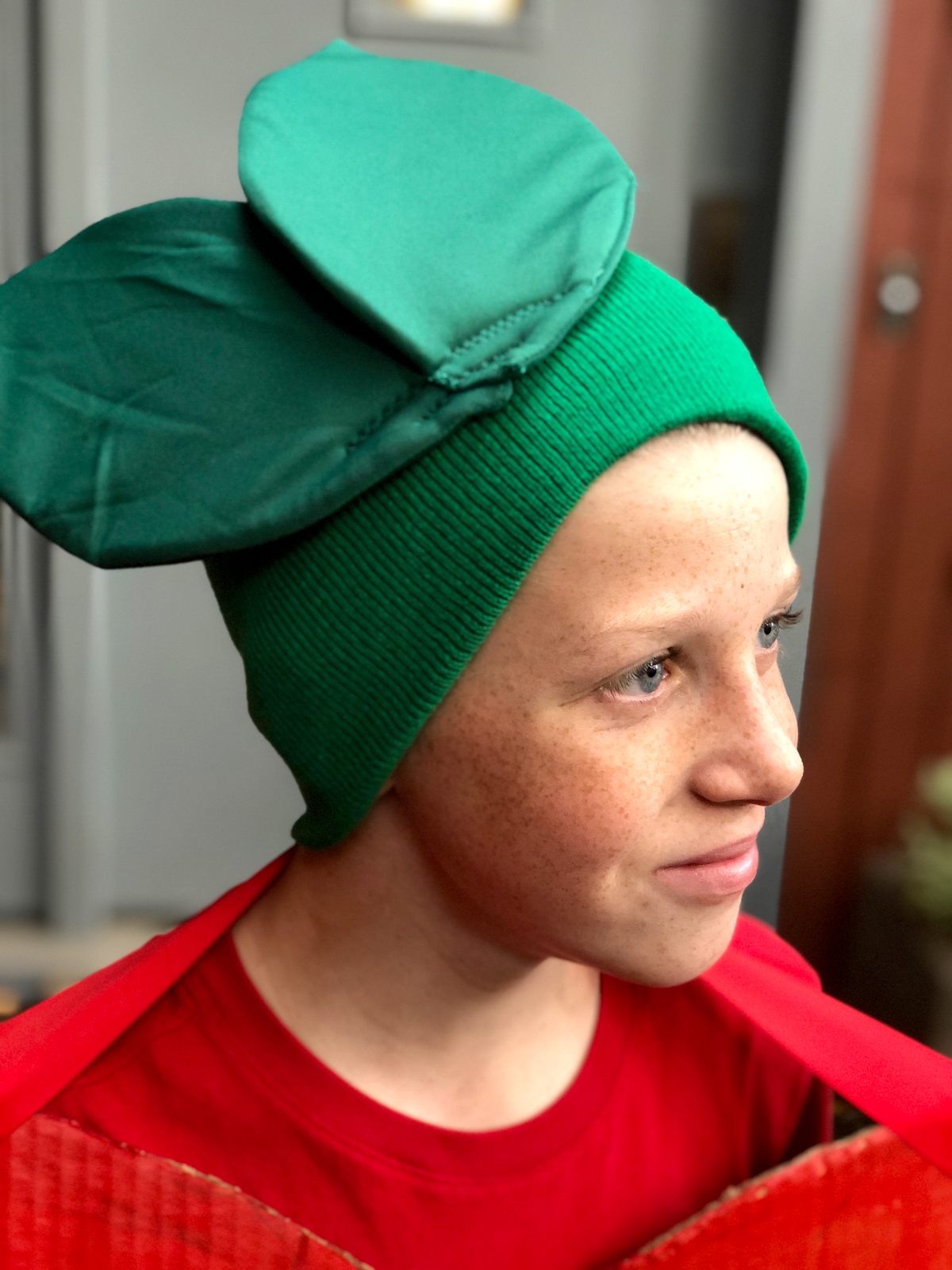 The hat is a basic green beanie, with leaves attached. The apple is painted cardboard, with red ribbon to tuck his head through, and a hole cut out where his arm can appear as the worm. 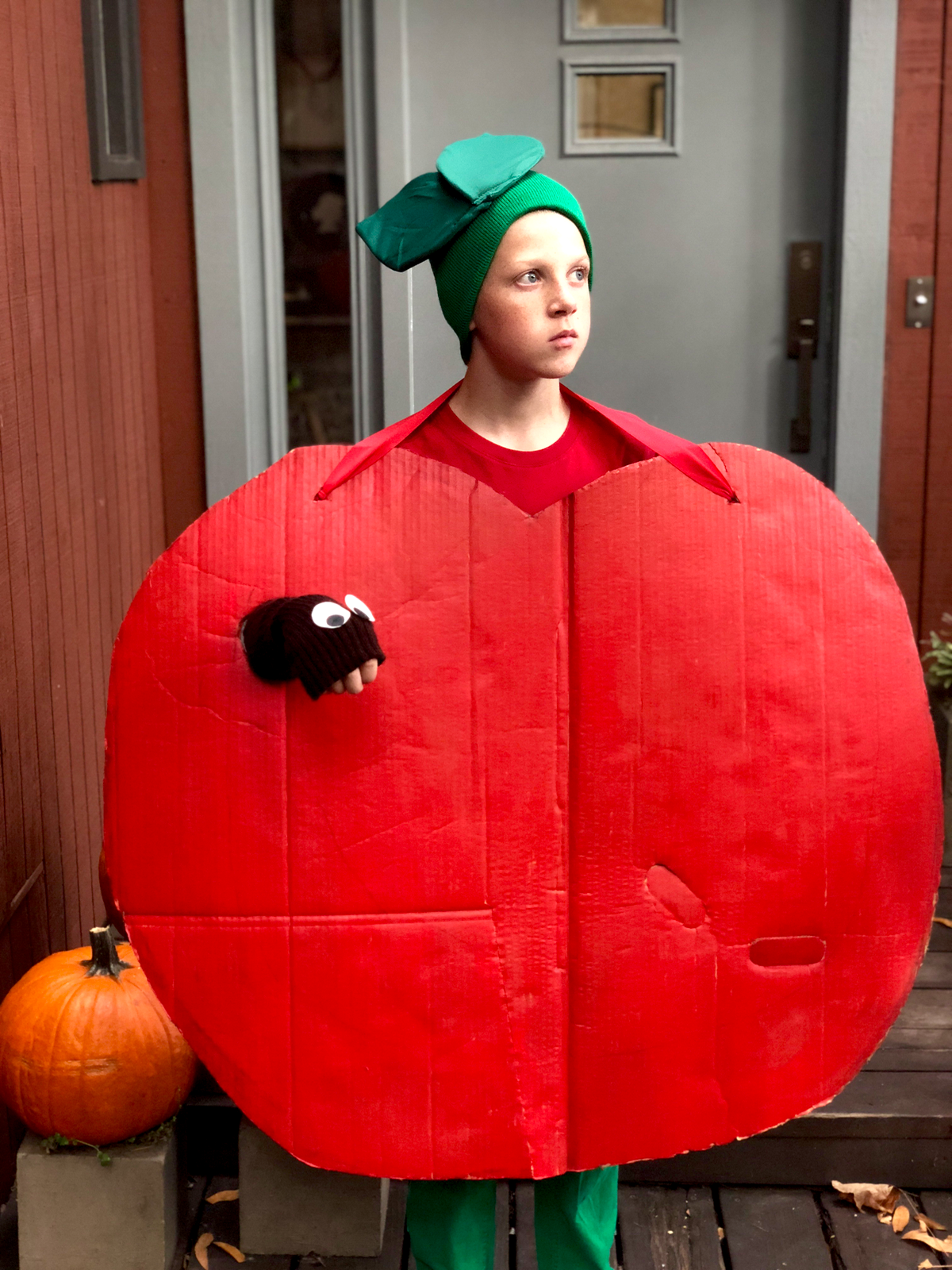 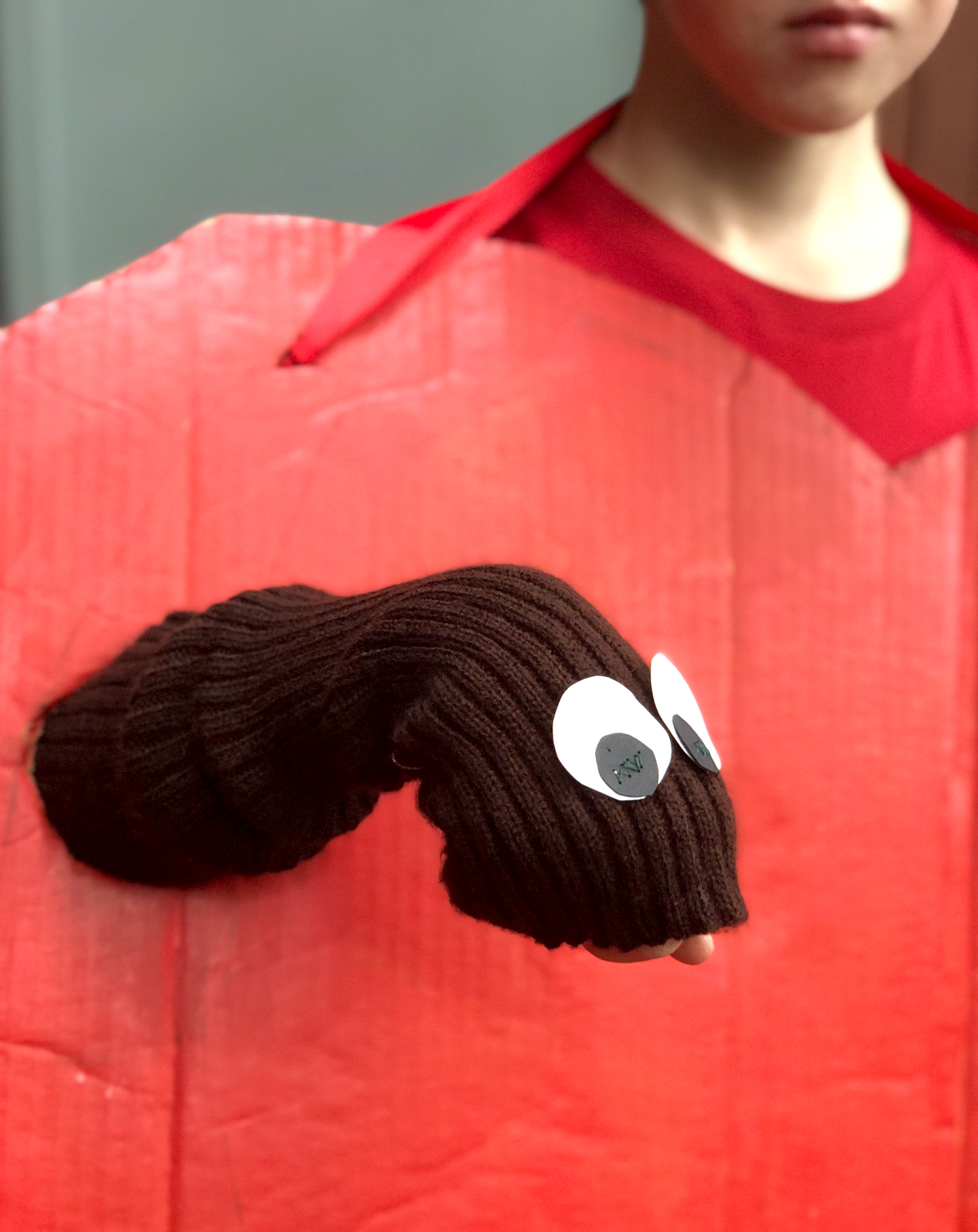 For the worm, we ordered arm warmers (though just used one). Oscar made googly-eyes from paper, and we attached them with a zig-zag stitch. The green jeans and red t-shirt were already in his closet. 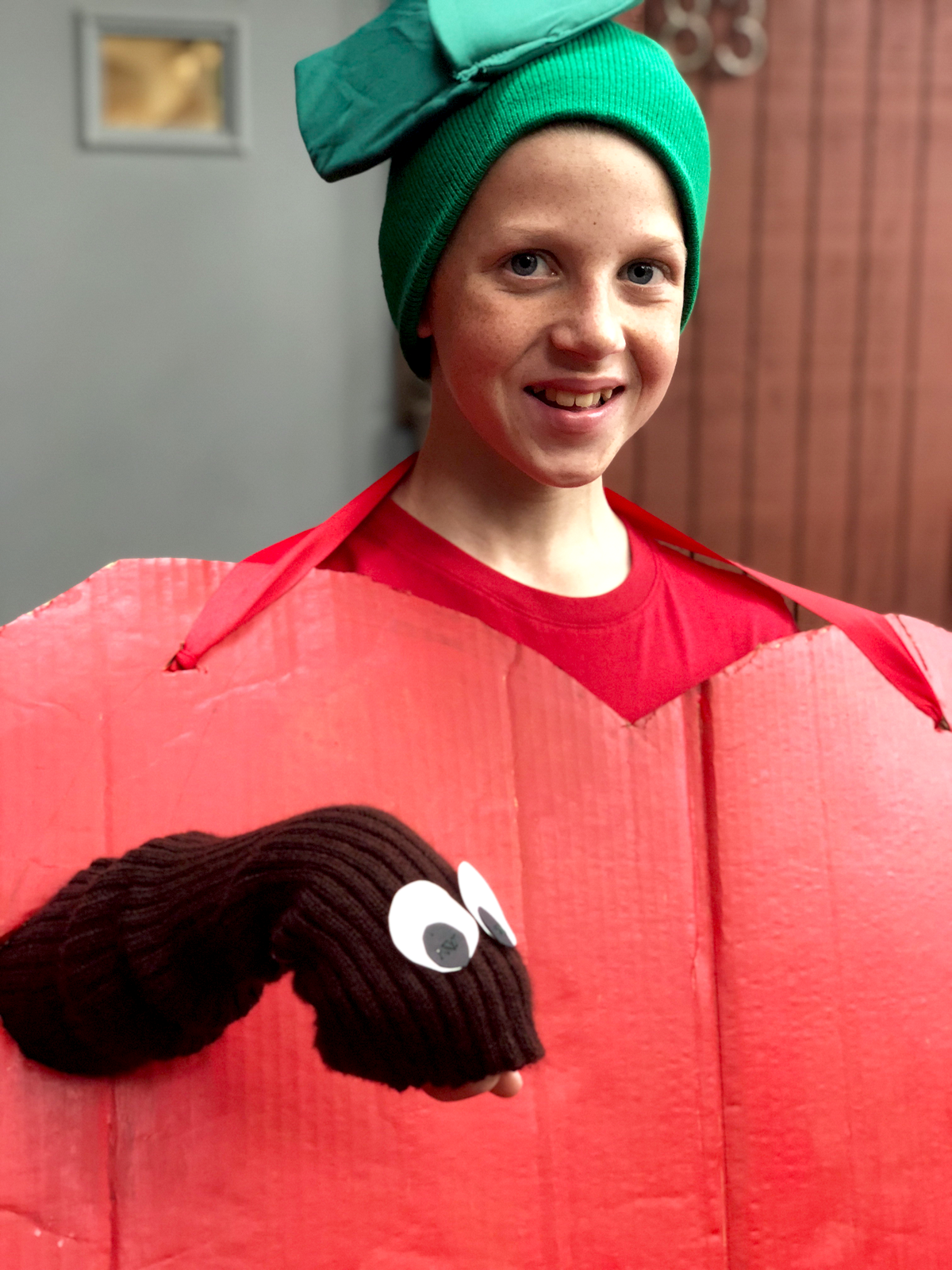 Fun fact: We originally went with a stuffed apple look, but Oscar hated it, and the stuffing kept falling out. So he switched to a 2-D cardboard concept about 45 mins before Trunk or Treat started. Everybody rallied to help and the new version turned out great!

Here’s a peek of the stuffed version if you’d like to see: 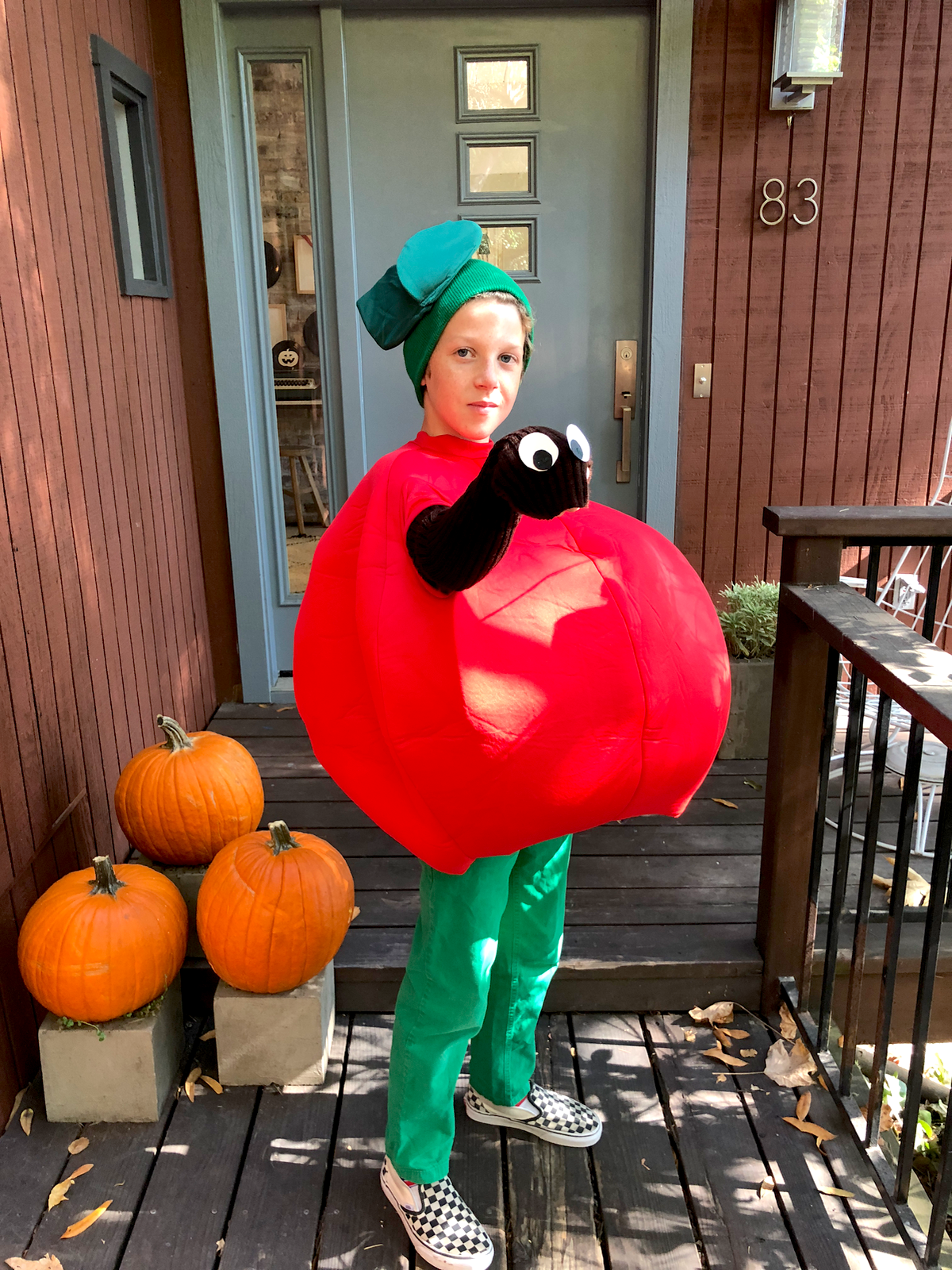 I’m so grateful for our Halloween events over the weekend so that I could capture these images and help the kids finish their costumes before I left to Australia. I always love seeing the Halloween costume ideas my kids come up with. Gosh I miss them.

How about you? What did your kids dress up as this year? Do you like to make costumes? Order something? Do you do family themed costumes? I’d love to hear!

P.S. — All our costumes from earlier years. 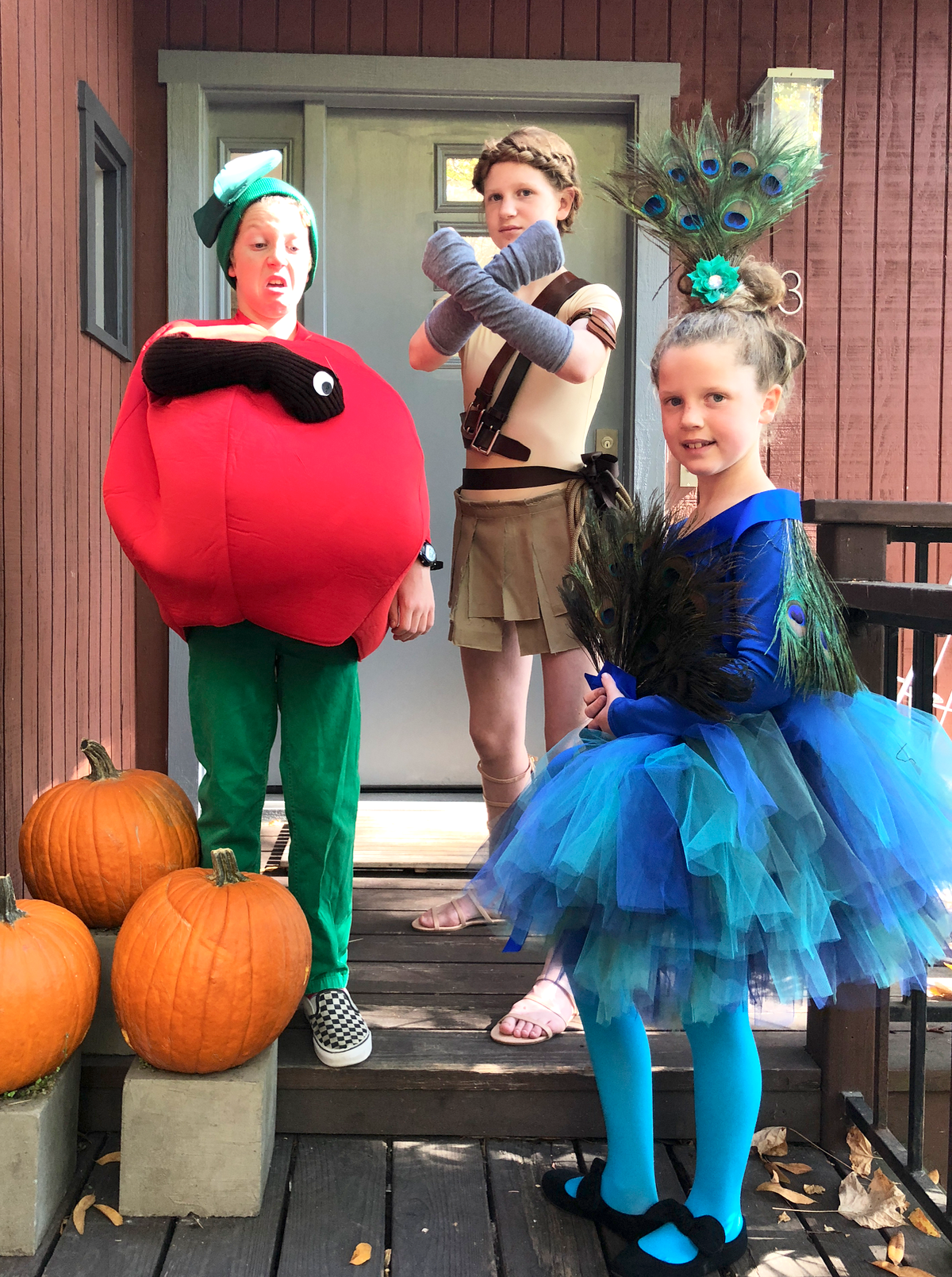