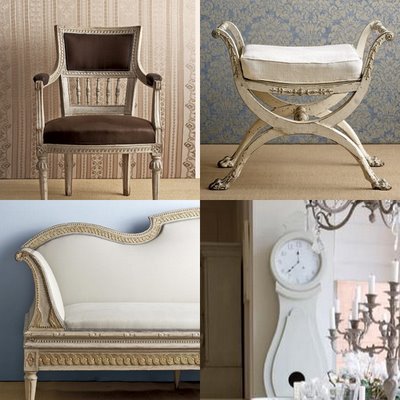 One of my favorite styles in interior design is the Gustavian style. (Quick history lesson: the style was named for King Gustav III, who ruled Sweden from 1771 to 1792, and the trend lasted about 30 to 40 years after his death.) Picture light-filled rooms with no rugs on the floors and bare windows. It may sound bleak and cold, but rooms inspired by the Gustavian period and the Swedish lifestyle are some of the warmest and most inviting I’ve seen. The colors of this period are creams, whites, blues and grays. With darkness covering Sweden for most of the wintertime, it’s no wonder that, for centuries, the Swedes have filled their homes with light and remembrances of summer sunshine. This classic Swedish look is also characterized by hand painted furniture, large, curvaceous clocks, and neoclassical shapes. 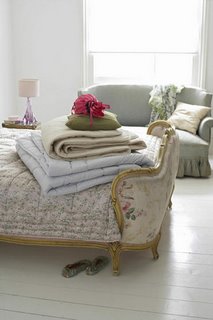 Because the style is so classical, it appeals to a large variety of decorating tastes, from period-influenced traditionalism to urban/modern. My taste hinges on the more traditional Gustavian style, but this post, at Desire to Inspire, showcases a home which perfectly translates this Swedish look into a contemporary family home.

What do you think?