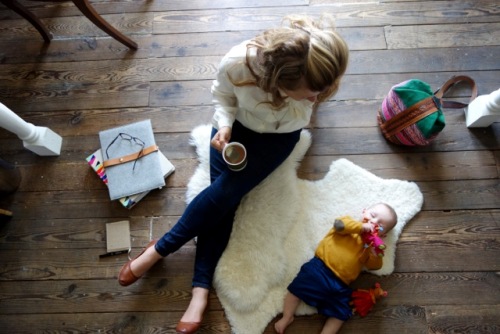 Tara’s company that she and her husband co-founded, Knowmad Adventures, was born from the idea that travel makes us all better people. I would suggest that babies do the same exact thing!

In total seriousness, running a South American travel company that specializes in authentic adventures is probably one of the best training grounds for parenthood, don’t you think? Unpredictable climates, crazy eating habits and sleep patterns, a continually changing and ever inspiring landscape, and daily excursions that leave your heart beating like nothing else in the world…

Yep. That’s parenthood. Friends, please help me welcome Tara as she shares the story of her favorite adventure yet.

Q: Tell us about the moment you first learned or suspected you might be pregnant.

A: Well, it actually took me over six weeks to realize I was pregnant. Trey was conceived on a trip to Patagonia and the Atacama Desert in Chile. We spent a little over a month there researching luxury lodges (real rough!), and the day after we returned I hopped a flight to New York for a college friend’s wedding. Needless to say, I’d been on the run so I kind of forgot when I was supposed to get my period. When I realized I was late, I figured it was because my body clock was messed up.

Finally I got worried enough to take a pregnancy test and I literally thought to myself “I’ll take this so I stop worrying and it’ll start tomorrow.” That big, purple plus sign proved that theory wrong!

Jordan, my husband, wasn’t home. As soon as he walked through the door, I told him to sit down and that I had something to tell him. He guessed it from that and paced around the house saying “It’s a miracle!” We took the next day off, got breakfast together, and tried to let the news sink in. I think it took me until month five before I was over the shock, however.

Q: What were your favorite parts about being pregnant? And least favorite? Also, tell us about the challenges of managing a growing baby and a growing company!

A: I loved eating whatever I wanted to. Old fashioned donuts were a real weakness, along with macaroni andcheese and, of course, ice cream. I’m still battling with that ice cream addiction.

I hated not being able to horseback ride, ski, bike, and do all those active things. It made me really appreciate what a positive impact they have on my day to day. I found it challenging to find good stress release in their absence, and apparently turned to sweets!

Running Knowmad Adventures, the South American travel company that my husband I founded five years ago, while pregnant was also a challenge. My first concern was for our baby’s health. We had had a trip planned to Peru to trek to the Incan ruins of Choquequirao a week after we found out I was growing a little bebito inside. It consisted of four days of intensive hiking in high altitude. I was still in my first trimester and my doctor assured me that it would be fine (fetuses live in an oxygen-less environment in the beginning anyhow), so I did it.

It was physically more demanding than I had thought it would be and I was absolutely worn out after, but I don’t regret it for a second. It gave Jordan and I some time to disconnect, to reflect on the change that was to come in our lives. We were able to nurture the really beautiful, tender bond between us that, trust me, as a couple you really need to fall back on in those first sleepless months after the baby comes.

I also can’t wait to tell Trey about all the places he had already been before he was even born! By chance, I had just started collecting sand from each place in glass bottles on the trip to Chile, and so now those can be his.

However, back at the office after the Peru trip, I pretty much freaked out. The due date became a looming deadline. I had a website to design and a million projects to delegate and get off my plate in an effort to carve out a maternity leave for myself. We managed for the most part, although I was still doing some weekly accounting right after he was born. I was really envious of my friends that worked for corporations and got a clear cut paid maternity leave. When he was three months old though, I thought of them having to return to work all day, five days a week, whereas I was able to be more flexible at that point and gradually increase my hours as they worked with Trey’s schedule. I felt very grateful for our situation then.

Q: How did you prepare for your delivery? Take us through the day (or night!), and be sure to include your best and not-so-best moments!

A: I was more or less a possessed nester. My background is in art and design so, naturally, I thought decorating our house was an utmost priority. We painted eight rooms in our house before Jordan refused to do one more. So I wallpapered the nursery.

I organized every closet and every cupboard. It was cathartic and made me feel prepared, but truthfully I was really scared for delivery. My mom had broken her back and pelvis in a ski accident, and my sisters and I had been c-sections so she couldn’t really ease my fears. And my aunts comforting words were basically “Don’t worry about it – it’s so painful you’ll forget.” Which, in hindsight, is true but not really what you want to hear!

My water broke movie-style early on a cold December morning. Jordan was already at the office and so I called him, but he didn’t answer. I had to text him then that my water broke because I wanted to call the hospital right away. Of course then when he called back I was on the other line and so he raced home, dropping his phone in a snow bank and breaking it!

We spent the rest of the day at the hospital waiting for labor to start, but my contractions wouldn’t come. Finally they induced me at 7pm and it went from zero to sixty like that! I labored for five hours before requesting…no…demanding an epidural. After that, I honestly took a nap before I was dilated enough to push.

After four hours of pushing, our precious baby boy came into the world at 6:34am on December 10th. It was a precious, precious moment.

Q: You and your husband are successful business partners in high-actions, high-stress situations. Was that a good training ground for becoming parents?

A: Yes and no. A baby is so much different than a business. You can’t approach constipation issues like you would finding a good web programmer. But I think we had already developed a great admiration for each other’s endurance and strength and a real teamwork mentality, which helped.

Q: How has your baby merged into your life?

A: Trey, in a way, has helped us a bit with our work life balance. We had a real problem letting Knowmad seep into every aspect of our lives. I actually had to make a rule once – no business in bed – so we wouldn’t talk about it until the wee hours of the night. I really wanted to be present for Trey when I was with him, every moment of everyday. So now there is no (ok, minimal) checking email at home, and we try to leave Knowmad at the office as much as possible.

The adjustment for me of being so homebound has been hard, though. Minnesota just survived the worst winter in over 30 years with over 55 days below zero. There were literally weeks where it just wasn’t worth it to spend the half hour it took to preheat the car, get all packed up and bundled for an excursion even to a coffee shop.

Nor had I spend so many consecutive months Stateside in a long time. I’m nursing and pumping wasn’t really working for me enough to leave Trey. Besides, my priorities had really shifted and I really just didn’t want to leave him anyway. So Jordan has done all the traveling for Knowmad this year, and I played single mom in the meantime. Single moms out there – you absolutely rock this world. It is tough.

Luckily, we’ve had so much help and support from family and friends. Countless meals were dropped off, grocery runs made, the dishwasher emptied, diapers changed, sidewalks shoveled…the list goes on and on. It really does take a village and we are so thankful.

Q: Please finish the sentence: I feel like a mom when I…

A: I feel like a mom when I realize I haven’t worn high heels in over a year!

Tara, thank you so much for your story. Your experience is so unique, and I know you’ve inspired readers out there worried about balancing their old, adventure-laden life with a bit differently paced trip that includes a baby.

I read your blog post on motherhood, Tara, and I especially love this: “Admittedly, the days of traveling to foreign, Latin American lands seem so far, far away. But even though every day brings new challenges, I literally wouldn’t trade motherhood for the world. Every morning that our baby boy wakes us with his perfect smiles and delighted coos I’m reminded that this is the trip of a lifetime.”