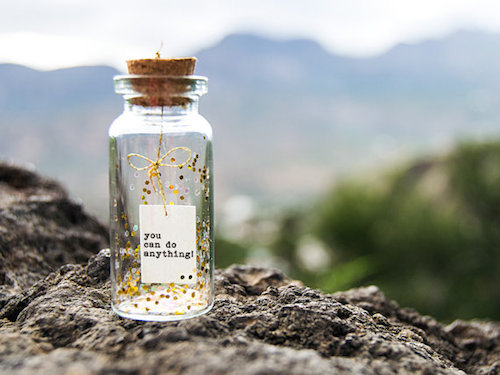 By Gabrielle. (How cute are these Cocospots messages in a bottle?)

Julia’s notes to me were a hoot from the get-go. She’s the mom of six lively children, ranging in age from 12 to one, who “foolishly added a puppy to the mix this Christmas, which has been more difficult than having a newborn…because you just can’t put a diaper on a puppy!” She is also in the process of building her family’s forever home: a farmhouse sitting on 17 acres out in the country. When pressed, Julia admitted that her version of country is five minutes from the freeway! See what I mean?

You can imagine her account of her sixth delivery is equally humorous, so please settle in and enjoy her with me. Welcome, Julia!

All my other kids have either been born right on time or a couple days early, so when my sixth baby’s due date of December 27th came and went, I was both relieved — as we’d successfully avoided being in the hospital on Christmas! — and completely horrified. You mean this could go on for days…weeks, even?

It just felt like my body was not getting the memo that it was SUPER pregnant and needed to kick into gear. Every day that went by, I was a total messed up, sobbing ball of emotions: worried, frustrated, tired, uncomfortable, insert any negative emotion you can possibly imagine. But even with all that, I really didn’t want to be induced.

Don’t get me wrong; I’m no natural mama. Give me an epidural or give me death! But I just really wanted him to come in his own time. So even though he was overdue, he wasn’t in the two-week-overdue danger zone or anything, so I figured he just wasn’t ready yet.

On New Year’s Eve, my doctor called and gave me a take-it-or-leave-it offer. She had procured one open bed for me at the very busy hospital, and I could be induced the next day if I was so inclined. I thought about it — this could be my ticket out! — but ultimately turned her down. She sounded surprised, which made me instantly second-guess my decision. When I told my husband, Logan, he sounded really surprised at my answer as well, but said he would support whatever I wanted to do.

A little while later at dinner, I could tell he was mulling something over, so I asked him what was up.

“I’m just still thinking about the inducing thing,” he said. “It would be so nice if the baby came this weekend when I have time off. Next week, work is going to be really busy and stressful.”

As we were discussing back and forth, Jane, our seven-year-old who was sitting between us at the table, cut in:

“Just let the baby come, Dad. Mom’s the one who has to be pregnant, so she should get to do it how she wants.”

And then I shot my husband a look that basically said, “The second grader gets it. What’s YOUR problem?”

No, I’m making him sound like a jerk, when in reality, he was incredibly supportive of however I wanted the whole thing to go down. In fact, later that night, as I was having my now-regular sob-fest over the bathroom sink, Logan hugged me and said that maybe the next day I should just go on a long walk and see if I could get labor started.

We live in the Northwest, where January and long walks don’t mix. “Where will I walk? It’s all icy outside,” I said.

“We can take the kids to the church building and they can all play in the gym while you just walk around the halls for as long as you want to.”

For some reason, this idea and this “we’re on the same team” feeling from Logan made me feel so much better. So New Year’s Day, that’s what we did. I walked around that building for almost two hours, almost non-stop. When I wasn’t walking, I was jumping off the stairs. Not kidding. (Only two stairs up. Don’t worry.) My sister-in-law Annie walked with me for a long time, and I called another sister-in-law, Tavia, for an overdue baby pep talk. It was all so comforting.

Well, lo and behold, around 7:00 that night, I started feeling inklings of contractions. I kept myself busy tidying the house and doing random chores because I was terrified that if I sat down and relaxed, the contractions would stop. They didn’t stop, but they were fairly inconsistent and not all that painful. It wasn’t until 10:45 that I started keeping track of the frequency of my contractions, and not until 11:15 that I really started paying attention to their duration. By that point, they were about three to five minutes apart, 45 to 60 seconds long, and almost bringing me to tears. As soon as my mom got to our house to stay with the kids, we headed out the door, probably around midnight.

This whole pregnancy, I had been telling myself that I wouldn’t wait too long, that I wouldn’t try to be a pioneer woman and agonize as long as I could at home until I went to the hospital. And I didn’t think that’s what I was doing; the contractions just weren’t that intense for a long time. But when they got intense, it was like GAME OVER, runaway-freight-train territory.

We checked into the hospital and I got in my gown and climbed onto the bed. As the nurse started asking me the routine questions, I had a contraction and grabbed onto Logan’s arm to have him help me breathe through it. The nurse was like, “You know, I’m just going to check how far along you are and do the questions later, because if you just had to breathe like that through a contraction and this is your sixth baby, I’m thinking you might be getting pretty close.”

I wasn’t terrified, but I knew that I’d better get that epidural pretty quick or it would be too late. The anesthesiologist came in soon after, but things were progressing so fast that I was in complete pain and misery and the epidural couldn’t really touch it.

This childbirth experience was instructive, in that it gave me a glimpse into how I would react in a really painful, stressful situation.

And the verdict is: I would be a disaster. 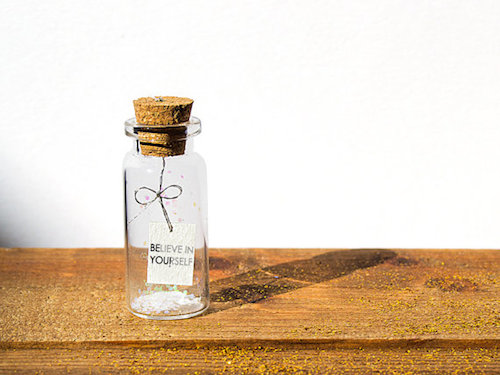 So anyway, I was in utter childbirth meltdown, pushing and screaming and doing all the things you see in movies and just think they’re really overacting the scene, except now it was 100% real. My eyes had been closed through most of the intense part of labor — helping me focus, taking me away to a happy place, I don’t know — and then a nurse said, “Don’t stop! Don’t stop! Look, Julia!”

And I opened my eyes, and a couple seconds later, little baby Hyrum was born. I think I yelled a little bit, maybe even screamed when I saw him, and then they put him right up on my chest, and I was just euphoric. Sobbing, sobbing, sobbing, holding my newborn baby, feeling his soft, warm body right next to mine, smelling him, touching his head, looking at his little face that would forever be a part of my life. After a minute, I reached over for Logan’s hand, and he was crying, too.

Heaven, I tell you. Absolute Heaven.

Julia, thank you so much for the laugh! “This childbirth experience was instructive, in that it gave me a glimpse into how I would react in a really painful, stressful situation. And the verdict is: I would be a disaster.” Julia, I believe in you! I don’t think you’d be a disaster, as long as you get a reward like Hyrum at the end of it all!

Does anyone else ever wonder how they’d do on a survival show? I have a friend who could totally thrive for a month in the most rustic, basic situation…as long as there aren’t any bugs or crawly night creatures involved! What do you think? Could you make it, or would you be a disaster?