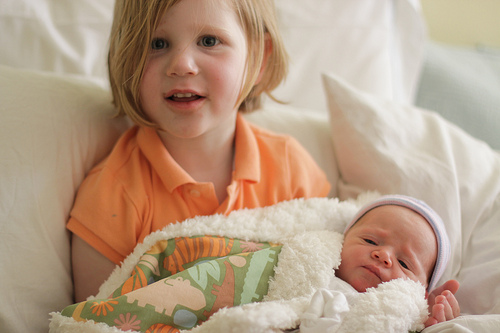 I originally posted Jenny’s first birth story way back in 2011, so it’s really a lovely feeling to welcome her back with another! She experienced a completely different type of birth the second time around, so this is nowhere near the same story, second verse same as the first! For her first delivery, she was adamant on a natural birth. This time? Why not try an epidural? I love how easy she was on herself.

It’s fascinating to me how we place all these expectations on ourselves to somehow conquer a multitude of personal goals when it comes to the birthing process. Delivering a baby is tough enough, wouldn’t you say? I would, too! Please enjoy Jenny’s words and sweet experience. Even if you’re not having a baby anytime soon, it’s pretty wonderful advice.

My second pregnancy and birth experience was a complete 180 from my first. I’m honored to have my son Nolan’s birth story featured on Design Mom, and when I reread it before sitting down to write this one, I was reminded what a difference a few years make.

In March of 2013, my husband Matt and I finally decided to sell our house on Long Island, a house that never quite felt like home to us. We lived there for five years, and I was itching to leave after a year or two.  We were fortunate to have a very successful open house and after a few days on the market, the house was sold! The morning after that exciting news, I took a pregnancy test and it was positive. While I really shouldn’t have been surprised, I was stunned.

I was so stunned that I didn’t tell Matt right then. I think because I had pushed him into selling our house, I felt like I was bombarding him with major life changes. I was actually worried he was going to be stressed or upset. So instead of telling Matt, I packed up our two year old, dropped him at daycare, and spent my workday in a fog.  I might have been teaching Lord of the Flies to my high school students, but all I could think about was, “Oh my God I’m pregnant and we just sold our house and now we will have nowhere to live.”

Later that day I nervously waited for Matt to come home from work. We stood in the kitchen recounting our days and I silently mouthed, “I’m pregnant” to him while Nolan chatted away obliviously next to us. Needless to say, my nerves were unwarranted. He was very excited and not panicked like I was. But that’s when the real insanity began. Over the next few months, we packed up our house, put most of our belongings in storage, moved in with my parents, looked for a new house, found a new house, renovated that house, and moved in a few weeks before baby number two arrived.

Having so much upheaval and change while being pregnant is not ideal. In addition to managing the stresses of packing, moving, house hunting, etc. I lost a lot of that time to sit back and be excited about the baby. During my first pregnancy, I could tell you in an instant what fruit or vegetable was comparable to my baby’s size. This time around I frequently forgot exactly how many months along I was.

With our older son, I delivered at 38 weeks and I was fully prepared for an early delivery with this one, too. When weeks 38, 39, and 40 crept by, I sort of stopped believing I was even going to have a baby and started pondering what it would be like to be pregnant forever. On my due date I ran some errands, and when the cashiers at Home Depot and Target asked, “When are you due?” there was a mix of horror and disbelief when I answered them, “Today!” You mean not everyone buys a new mailbox and picture hooks on her due date?

With both pregnancies I opted to use a midwife instead of an obstetrician, which in our area is kind of unusual. I was determined to have a drug-free birth with our older son, Nolan, and I felt more confident that could happen with a midwife. As my second pregnancy progressed, many people asked if I was planning on going drug-free again. I assumed I would, but there was this nagging question in the back of my mind…why? When I was pregnant with Nolan, I had a dozen reasons (good ones!) why I wanted a drug-free birth. Now I couldn’t come up with many. I started to feel like my desire for an unmedicated birth this time around was more ego-driven, like, “Well, I did it once without the epidural, so I guess I should just do that again, right?” I decided I would wait and see what I wanted to do in the moment.

In the early morning of November 17, five days after my due date, I woke up with some sharp cramping, and I thought I felt the tiniest little drop of something. Pee? Water breaking? My imagination? I got out of bed and stood up and that’s when my water broke. My first thought? Eeeek! Get off the rug! With my first baby, my water didn’t break on its own, but this was like what you see in the movies. It felt like pee falling out all over the floor and no amount of kegels was going to stop it.

I woke up Matt and called my midwife.  At this point it was 3:30 in the morning and I wasn’t having any contractions. She recommended we get Matt’s parents over here to stay with Nolan and said I should get in the shower. “Second babies can come faster!” she warned. My labor with Nolan was nearly 30 hours from start to finish so I wasn’t too worried. By the time I got out of the shower the contractions had started and they were already three minutes apart. Ok, so maybe the midwife was right…

After Matt’s parents arrived, we headed to the hospital and by the time I got checked in it was around 6:00 am. The contractions were non-stop. They were coming a minute apart and lasting for close to a minute, so I had no break. My midwife Michelle examined me and said I was four centimeters (curses!) but tried to soothe my nerves by reminding me that I hadn’t even been in labor for three hours. After another hour or two, I felt at my breaking point and asked to be checked again. I was still four centimeters. And that’s when I asked for the epidural! Little did I know I would have to wait close to another hour because I hadn’t had any IV fluids since my original plan was no drugs.  Apparently you need a bag of fluids before the anesthesiologist can give you the epidural (more curses!).

When I finally got the pain medication, it was nothing short of heavenly. I was smiling! I was laughing! I could unclench my fists! Really lovely. I said to Matt, “I hope I don’t dilate too much because I could really use a nap!” Well, that was not in the cards for me. Less than an hour later I started to feel the telltale time-to-push feeling: bowling ball in your bottom. I actually said, “Oh no! I think I have to push!” Michelle examined me and I was right. Go time!

Let me take a moment to recap my pushing experience with Nolan. It was for nearly three hours in excruciating pain. His arm was kind of stuck up over his head, so it took forever for him to pass under the pubic bone and make his way out.

Because I had the epidural, I had so much less pain from the contractions that I could really feel how and when I needed to push. It obviously still hurt but I think my pushing was more efficient and effective. Only a few pushes underway, Michelle said, “Ok just a couple more!” In my head I thought, “No way. Don’t mess with my head, lady!” But she was right. In less than ten minutes, Will Henry was here.

Four months later and life is great. Motherhood feels easier, and I’m much more confident and relaxed. Of course part of that confidence comes from the experience of having done it once before. More of my assuredness is rooted in the idea that everything is normal and what it is supposed to be. If he’s up a few nights in a row? It will pass. If he’s distracted while nursing for a day or two and pulling all over the place? It’s temporary.

My message to friends after giving birth both with and without drugs is do what you want! I don’t regret skipping the epidural the first time around, and I’m not disappointed I got it this time. More than anything, I’m grateful I’ve had two healthy babies.

“More than anything, I’m grateful…” Thank you, Jenny, for those simple five words that I will enjoy repeating here and there and whenever I remember. If you only helped one of my readers ease up on her expectations today, that’s pretty worthwhile!

What does everyone think? If you’ve been lucky enough to experience more than one birth, were you more lenient on yourself the second time around? (Over my six births, I ended up trying a mix of everything!) Or did you feel compelled to prove something to yourself, and push harder in a direction that scared you? Oh, you know I always love your stories!