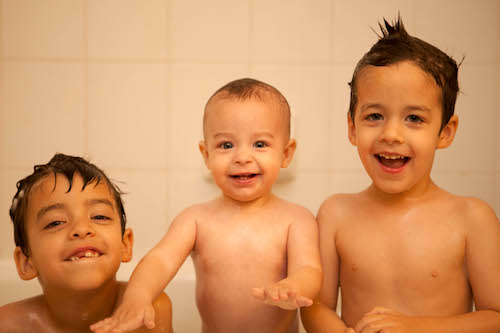 I think most people are a little scared of morning sickness. It can leave us feeling like we’ve just run two marathons in a row, when all we’ve really accomplished is a feeble walk from our bed to the couch. It can surprise us during an important meeting with the realization “Huh. The smell of paper makes me vomit.” And then one day, it packs up and leaves and we forget all about the ghastly beast that interrupted our well-being for a few weeks.

It was the Christmas of 2007 and the smell of the homemade tamales, a holiday tradition in my husband’s family, made me feel a little queasy. A few days before I had had a similar reaction to another food. We both decided it was time to take a pregnancy test since we had been trying to conceive. And, no surprise, we were pregnant!

I had felt off here and there for a couple of weeks, but sort of relished in this tangible sign of the of the life inside. Somewhere around nine to 11 weeks, the morning sickness turned into all day, all night sickness. I was sensitive to any food or human produced smell. I had a hard time eating anything and was using all of my energy to stay hydrated and keep up with my duties as a graduate student at the local university. On top of the constant nausea came the frequent bouts of vomiting – typically six to ten times per day. At the peak of sickness, even the sight or thought of food was enough to trigger it. I learned a lot about throwing up: what was least offensive coming back up, how awful it is to vomit bile…you get the picture.

I mentioned the sickness to my doctor who had noticed weight loss. He decided to monitor my weight and prescribe some anti-nausea medication. It didn’t work so I steered clear of it. I kept losing weight, but I tried not to complain. I truly thought that it was only slightly worse than what millions of other pregnant women experience. However, I adamantly swore, mostly mid-vomit, that this would be our only child! Somewhere around 20-24 weeks I started to feel a little better and I thought I was in the clear until my 26th week. I felt the nausea rising and knew that I had to get to the bathroom quick. As I walked there I passed out and fell directly onto my belly. Fortunately, my husband was in the room and we headed straight for the ER where we spent the day monitoring the baby. Did I mention this happened to fall on our first wedding anniversary!? Our first baby boy arrived a few months later and almost instantly I had infant induced momnesia, where you forget just enough to want to do it all over again!

When we started trying for our second child, we fully expected this pregnancy would be easier. While we were on a family vacation our soon-to-be second son made it very clear that it would not be any easier. He was a fire-cracker even then! It was so early a test would not have been able to confirm the pregnancy and I was already terribly sick! This time there was no gradual increase of intensity that my first pregnancy had; it went from zero to ten quickly and stayed there. This time around we had a two-year-old to care for, as well.

At only five weeks along I was begging my doctor for stronger medication in hopes that I could keep caring for my son. None of it was working. By this point, I had talked to other mothers and realized that what I had experienced the first time around and what I was experiencing now was not typical morning sickness. With the little energy I could muster, I did a quick internet search and came across something called Hyperemesis Gravidarum.

Hyperemesis is severe nausea and vomiting during pregnancy accompanied by weight loss, electrolyte disturbance, dehydration, malnutrition, etc.. Many people will recognize it as the illness Kate Middleton has while pregnant. Many cases go undiagnosed because women don’t know that what they are going through is anything other than expected, and many doctors either don’t recognize or don’t treat it properly. It is difficult to convey how nauseous you feel — you can’t measure it like contractions, for instance. Instead, diagnosis is dependent upon other symptoms like weight loss and dehydration.

While I was not excited by the reality of having Hyperemesis, I was comforted by the fact that there was a name for this and it was not all in my head. I would not wish this illness on anyone. However, I did find comfort in the fact that other women and families had weathered the same storm…and survived. Upon gathering more information, both clinical and anecdotal, I knew that since medication was unsuccessful we needed to try hydration therapy.

The highlights of my second pregnancy include: two hospital stays, a 20 pound weight loss, PICC line hydration and vitamins to keep the baby healthy, constant nausea and frequent vomiting despite treatment, a possible PICC line infection, my equal partner becoming my caretaker, and a repeat performance of the passing out, although no anniversaries were harmed this time around. Worst of all, I had to relinquish the full-time care of my son to others.

It was ultimately the best and safest choice for my son. Fortunately, we have a very supportive family who took over the job of parent so that my husband could continue to work. We are eternally grateful to the help and care they provided, especially my father-in-law who moved from another state to be the primary caregiver. Regardless of our gratitude, admitting that I could not be a mother to my son was the hardest thing I have ever done. It felt like an impossible choice; be a mother to the baby inside of me or be a mother to the baby outside of me.

I spent the majority of my days alone in bed with my IV and Netflix while life went on about me. I learned quickly the overwhelming feelings of shame, guilt, loneliness, and depression that come with Hyperemesis. Things like this would run through my head: Why can’t I just push through this? Is it all in my head? What milestones or sweet moments am I missing with my son today? Will my marriage survive this? How will it look after this? What if we lose this baby? How would we ever overcome that? What if the baby is unhealthy because I can’t give him what he needs? What if we lose this baby? Would life go back to normal? Would I be able to cuddle and play with my two-year-old again?

The last one always hurt the worst because this baby was so very wanted and loved. I would feel it in the depths of my loneliness and on really hard days. I had to constantly remind myself that all of this was temporary. I would try to reserve as much energy as possible to hug and kiss my two-year-old before bed — after bath, of course, because let’s be honest: little humans don’t always smell sweet! — without getting sick in front of him. I would pray that that those tiny moments of big effort were enough to suffice.

If you can believe it, we willingly signed-up for round three! I know, so many people can’t understand it, but when I look at the faces of my three sons I can’t fathom one of them missing. The third time around we were very realistic in preparing: arranging childcare prior to even attempting to get pregnant, knowing that we would exceed our insurance deductible, hiring someone to clean the house, etc. Fortunately, my third pregnancy was more like my first so it was not as physically hard. The doctor opted for peripheral IVs this time around, which meant I was poked every three days or so and looked like a pin-cushion. I had learned to get to the ground when I felt faint or severely nauseous, so I didn’t fall when I passed out this time. An improvement!

I have been blessed with easy deliveries for all three of my boys. I have been able to deliver each of them naturally without intervention. I consider it a gift after all of the interventions that are necessary during the pregnancies. Maybe my body is so cooperative because it knows it won’t be pregnant anymore! While on the smaller side, our children have arrived mostly unscathed by all of the tumult that accompanied their growth.

The realities of being pregnant make adding to our family a hard decision. Apart from logistics, my husband and I have learned to keep a sense of humor about things. It lessens the strain Hyperemesis puts on our relationship. I often joke that the only way I get a break around here is to get pregnant, or if I want to lose a few pounds I tell him to knock me up again. We have found that smiling and laughing can help diffuse the fear and anxiety. Once that happens, we can focus on the blessings that come from the sacrifice.

As a mother, I have to make a conscious decision not to parent from the guilt of the things we missed as a family while I was pregnant. It doesn’t do any of us any good. We remind each of the boys exactly what we love about them and how important they are to our family. At the end of the day, my husband and I have never wavered on the importance of us giving them each other.

Oh, Erika! You are a trooper with her eye on the prize, aren’t you? Three prizes, to be exact! I’m happy everything worked out well, including your relationship. Hardships like this do tend to strain an otherwise strong relationship, don’t they?

Who else has been affected by Hyperemesis Gravidarum? I bet it’s hard to have a condition like that, and have well-meaning people offer up remedies that worked for them! Or reassure you that it’ll all be over in a few weeks, or even suggest you’re over-reacting! Oh, that would be tough. If you’ve got your own experiences to share with other readers, please do! You know I love what you have to say.

(Hyperemesis is real. If you or someone you know is struggling with Hyperemesis you are not alone. HER Foundation is a great resource for women, friends and family, and healthcare professionals.)